I must admit that until recently I was unaware of this group, but I've undertaken a project that might be of interest to the members. I'm a commercial photographer in Atlanta, with a specialization in Aviation. Over the holidays I began photographing WWII "bomber jackets", or as they are more properly known, A2 jackets. I'm specifically seeking jackets with hand-painted artwork, preferably on both sides, from the WWII period. The present condition is irrelevant. All who participate will receive a free print of each side of the jacket for their efforts.

The eventual goal is to create an exhibition (with life-sized prints), a book, or both.

Additional details, including my contact information, can be found here: http://aerographsblog.com/wordpress/?p=1457

Please feel free to contact me with any questions you may have...

by the way, welcome aboardddddddddddd
S

welcome to the abusement park.

WELCOME TO THE BOOBY HATCH!

I think this is a great idea, and a traveling exhibition would be very cool to see. Wish that I owned more painted originals, as I would love to participate, but I do wish you all the best luck with the project, from one artist and artisan to another.

Thanks so much. The project has received some good, actually great response so far. Will keep everyone posted as to progress…

Great idea. .....looking so much forward to the result.

Back with an update. To date, 29 jackets have been photographed, including 7 in June at the National Naval Aviation Museum in Pensacola, Florida, and just last week, 13 more were photographed at the Smithsonian National Air & Space Museum in DC. While I'm still processing the images from last week, 16 are posted to my website, and can be seen here: http://aerographs.photoshelter.com/inde ... IwSfHDZ.GQ

I hate to be picky, but they're called "flight jackets". Bomber jacket was a term coined by civilian makers after the war.

Sorry for being so "type A".
D

In addition, how many G-1s were WWII issue?
Dave

Stony said:
I hate to be picky, but they're called "flight jackets". Bomber jacket was a term coined by civilian makers after the war.

Sorry for being so "type A".
Click to expand...

I do agree with this, despite it seeming incredibly pedantic! 'Flight jacket' is a far better term, particularly when you consider not all the jackets were even worn in bombers.

What an absolutely fantastic project. Your photos are terrific John - please keep us updated on your progress! And be sure to get as many photos of other WW2 jackets - there's some B3, B-6 and D-1 shearling jackets which all have fantastic artwork on them.
D

Stony, Have not been back. I don’t collect like I did now that I retired. Linda said, “...well, we could go back” so we’ll see.
Dave

John;
Have you been to the National Air Force Museum at Wright Patterson AFB, in Dayton Ohio?
If not, there are a plethora of painted jackets at that location. Check out this thread just to see a few.

Stony said:
I hate to be picky, but they're called "flight jackets". Bomber jacket was a term coined by civilian makers after the war.

Sorry for being so "type A".
Click to expand...

I think correct nomenclature is important. The B-3 is probably the closest piece to the term “bomber jacket” because they were designed for higher altitude flight and colder ambient temperatures. I prefer “flight jackets”.

Hello Gents!
A very busy schedule prevents me from being on here more often, but I thought I'd offer this update.
Just finished the last of the photographs for the book, which will go into production ASAP, with a projected publication date of 1 July, 2022.

Not quite two weeks ago, I was admitted into the archives at the National Museum of the US Air Force at Wright Patterson AFB in Dayton, Ohio, and photographed 10 jackets.
Mind you, these were not just any A-2's, but a hand-picked selection, including:

​
Jimmy Stewart...yes that Jimmy Stewart​
Thomas C. Griffin, Doolittle Raider​
William N. Alsbrook, Tuskegee Airman in the 99th Pursuit Squadron of the 332nd FG​
George R. Bailey, David L. "Tex" Hill, and John T. Donovan...they all wore the same M422 jacket in the original Flying Tigers, otherwise known as the American Volunteer Group​
Philip M. Rasmussen, pilot who got off the ground to down one Japanese plane during the Pearl Harbor attack​
Evelyn Ordway Peterson, Flight Nurse in the Pacific​
Hub Zemke, multiple ace in the European Theatre​
Jay Zeamer, Medal of Honor recipient in the southwest Pacific​
Hess Bomberger, P-51 pilot in England and local Atlanta resident​
Max L. Markman, B-24 crewman in the PTO with cool "Flying Circus" artwork​
​
​
I'm hesitant to post any images, as a number have already been "appropriated" from various sources, and are now appearing worldwide on various unpaid-for websites. You can see a few that have been photographed at my regular website, www.johnslemp.com, and a project specific website at www.wwiibomberboys.com.

​
I'm giving a Zoom presentation on Thursday evening to a local photo club, and all are invited. While a few jacket images will be shown, for the most part the presentation will be about the "back story" of the project...how it came about, where it has led me, people I"ve met along the way, a bit about the photo techniques used, and where it is all heading. Be patient at the start, as I'm sure there will be photo club business to attend to.

As to the comments regarding the use of "bomber jacket" versus "flight jacket"...I get it, but have to gently disagree. This book is meant for the general public, and as such, they don't know the difference. Since it's all been self-financed to this point, I'm gonna keep using "bomber jacket" as the general descriptive term, and the majority of potential buyers will know what that means. Soon it will be all about selling books.

To that end, it anyone would like purchase a book at the pre-publication price, go to www.wwiibomberboys.com to get yours now. Once they are published, the price will increase approximately 20%. By the way, 149 jackets have been photographed to date. Included will be chapters on preservation by a professional conservator, a chapter on how these jackets have influenced fashion design worldwide by a fashion historian, and a discussion on collecting jackets, by someone who knows much more about that than I do.

Hi John, thanks again for the heads up.

Its a wonderful project and well-worth supporting (even though I have to agree with the comments above regs 'bomber jacket' - cringe).

I will email directly as I want to know what postage will be 'on top' to the UK.

Best of success with the launch!

Unfortunately, there is no label in the AVG jacket, but having shot a few at the National Naval Aviation Museum in the early stages of the project, it's indeed a "Navy" type M422 jacket. I'm afraid I don't know the difference between a 422 and a 422a, however.

As it turns out, my Partnership Strategist is a lady with lots of experience in marketing for racing teams...and she has a good friend who has been involved in racing for decades in the UK who is also jazzed about the project. Turns out as a child he knew some pilots who flew in the Battle of Britain, and he's been keenly interested in WWII aviation history ever since. We'll probably send a good number across the pond for sale at the Duxford Museum (hopefully!), so please keep in touch, as you may be able to save a few quid on shipping.

Thanks so much for your kind comments, and I look forward to hearing from you.

John, I certainly will.

I'll reference this post in the email, thank you.

There are not many differences between the M-422 (1940) and the subsequent M-422A (1940-43). Theres an entire thread on the forum, very well researched and written on the evolution of the USN flight jacket, from the initial M-422 (likely what the AVG received), all the way through to modern G-1s, and everything in-between. Well worth a read.

INTRODUCTION There have been various threads on VLJ which have listed the US Navy contracts from the M-422 to G-1 series of leather flying jackets. This thread is an attempt to pool the information into a beginners guide to sit alongside the A-2 contract dates thread as a resource on the Forum...

Tex Hill's jacket is interesting.
The colour pics are clearly of an M-422A - One clear identifier is the stitched seam on the left pocket. Not all M-422A's had one, but most seemed too.
The b/w pic does have a pencil slot, but no stitching, so this could be an M-422.

The colour pics look like a Gordon & Ferguson, due to the seam in the left pocket and the slightly pointy collars.
I wonder, were the patches removed and placed on another jacket (colour pics)...
All conjecture of course and why it might be said, we are a bit jacket OCD on this forum. 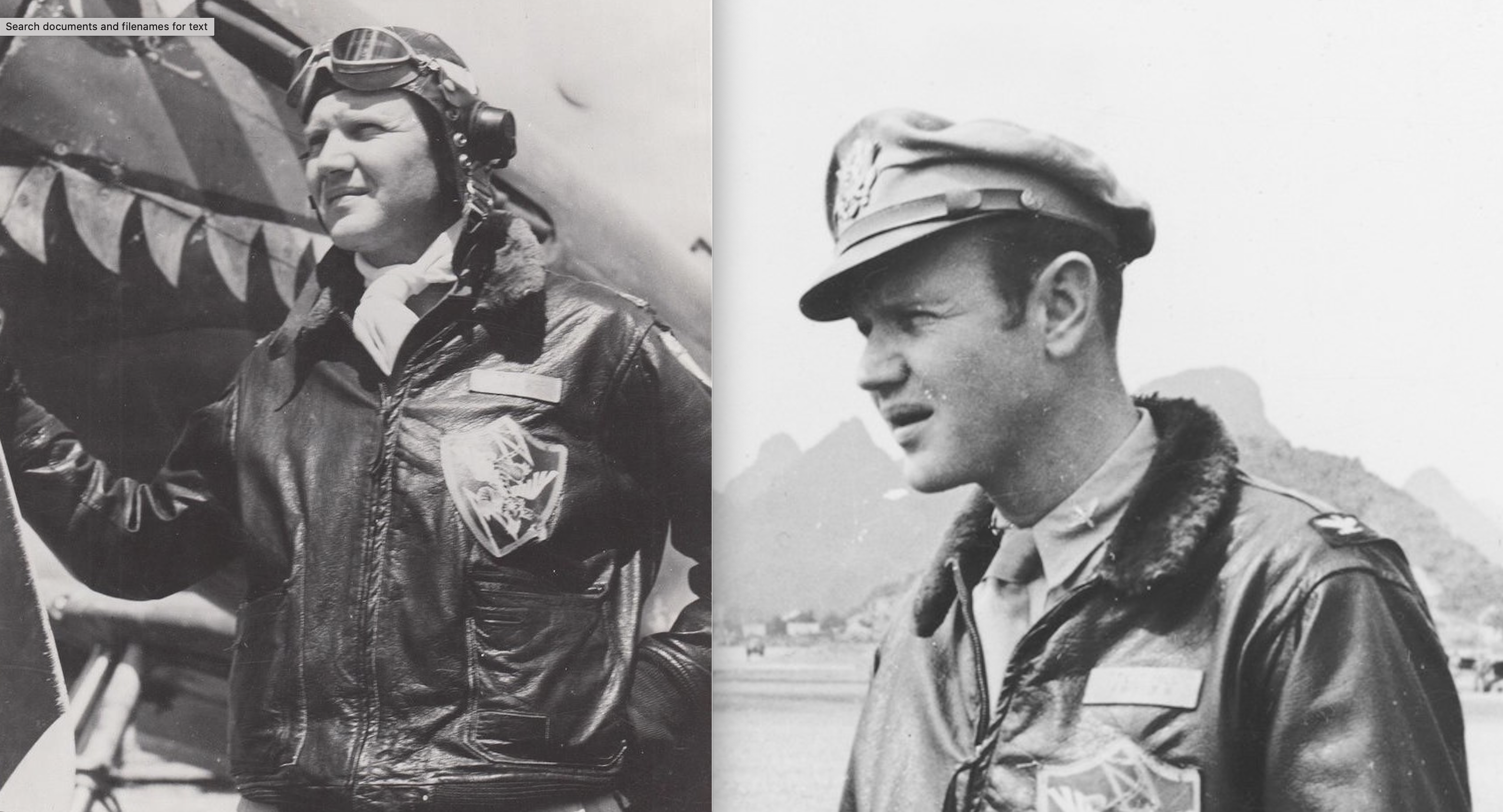 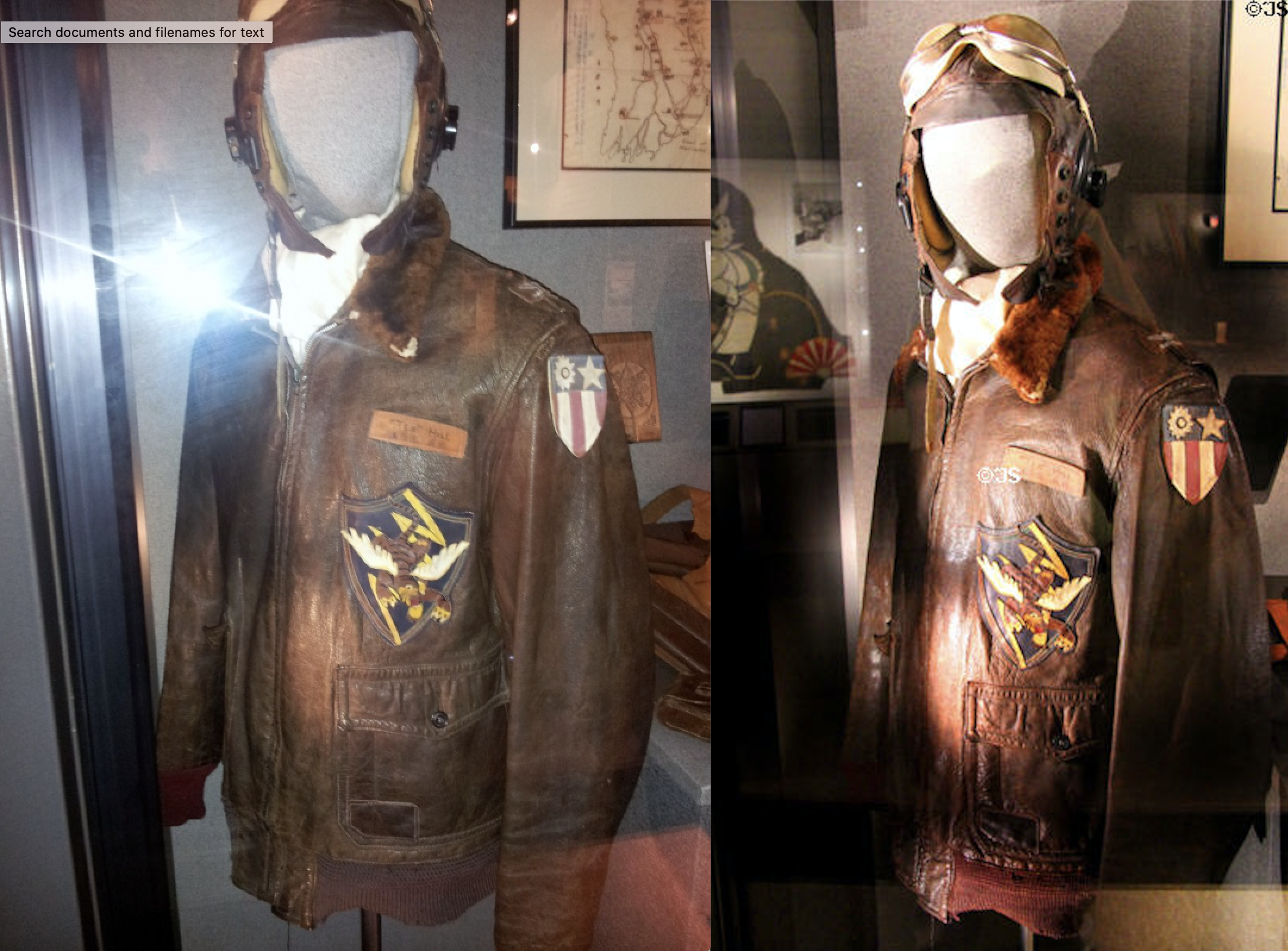