The first pic shows both examples. The contract tag on the size 44 (top) was removed at some point and the size 42 (bottom) had their knits replaced properly in the past. The leather color on both is still the original russet shade from production.
No patches were ever sewn on these examples. 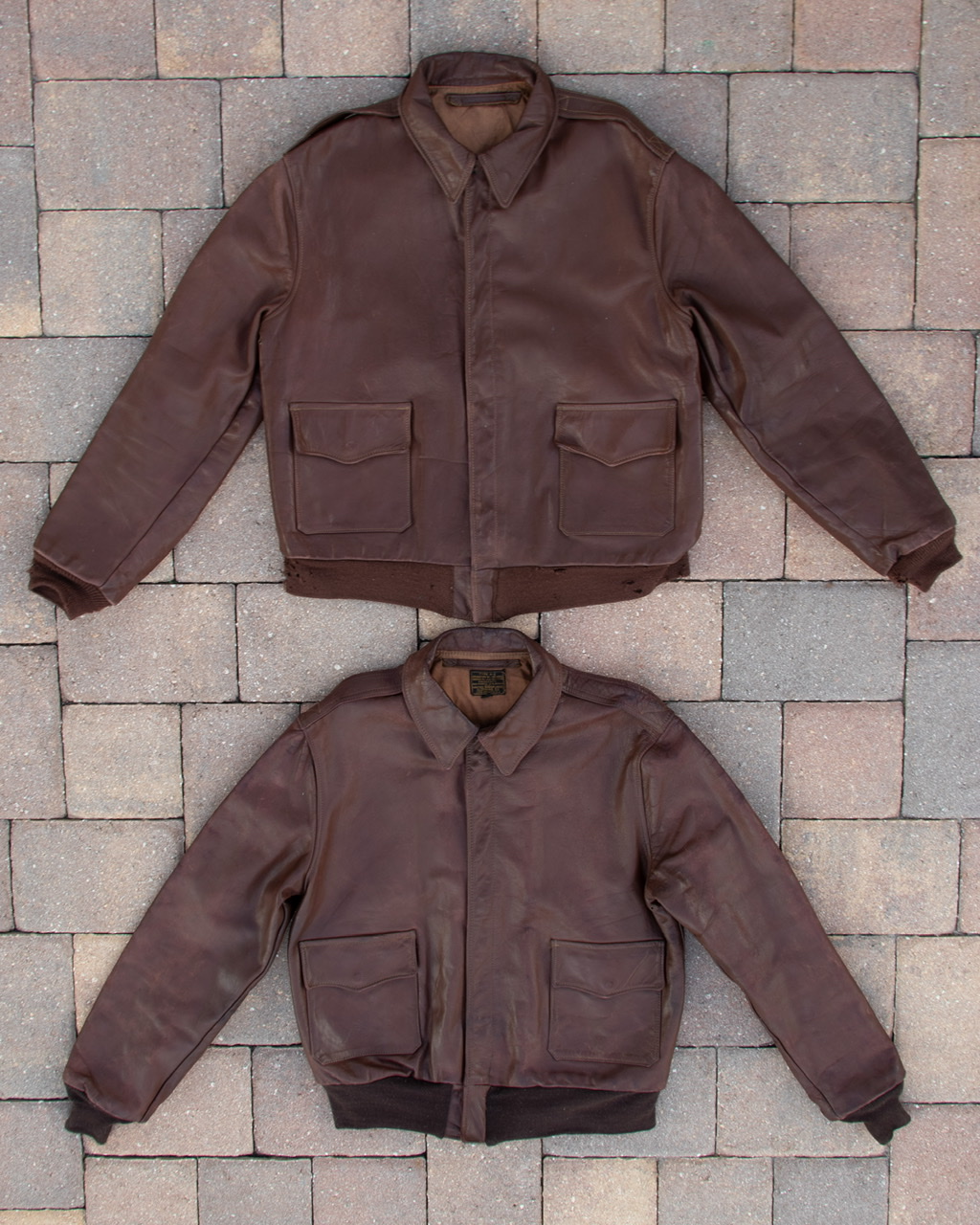 On the next picture we can observe both collars. The 44 looks longer and more pointed than the 42 but it is only because of the position of the camera. In fact they are pretty similar in shape. 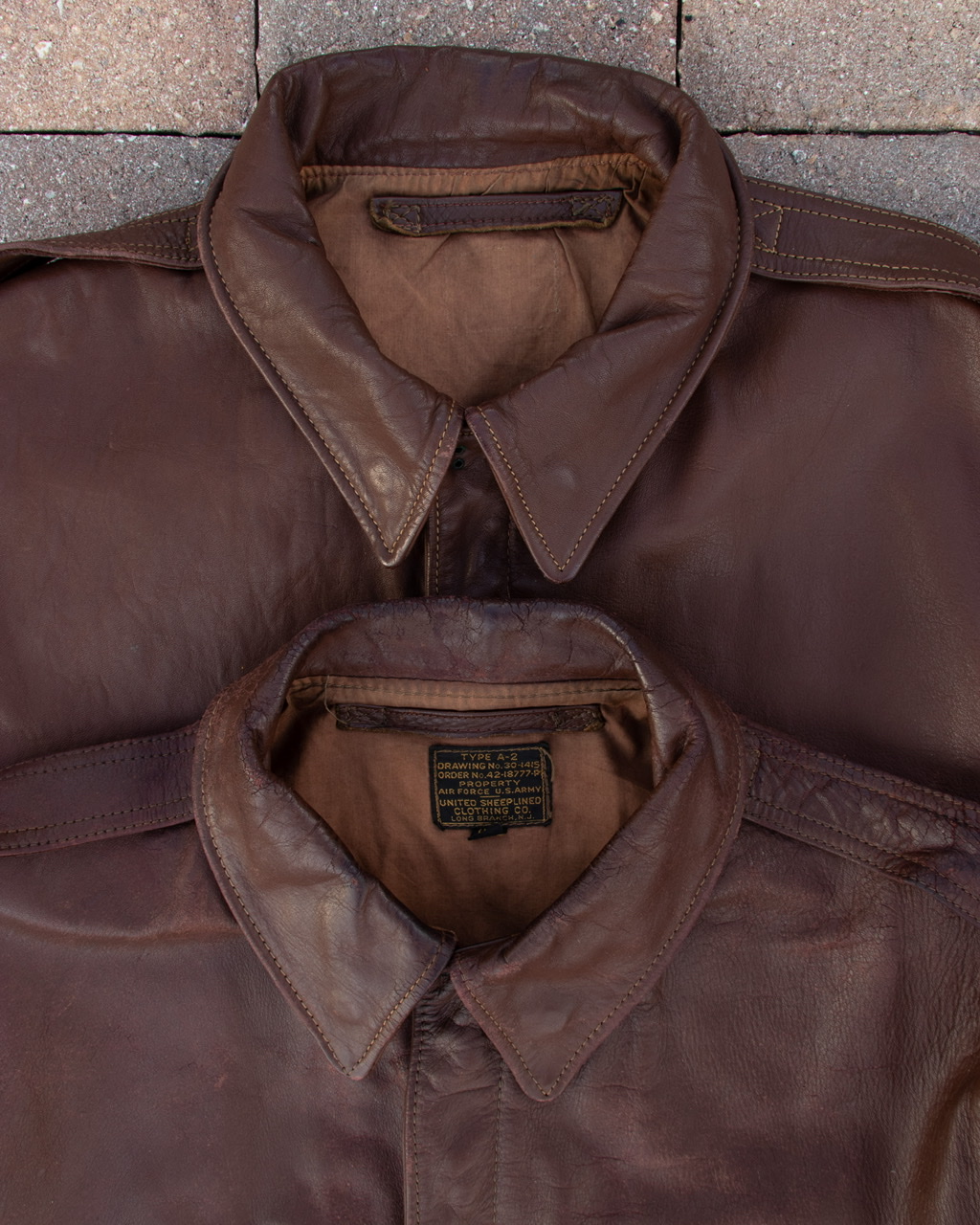 Here we can appreciate how similar the strong angles at the tips are. Note also the reddish thread used on both collars. The rest of the jacket uses olive drab thread for its construction. 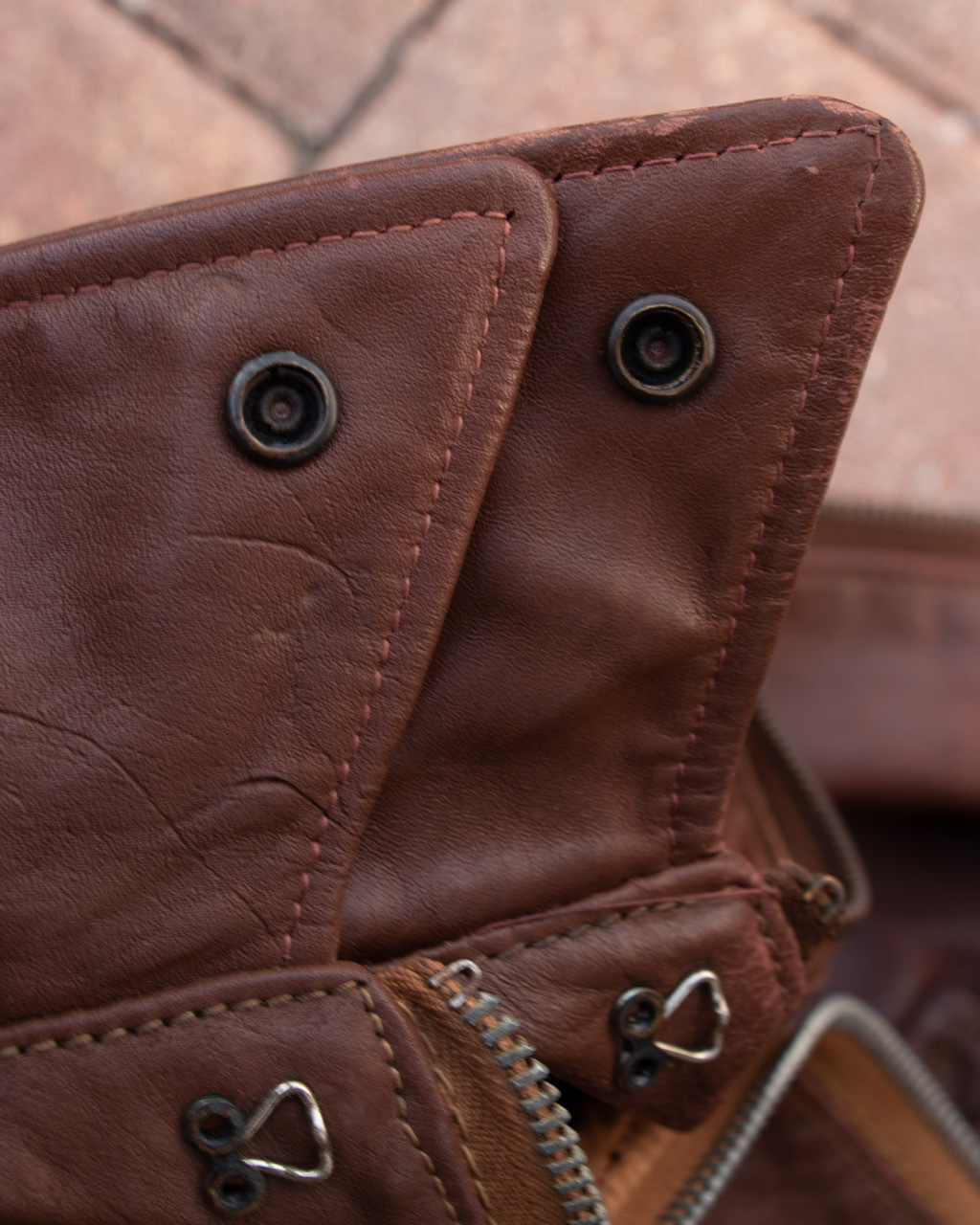 As expected, both examples use the same brown cotton lining. The original details of the stitchings are still visible. The neck label on the 42 is in mint condition. On the other hand, the 44 only has the ghost stitching of the label which is no longer present. 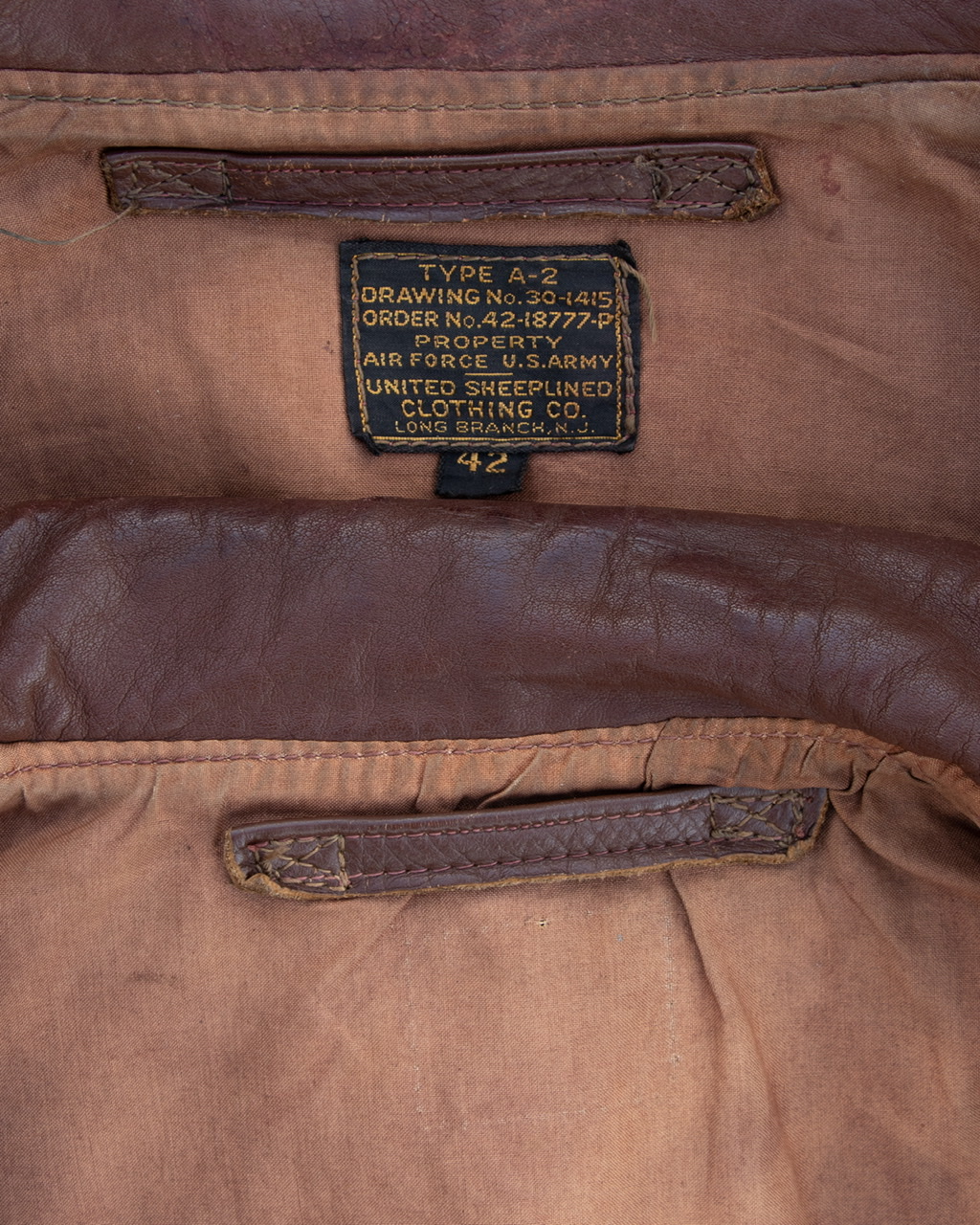 The next picture shows some details on the wind flaps. This contract utilized the double-barrel eyelet for attaching the collar hook. Inspection stamps on both jackets are still visible and quite vivid. Both were inspected by the same inspector, AN Z35. 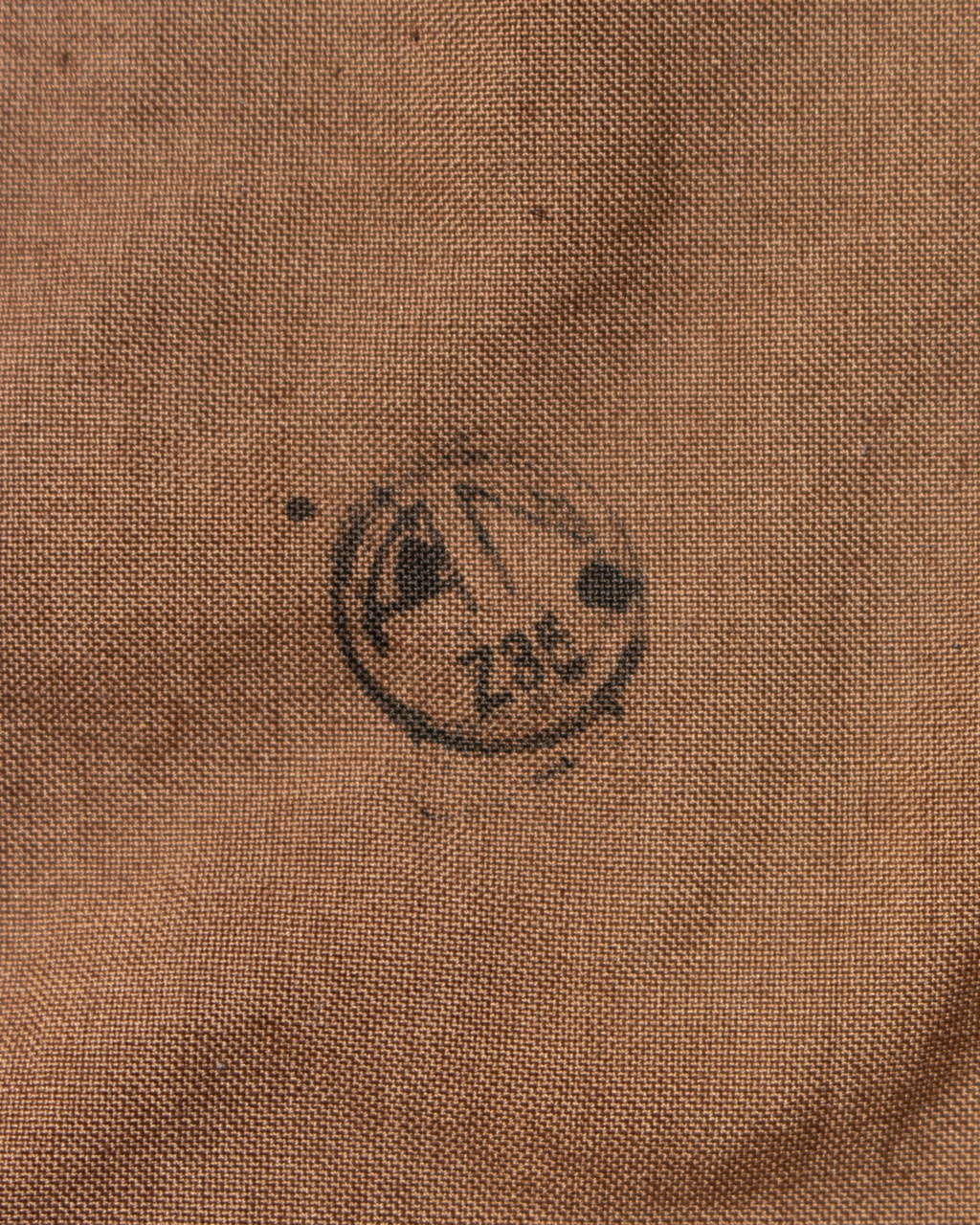 On this picture we can observe one of the main characteristics of this 18777-P contract, which is the shoulder seam, not visible behind the epaulettes, as it is centered under it. As a side note, the stitching on the epaulettes is clearly not drawing a perfect X on the boxes, but it is visible on the left epaulette (44) that they corrected the stitching on the top box during the production, as there is some ghost stitching left. 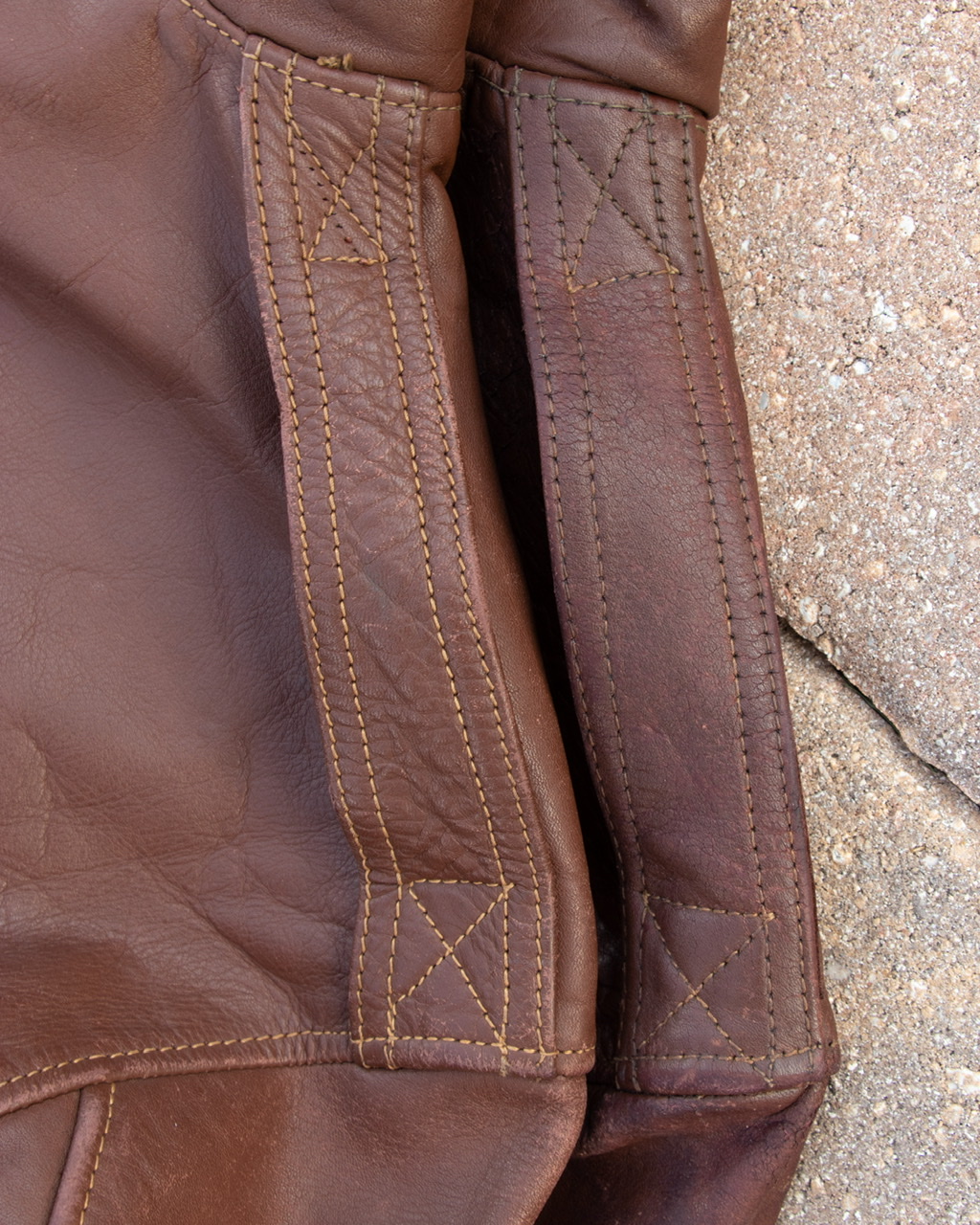 Probably the best way to recognize the 18777-P is by its pocket design. Here we can observe the right pocket of both jackets. The dimensions and design are virtually the same on both. Although the pocket on the left jacket (44) might look a bit smaller on this picture, that is only because the jacket on the right (42) is on top, making it closer to the camera. 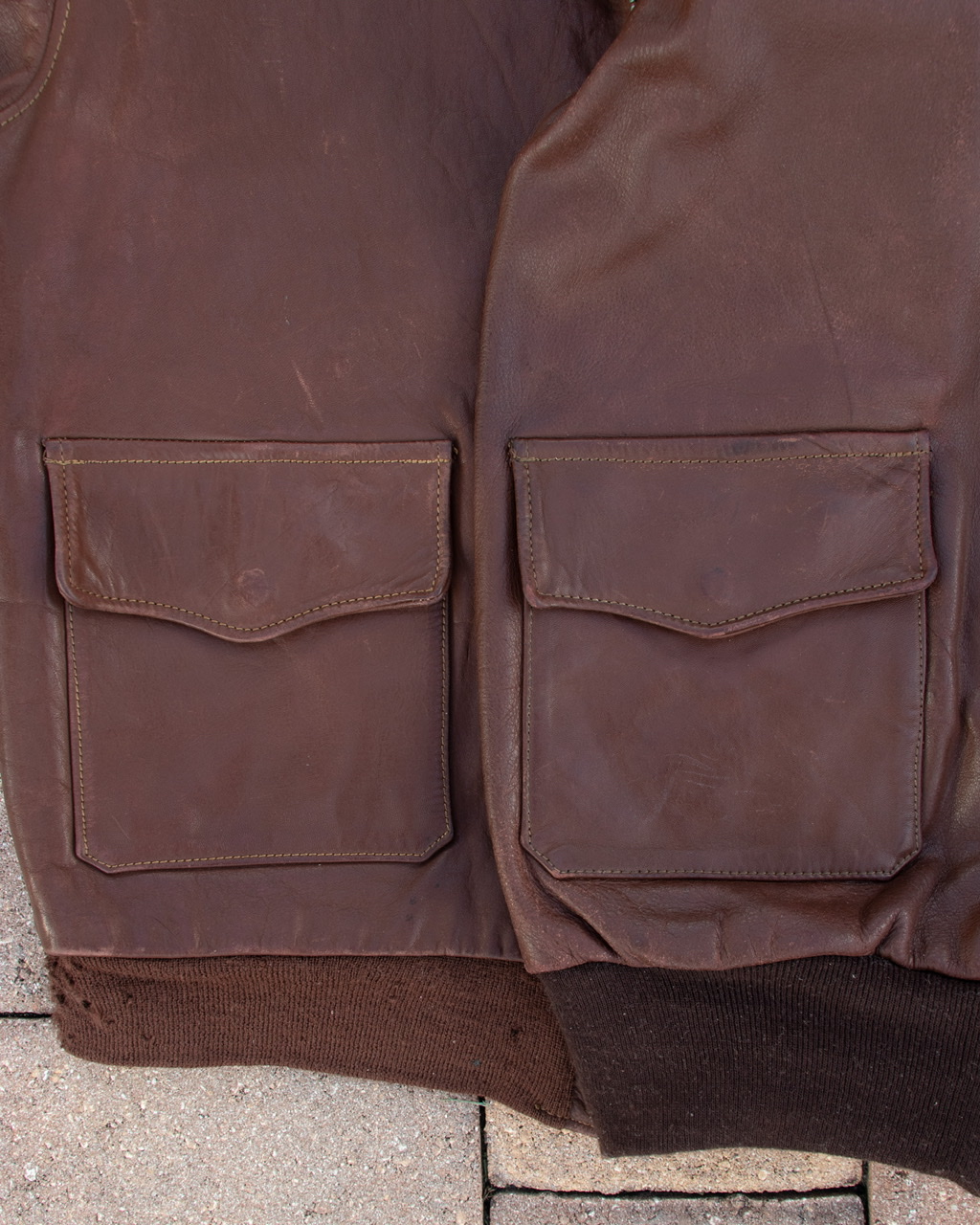 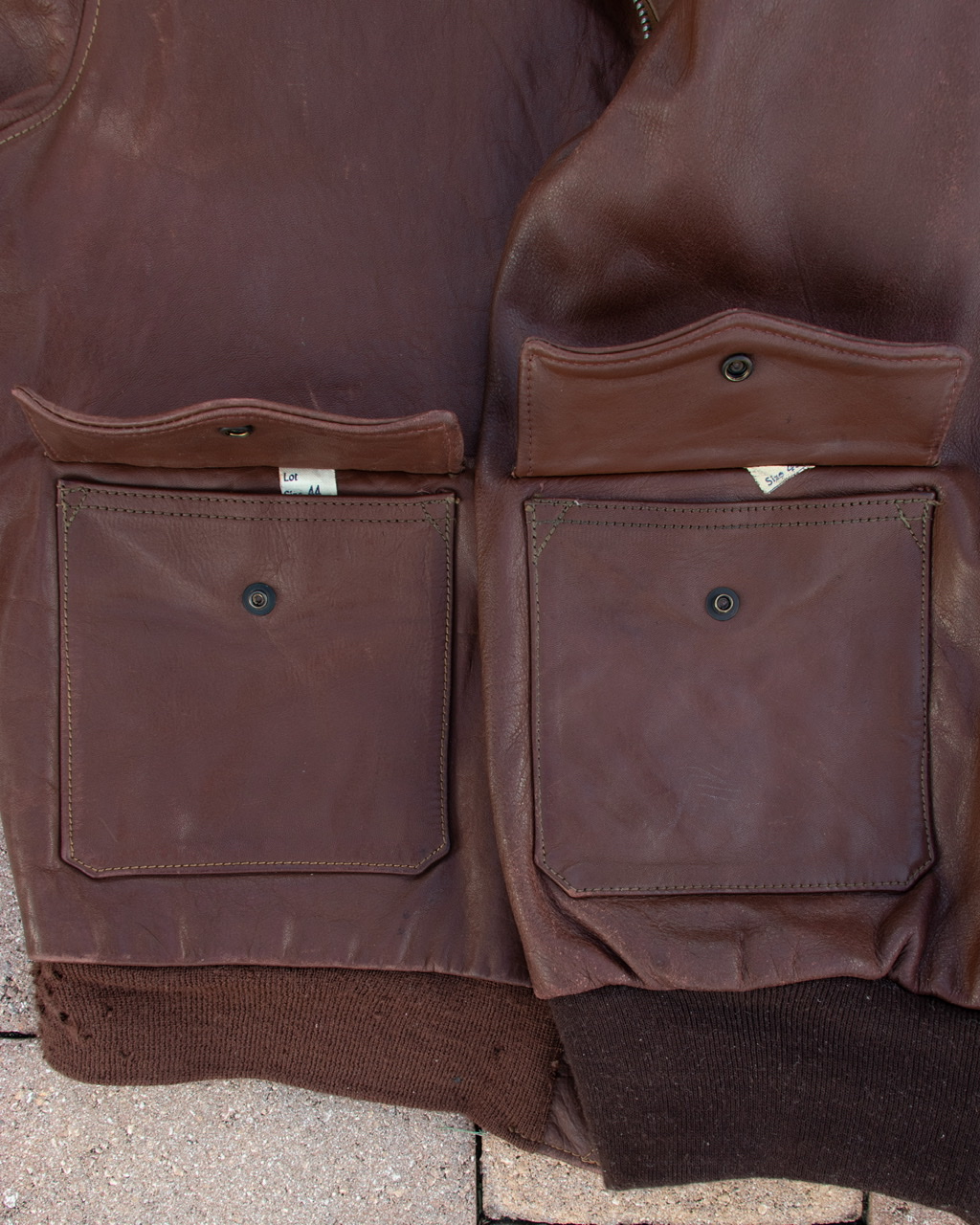 Here we have the close-up on the pocket labels. 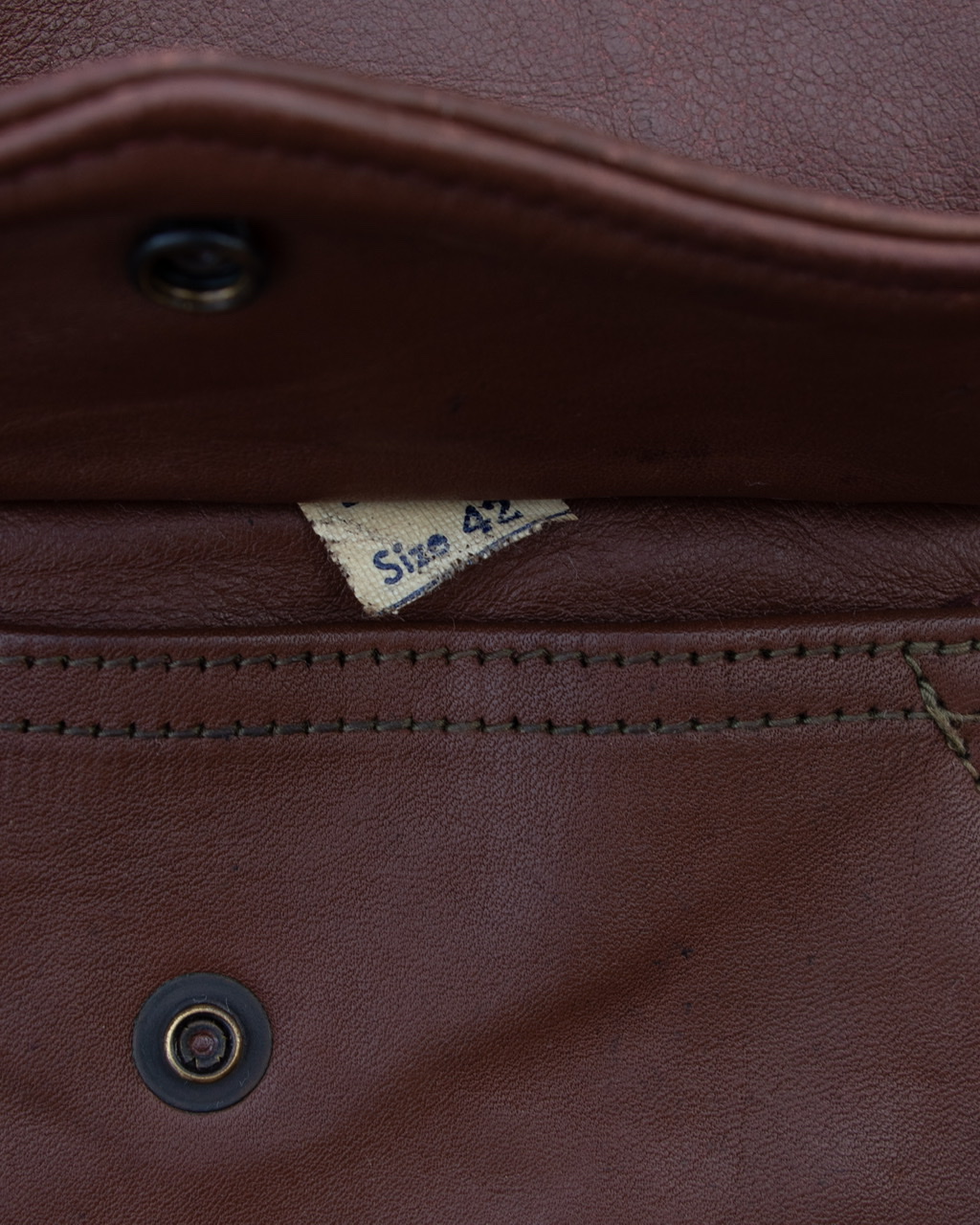 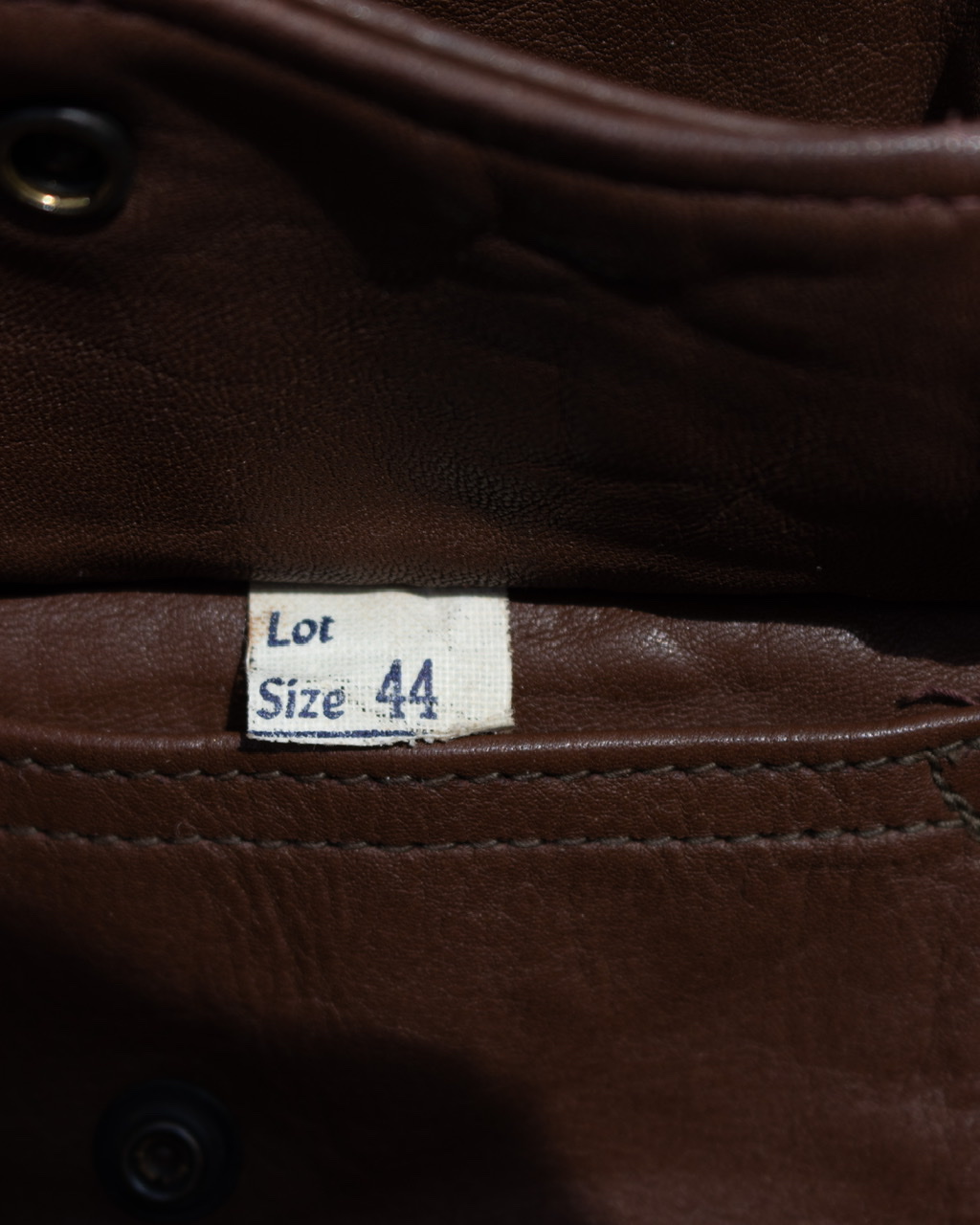 Now let’s talk about the zippers. In this particular case they use different zip models. 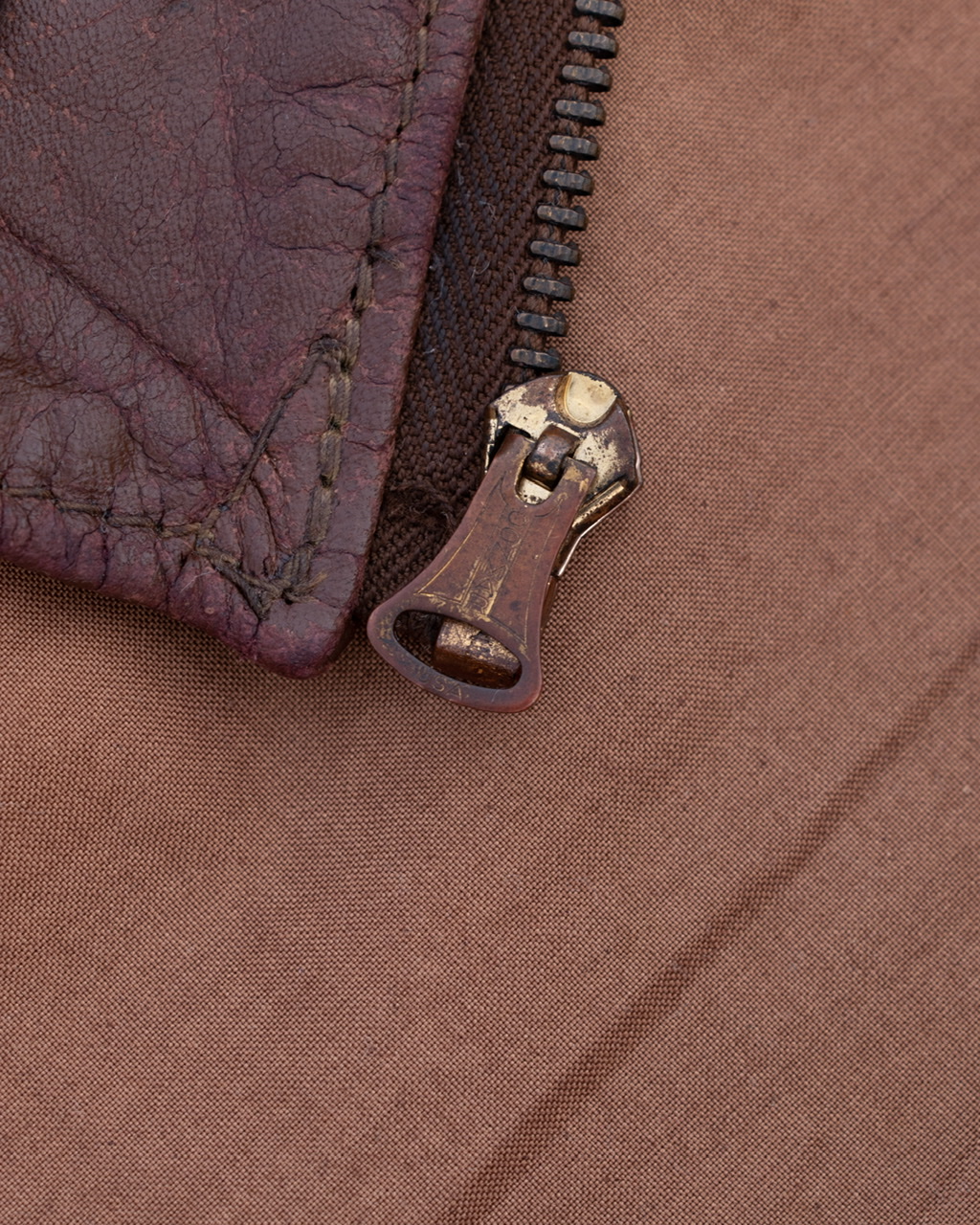 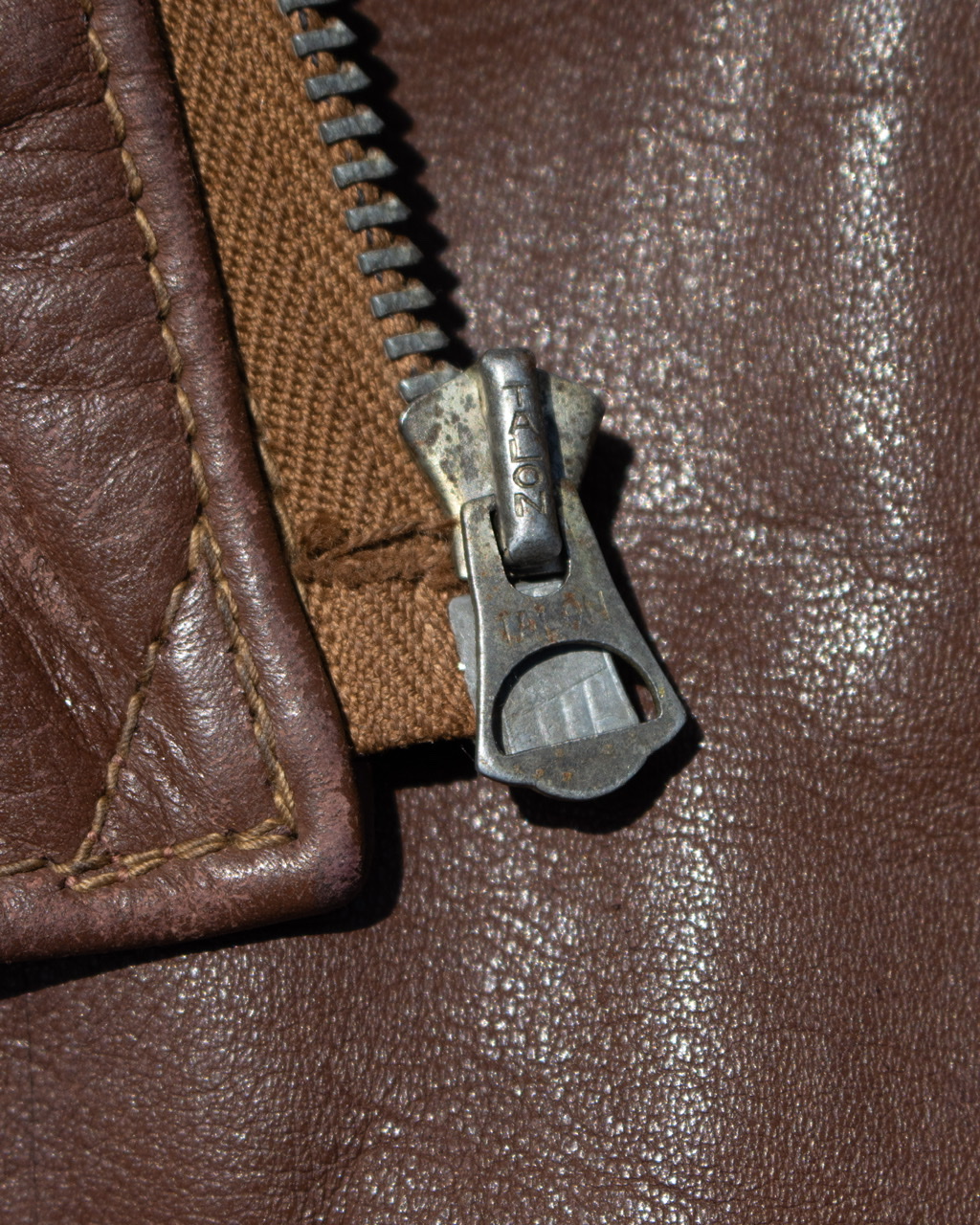 And finally, the most controversial part, when we are talking about original A-2s’, are the measurements.


Note: Due to the fact that the knits on the size 42 were replaced, I took measurements of both jackets with and without knits. The replacement knits are in fact longer than the original knits. Just to have a fair comparison.
Last edited: Jul 22, 2020

Magnificent Jorge and your detail photographs are just brilliant at highlighting the small details of the contract.

I always love your jacket posts - not just the superb collection but your photos of them are always so well done.

Thanks @Smithy, it’s always my pleasure!!! I’ll be posting more goodies in the next few days!!!! Now I’m gonna crash out cause it’s 4:20 here, gosh that was a long review!!

Thanks for that Jorge! You have a fantastic collection.... The above are great examples of 'variation' within same maker and contract.
S

way to go, daddyo. its a pleasure to read a detailed review of the us contract.

Cor it just goes to show how far a modern manufacturer would have to go to reproduce WWII construction! Imagine if most folks’ new ELC turned up with stitching like those epaulettes! Hellup! (As we say round here). And yes, thanks to Jorge and to everyone for their hard work on this thread.
D

Great stuff, Jorge, thanks for posting!

A stunning thread. Thank you all for these photos and a detailed review, it's very informative.

Phenomenal pictures and review, Jorge! Interesting how much the measurements on these wartime jackets could vary. My 42 is a good half to two inches smaller in every dimension.
Last edited: Jul 22, 2020

Hope these further comments on my USL are of interest - just checked my jacket after seeing Jorge' beautiful jackets as I was certain I would have had noticed that mine had red thread around the collar, and in fact it is a light (almost yellow) brown. However on checking underside of collar that is red, so looks as if top and bottom thread in machine was different.
Down to epaulet stitching, the one I first photographed and attached to original post was pretty good, the other shows the pressures of piece work (I'd assume), but then these jackets were meant to be functional, not works of art.
Also I'm not sure whether mine has the original zip, old stitch inside, isn't the Crown slider (the spring's amazingly like new) one that would have been with a chevron toothed zip, but this has teh horizontal teeth with a ball end and doesn't come up to collar, be interesting to hear what someone who knows about zips think
Cheers

It looks like the reddish vs pale thread is probably just the result of fading. Still, it’s good to see what the original color was!

Regarding the zipper, that’s interesting. It looks like the slider may have been replaced, although I think the tape is original, as I doubt a later restorer would have used such an unusual zipper tape.

The differences of threads are not really a result of fading, in fact, the top and bottom of the collar were constructed using different threads, the underside of the collar uses reddish thread and the top uses the olive drab as the rest of the jacket.

Here we can observe the differences of the color thread on the 44, which is basically in untouched condition. 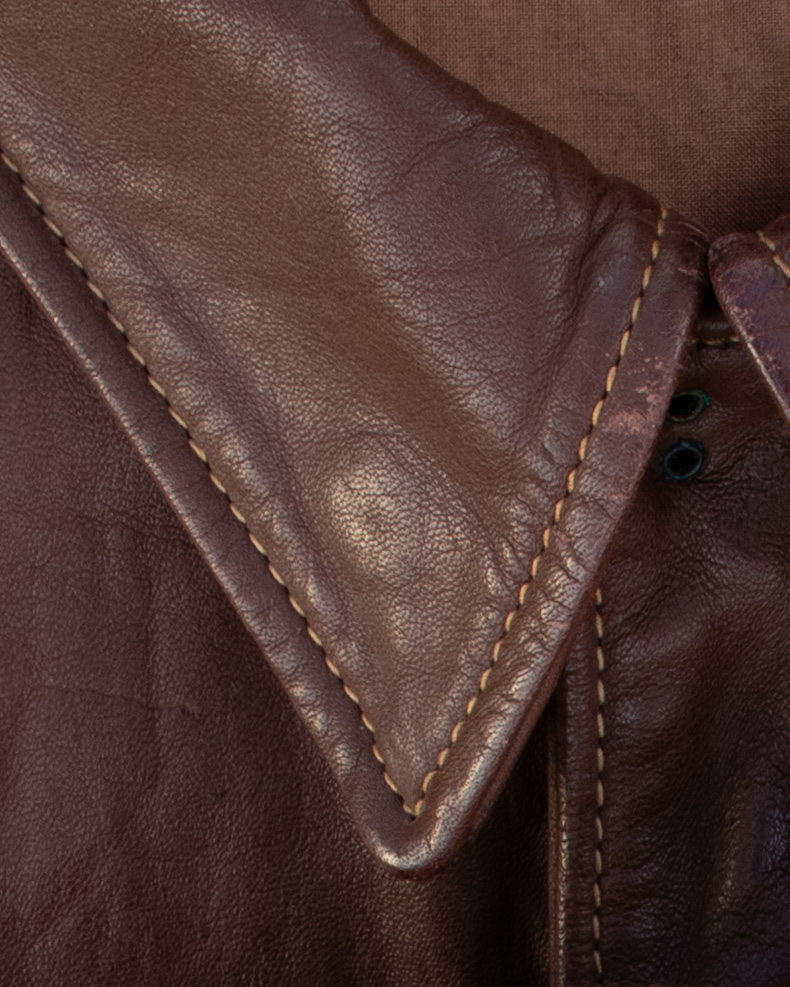 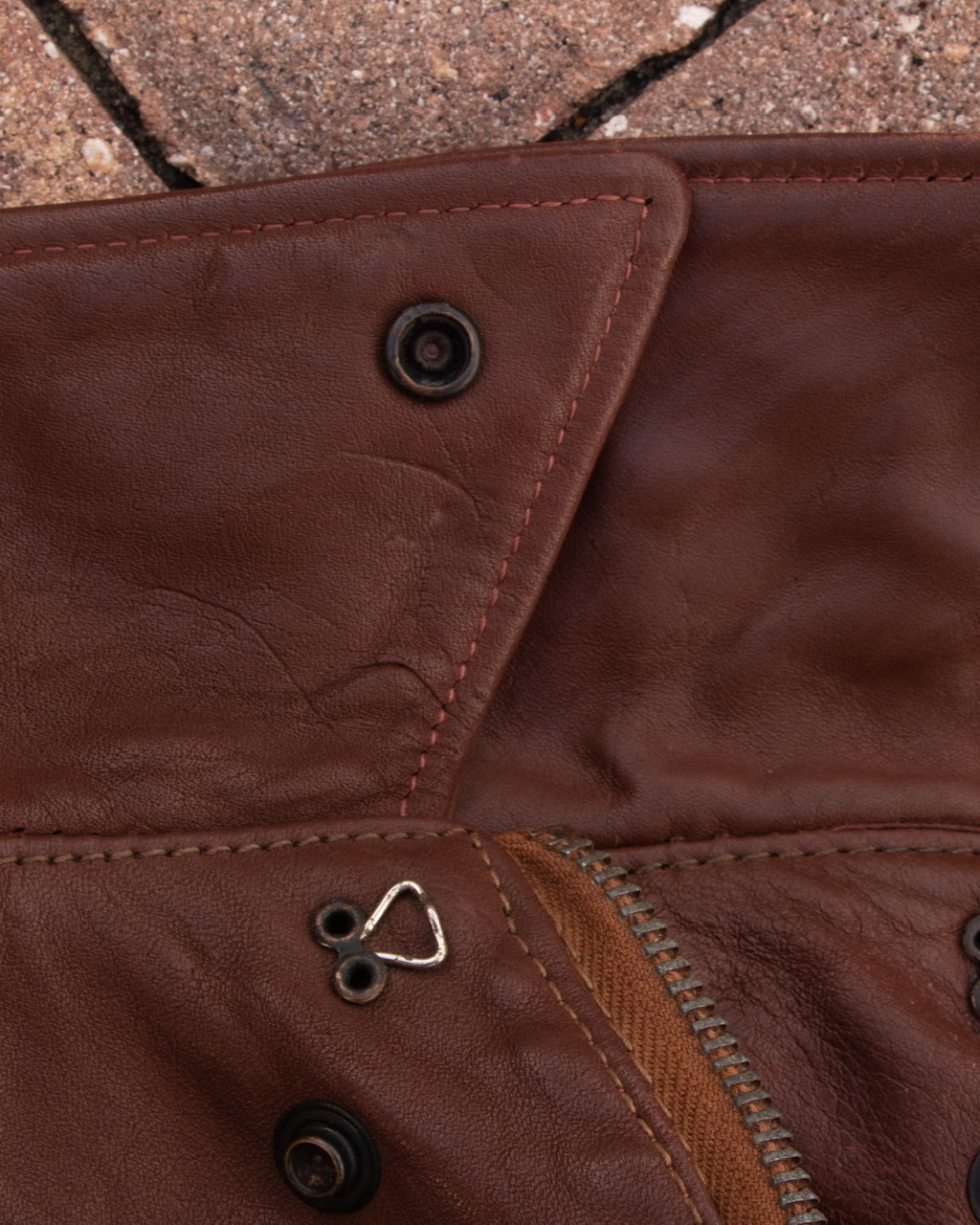 A close-up on the hanger loop of the neck allows us to confirm the use of different thread colors. Note the reddish and olive drab mix on the stitching. 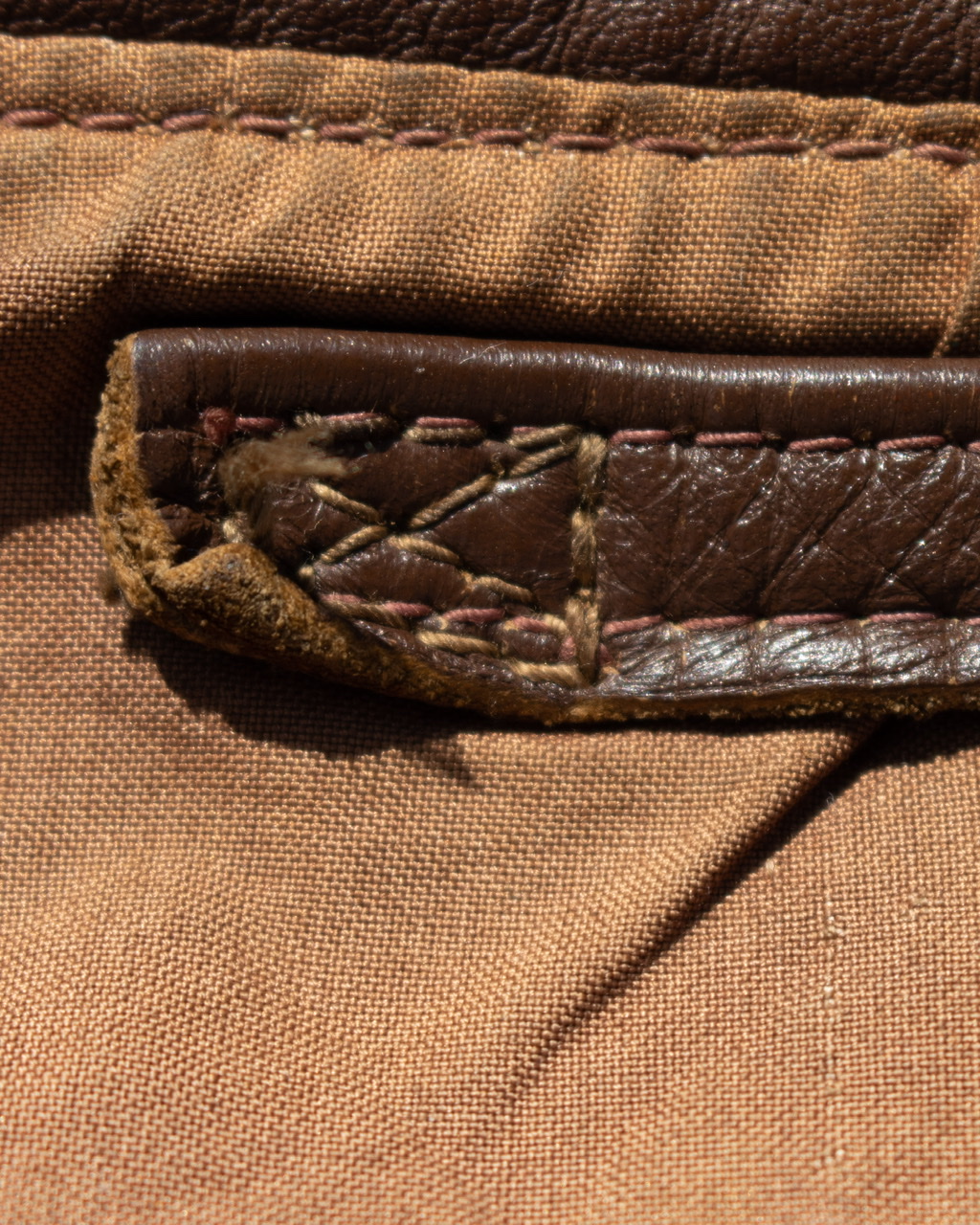 How could the top and underside of the collar be made using different thread? I thought it was the same stitch going completely through the collar.

mulceber said:
How could the top and underside of the collar be made using different thread? I thought it was the same stitch going completely through the collar.
Click to expand...

I'm completely unfamiliar with leather-working, but for regular fabric sewing, a machine uses two separate, interlocking threads. The top thread is the one that goes through the needle, and the bottom thread is on the bobbin inside the base of the machine (really old machines have a shuttle rather than a bobbin, but it's the same sort of two interlocking threads).

mulceber said:
How could the top and underside of the collar be made using different thread? I thought it was the same stitch going completely through the collar.
Click to expand...

That is a good question, but only a seamstress could answer it, my sewing skills and knowledge are limited.

Same - glad we have @Nnatalie here.