Can only confirm surely with all dimensions and weight... but I am almost certain its AK47 post war... US/German/Japanese/Soviet WW2 were different...all tapered and not 7,62 in diam.

Pilot said:
Can only confirm surely with all dimensions and weight... but I am almost certain its AK47 post war... US/German/Japanese/Soviet WW2 were different...
Click to expand...

You know you’re most likely right… Not that I would doubt you anyway! LOL! But I do recall looking at another comparison and it mentioned it being aK 47.

At least now I know if it falls off my jacket and I lose it I won’t feel so bad about it! LOL!

I have a few dug-outs ( bullets) from WW1 fired onto bunkers and fortifications... so they are torn and bent... but full brass/copper... and mostly French Lebel rounds... need to find them in my messy relics at home....
Last edited: Jan 17, 2020

So this may seem like a silly little thing but an item I lacked for my WWII era desktop was a 1940's era pencil. During the war there was a shortage of metals due to the war effort so the ferrule ends holding the eraser were made of plastic and sometimes wrapped paper. This particular WWII era Dixon Ticonderoga has a paper cardboard ferrule which is particularly rare for this brand and was most likely an interim product to keep production flowing while plastic was being sourced or machining equipment for production was acquired and set. It’s also hard to get wwii era pencils with an eraser still on it. (Although usually petrified)

while many in the military used mechanical pencils I have seen a number of photographs of the average yellow pencil being used. And of course prewar metal ferrule pencils were still widely available. 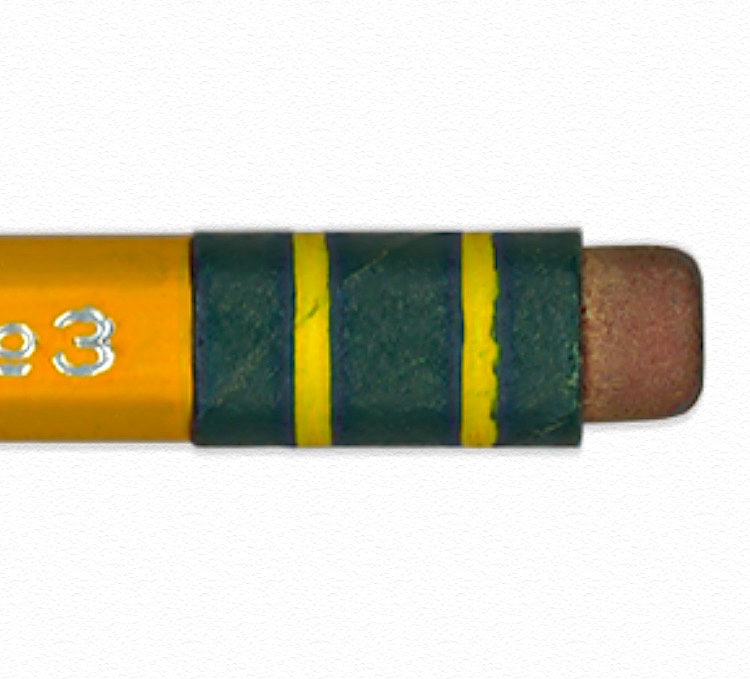 It now sits proudly on my 1945 Ever Ready Desk Calendar once owned by Army Major Howard Ayers SR of the Army Air Training Command which he made notations in pencil perhaps with a pencil just like this one! 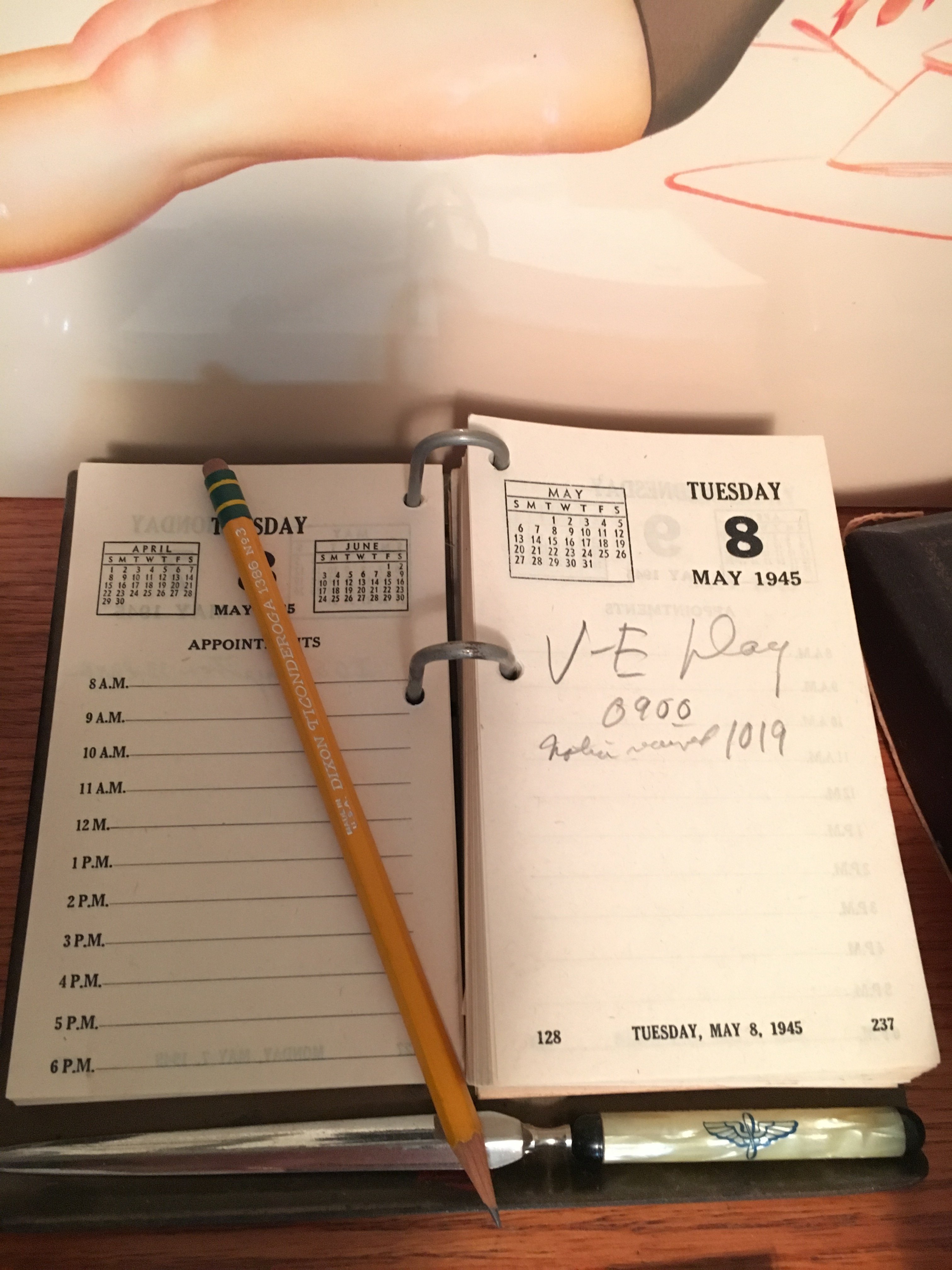 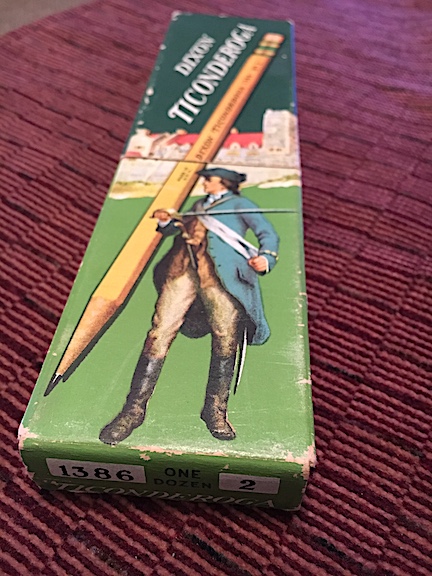 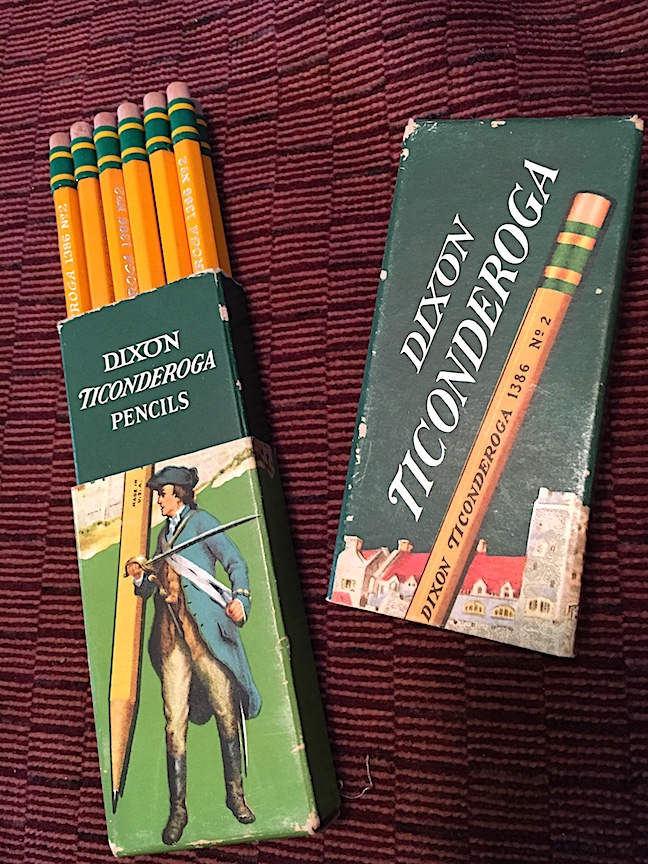 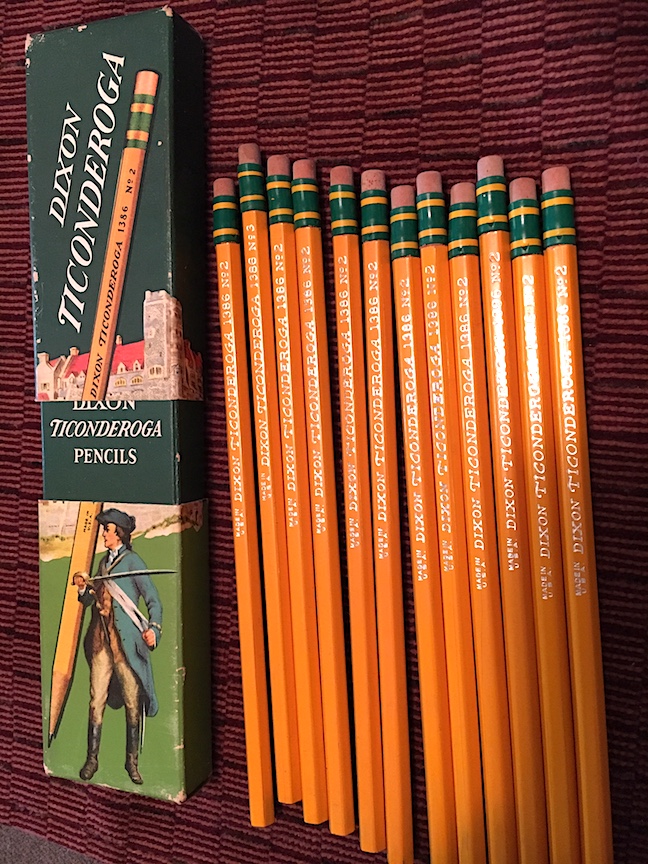 Many other companies manufactured pencils with the paper ferrule and I also have an unused Made in U.S.A. L & C Hardtmuth Inc. MEPHISTO Writing 465 x no.3 with a plastic ferrule.

These used to be cheap to buy but like most vintage 40's era items they have gone up beyond what they are actually worth in my opinion. There are many forums, blogs and collector groups for vintage pencils and in my research I found the information delightfully interesting and helped me to narrow down which pencil I actually wanted for my particular desk era setup. but now, I'm done with pencils and won't be joining any pencil collector's groups! lol! 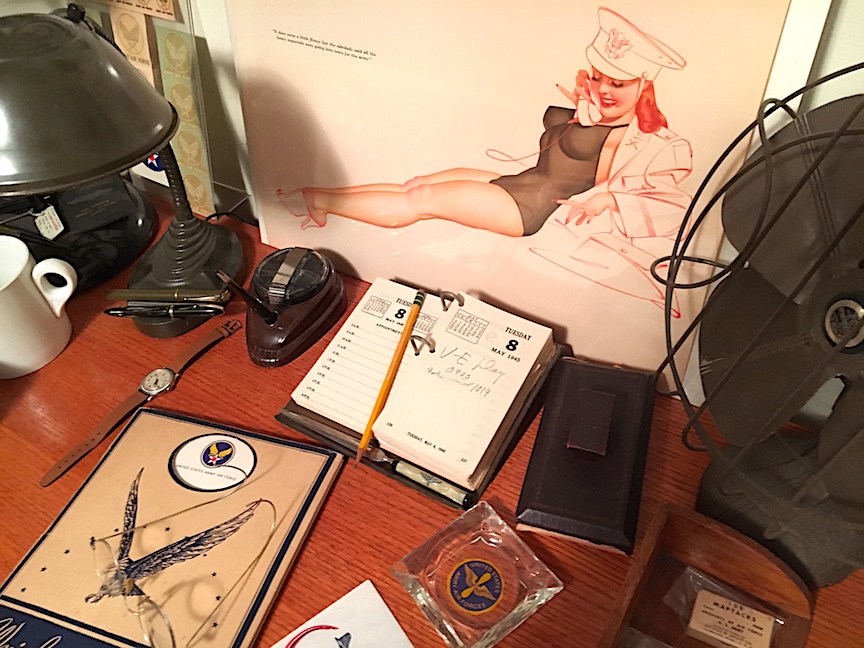 One of the many items that turned up from a good friend if mine in the US ( he is my intermediary , about 8 months worth of buys!)
41 Patt life vest Carl said:
One of the many items that turned up from a good friend if mine in the US ( he is my intermediary , about 8 months worth of buys!)
41 Patt life vest View attachment 31392
Click to expand...

thats amazing! saw your post on the FB group about this... great stuff!

Thanks Ed !! You saw the other stuff as well then ??

well, this might be considered a CBI item lol! I added this little charmer to my collection (my first teapot actually) its an Indian Red Cross teapot dated 1943.
I haven't been able to find any information on the maker mark. The Indian Red Cross (IRC) is part of the International Red Cross in India since 1920 and being China Burma India was a primary theater of operation it begs to wonder how this ended up in the states... I would like to think someone brought it home after their tour of duty
As you can see its quite tiny! 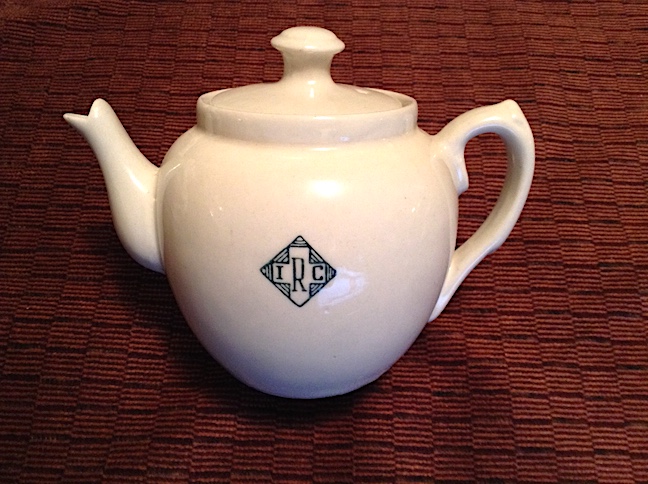 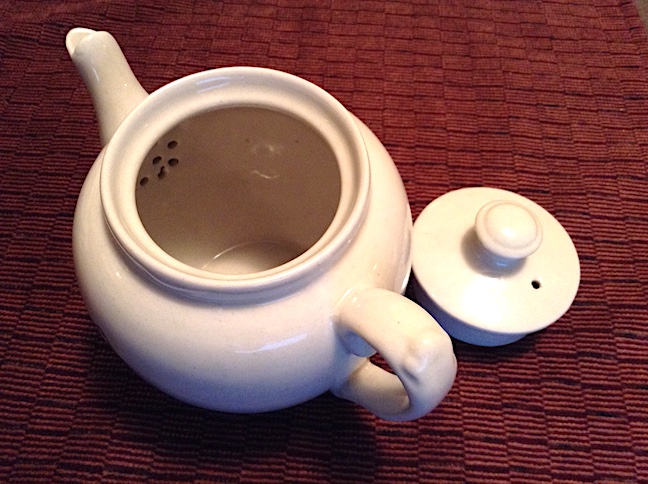 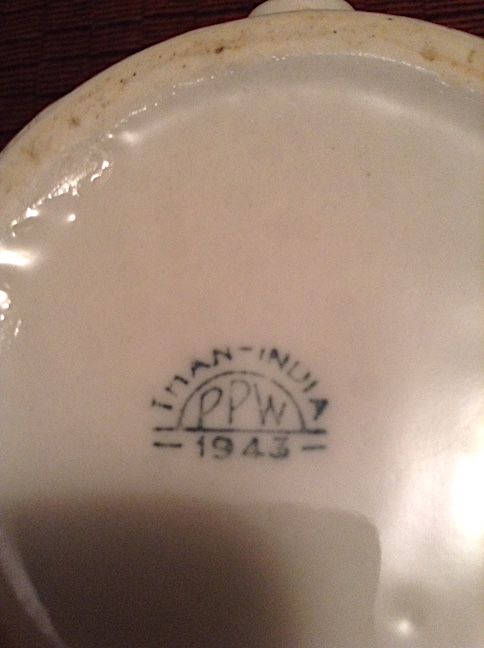 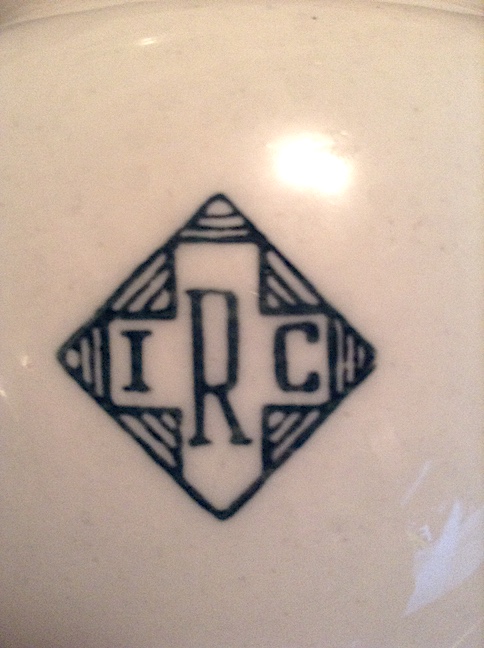 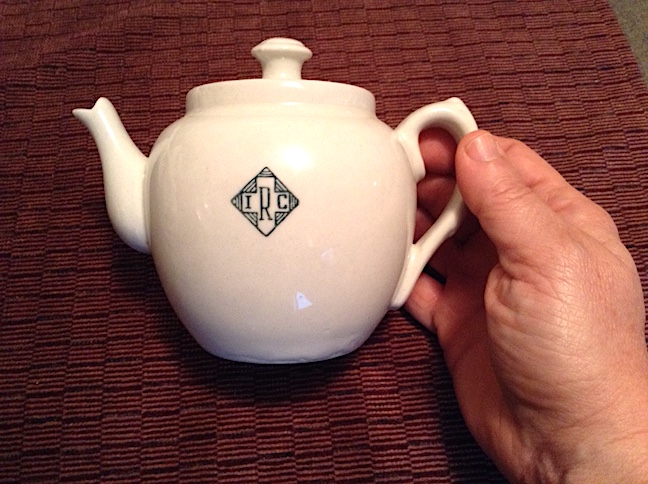 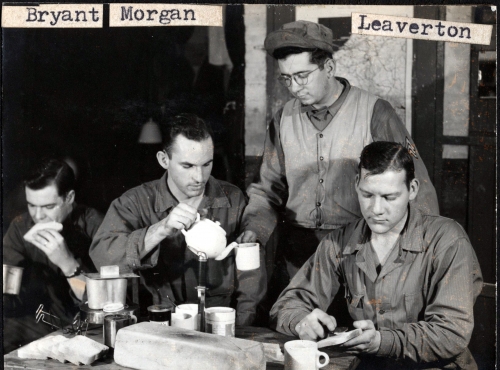 Edward, you have to remember that this was before teabags so these smaller pots were used when brewing tea for one or two people. You only brought out the big pot when there was a crowd round for a cuppa. My granny (very old school English) who would never allow teabags in her house even up until she fell off her perch in 2001, used to have several sizes and in varying degrees of poshness depending on how many and who the tea was for.

Smithy said:
Edward, you have to remember that this was before teabags so these smaller pots were used when brewing tea for one or two people. You only brought out the big pot when there was a crowd round for a cuppa. My granny (very old school English) who would never allow teabags in her house even up until she fell off her perch in 2001, used to have several sizes and in varying degrees of poshness depending on how many and who the tea was for.
Click to expand...

great info thanks! I thought it odd how much smaller this one was compared to the ones I've seen used in the ETO such as the pic posted above. a few months ago an RAF marked teapot exactly like the one in the pic above was offered on eBay out of the UK but I lost the bid pretty happy with this one though. these wartime era teapots seem to rarely ever come available.

Another item I needed for my USAAF WWII era desktop was a period telephone. Anything from the 1930s or 40’s would work.
I had a particular phone in mind but as all things vintage these days there are vintage telephone collector groups, forums and restorations clubs and with social media and auction sites the prices have gone way up.
An American telephone from the 1930s and 40s are highly sought after and can run from $200 to $600 depending on condition. I didn’t need one that actually worked but looked good on display. The Army Signal Corps “toaster” phone looked nice but weren’t produced until the last half of 1945 with most that are available today being post war. The Army mostly used everyday civilian telephones in their offices anyway. But what I actually wanted was the highly desirable (and pricey) British made 200 or 300 series GPO telephone. The Mighty Eighth were based in England after all and the GPO series were the telephones they used. I have many photographs of the USAAF using these phones in their offices, control towers, operations rooms and briefing rooms.
These can be had easily in England where they are highly collected but usually run around $300 to $600 and shipping one to the US is at least another $80. However these phones are not at all common in the states… in fact quite rare to find one in the US. Back In January a 1930s 232 GPO phone in perfect working condition was offered on eBay from someone in the US and I forgot to bid… 1 bidder $164.99 plus 21.10 shipping. I was bummed.

Well, finally in early February someone posted a late 1930s 232F GPO telephone with a buy it now price of $99.00 ($14.95 shipping)! It was missing the separate bellset ringer box but no matter as those are usually hidden away under the desk or hanging on the wall anyway. Upon closer inspection it showed that one of the rear cradle hubs was broken off from having been dropped but it still displays nicely!

I did some quick research and located a place called Britphone that had parts and they had a few 200 series repro cradles in stock for £21.00 plus £15.00 shipping so for $49.39US I had a replacement cradle and even found a website that showed how to take apart a 232 GPO to replace parts! 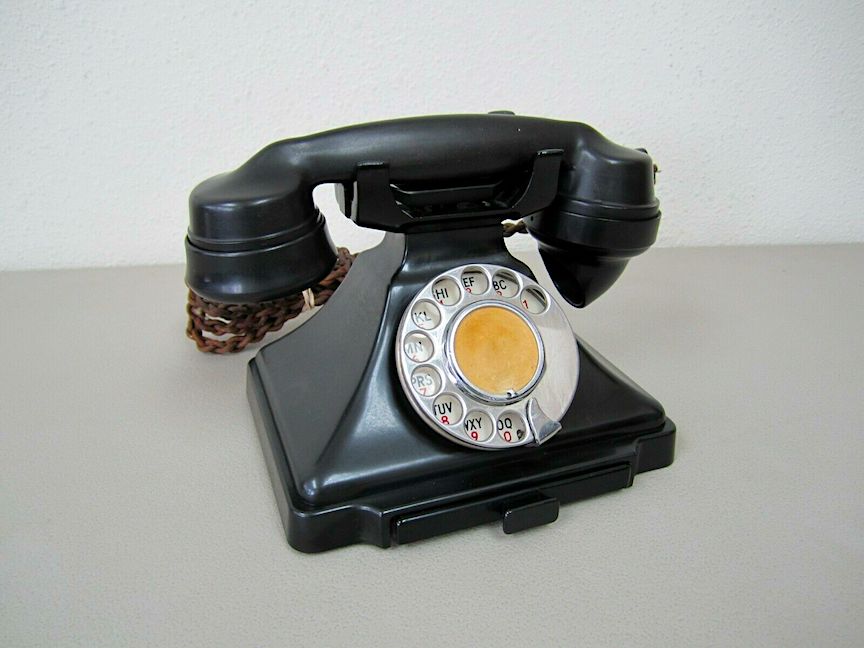 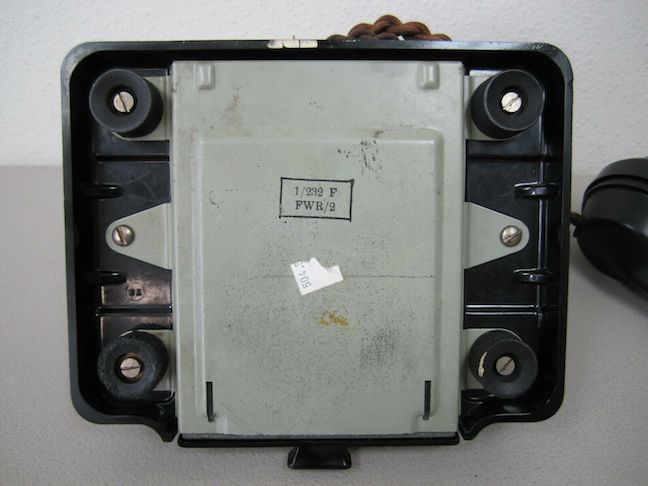 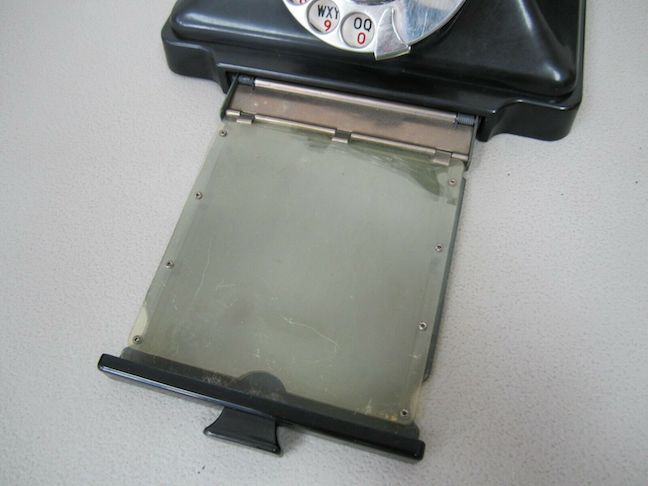 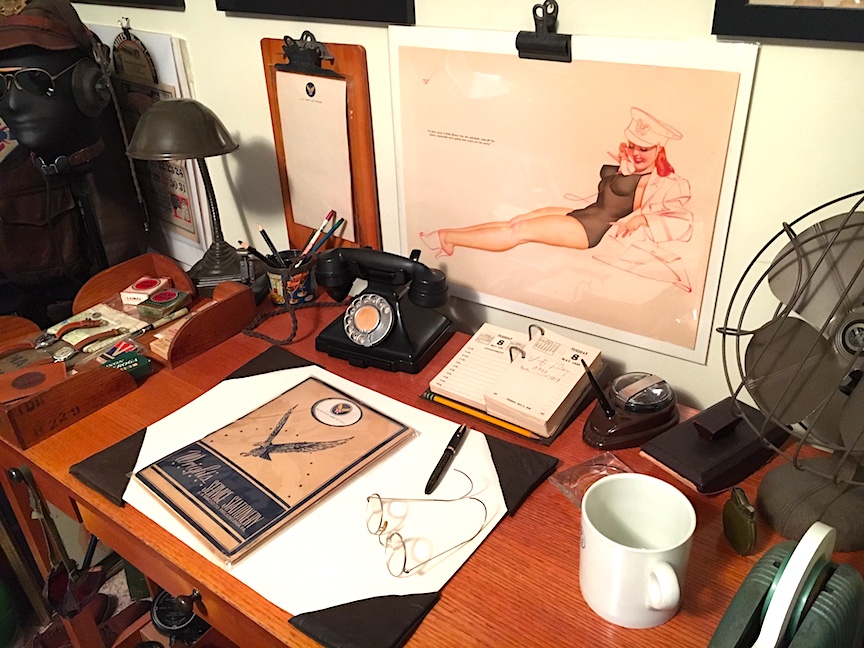 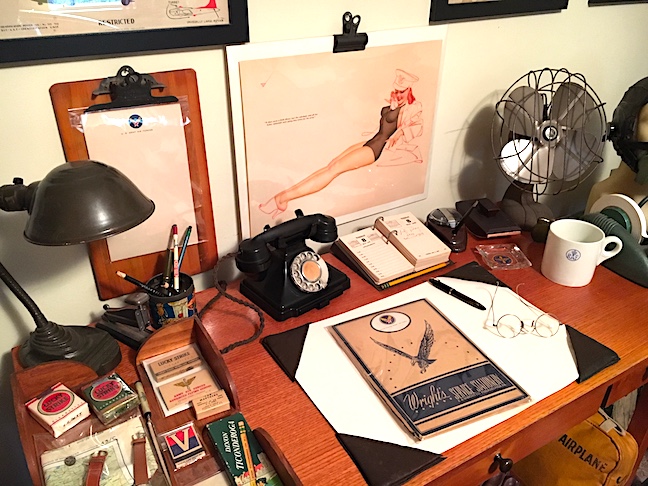 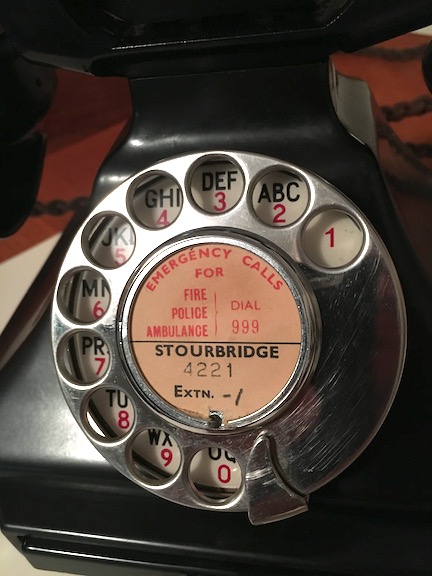 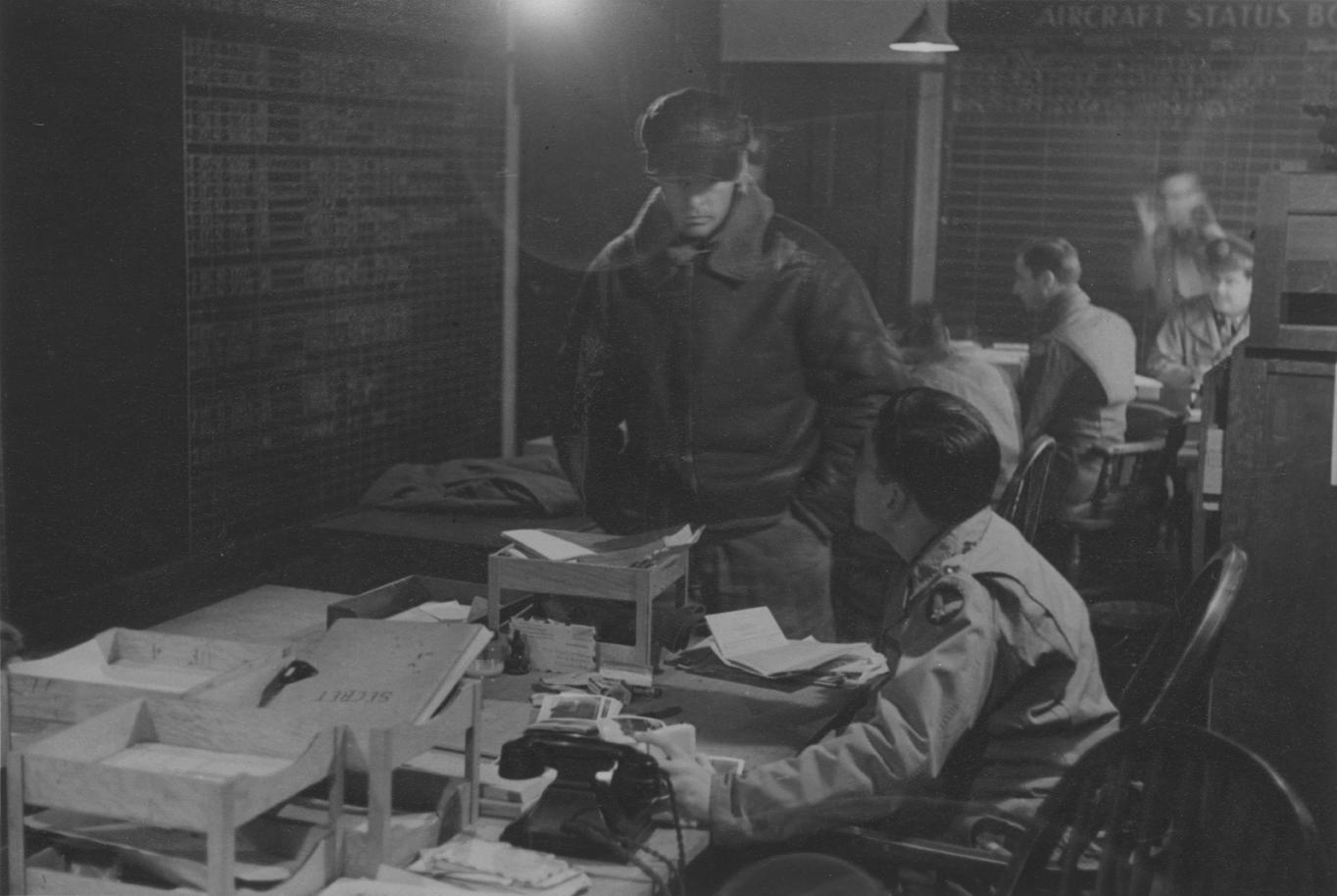 what I really love is the braided cloth cord! so much character! 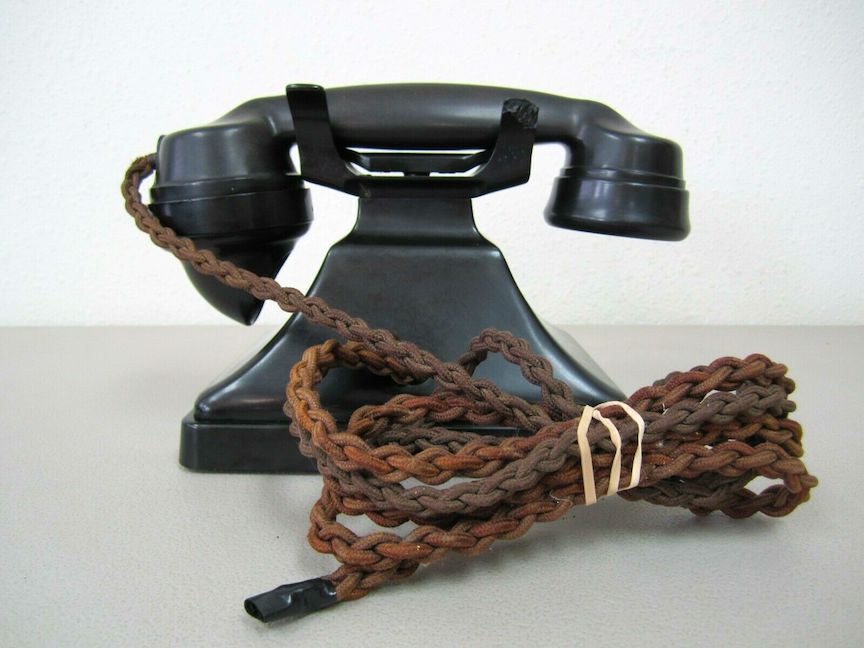 As you say you need the bellbox for that phone too

I have a couple in use alongside modern ones in the house. Bellset is in the back hallway - proper old school.
Last edited: Feb 11, 2020

Micawber said:
You need the bellbox for that phone too
Click to expand... 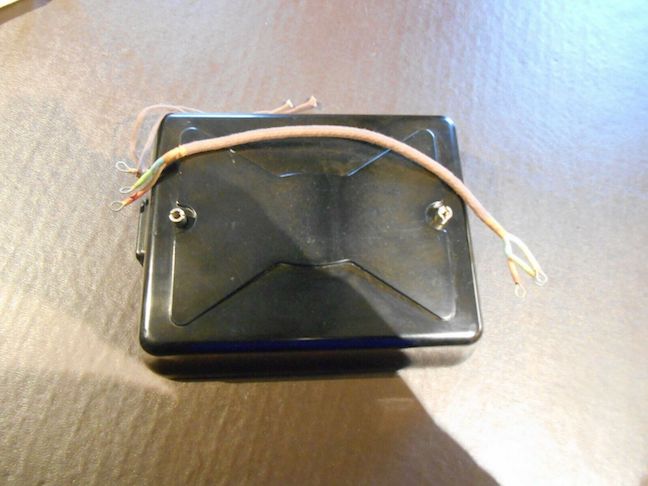 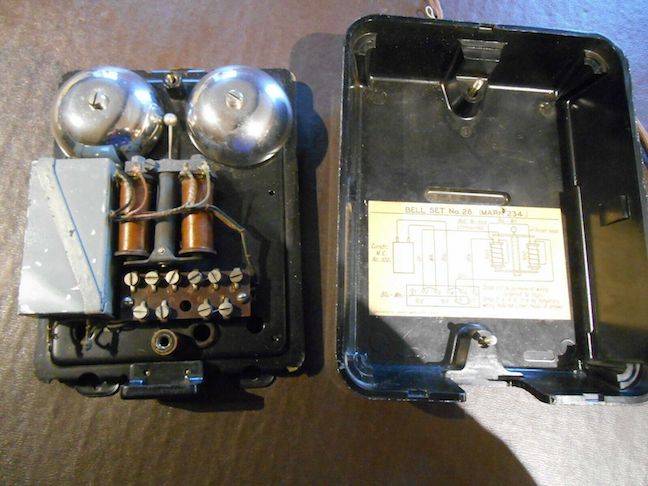 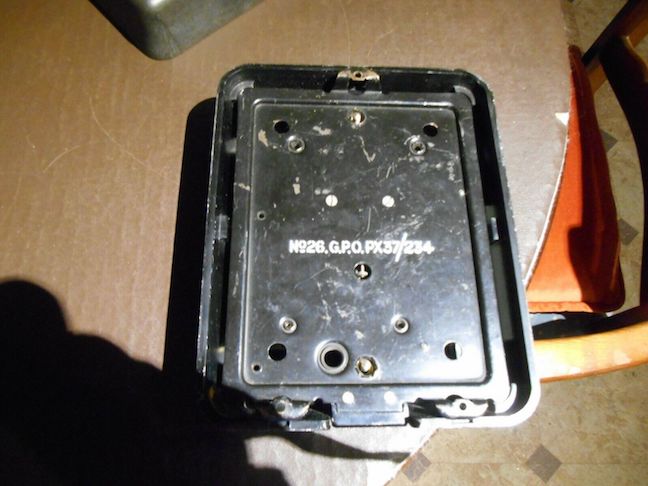 Yep. Mind you they are in the collectable category now. I'll check in the attic as I have some old GPO bits up there as I pick up the odd phone every now and again. I know I have some old wooden bellsets but they won't work with that phone. May have a Bakalite one but can't remember. The old phones turn up in my local auction for not a lot, bellsets less so but you just never know. The old phone dealers over here want an arm and a leg for them now.

One from the 91st BG at Bassingbourn... 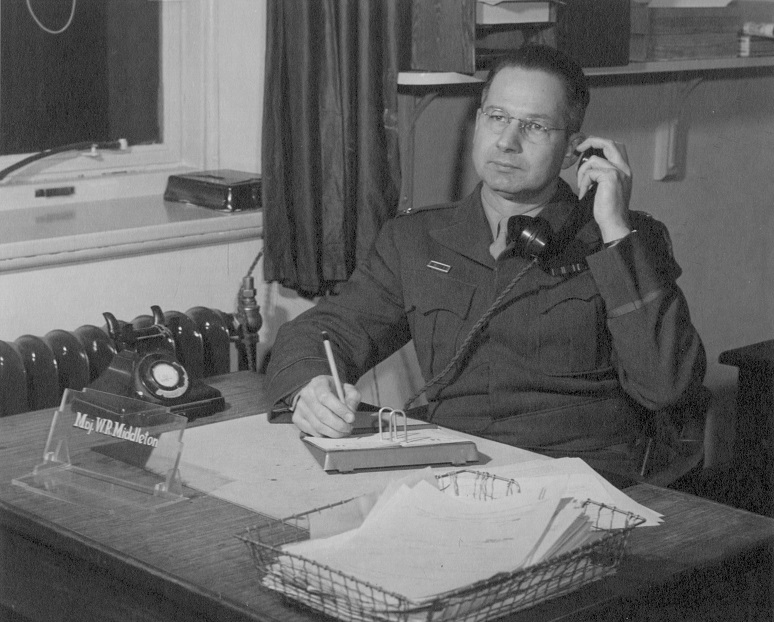 Note that's an internal version - no dialer. Check the bellset too. 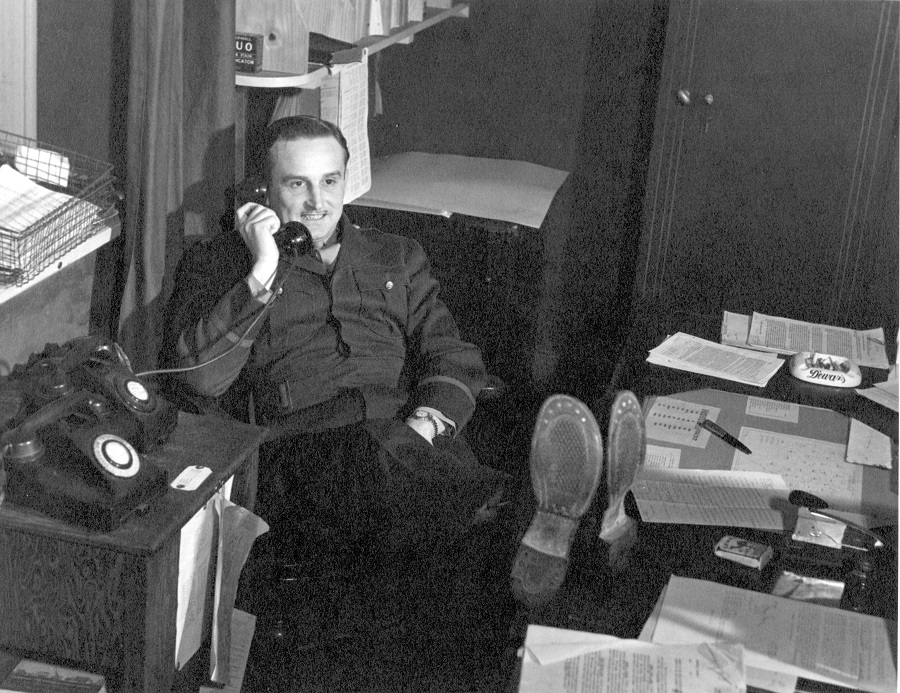 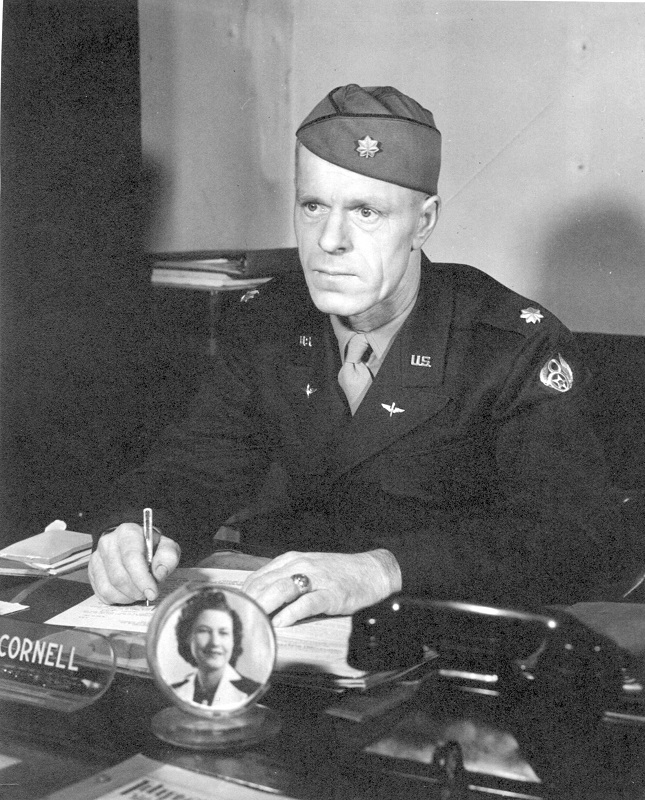 Hope these are of interest?

Micawber said:
And another...

Fantastic photos! I didn't have these... thanks! yes, I came across many American era phones with no dials as well, like you said, internal phone connections. I thought of getting one of those until this civi version came up for such a nice price.
You must log in or register to reply here.
Share:
Facebook Twitter Reddit Pinterest Tumblr WhatsApp Email Link