G for George Lancaster gunners decorated flight helmet and the story of the plane. 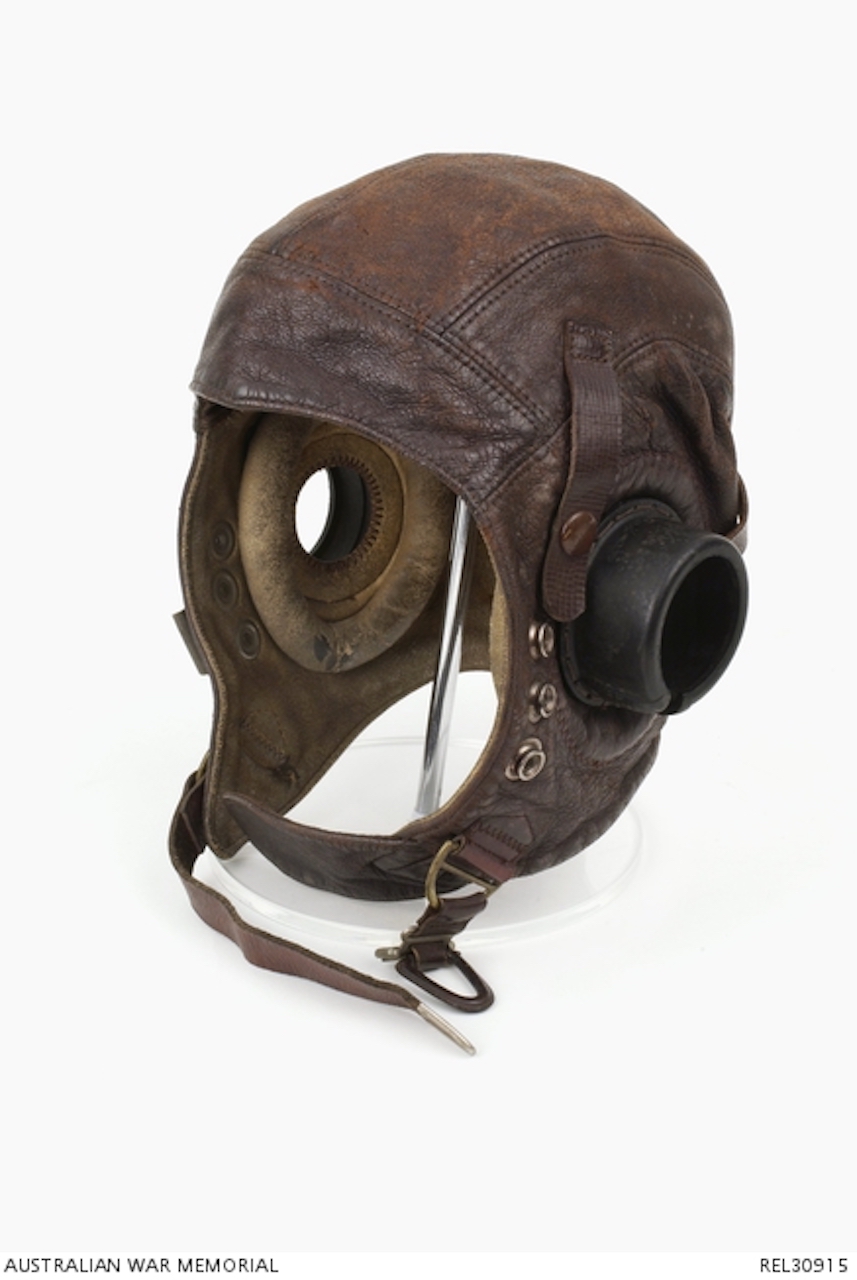 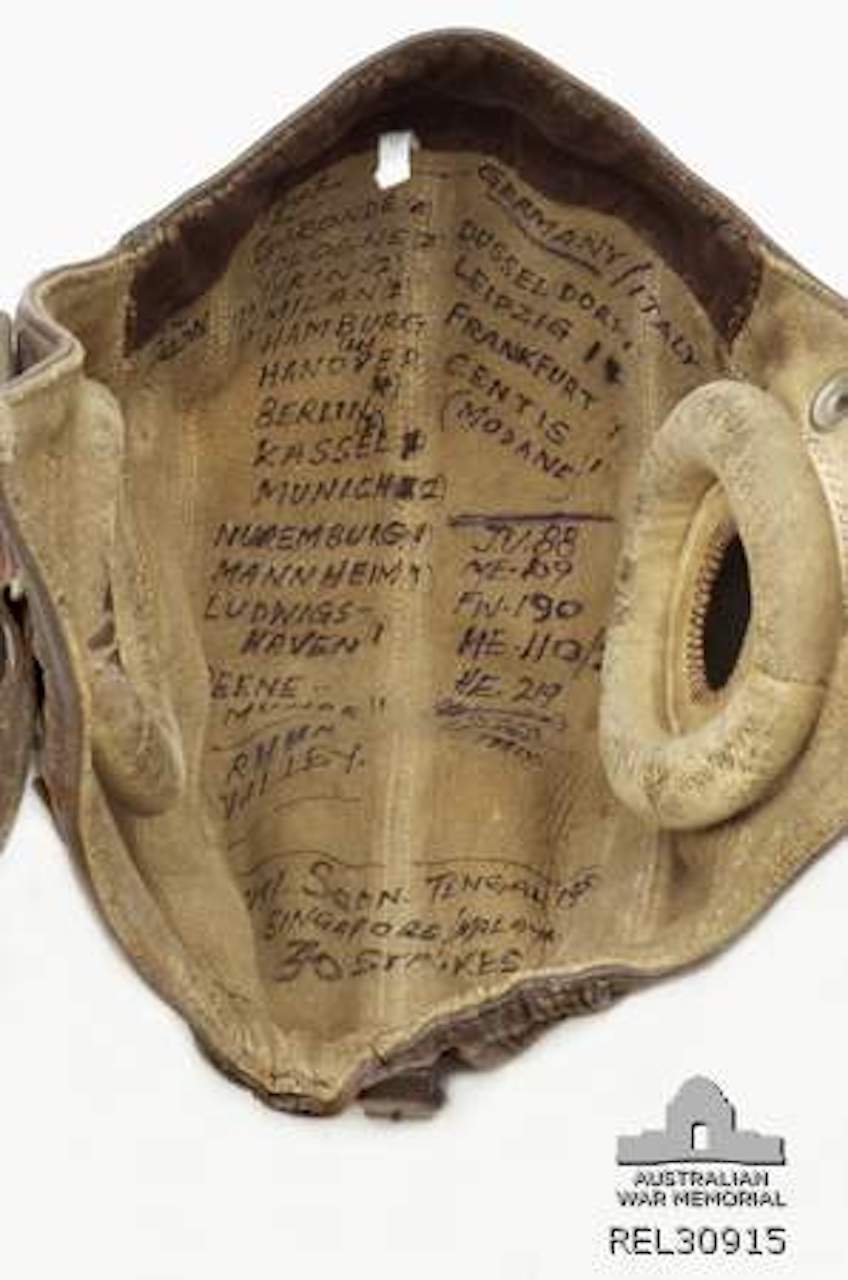 British Type C leather flying helmet
Worn by Flight Lieutenant Henry Luke ('Harry') Britton DFC, an Air Gunner (rear gunner) who served with 460 Squadron RAAF in Europe, flying in Lancaster bombers, and again in the 1950s with 1 Squadron RAAF in Malaya, flying in Lincolns. On 20 October 1943, Flight Sergeant Britton (as he then was) flew as rear gunner on a mission to Leipzig in Lancaster W4783 'G for George', the aircraft now belonging to the Australian War Memorial. This raid, Britton's 25th, was carried out in appalling weather, and was not considered successful.

The Avro Lancaster was one of the most effective bombers of the Second World War. It possessed excellent range and speed and could carry a massive bomb load, twice that of its American counterpart, the B-17 Flying Fortress.
"G for George", the Australian War Memorial's famous Lancaster, was constructed in mid-1942 by Metropolitan-Vickers Ltd in Manchester, England. Upon completion, "George" was delivered for operations to 460 Squadron, RAAF, based at Breighton in Yorkshire. Its first mission took place on 6 December 1942 against the Germany city of Mannheim.

During the next sixteen months, "G for George" carried out some 90 bombing operations against Germany, Italy and occupied Europe. These included the famous raid of 17 August 1943 against the secret German Vergeltungswaffe (vengeance weapons - V-1 and V-2) facilities at Peenemünde on the Baltic coast, as well as 15 raids against Berlin. "G for George" was an incredible survivor of the worst part of the bomber offensive and no crew members were lost in the aircraft (although 40% of them were later killed in action). The bomber's last mission was flown against Cologne on 20 April 1944; it was withdrawn from service the following day.

"George", marked AR-G, was regarded as a "lucky" aircraft, returning from eighty nine bombing operations over Europe during 1942-44. However over thirty of its former crew members were killed when flying other aircraft. 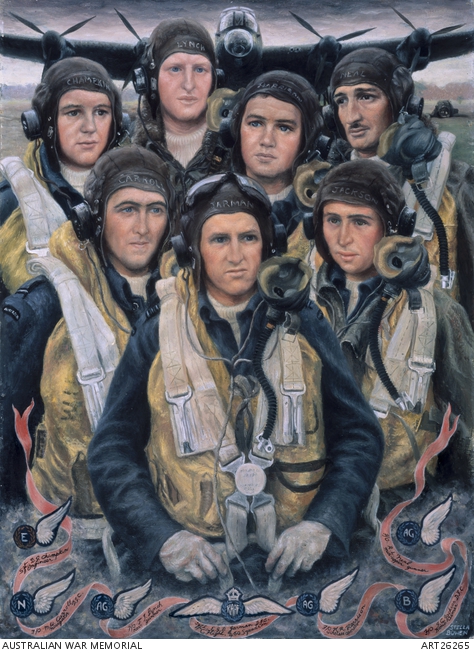 Bomber crew is a group portrait of a Lancaster bomber crew representing the young Australians involved in the air war over Europe during the Second World War. In her capacity as an official war artist, Stella Bowen was stationed with the Royal Air Force at Binbrook, Lincolnshire, where No. 460 Squadron was based. This was the most highly decorated Australian squadron in Bomber Command, but had suffered the highest casualties. Bowen was commissioned to paint a typical crew that flew Lancaster bombers on the intense bombing raids over Germany and occupied Europe.
On 27 April 1944 she began a series of pencil sketches of a bomber crew comprising of six Australians and one Englishman. Preoccupied with their flight preparations, the men expressed no particular interest in Bowen's attempt to draw them, but their bravery and youth captivated the artist. That night their operation took them over Friedrichshafen, a vital industrial centre on the shores of Lake Constance. By morning, Bowen's subjects were reported missing. The artist had only made preliminary sketches of the crew, but she returned to her London studio to complete the painting, working from pencil sketches and official photographs. She later wrote to her brother: "It was horrible having to finish the picture after the men were lost. Like painting ghosts."

One of the men, Pilot Officer Thomas Lynch, who was presumed to have perished with the rest of the crew, was eventually discovered in a German prisoner-of-war camp. He reported that the bomber was shot down in the vicinity of Lahr, near the Swiss border. The crash saw him unconscious until 4 May, when he awoke as a patient in a German air force hospital in Baden-Baden. A German doctor told him the remaining crew had been killed. Lynch himself was badly injured and spent many weeks in various hospitals. Following amputation of his right leg and more time in hospital, he was posted to Stalag IXC to await repatriation. 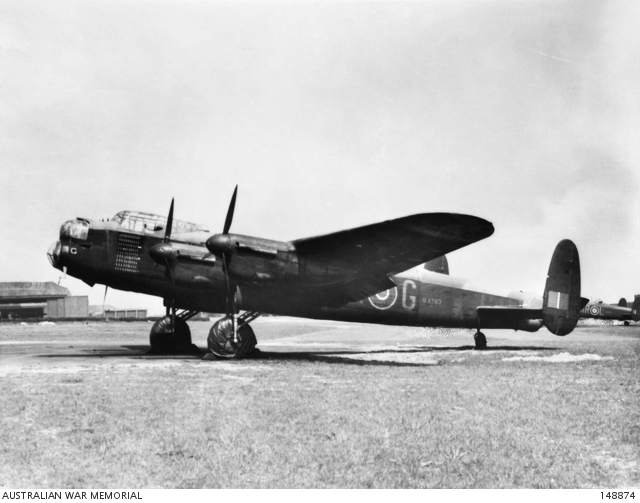 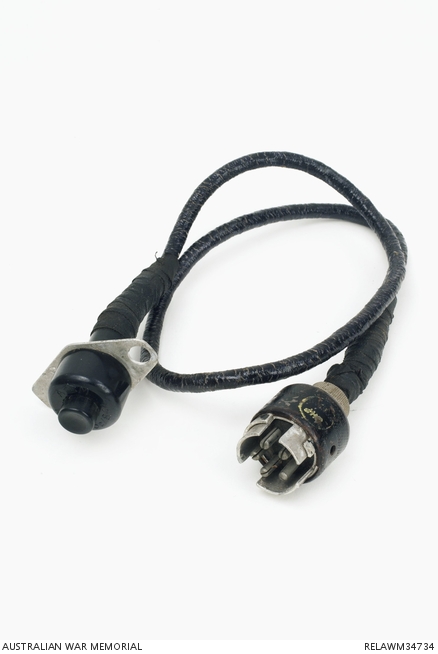 Bomb release button plugs into a socket on the bomb aimer's switch panel inside right side of the aircraft's nose. Removed from Lancaster W4783 'G for George' of 460 Squadron RAAF after this aircraft had completed 79 sorties. It is estimated that this button released 632,000 pounds (287 tonnes) of bombs on enemy targets. The aircraft flew to Australia after completing some 90 operations over enemy territory.


Some of the RAAF aircrew who flew in George all where KIA. 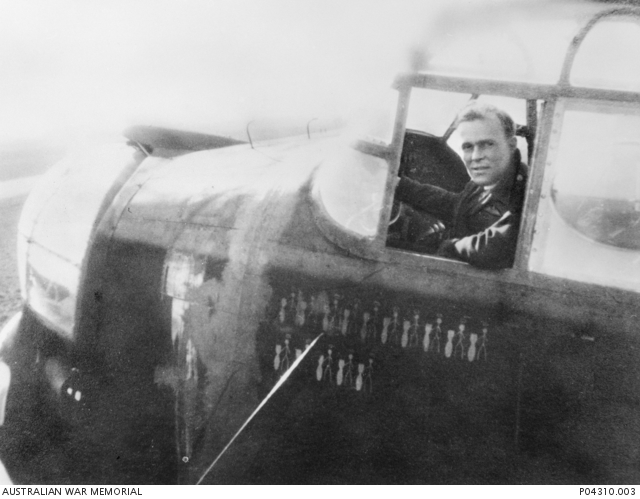 Flying Officer (FO) James Alexander 'Alec' Saint-Smith DFM, RAAF
As the first regular captain 'G for George' (W4789), he flew the aircraft on its first operational sortie to Mannheim in Germany on 6 December 1942. Flt Sgt Saint-Smith flew the aircraft on another 12 occasions, using it as his regular aircraft for the remainder of his tour, which ended in March 1943. He was awarded the Distinguished Flying Medal in March 1943 for gallantry in a mission over Berlin. Later promoted to the rank of Flying Officer, Saint-Smith undertook a second tour of operations with 627 Squadron RAF. During his 73rd operation, Saint-Smith was killed in action on 29 June 1944 when his Mosquito IV (DZ516) crashed near Vaulx, Belgium. He and his navigator, Flying Officer (FO) Geoffrey Ernest Heath DFC, DFM, RAAF (who as an NCO had served as Saint-Smith's navigator throughout his first tour of operations, with 460 Squadron) are now buried at Abbeville Communal Cemetery Extension in France. FO Saint-Smith was posthumously awarded a Distinguished Flying Cross on 24 August 1944 for his ‘conspicuous gallantry and determination' in successfully completing numerous sorties over Germany and France with 627 Squadron. 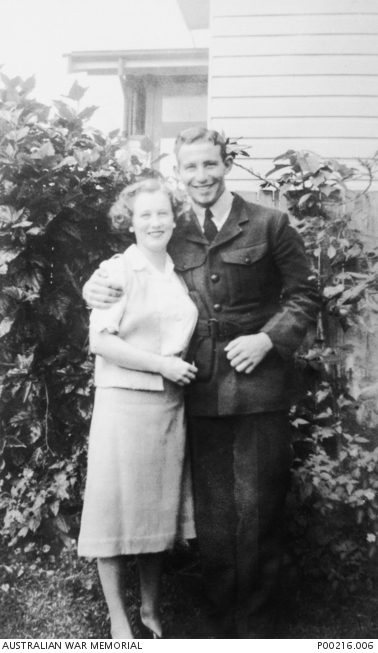 Flight Sergeant (Flt Sgt) John Francis Worley, 460 Squadron RAAF, Rear Gunner.
Flt Sgt Worley in Lancaster J Johnny took off from RAF Binbrook at 1725 hours on 27 January 1944 to bomb Berlin. Nothing was heard from the aircraft after take off and it did not return to base. Eighteen aircraft form the squadron took part in the raid. Three of these aircraft including JB637 failed to return. war it was established from German records that the aircraft was shot down in the vicinity of Werder, Germany south west of Berlin. A German resident of Stuecken about 24 miles south west of Berlin stated that on the night of 27 January 1944 a Lancaster crashed on his land and all the crew of seven were killed. This aircraft was established as being JB637. All the crew are interred in the Berlin 1939-1945 War Cemetery. 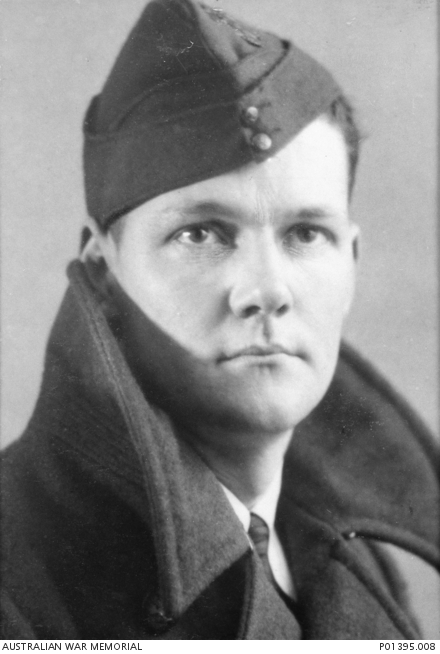 Pilot Officer Rose RAAF no known grave.
Enlisted in the RAAF in April 1941, AC Rose trained as a pilot in Australia and Canada as part of the Empire Air Training Scheme (EATS). After being posted to 460 Squadron RAAF in March 1943, he flew Lancaster bombers including G-George during an operational sortie over Duisburg on 27 April 1943. In 1943 Rose was commissioned and transferred to 156 Pathfinder Squadron RAF, where he was recommended for the Distinguished Flying Cross (DFC) for his "high reputaion as an operational pilot which has since been enhanced by his skill and determination with which he has pressed home attacks on varied targets in Germany, Italy and occupied territory" in October. On the night of 22/23 November 1943, Pilot Officer Rose was killed during an operational sortie when his Lancaster was shot down over Berlin, aged 22. He has no known grave, however a watch worn by PO Rose was uncovered by a German farmer after the war and forwarded to his next of kin. 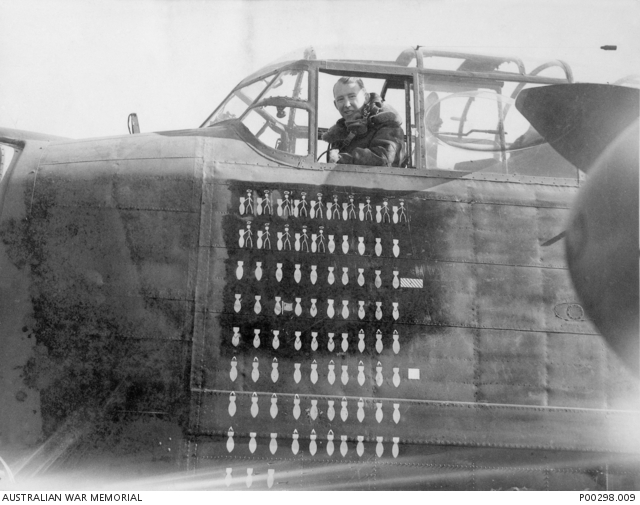 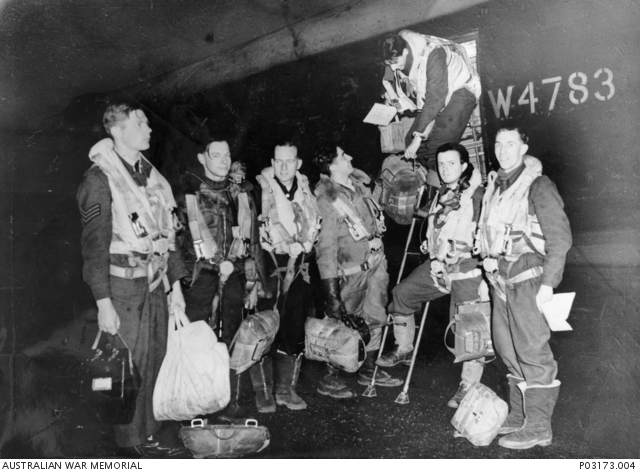 The rest of the crew, left to right, are Sgt Leonard W. Dorricott RAF, bomb aimer of Shropshire, England, who survived the war; Sgt Denny A. Page RAF, Mid Upper Gunner, of London, England; Henderson; Sgt A. E. (Tony) Perron RCAF, Rear Gunner; Whitehouse; Sgt Jimmy V. Joyce RAF, Wireless Operator of London, England; Sgt D.'Jock' Easton RAF, Engineer of Scotland. Joyce and Easton were both killed flying in W4987 with No. 460 Squadron over Hamburg on 25 July 1943 when their Lancaster crashed near Cuxhaven, where they were buried until they were both re-buried in the Becklingen War Cemetery. Sgt D. Easton, may be 1127456 Sgt David Easton RAF, who was killed flying with No. 61 Squadron RAF on 18 August 1943. Sgt D. A. Page, may be 1336423 Sgt D. A. Page RAF, who was killed flying with No. 50 Squadron RAF on 28 August 1943. G George went on to fly 90 operational missions over Germany and Europe before it was retired from operations and flown to Australia in 1944. 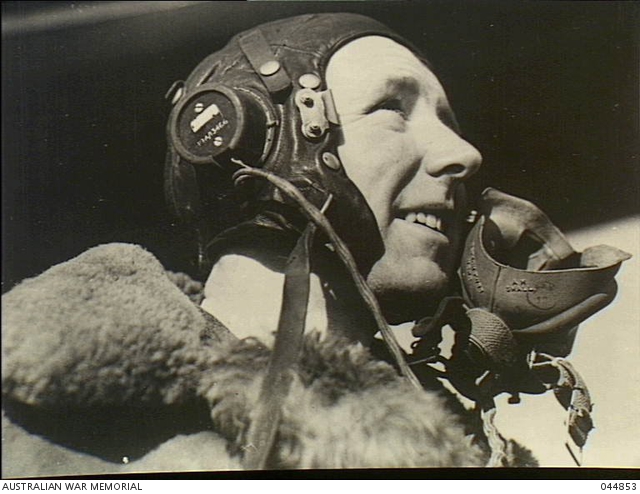 NFORMAL PORTRAIT OF FLYING LIEUTENANT A MCKINNON DFC, 460 SQUADRON, RAAF, WHO FLEW THE LANCASTER BOMBER G FOR GEORGE HE WAS LATER KILLED ON 25 MARCH 1944 DURING A RAID ON BERLIN. 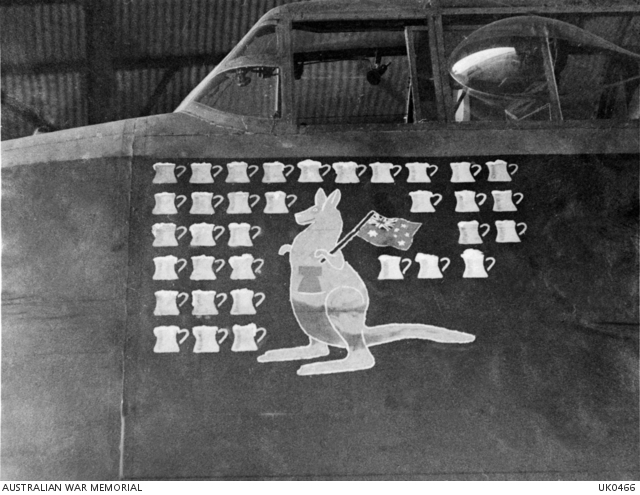 LINCOLNSHIRE, ENGLAND. 1943-08-31. EMBLEM ON "G" FOR GEORGE,BELONGING TO NO. 467 SQUADRON RAAF OF BOMBER COMMAND BASED AT RAF STATION WADDINGTON. THE FOAMING MUGS OF BEER REPRESENT RAIDS OVER ENEMY TERRITORY, THIRTY FOUR BEING REGISTERED HERE. 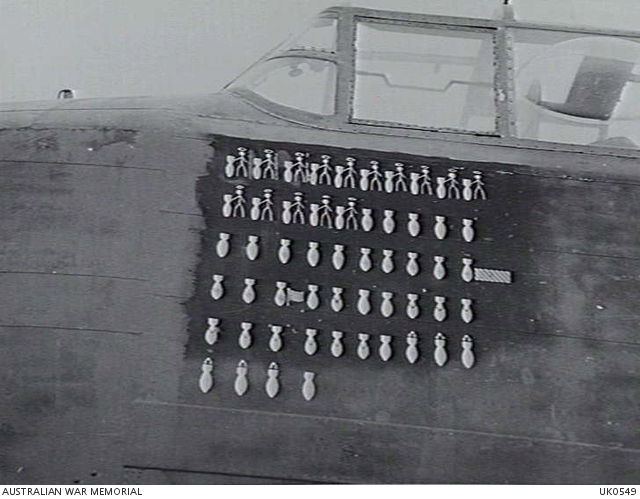 LINCOLNSHIRE, ENGLAND. 1943-09-14. "G" FOR GEORGE, A LANCASTER AIRCRAFT BELONGING TO LANCASTER NO. 460 SQUADRON RAAF OF BOMBER COMMAND, BASED AT RAF STATION BINBROOK, HAS MADE MORE OPERATIONAL FLIGHTS THAN ANY OTHER AIRCRAFT IN THE SQUADRON. THE FIFTY FOUR BOMBS PAINTED ON THE FUSELAGE REPRESENT RAIDS OVER ENEMY TERRITORY.

On display at the AWM 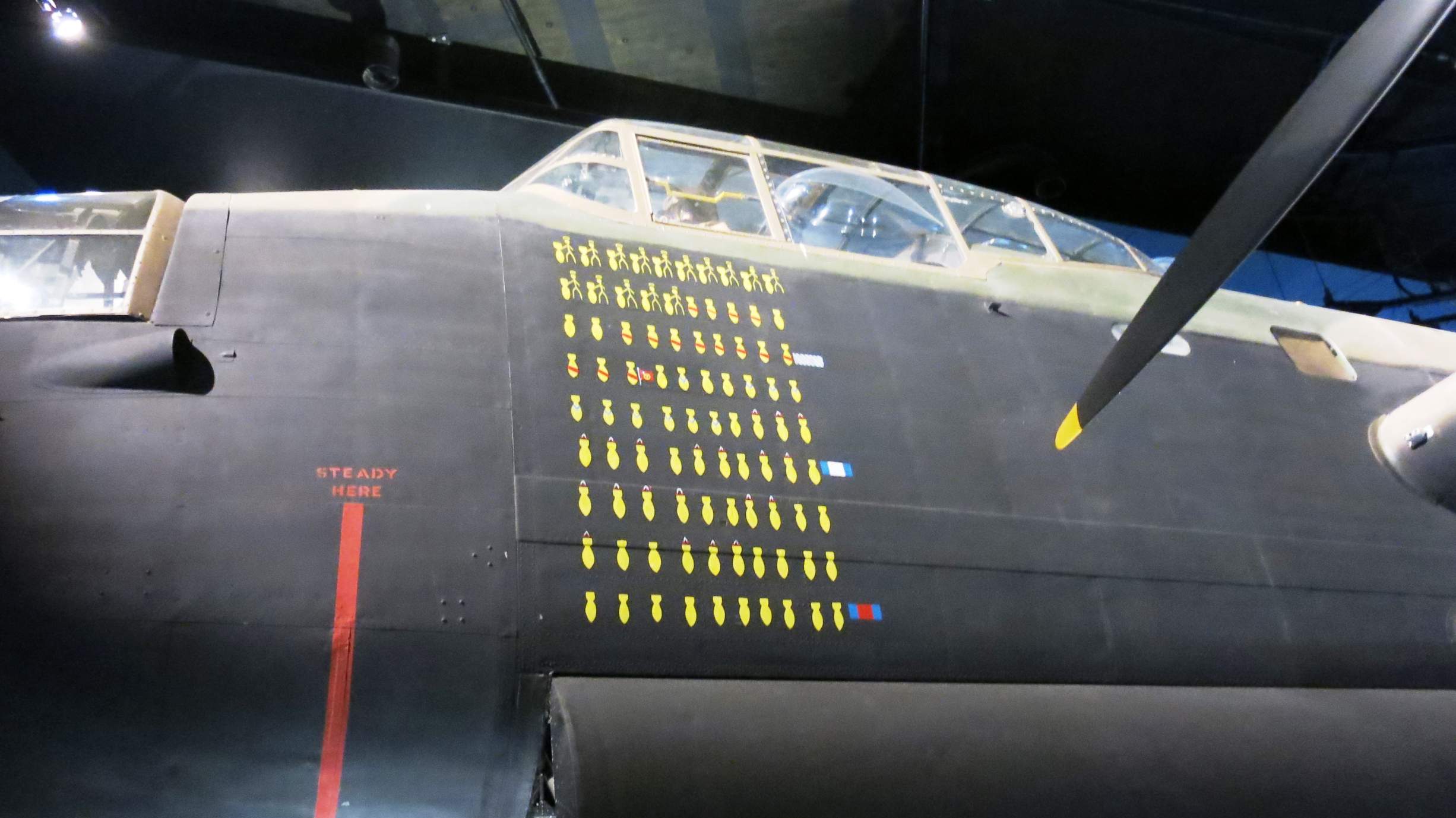 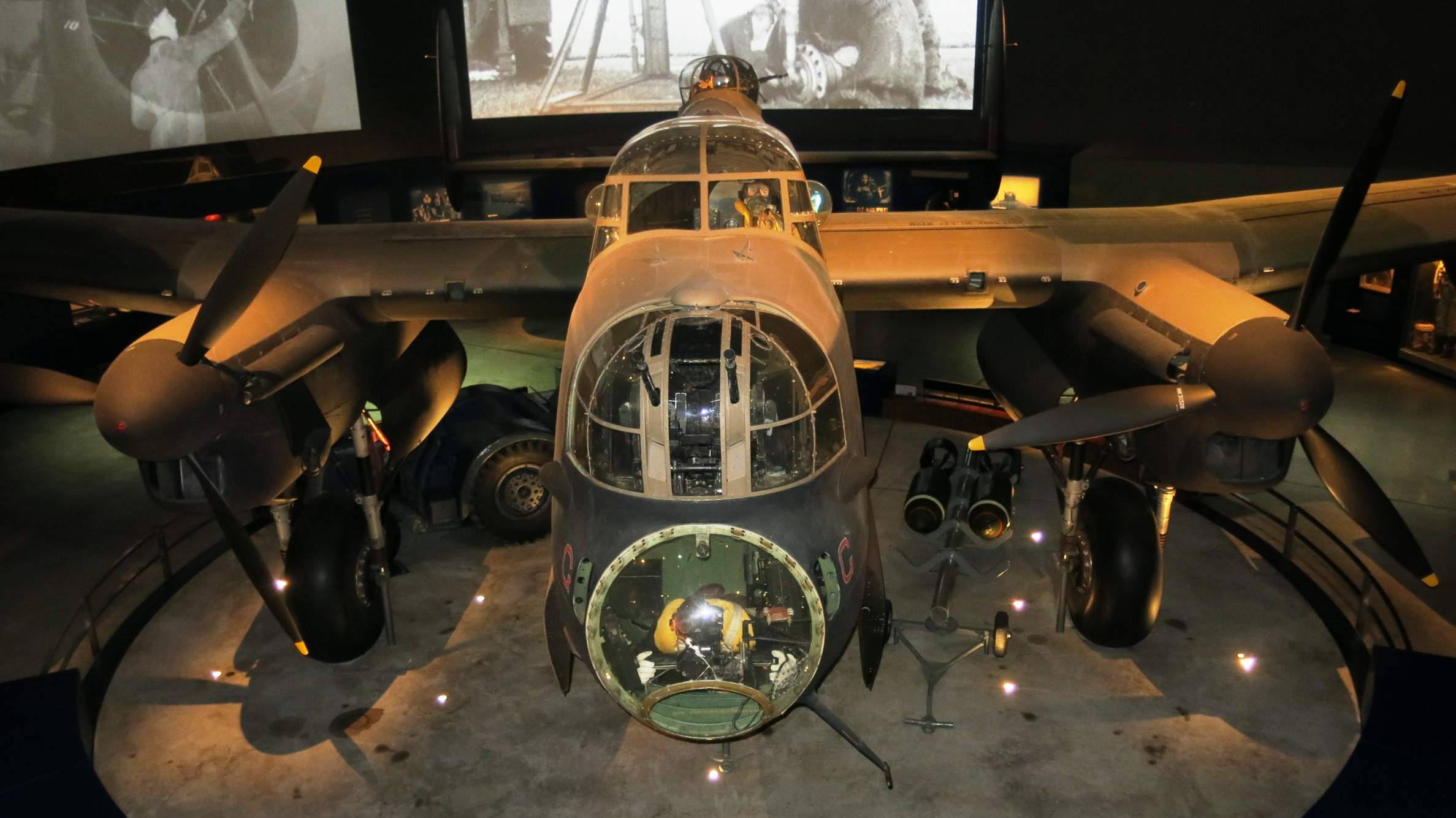 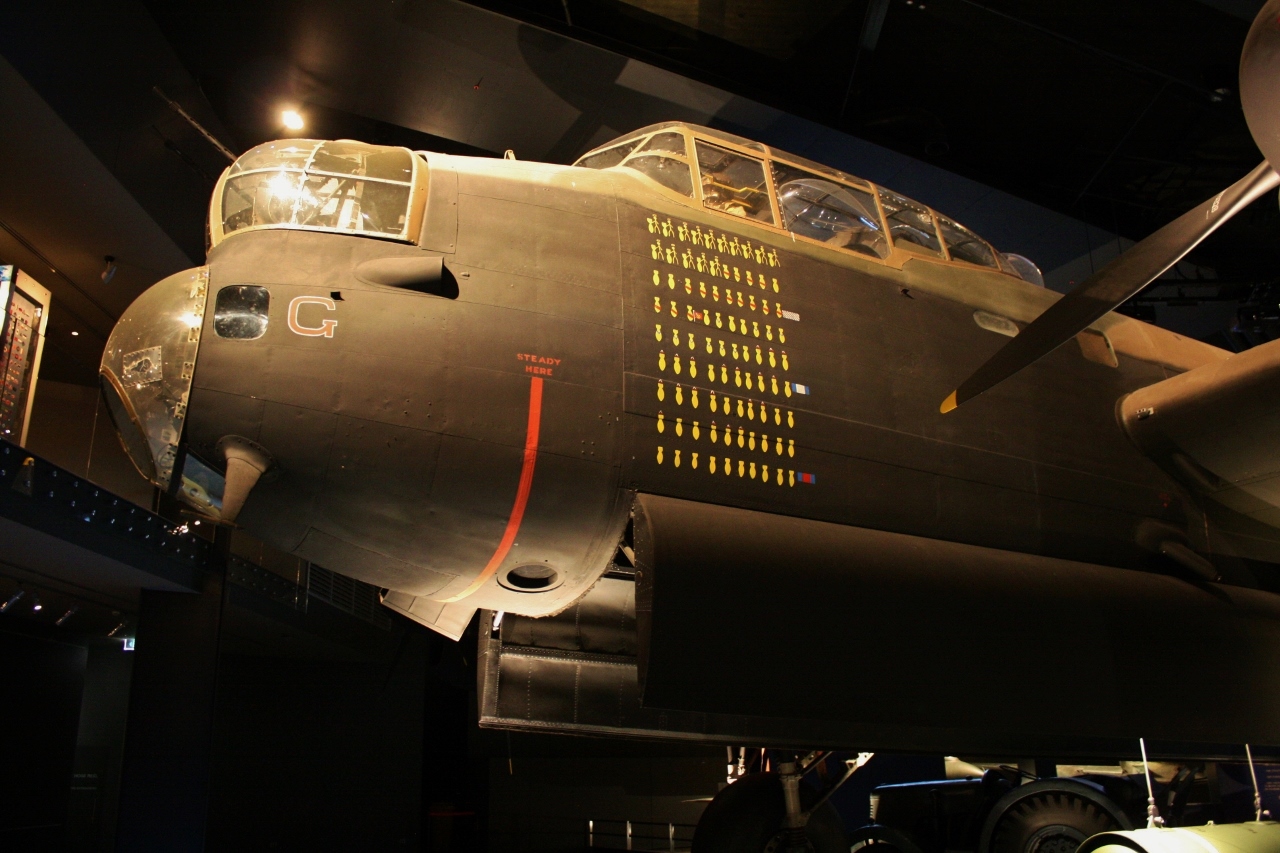 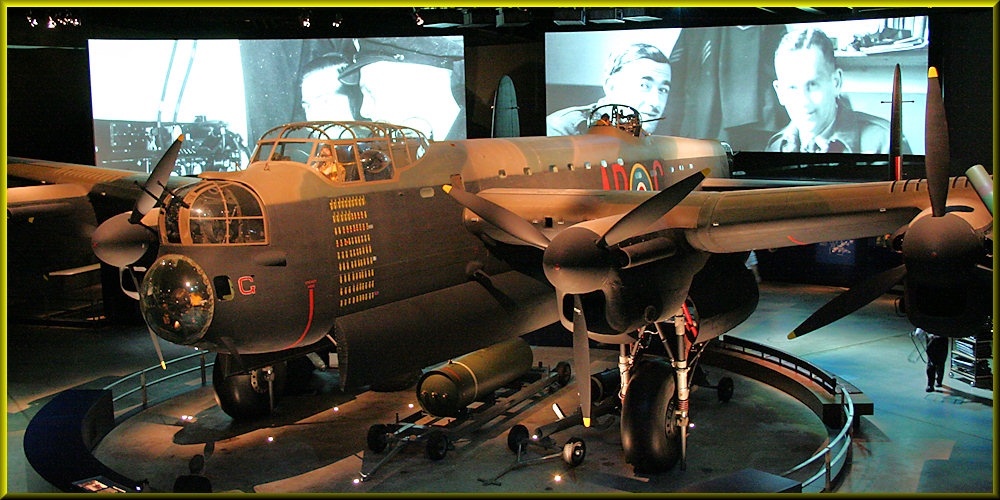 After we flew the AWM PR photographer around the site in a Huey in 2006 we had an invite to get into the aircraft. Rare privilege. After the 40th Anniversary Concert for Long Tan we not in any shape to do anything at any stage of the next day.
Well and truly blew a unique opportunity there. 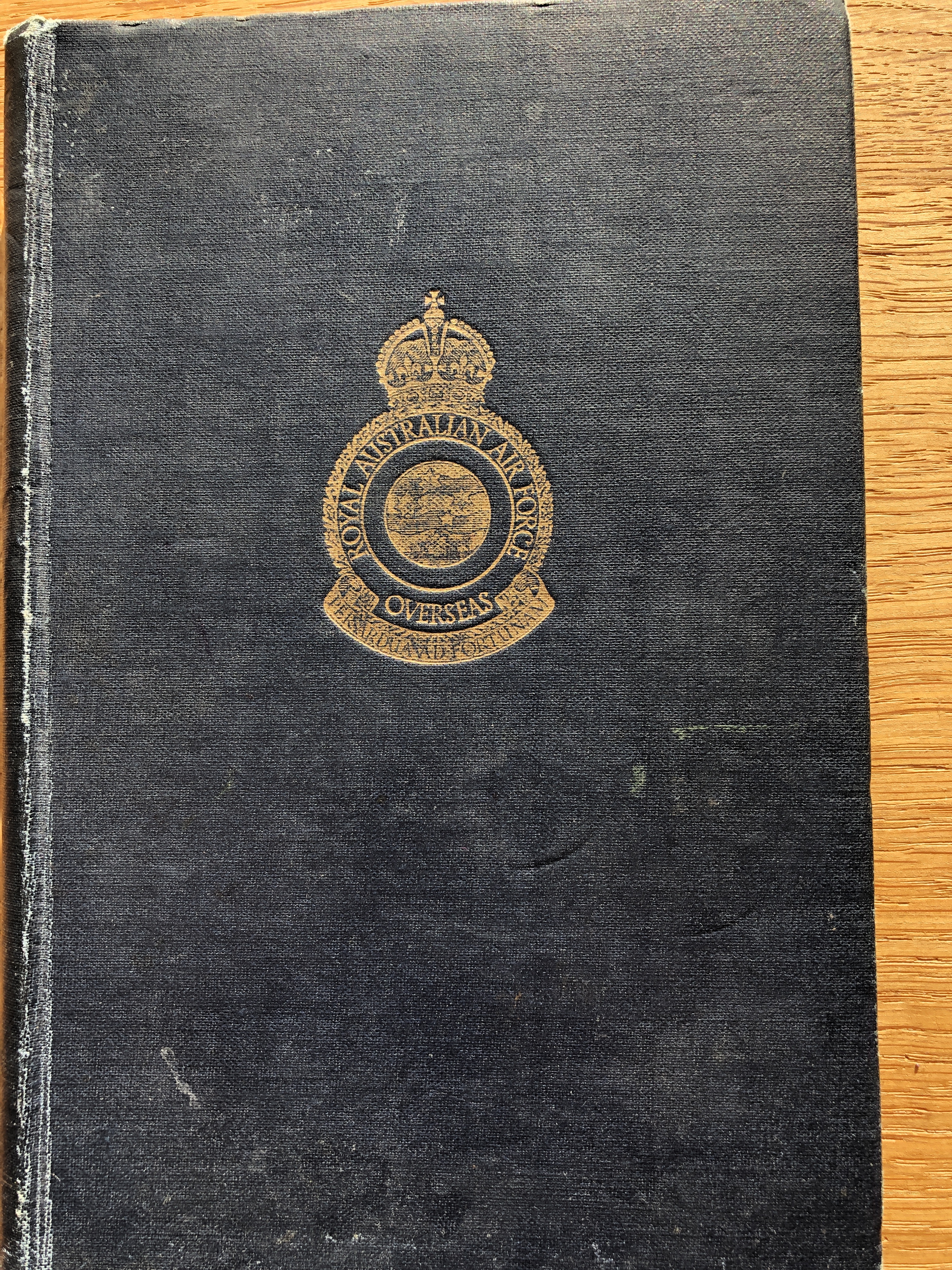 After that I was hooked on the story of G for George, which in the book.
Whenever I made a Lancaster kit (usually Airfix) it was marked up as George.
I have had this on my office wall above my desk for a long time now. 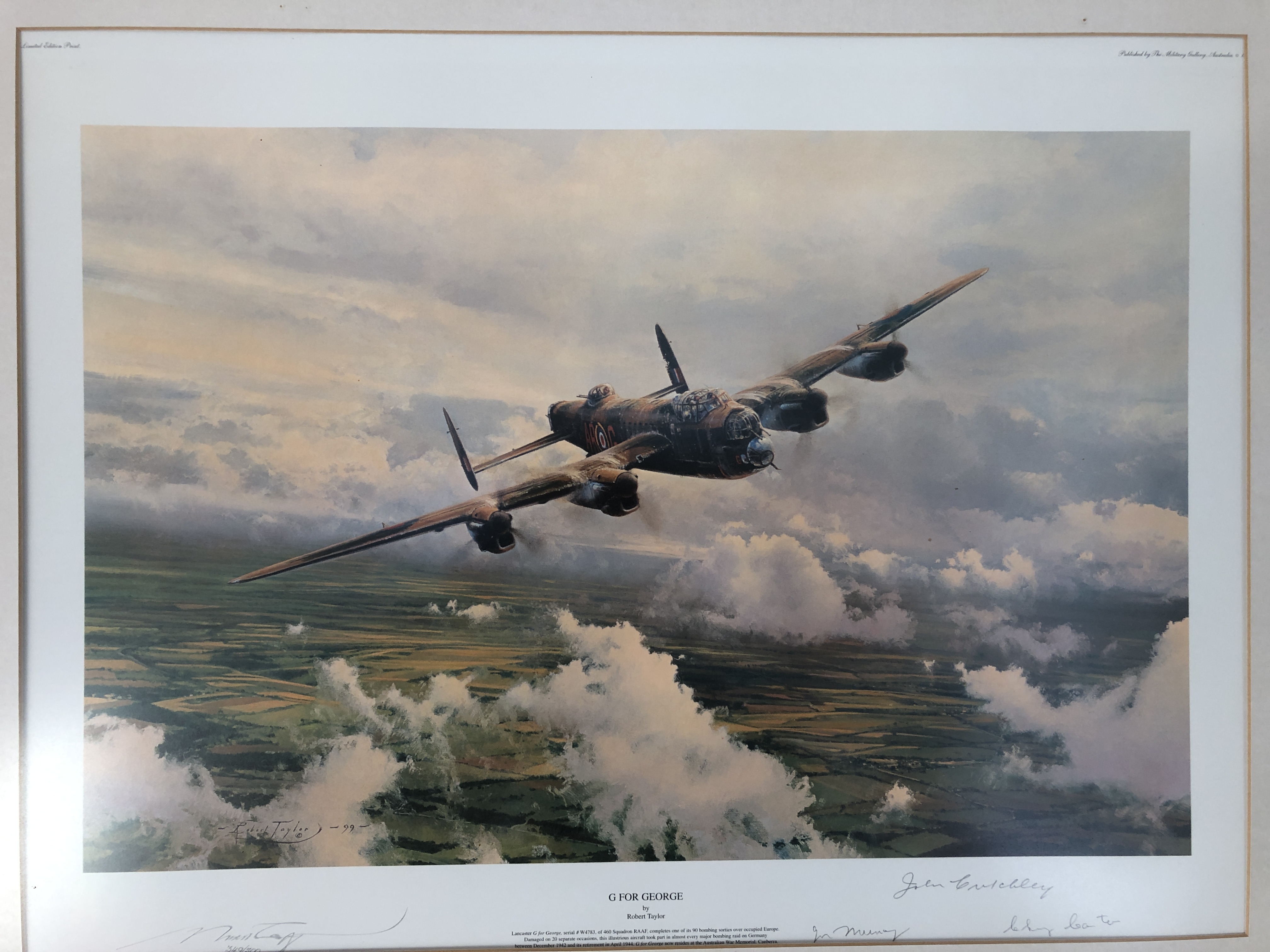 Thanks for posting the history of G for George. If I ever get to Australia I'd definitely pay a visit to the lucky lady.

That's a lovely helmet, very nice indeed. I have a B Type helmet which was signed by all the surviving members of a squadron at the fall of Singapore and it came with a photo of all the same people who are named and so its possible to identify the signatures. 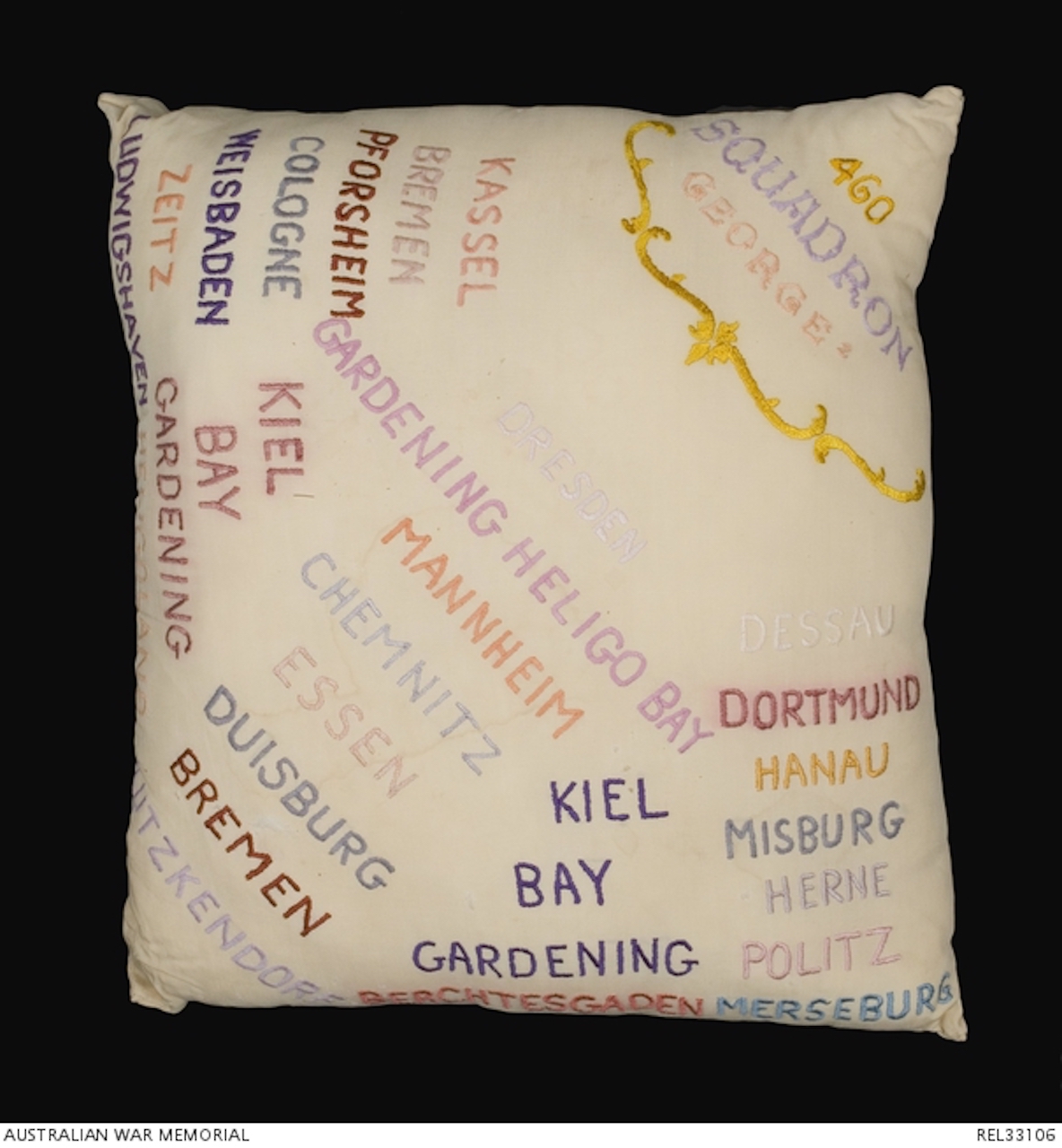 Cushion sewn by Dolly, the second cousin of Flying Officer Peter Charles Firkins, 460 Squadron, RAAF. Firkins saw Dolly frequently while serving in the United Kingdom, and the cushion was sewn by her to commemorate his service over Europe. It shows the operations and specific towns that were the targets of bombing raids in which he took part. 'Gardening' is not a specific location, but was the allied code name given to mine laying missions in enemy waters. Born in 1925, Firkins was educated at Guildford Grammar School, Western Australia. In 1943, at the age of seventeen, he joined the Royal Australian Air Force and served as an NCO rear gunner with 460 Squadron, RAAF. He had completed his tour of twenty-nine operations and received his commission before he turned nineteen. He became the historian of 460 Squadron and wrote the unit's history, 'Strike and Return' as well as several other widely read military history books, including 'The Australians in Nine Wars'. An active and prominent member of the Perth business community, Peter Firkins died at his home in Perth in late 2002. 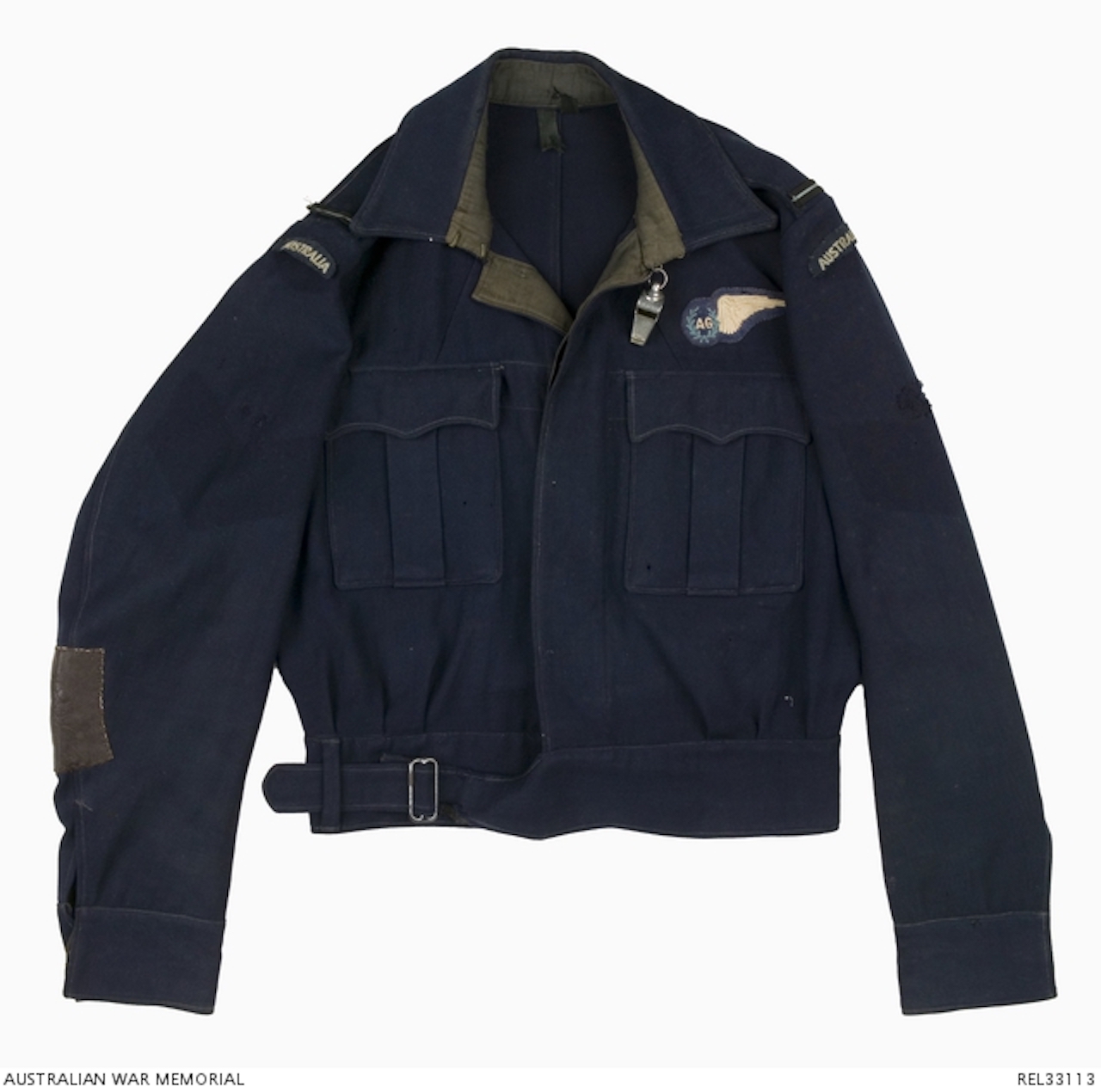 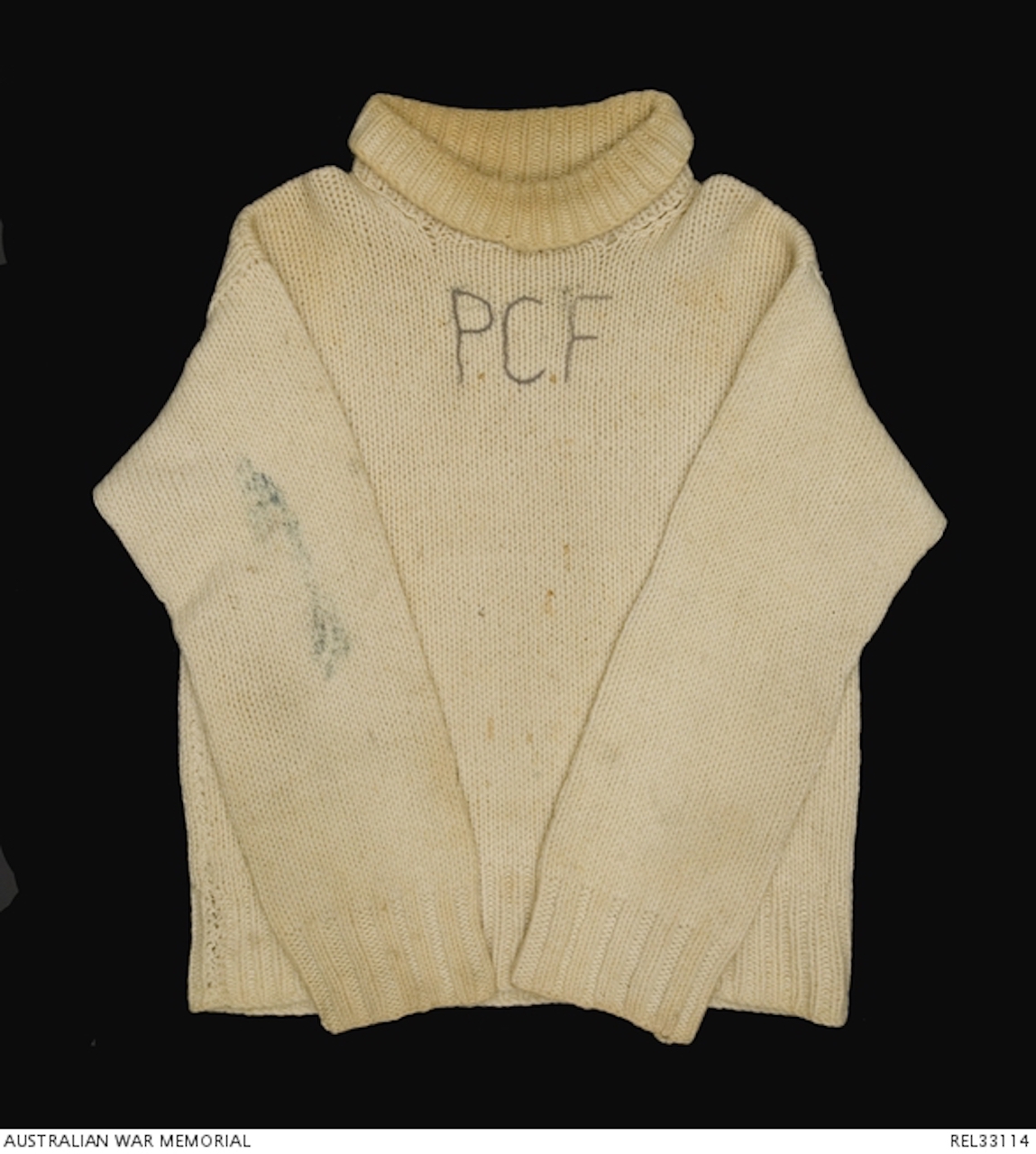 Often referred to as a 'Woolly Pully', this type of non-issue pullover was in common use during the Second World War by aircrew on cold weather operations.
This example was worn by Flying Officer Peter Charles Firkins during his service with 460 Squadron, RAAF. 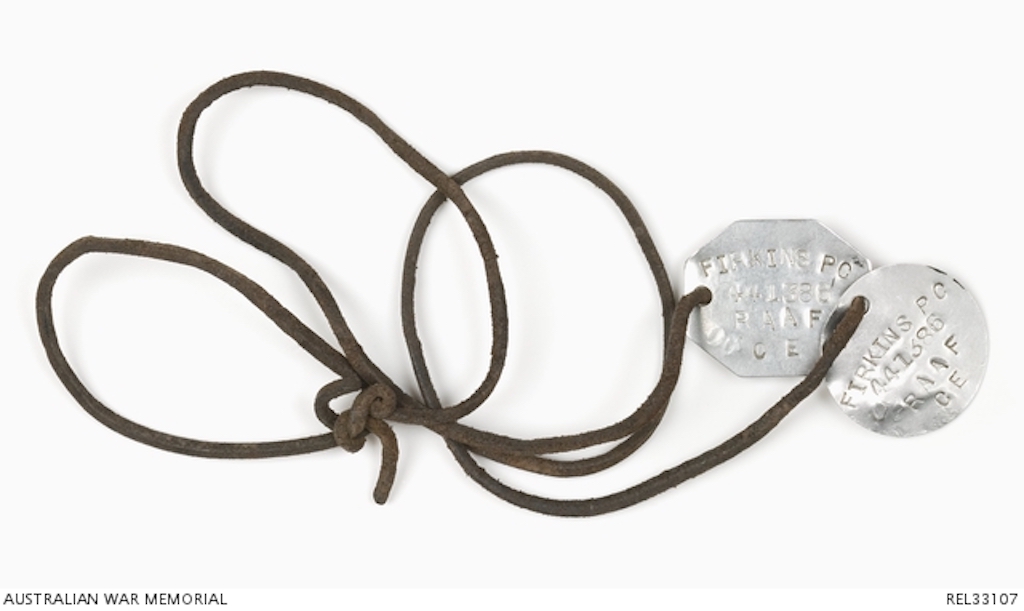 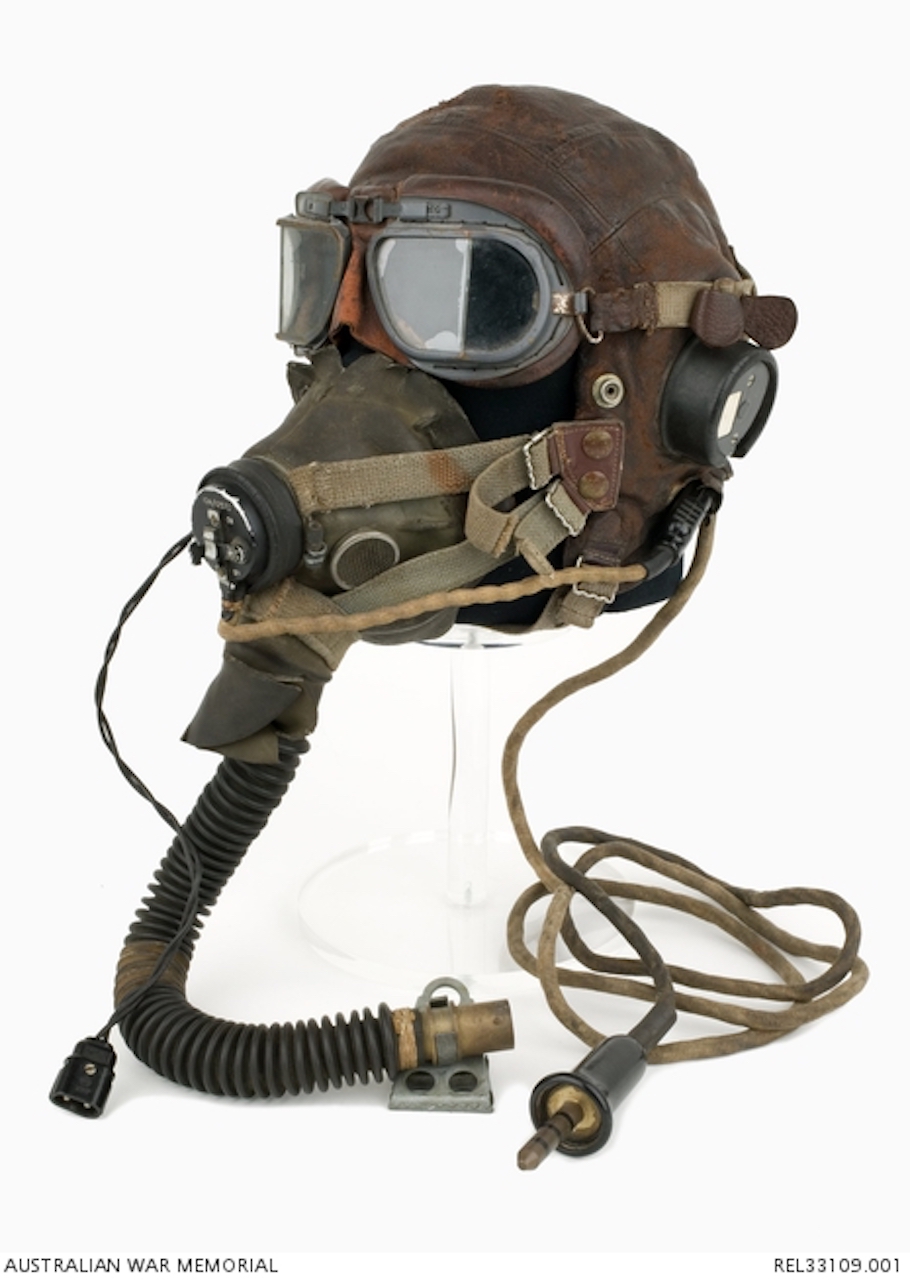 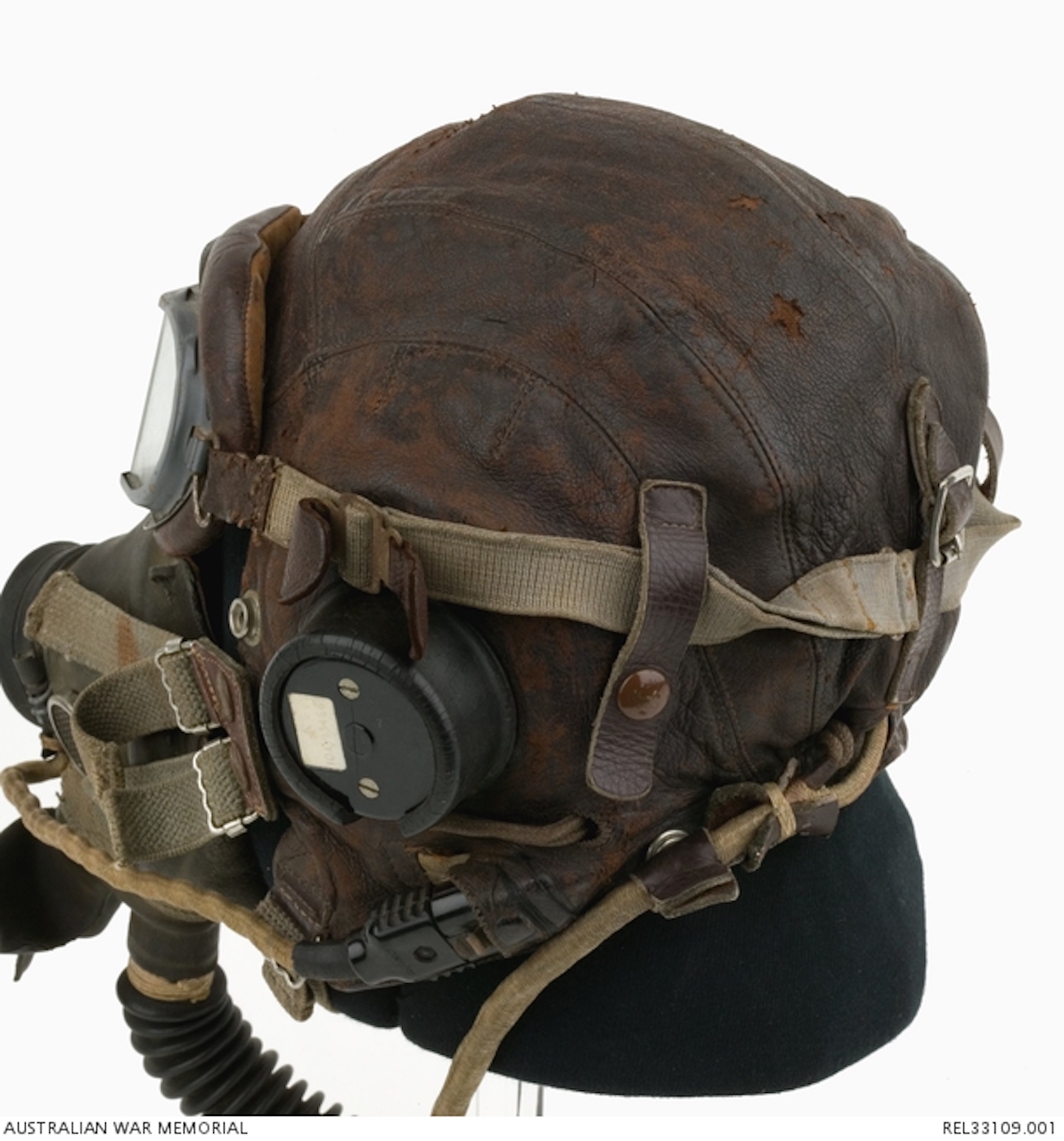 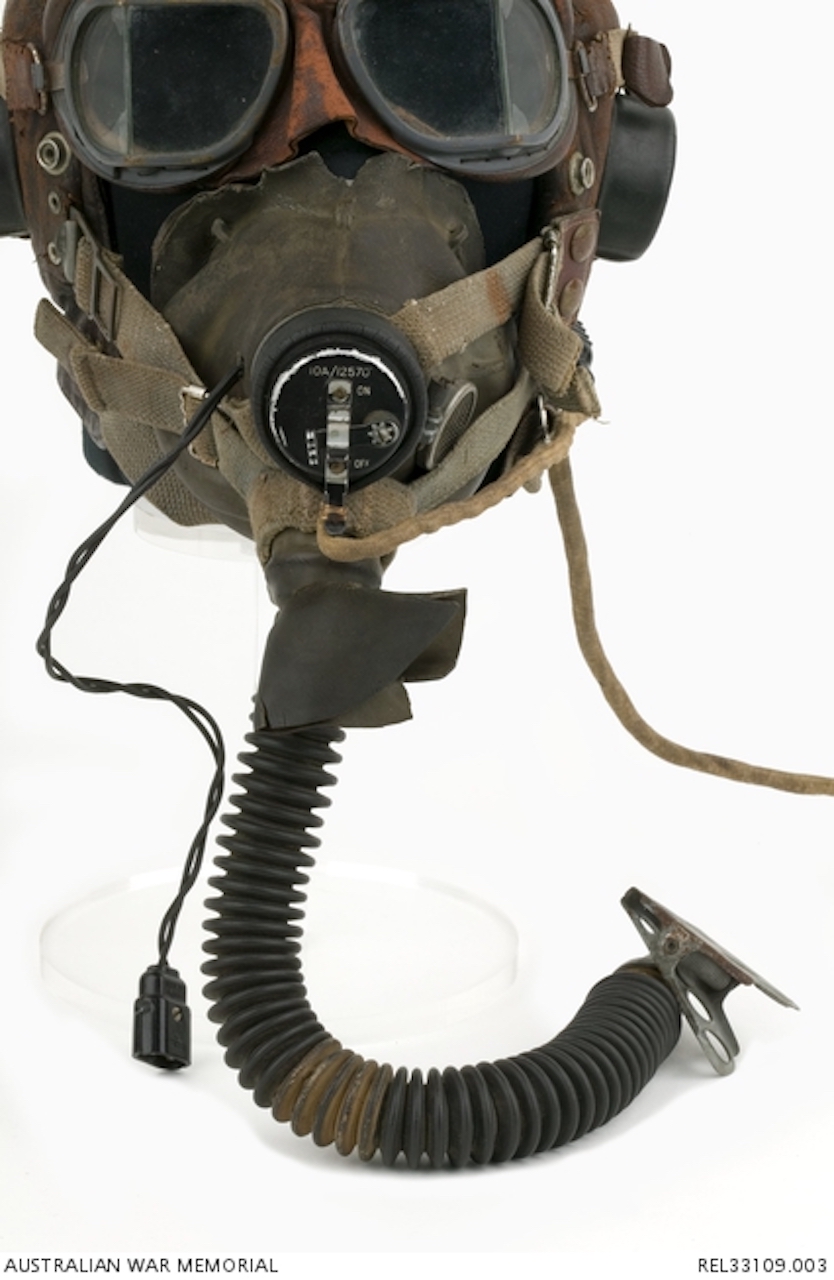 Thanks for posting... a great history of great men!

Bomber commands casualty rate was very high, 51% of aircrew were killed on operations 12% were killed or wounded in non-operational accidents and 13% became POW's or evaders. Only 24% survived the war unscathed.
Over thirty airmen who flew in George where KIA in other aircraft.
H

I'm late to this post but wanted to show a rare hand-coloured large artwork on card commemorating G-George achieving 79 Ops on the 5th Jan 1944. I assume produced for the crew at the time the significance of 79 Ops could be that George was the first Lancaster to reach that number but I haven't managed to confirm that. I picked the artwork from a book/ephemera dealer who didn't realise the significance or rarity of the item.