AUTOMOTIVE CLOTHING: WHEREIN A FINE ARTIST ENVISIONS THE BOMBER JACKET AS A WAY TO PROMOTE HIS AUTOMOTIVE PORTRAITS

When I was a kid in Michigan, there were still plenty of WWII veterans out and about, and more recently Korean war vets.

A lot of them, and their sons, on weekends in winter, sported fighter jackets, also sometimes called bomber jackets

I am nominating that classic two front pocket style as the model for the perfect sports car/hot rod jacket. I am talking waist length only, no longer. For a long time they were called "Eisenhower" jackets, as Ike wore those often in Europe during the war in Europe.

Why am I nominating this jacket? Because, other than a blue cotton denim jacket, no other casual jacket carries such a huge weight of tradition behind it. The style actually goes back to WWI.

I found out about their desirability in Malibu where I occasionally attend an early morning Cars 'N Coffee. Now Malibu has some highly unusual demographics. Like only 13,000 residents but on weekends maybe 50,000 visitors.

Plus every home is worth one million. And the most expensive is up around $150 million (though you might call Cher’s beachside digs a “compound” since there are several houses behind the 12-foot walls)

And yet, at these cars and coffee car shows, which usually began at sparrow’s fart, say, 7 am, what do you see locals wearing? Denim jackets, the kind that can be found for $5 at a swap meet and leather jackets that it look like the one that granpa wore over in Korea on those bombing runs.

What these rich swells like to do is “dress down” in the morning so no one suspects that they are the guy in that new Netflix series or that they could buy that battered Rolex you’re carrying with pocket change. And it’s almost laughable how tattered a leather jacket they want. They not only want leather but "distressed" leather. Nothing is worse to them than wearing a jacket that looks like you just bought it yesterday.

And the style leader for this movement is none other than that ultimate taste arbiter of car collecting, Ralph Lauren. Nobody can question Ralphs taste in cars--in Ferraris for instance, he owns the most desirable of all, a 250GTO. In clothing, he’s been a master arbeiter of taste for the last 50 years. He’s been wrong on some trends (sorry, Ralph, nobody’s worn pin collars for 30 years) but on the distressed leather bombers, I gotta say he's right on. He’s found a way to make them look like they’ve been worn every day for 40 years (except for pristine linings and cuffs) and that’s pretty hard to imagine when the guy wearing them is some 20 year old Junior from Pepperdine Malibu.

Why not just collect the real ones? The war-time ones with the military insignias? One problem is that the real ones were usually cowhide, and to me that's a hard surfaced material, not warm and friendly. I prefer ultimately lambskin. Some kind of soft leather. And the color? I am betting most military ones were brown, so I’ve been collecting jackets that are brown, all shades of brown (except light tan) but definitely not black, which I identify (if they have lots of zippers) with Marlon Brando in The Wild Ones. And if they're really long and black, well, we all know who wore full length black leather coats in WWII. Definitely not the good guys....

And of course an original bomber jacket might have a nametag attached. It’s almost sacrilegious to remove the nametag of someone who earned that jacket while serving. And the patches, now I haven’t figured out if the patches on Ralph's pseudo-military jackets are real military patches or not. Because most of the patches are camouflage green and black, I suppose I could dye any patches on a vintage jacket I buy that color scheme but there’s something about dying a red, white and blue American flag olive green that grinds my teeth.

I'm coming at these jackets not as a would-be clothier (rest easy, Ralph) but as a fine artist, (what the French call a "primitif," their supercilious phrase for "self-taught") One day I figured, what would be a better incentive for someone to commission one of my $600 portraits of their collector car than to first paint the portrait on a 20” x 30” canvas, and then, after presenting the painting, to present them with a leather fighter/combat jacket bearing an image of that same painting? To get the ball rolling, the first few I made sport a little tagline at the bottom telling folks that notice it where they can order a painting , but for the customers commissioning my fine art automotive portraits, the portraits reproduced on their jacket will be free of hoopla. By the way I tried denim jackets first, but figured that since, n my neck of the woods , you can still buy one for $5 at a swap meet, there's no upside since it costs me the same to print the image and have it sewn on using denim as it does on leather. And after I visited the RL Ranch store on Melrose (fashionable street in Los Angeles) and saw one leather bomber jacket for $2200 and another for $2600, I figured there is no theoretical top end price in leather.

I have had some success so far. An owner of a newish Ferrari and a recent Porsche took a jacket in advance of me painting his car's portrait but the jacket that fit best (he tried some from a trunkfull I had brought) had the wrong Ferrari on the back.

" No problem, I sez " I'll switch the car on the back to your own car once I finish the portrait." He’s the perfect customer in a way because he’s a well heeled executive in a beach community who likes to “dress down “ in the morning, where in the winter, it can be, yes, egad...all of 45 deg. F (I know that makes you East Coasters laugh, that we on the Coast think that’s cold).

Presently the jackets have nothing on the front, no name tag, no pseudo military badges. Some of the early ones had the Ferrari prancing horse on the sleeve.

I’m still working out the details but think I'm on the right path. After all. no less than Ralph is blazing the way with his bomber jackets. Pathfinder on the mission or whatever they call it.

For myself, I picked the softest leather one from the stack and it gives me great pleasure to wear it. It’s got a detachable fur collar. Twice at events, photographers from the media asked to photograph me in it. And that collar. Not a little mousy bit of fur but long black fur, say 5”. I don’t care that they outlawed the sale of new fur in Beverly Hills, I’m originally from Michigan and plan to tell any critics of wearing fur that back in the Wolverine State we not only ate what we killed but wore it (well, I heard they did, that happened less and less after the ‘50s.)

Why not just sell automotive-themed jackets and forget about paintings? Well, that would put me in the clothing field and I kind of like being a fine artist even if the French call me a primitif.....

Welcome to the forum Bitz.
You’ve got a lot to learn about “Bomber Jackets’’, but we’re a friendly group and if you’re really interested in learning about A2, B-3, B-6, B-10, Irvin, M-422 , and G-1 “leather” jackets and not just peddling your own personal infomercial, we’ll be glad to help you learn about the hobby.
So welcome to VLJ.
B

Thanks. As I get into it more I want to find out about
1.) are Ralph Lauren's military spray on i.d.s close to real ones? I seem to remember during Korean war American planes had a white star but no horizontal lines next to them.
2.) Ralph's name label, does anything think it's odd to have his name on the front of the jacket instead of the jacket owner? Do some buyers go to a military nametag site and order one in their name to replace the Ralph Lauren name?

3. Finally one of my favorite auto executives, when I saw him wearing a leather flight jacket, a dark color, had his name on it in bas relief (projecting out from the surface in script) the same color as the jacket
which I thought was really subtle. How do you do that? Maybe there's iron-on script lettering one can order?

Also I just found ads for a Cpt. Steve Rogers jacket sold by Ralph Lauren. I gather Steve Rogers is some fictional character. So this one has the name Steve Rogers in the nametag on the front. Opinions, anyone?

Hi Bitz!
Glad to see you wrote back and that your a real person as opposed to some of the spam posts we get from dealers trying to market their wares. I’d be happy to correspond with you and to try and help you find out more information about vintage and reproduction jackets , particularly military ones.
All of the jackets you asked about including most ( not all ) Ralph Lauren jackets are what we call “Mall Jackets “ or commercially produced jackets with little or no actual resemblance to original WWII flight jackets . So stand by because as other people join in here your about to get a firehose full of information that will be hard to process all at once.
The first thing is that not all original WWII and Korean military flight jackets were made from leather. Most were made from horsehide, goatskin and sheepskin. The US Army Air Force A2 jacket was made predominantly from Horsehide, Cow leather and Goat Skin. High End repros of these jackets are available today from companies like Aero Leather, Eastman Leather and Good Wear Leather. Take a look at those websites and you’ll be surprised at the level of authenticity that the makers go through when making these jackets . Right down to counting the number of stitches per inch .I’m at the gym right now so I’ll get back with you in a bit but I wanted to respond to you. We’ll talk again shortly.
Cheers Bitz

edit and add on
If you’ve had a chance to check those sites I’m sure as an artisan you can appreciate the minuet detail and the extreme research and development the makers of those jackets put into their products to make those jackets as close to an original WWII jacket as possible . It also accounts for the high prices they charge for their jackets . As you can see not at all something that’s sold in a mall for 75 or 80 dollars . Ok . Enough for now let me know what questions you have after you’ve looked at those websites and we’ll chat again.
Cheers
Last edited: Feb 29, 2020

Bitzman said:
Also I just found ads for a Cpt. Steve Rogers jacket sold by Ralph Lauren. I gather Steve Rogers is some fictional character. So this one has the name Steve Rogers in the nametag on the front. Opinions, anyone?
Click to expand...

google is your friend here... 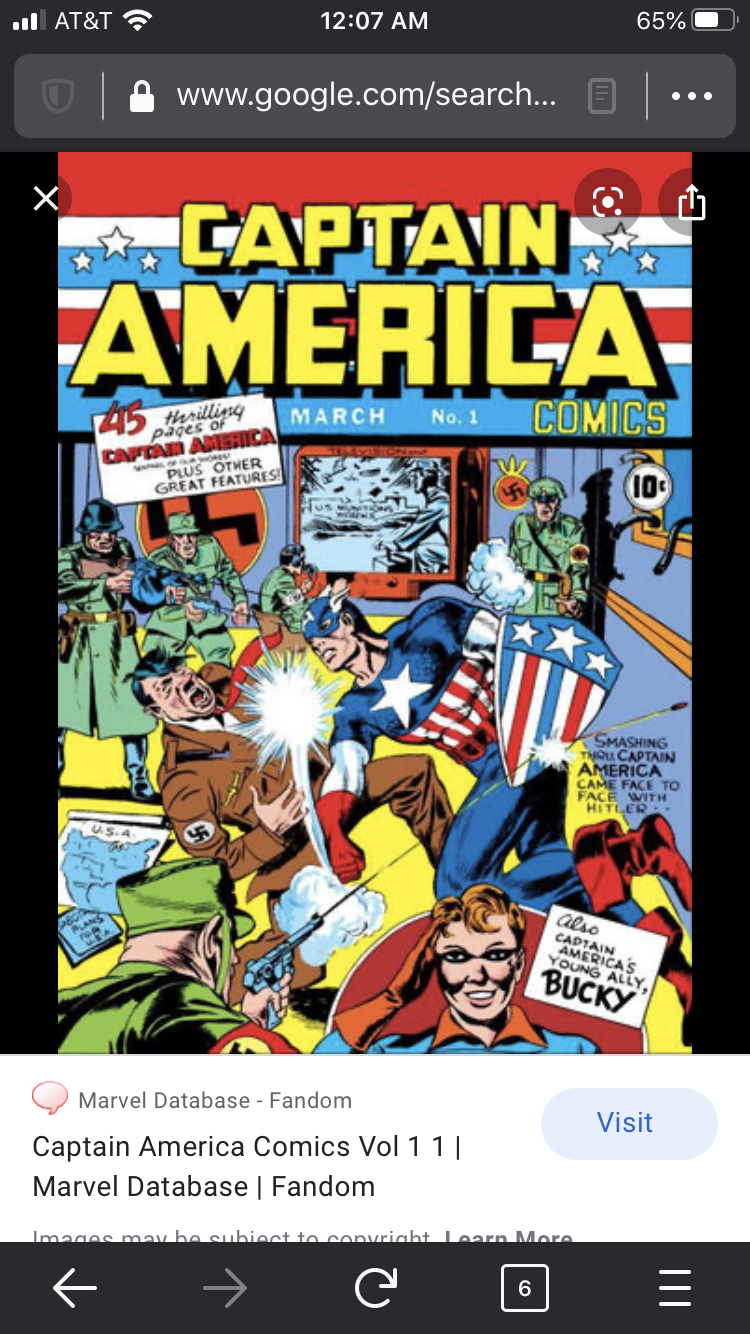