Hi everyone, I would like to share and ask for info on this USN jacket, I'm guessing/hoping it is an M422a that has been heavily used and refurbished post ww2 for the Korean war era?
It has multiple stitch holes behind the name tag indicating multiple owners. It has been relined at least once, collar seems to be redone, re-cuffed multiple times yet the waistband may be the original of the rib rack type. Inner pocket is light cotton lined and the front outer pockets are brown cotton lined.
The shoulder patch is 'carrier air group 17 fraternitas' which I initially thought dated from the early 50s but I have since found evidence of Vietnam war era action, but I believe this patch to be the earlier felted type rather than the later machine embroidered type. There is also stitch holes on the right chest where a large circular type patch has been removed.
Any further information would be much appreciated. 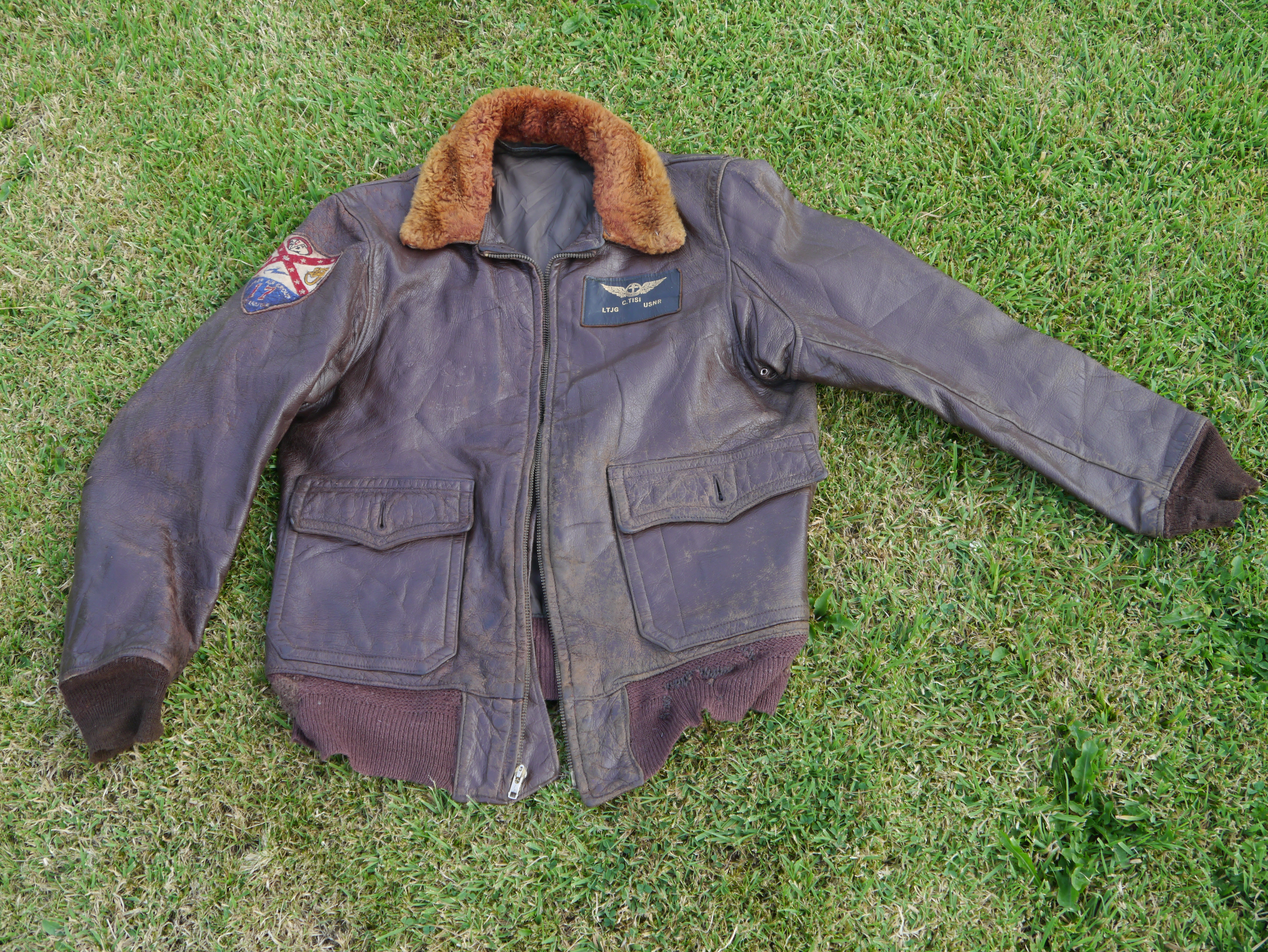 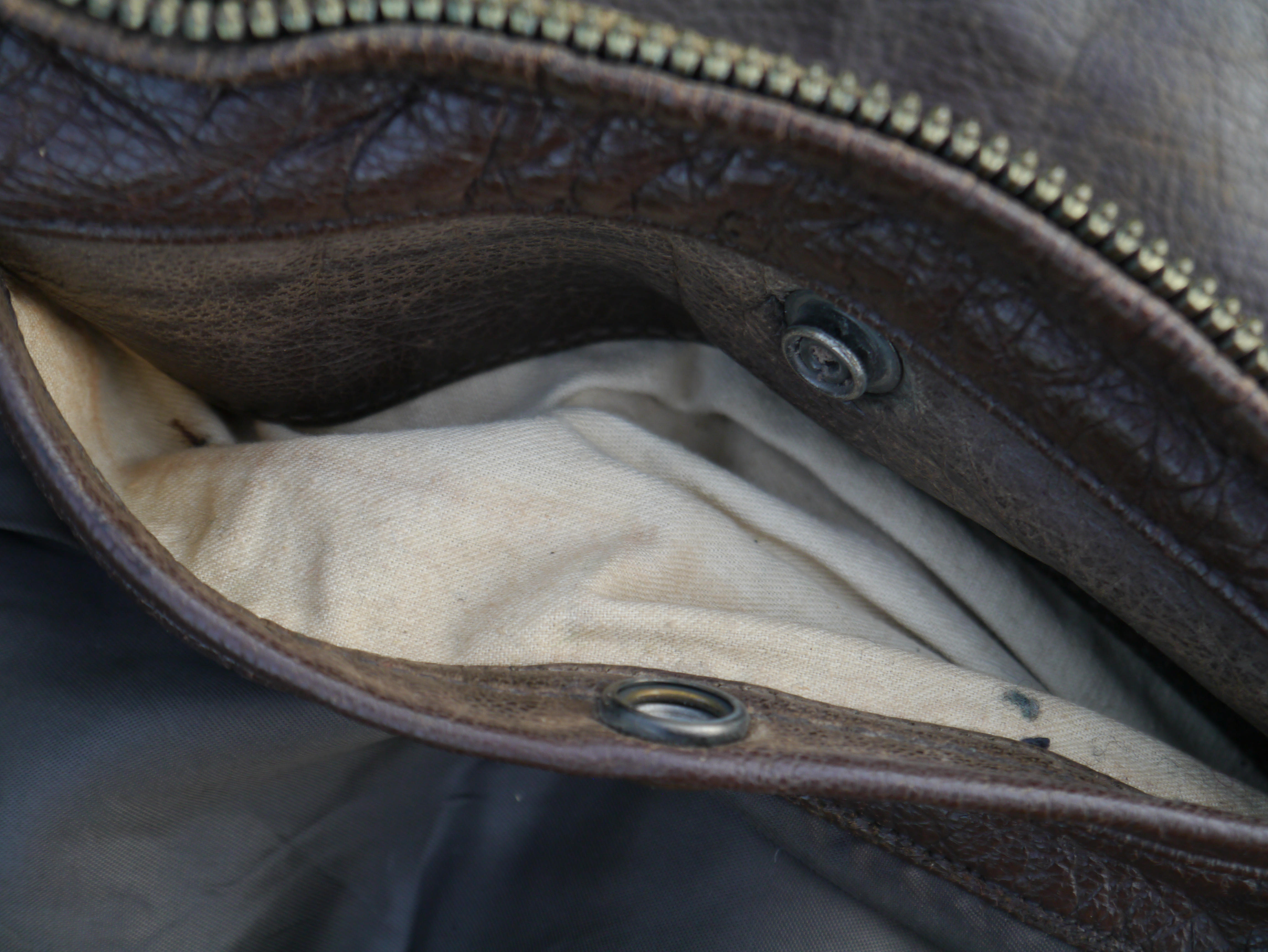 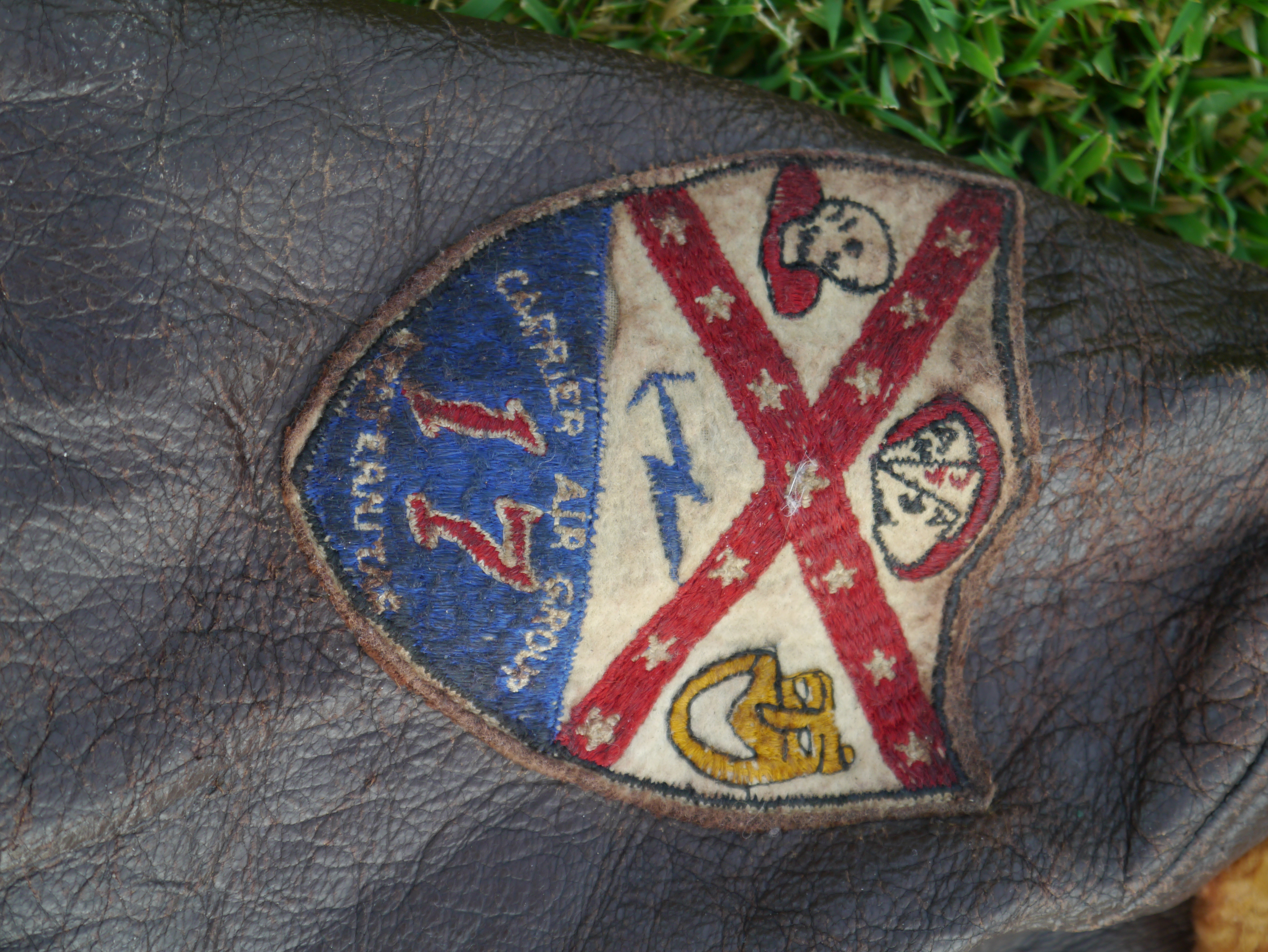 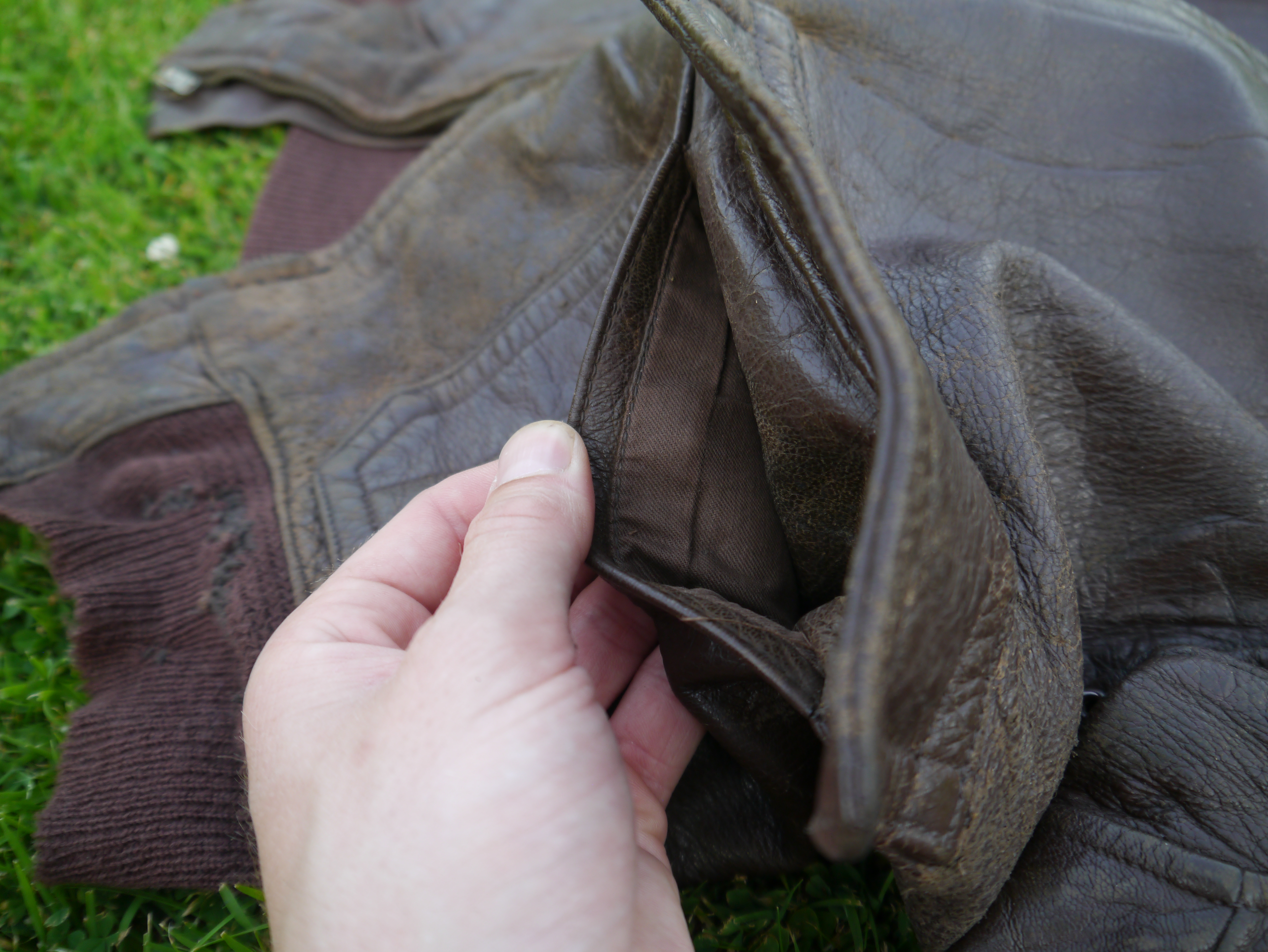 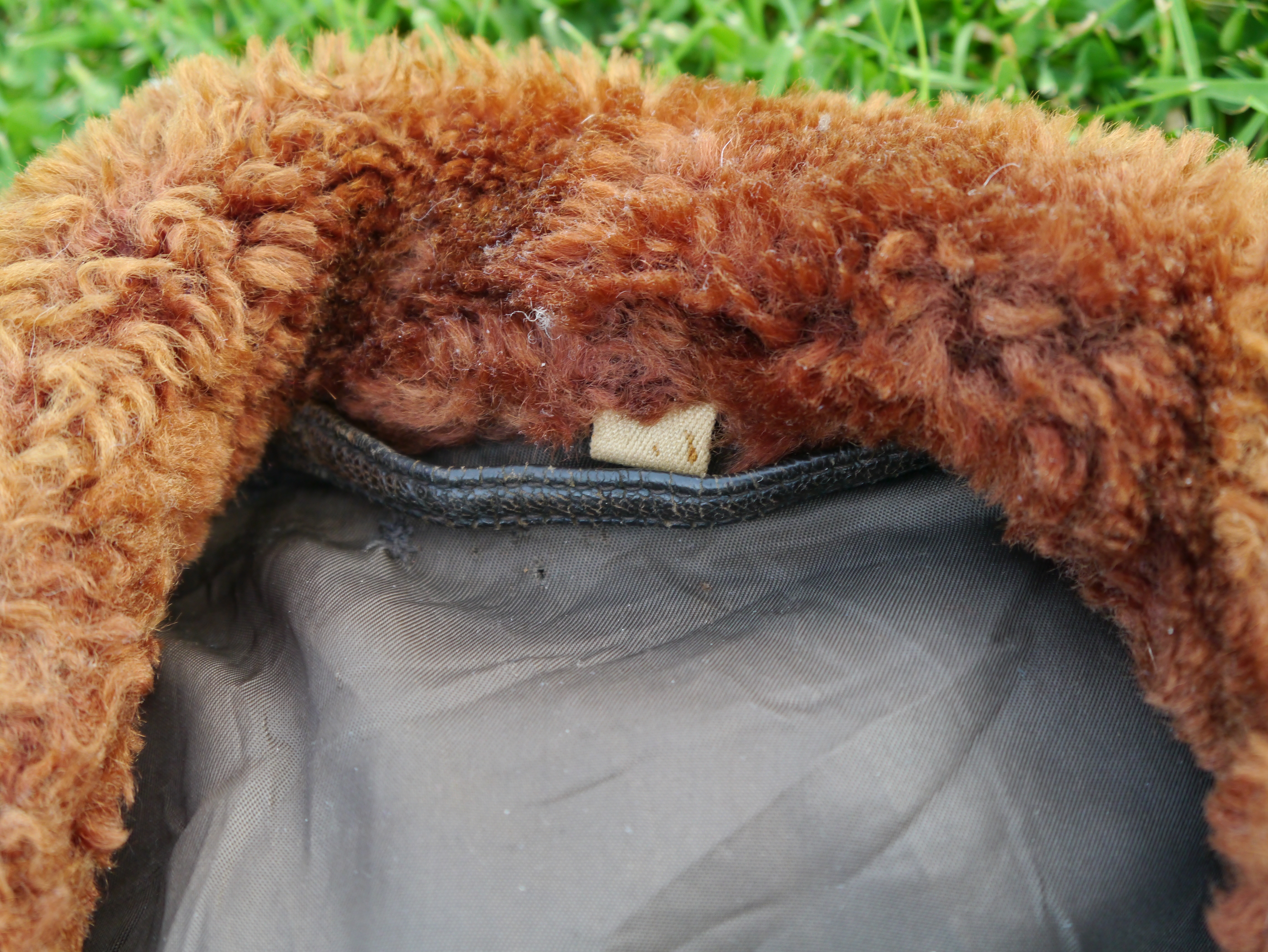 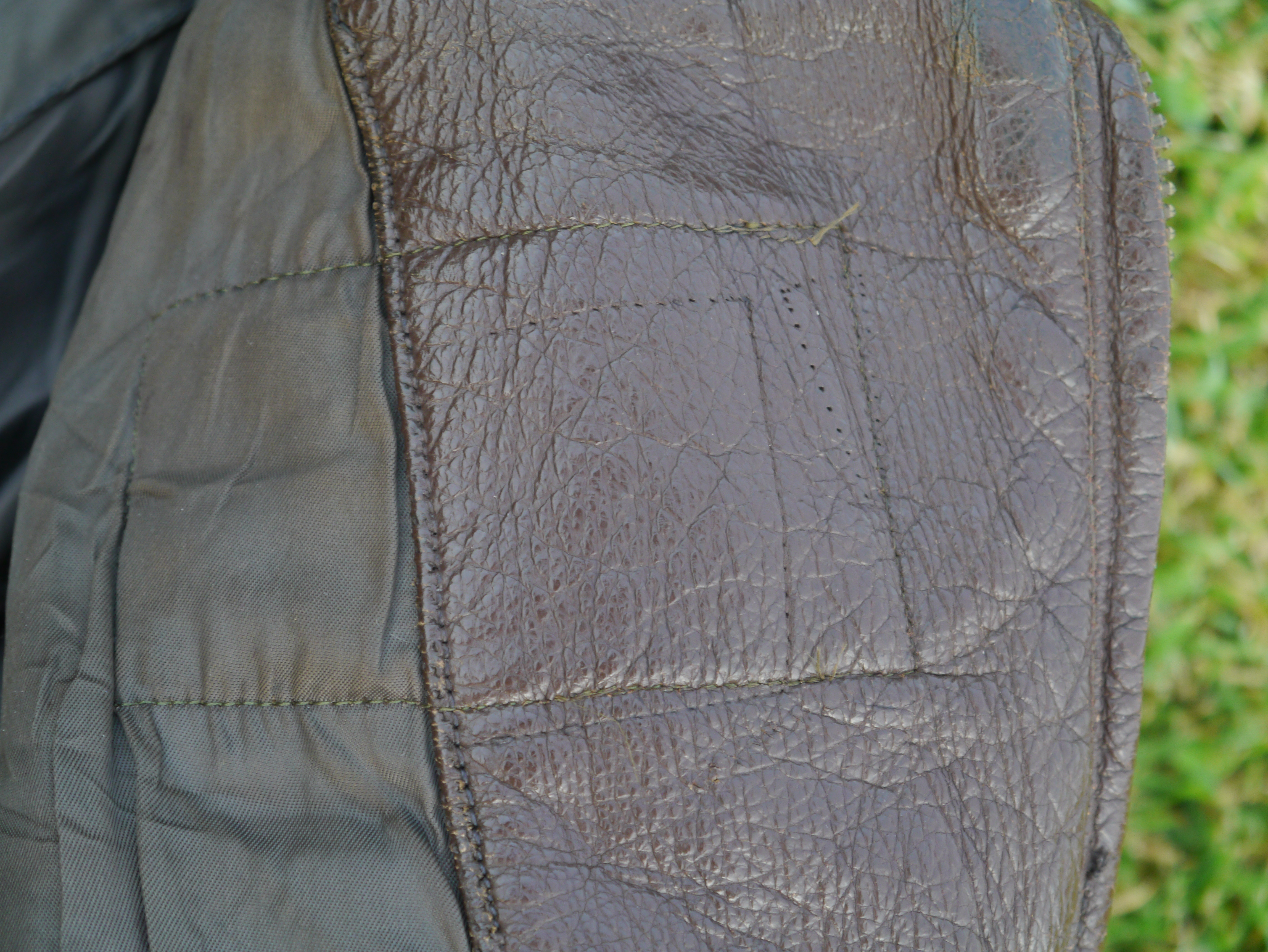 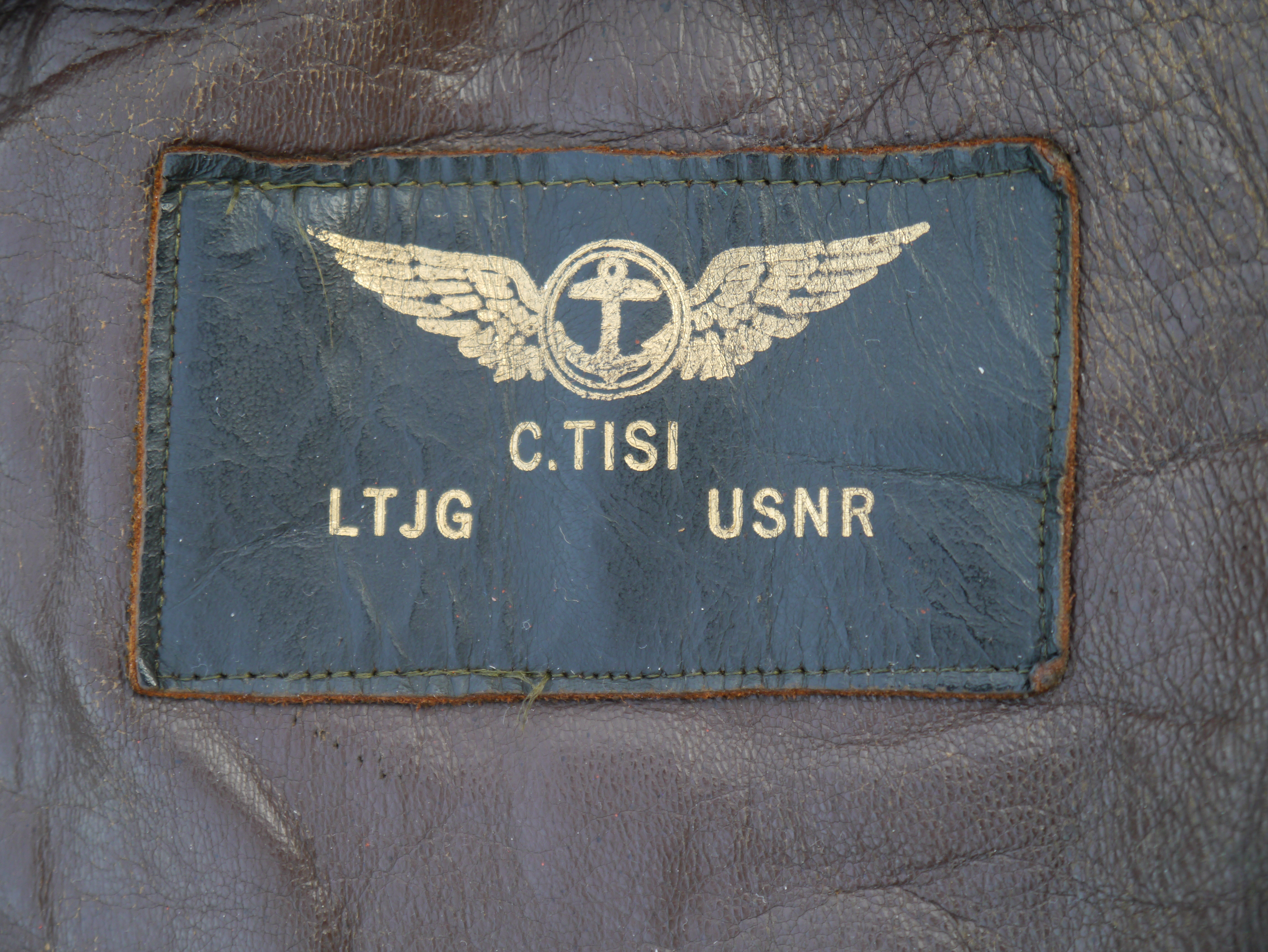 There are far better people who could comment on this one, but from the shape of the collar and the pocket flaps, I’m inclined to say it’s a Monarch 7823 G-1. They kept a lot of the features of their previous Navy contracts long after other makers had switched to shapeless pocket flaps and collars.

Maybe not a Monarch. But judging from the pocket configuration I'm thinking a G&F or maybe even a a 55J14 L.W. Foster. A few more close ups and especially one of that jacket's pocket would help.

Any clues under the collar or the wind flap?

Here we go, does this help? No clues undr the collar I'm afraid 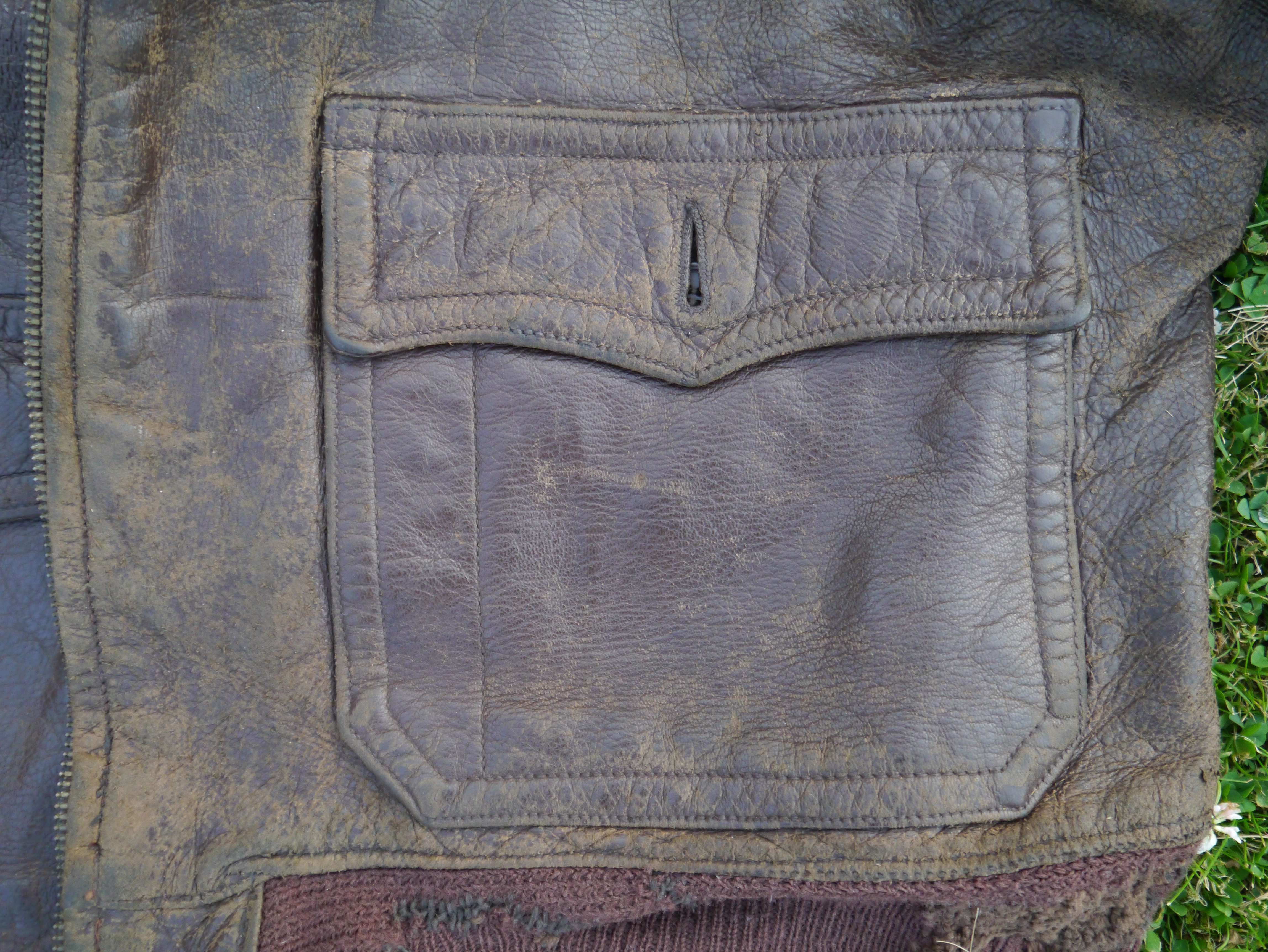 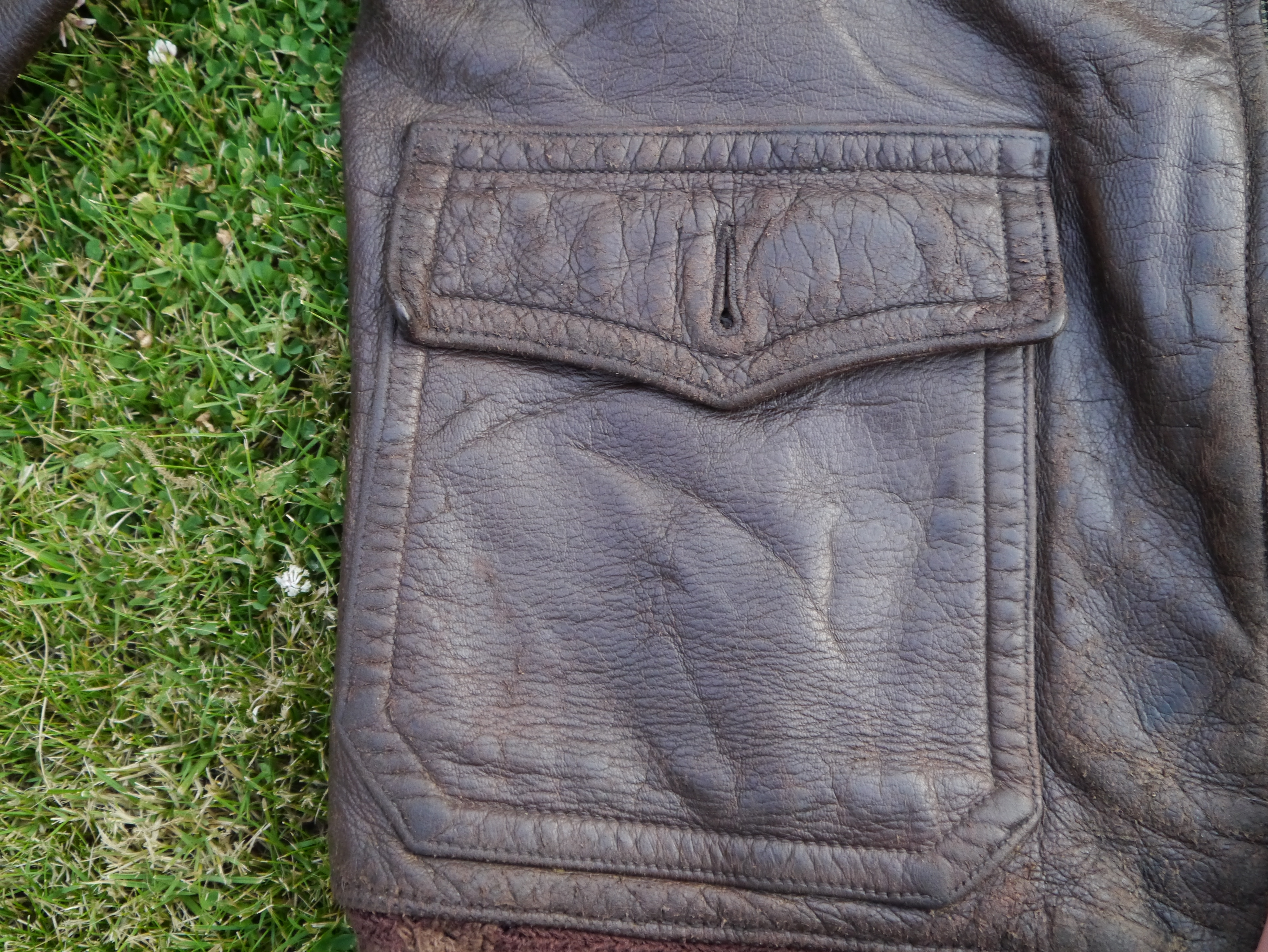 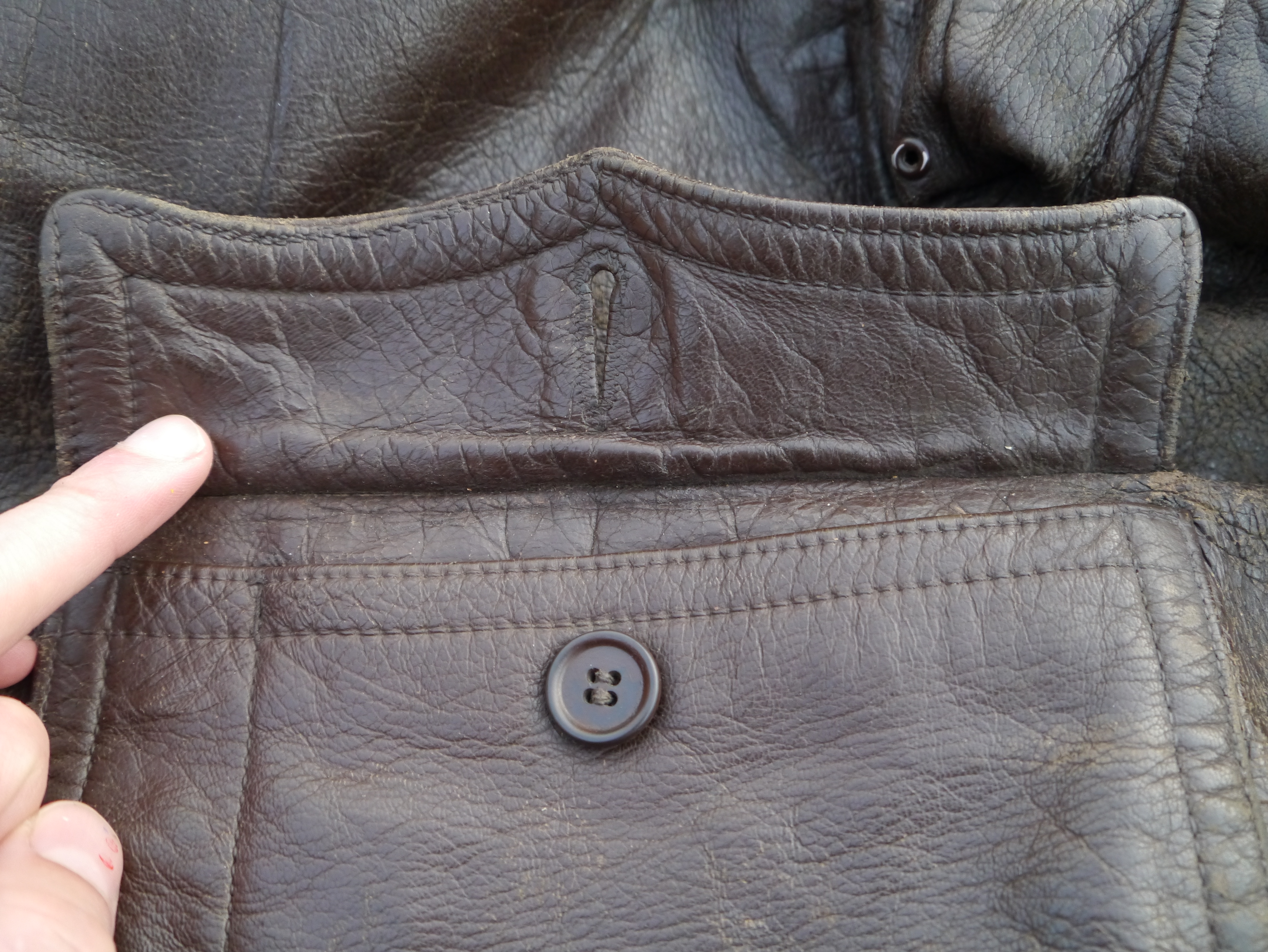 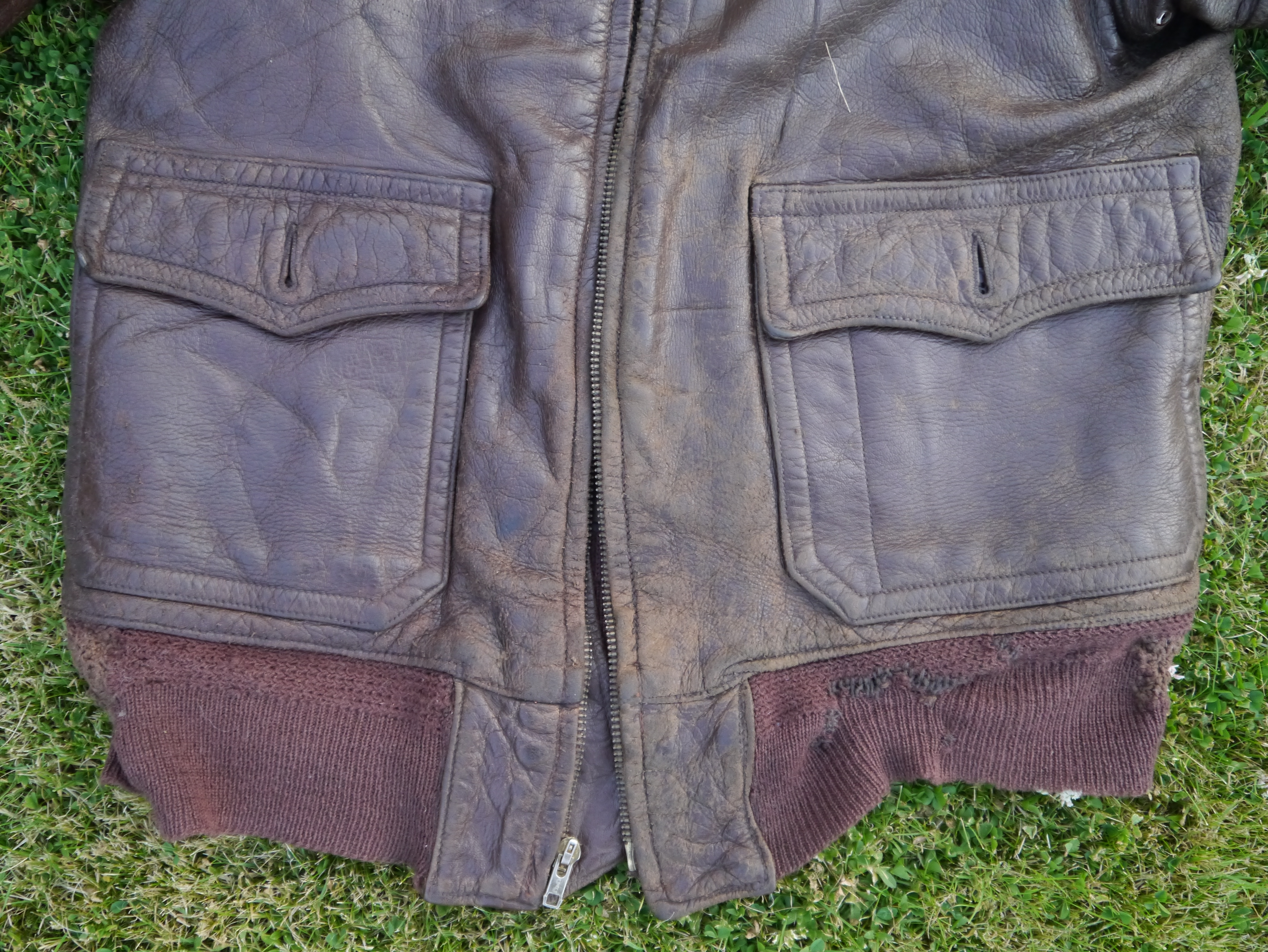 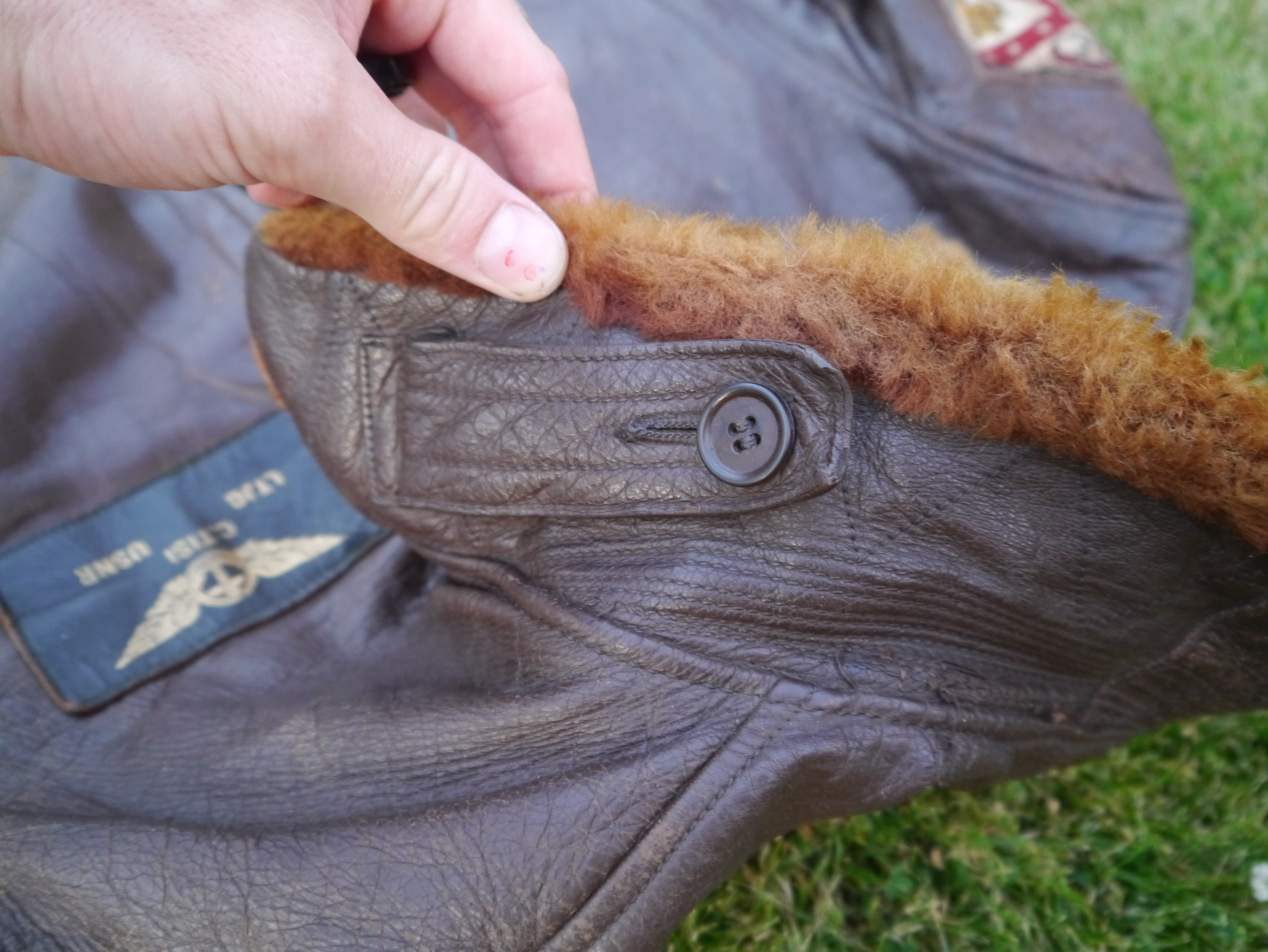 Just looked at my G&B M422A (duh) and I concur. The pockets match exactly.

If it's at all helpful in pinning down any dates, the Naval Air Observer wings on the jacket are post WWII and pre 1953. I you look at current Naval Air Observer wings, you will notice a series of "dots where the wings attach to the shield. These were added in 1953. If you look at WWII AO wings, you will see that the circle surrounding the anchor is plainer. The slightly more ornate one was a post WWII design.

You guys are fantastic, thanks so much! My initial thought was post war used m442a which is the reason I gambled and bought it. It's a bit rough but wearable and now I now it's ww2 I'm very happy indeed

I’m impressed by the combined knowledge of all those details in our group.

In agreement M422a, you lucky guy! For same reason ie the WWII age, Ive always hankered after such but in larger sizes they seem pretty scarce unless you pay big bucks hence I’ve 50’s G1’s that still bear similar scalloped pocket flaps and course the must have mouton collar!! Good find, enjoy and with some tlc can be refurbed nicely. Out of curiosity what size is it?

Cheers, I am very pleased with it, my personal brief was a ww2 jacket with an original patch and as I'm interested in Korean war use this fits the bill nicely. Seeing as it has multiple stitch holes behind the name tag I assume it was used in ww2 too.
ww2 just has that lure for a vintage jacket doesn't it, but as you say hard to find in a larger size. I would guess this is a 30 or 40, it fits me, perhaps a little short on the arms for my liking but still within ww2 perameters.

Please don't take my post as saying that your jacket isn't WWII, merely that the last name patch was of an AO who served between WWII and the end of the Korean War. Remember, there were several patches before the last one. Your jacket may have been a two war veteran.

P-47
If you go to my post in vintage about my WWII G&F M-422A, you'll see that other than condition, they are the same.

tda003 said:
Please don't take my post as saying that your jacket isn't WWII, merely that the last name patch was of an AO who served between WWII and the end of the Korean War. Remember, there were several patches before the last one. Your jacket may have been a two war veteran.
Click to expand...