The Japanese have raise the bar when it comes to keyhole button hole work. See some examples here https://global.rakuten.com/en/store/speedway-shop/item/1621029/ and here http://freewheelers.co.jp/blog/archives/19083. I'm keen to follow their example.

Great work Dave. Helps to understand the level of effort in labour and design that goes into making a jacket. Not to mention the continual maintenance that also goes into the machines

Just acquired an interesting picture taken aboard the USS Langley (CVL-27) as related to the Ens. John Z. Colt's Monarch jacket & that I would like to share with the forum. The picture comes directly from the son of another naval aviator. Like Colt, a participant in the Battle Of Okinawa aboard the USS Langley. In this case, a member of VF-23 & sister squadron of VT-23 who John Colt flew with. According to the son that following image which included his father was made in either March or early April of 1945. Note that the VF-23 ready room chalk board indicates the ordnance to be carried that day for both (VF-23 & VT-23) Air Group 23.

In doing some further research I identified the commander (CAG) of Air Group 23. Moreover, I have also located a great picture of the CAG of Air Group 23 James Southerland. That picture happened to have been taken on the deck of the USS Langley just prior to leading a strike on Okinawa. 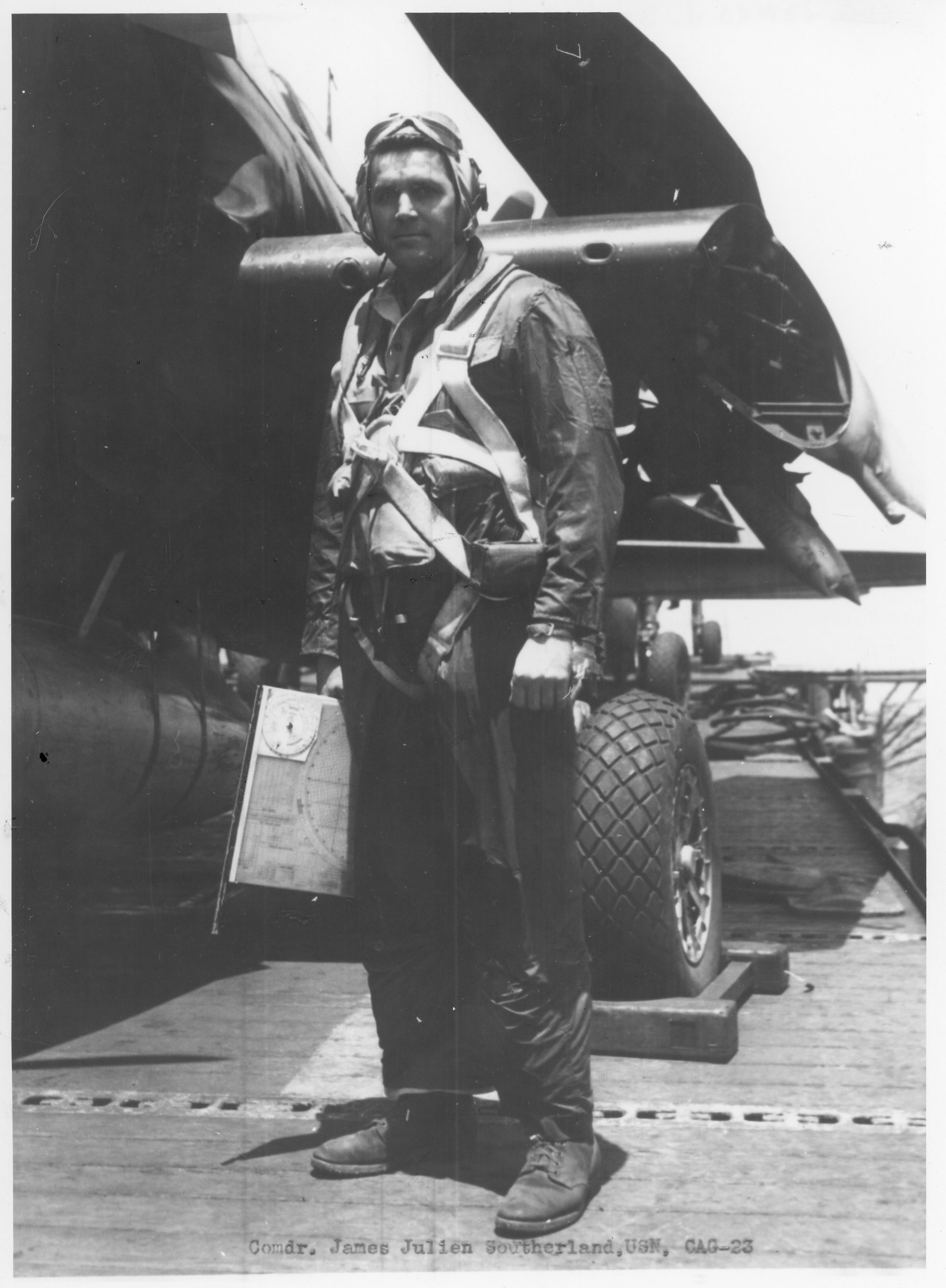 That image of CAG Southerland seen directly above must have been taken late in the campaign. He is not seen wearing his leather jacket!

CAG James J. Southerland had an interesting but short career. Credited with having made both the first shoot & shot down during the Battle Of Guadalcanal. A synopsis of his noteworthy exploits can be seen here https://en.wikipedia.org/wiki/Pug_Southerland .

What I found to have been the most fascinating story about Southerland was his encounter with Suburo Sakai. Almost lost because of his .45 having gotten tangled up and preventing a quick exit from his shot up air craft. Even more interesting was that his story of nearly not making it out of his air craft due to his pistol was confirmed in 1998 and can be found here https://www.pacificwrecks.com/aircraft/f4f/5192.html .

Even more ironic was what happened to Sakai upon immediately turning his attention to the same bomber air craft Southerland had been escorting. Likewise & as a direct result of that encounter Sakai became severely wounded and nearly shot down himself. That complete story can be found in Sakai's book SAMURAI!

Great information Dave. When I get a chance I will post pictures of my Colt grouping.

Great info Dave, thanks for sharing

After reading through the results of mulceber's research on his Monarch A-2 as seen here https://www.vintageleatherjackets.o...know-a-nother-flyer-through-his-jacket.26817/ his efforts inspired me to add to this thread.

Like mulceber, I have spent untold hours researching Colt and the original owner of my AN-J-3A Monarch jacket. In my case by shear luck and determination I happened upon one of Colt's flight crew member's son. He was generous enough to have supplied me with a copy of his late father's (gunner/radioman Fix) USN flight logs and (post war written) diary which outlined his USN War time experiences.

Below is a copy of Fix's flight logs dated April of 1945. Please notice that there are two entries for April 23. In addition, Colt is his named pilot for all 17 of Fix's combat missions during the Battle of Okinawa. Next is a seven page entry for April 23, 1945 from Fix's diary regarding the events of Colt, Hawkins (turret gunner) & Fix's double landing. One on Okinawa and the other back aboard the USS Langley. Just one of the many combat experiences that he dictated with regards to his War time efforts during The Battle of Okinawa. Well done , it’s always great to attribute a jacket to someone or something

This is why I enjoy collecting original jackets . Each one has a story to tell . You just have to dig around and take the time to track it down.
Jan and Dave have done some brilliant detective work in this area. Well done to both of you .

Fantastic Dave, thanks for that. Brings it all to life...

That’s how to make a day of it indeed. And “No training in night landing operations” !

Lord Flashheart said:
That’s how to make a day of it indeed. And “No training in night landing operations” !
Click to expand...

Yes, by in large the later part of the War was fought with non career type USNR individuals. Exactly like those guys featured here with Colt, Fix and Hawkins. Their training was limited by comparison to who fought earlier on. On the other hand, their leaders were seasoned professionals and not unlike James "Pug" Southerland whom I pointed out earlier in the thread.

Dave, thanks for posting this info, the is priceless. I realized i still haven't posted pictures of the Colt grouping i have. I will try to do that now

There is is, the helmet, flight goggles and the Japanese shell that he picked up on Okinawa when he landed there on the eventful day of April 23rd. What is interesting is that shell is still encrusted with crushed coral from the landing strip. The helmet that is now in your care would have more than likely been that same one Colt wore when he crash landed and cart wheeled his Avenger off of the deck of the USS Langley. Most notably, he is seen wearing a flight helmet in the pic seen below. That is Colt and his flight gear seen suspended by a line having just bailed out of his cockpit and prior to being hoisted back aboard. I posted another crash related pic previously of Colt being handed a line by a ship mate while situated up side down and buckled up in the Avenger cockpit.

that is an amazing picture. Yes that is probably the helmet i have. It is hard to imagine what it went through. i love it when there is so much history documented and attached to flight gear

Hi All,
Recently sourced some stunning goat hides. Perfect for my Mid War Monarch AN-J-3A or with some modifications do a pre War Monarch M-422 using those same hides.

These particular hides are unusually large. As seen below they dwarf my original size 46 AN-J-3A Monarch As seen directly from the tannery, these hides have plenty of grain. Once worn in these hides will gain even more character. Most notably, I have sourced two original pre War Monarch M-422 jackets to use for patterning purposes. Albeit & contrary to popular opinion, although close in design to the War era AN model Monarch USN flight jackets, do not share the exact same patterns.

Hi, The first jacket that I have slated to do using these same hides is a Monarch M-422. Only having recently had those labels made. My AN-J-3A model Monarch will have to wait.