My guess is that these B-G INC 55J14 G-1s are among the most rare USN jackets ever made.
Click to expand...

I've only had two of these in 20+ years of collecting flight jackets, so I would agree with you based on that and what other information I've seen over the years.

The most favorite of my three B-G INC 55J14 jackets is IDed to a Charles Porter & career naval aviator. A SBD Dauntless dive bomber pilot who flew with VB-5 off of the USS Yorktown (CV-10) during the island hoping campaigns. This B-G INC must have been his second issue and having either worn his WW-2 jacket out or grown out of it. Unfortunately, Porter did not transfer his WW-2 VB-5 squadron patch to this jacket.

When I first received the jacket and immediately upon opening the package I detected the faint odor of tobacco. Later I did some research on him. You can go here https://www.navysite.de/cruisebooks/cv15-54/089.htm and see him wearing this same B-G- INC. jacket. Note that he smoked cigars!

Most unfortunately, CDR Porter was killed during an operational accident in 1960. The accident happened not long after taking command of VAH-2. The main drag that leads into NAS Widbey Island is Charles Porter Avenue & his name sake. I also have copies of Porters WW-2 flight logs and picked him up on several WW-2 Post Action Reports.

If I recall correctly, according to Roughwear the jacket is a 1950 model. In many ways the jacket's design is reminiscent of the M-422A. In addition it retains the same brass Talon zip used on late war AN model USN jackets. The most notable difference between this model jacket and the M-422A is it's greater sleeve taper as it progresses towards the cuff. Otherwise they look much alike. 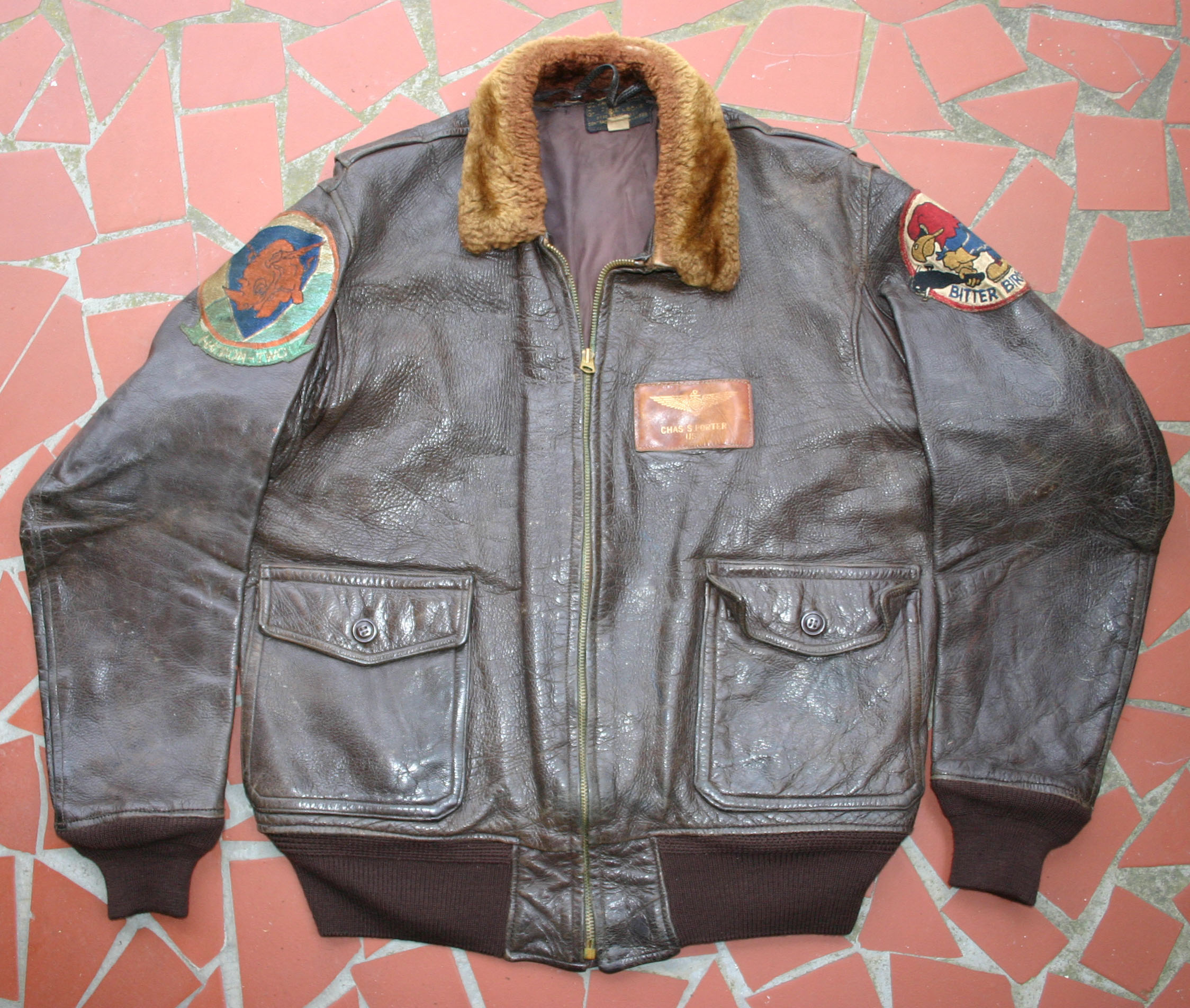 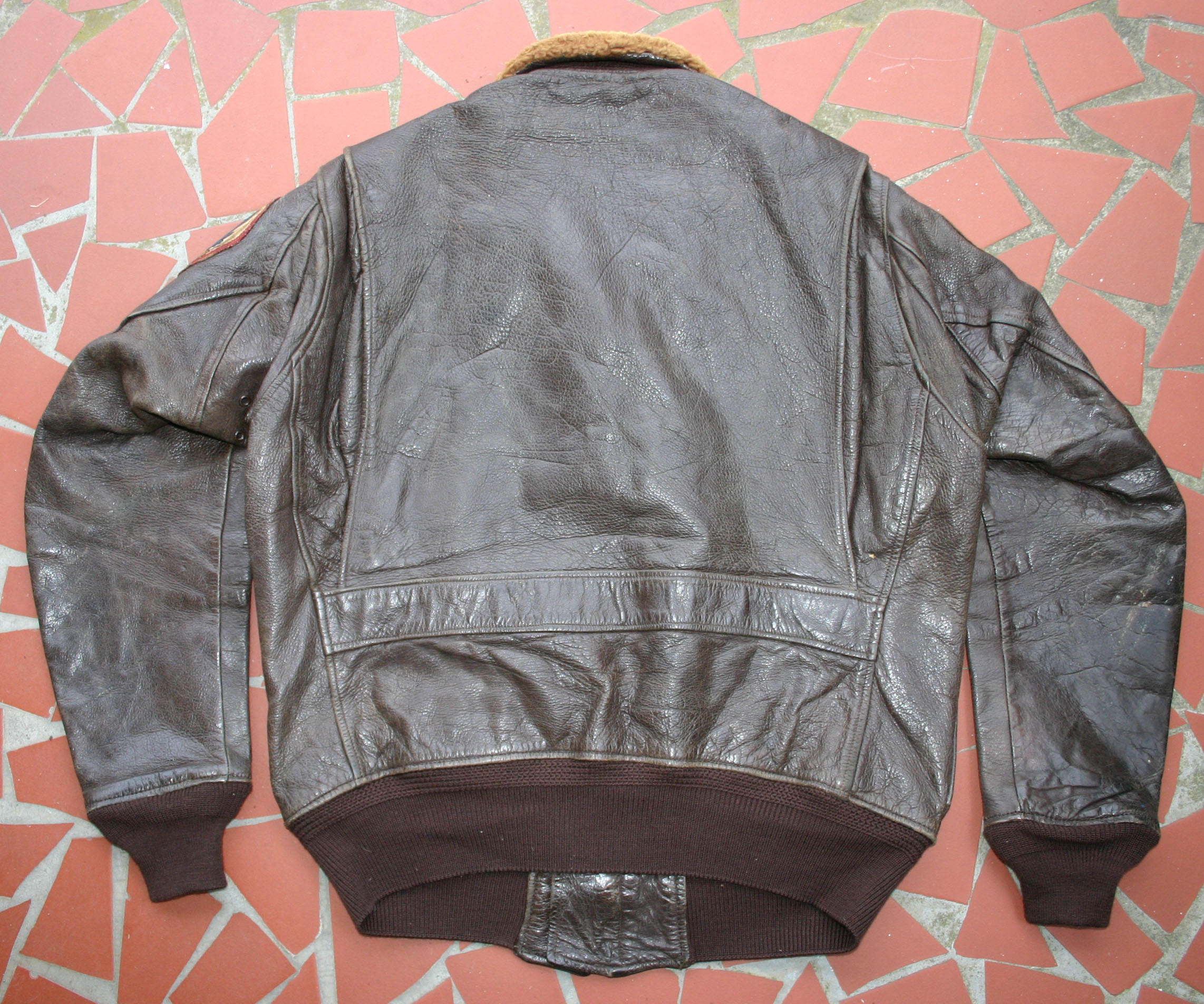 The jacket is marked a size 44 but measures out to be a size 42. Obviously it received no more than 10 years of service life. With the exception of having added the two squadron patches and the winged ID tag the jacket remains all original. In addition & most notably, it still retains it's original knits which are still close to perfect.

So cool to have a rare jacket with documented history! Yes, according to Full Gear, this jacket wasprodued in 1950. Is it cut longer in the torso, like a M-422a as compared to other 55J14’s? What color is the USN stencil under the collar?
Thanks for posting the photos and giving a little history of CDR Porter.

The jacket has a unique USN stencil. See here . 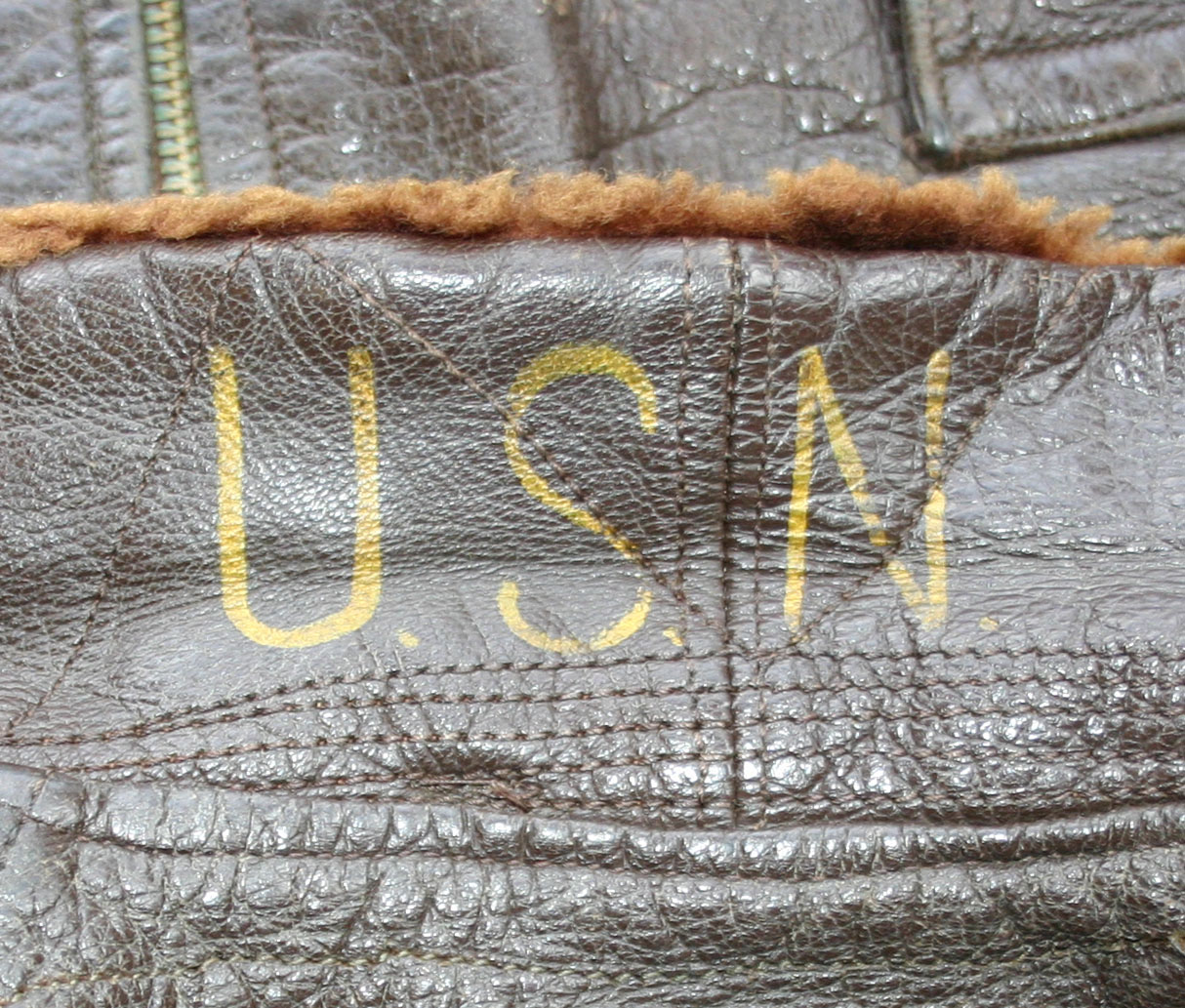 The body of the jacket is more like the length found in the modern G-1. In addition, it is my understanding that the longer length jacket bodies pretty much ended with the M-422A. Thereafter, the mid War AN model jackets lengths prety much initiated what we see today with USN type jacket body lengths. My size 44 B-G INC. has a 25 1/2" length at the back. Although I have not handled a size 46/48 in a B-G INC, I have had the opportunity with many other makes for both AN and 55J14 jackets. Judging from those other later War model jackets I believe that the longer body length seen on the M-422A would thereafter have only been found in those extra large 46 & 48 size jackets.

The 55J14 is truly a transitional jacket. The B-G INC utilized a mix of nylon and cotton thread. Many makes like the L.W. Foster maintained designs that were hold outs from late War AN model jackets. But again, without the longer length seen with the earlier model M-422A style jackets.

What is surprising & maybe wrong but I am almost certain that in some cases the B-G INC used vegetable tanned hides on some of their jackets. Thus was the B-G INC. the last jacket maker to use that type of hide on a USN jacket? Certainly it was not used on all of their hides were but as evidenced by Stony's jacket with it's great patina it sure looks like it to me.

My pristine B-G INC jacket may have that same fantastic hide as seen on Stony's B-G INC jacket http://www.vintageleatherjackets.org/threads/b-g-inc-from-uss-randolph.21032/ . However & since for the most part my jacket remains unworn it has not had the wear to enable it to develop any patina. What I do see on my jacket are those same undertones as seen on Stony's jacket peaking through from factory tooling marks. 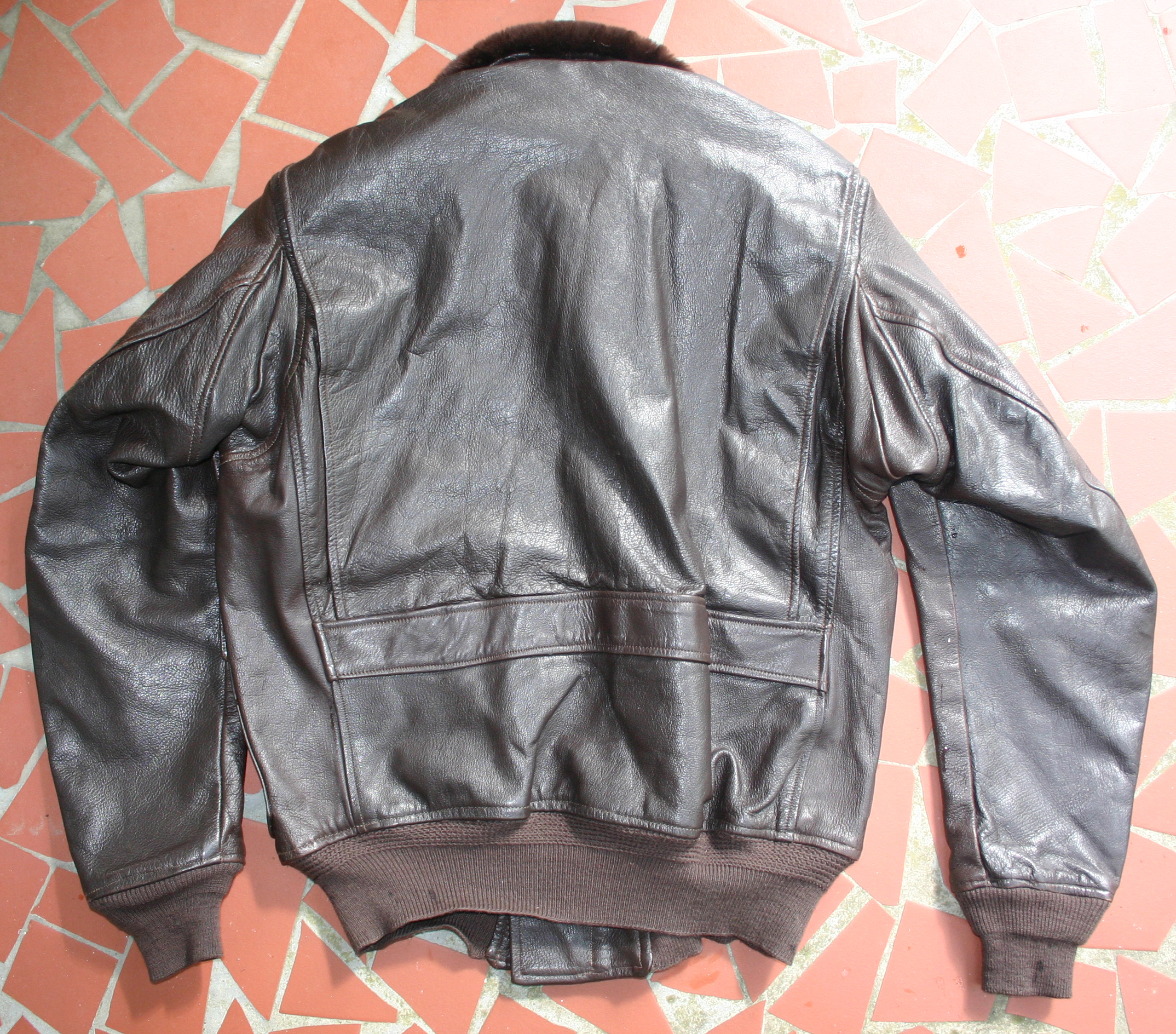 Not nearly as interesting as the Porter jacket! But still a cool looking jacket.

And despite the thread title, I am assuming there really is not much interest in the original M-422 without the "A"...

I don't think that's a stencil at all. I reckon that's hand painted.

zoomer said:
And despite the thread title, I am assuming there really is not much interest in the original M-422 without the "A"...
Click to expand...

Because of price or other reasons? Some members are into the collectability of jackets or just want to wear them. Jackets like the M-422, B-G Inc., Cooper and Monarch A-2s, fall into the collectable category and are normally pricey.

Stony said:
Because of price or other reasons? Some members are into the collectability of jackets or just want to wear them. Jackets like the M-422, B-G Inc., Cooper and Monarch A-2s, fall into the collectable category and are normally pricey.
Click to expand...

I'm weird. I actually like wearing preWW2 contracts and couldn't give a slap about having a complete collection or collectible value.
R

bebusy said:
Luckily, I have found TopGunstore. They really a nice collection of Bomber Jackets. Everyone must give them a try!
Click to expand...

This group is for vintage leather jackets rather than modern mall style jackets. To join and provide a sales post straight away is against forum rules.

bebusy said:
Why my comments were deleted. Is there anything wrong with the group?
Click to expand...

Hahaha
This cracks me up!!
Obliviously there has to be something wrong with us , it can’t be him.

Dang, a spambot that can answer!!

zoomer said:
And despite the thread title, I am assuming there really is not much interest in the original M-422 without the "A"...
Click to expand...

Actually, that would be my first choice, but as far as I know only John and BK offer a decent M422 repro...

bebusy
You seem to have something to say, so why not join our forum by posting a bit about yourself in the New Members Bio Section and tell us about yourself.
This thread addresses a specific type of jacket and really isn’t the section to joust about in a game of verbal ping pong.

Brettafett said:
Actually, that would be my first choice, but as far as I know only John and BK offer a decent M422 repro...
Click to expand...

Me too Brett. Actually Maverickson, same chap that did my latest AN-J-3 will do a rather spectacular Monarch m422

Seriously, what are we waiting to ban this guy? No introduction, first post is for a commercial website for mall jackets, and there's clearly no intention of participation on the forum.

What are you doing for 3 days? Posting links for mall jackets that have nothing to do on the VLJ ;-)