If You Like WW2 Squadron Patches - Better Be Sitting Down

The U.S Militaria forum talked about the patch king aaf patches being painted on a leather like fiber board.
A


CBI said:
..........the collection was given to him by an uncle who says her purchased tehm in the 1950's by someone known as "the patch king" or "the patch maker". The artist's business card was displayed on a wall with a load of patches but he can't remember the name. So, we have forum guys pretty sure these were made in the 1980's and the owner saying 1950's.

Not pretty sure, but I know for sure that these painted squadron patches are from the late 1980's to early 1990's. Sorry, but "I was there" on this one. :shock:

As far as Patch King and the similar company from the same WW II era, The Hobby Guild of America, most of what they sold were fully embroidered US made patches purchased directly from the manufactures that were production overruns, slight errors, or from units that disbanded. They also sold patches they bought as government surplus.

On top of that, Patch King had patches made. Some were made buy the same manufactures using the same machines that were used for the patches made under government contract. A good example of this are a couple of units from the CBI theatre....Merrill's Marauders and Ledo Road...both units only wore theatre made patches, but you could buy fully embroidered US made versions in their catalogs. These patches are often sold today as being "real" and "original"....which they sort of are, but sort of aren't.

Besides selling patches they had made by government contractors, these companies sold patches that were not close to "regulation". For example, they had some very bad looking German, Japanese and foreign insignia, a line of tiny WW I patches, squadron patches on cardboard and felt, and a few miscellaneous fantasy pieces. There was a lot of collector demand at the time, and they did their best to fill it.

One thing that they did not sell were hand painted leather squadron patches. Actually, considering the large variety of patches they offered, they really did not have that many squadron patches.....and most of what they did have were the cardboard and felt ones cheaply made for collectors. They did offer a few nice embroidered patches and screen printed patches that were....or might have been...actually worn by the units.

Below are two photos from a July 1945 Life Magazine article on patch collecting. Every patch on these boards....plus the other five or ten boards not shown, are either from Patch King or The Hobby Guild of America. About twenty years ago, a friend of mine bought this collection directly from the "kid" you see pictured. Along with the collection, came the catalogs that showed where the kid ticked off the patches as he ordered them. The most disappointing thing about this collection, was every bit of it came from these catalogs!

In the first picture, the board above his head is the one with the squadron patches. The second shot shows the same patches, but not mounted on the board. I own most of the squadron patches on that board and in the pile in front of him. One patch of note, is the one that is in the lower left hand corner of the first picture. It's the fishing plug from the 6th Antisubmarine. It is oval and machine embroidered on twill....not hand painted like the one in the museum's grouping.

By the way, he got the "enemy" and Allied emblems he was after....all again directly from the catalogs.

Here is a link to a clearer shot of the first picture:

I noticed I was off a month, and it was from August 1945 Life. I think the second picture is from July 1945, but maybe not from Life...since I have some of these patches, I have been bookmarking these pictures when I come across them. This kid was in a number of different magazines at the time, and given his patches all came from catalogs, I sort of wonder if this was really a publicity stunt to drum up more patch business.

Thanks for the whole story on that, all sounds about right to me from the bits and pieces I've heard over the years.
R

So your friend bought that 'collection' and broke it up, or you own it all now?

Yes, he bought the entire collection and broke it up. I got most of the squadron patches, both on the one board and in the pile. On the squadron patch board, there were also some airborne patches...some very nice ones....a few you can see to the right of his head. I did not get any of those. He kept or traded away a couple of the squadron patches, but then we did a deal for the rest....about half were made for collectors and half probably not. I still think I have most of what I got, though I am not sure where I stashed the made for collector ones.
A

wartime or no, sure worth the effort to scan or single photo

Can't get an answer from the original owner so I/we on this end dropped the matter, at least for a while. Apologies 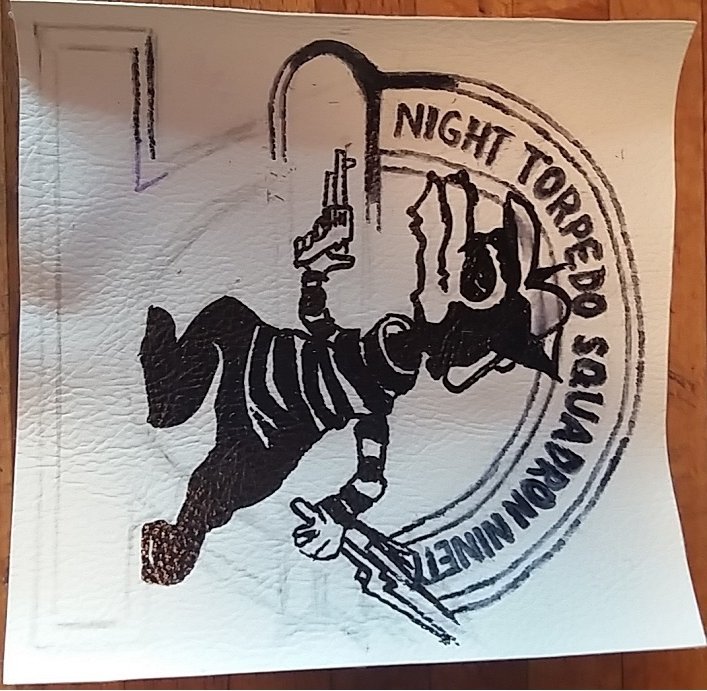 The minute I saw this patch combo in a photo posted by Thomas, I like this patch.
Use some scrap vinyl & a side-pen, I draw this 5.5" square patch[WIP]. Just a bit of fun & time-killing, not seriously made. Should be a little bit refined should I got a small pen View attachment 4736 tip say 0.5 or 0.3mm.
Do you like it ?

Always liked to draw
Unfortunally time is usually not enough for this.
In my childhood I loved to paint of scale model kits. Years after they were replaced by real planes (although I still make one model once a year )
This is a patch I painted on leather for my AVI A2 Bronco , previously explored tons of photos theatre made WW2 patches of 5AF.

The jacket and the patch look terrific.
Very nicely done . Show us a little more of your AVI Bronco please.

B-Man2 said:
The jacket and the patch look terrific.
Very nicely done . Show us a little more of your AVI Bronco please.
Click to expand...

Thank you. Advise please where it is best done? In a thread where everyone is arguing about AVI?

Send me a couple of photos of it in the off line conversation section so we don’t get the AVI Police aggravated .

Dmitry, just start a new thread either in the repros or reviews section and post some pics of your Bronco. You can post pics of any repro flight jacket by any maker on VLJ and there's plenty of guys who would love to see some more photos.

Smithy said:
Dmitry, just start a new thread either in the repros or reviews section and post some pics of your Bronco. You can post pics of any repro flight jacket by any maker on VLJ and there's plenty of guys who would love to see some more photos.
Click to expand...

ОК Smithy, I'll try a little later, if you think it will be interesting, right now I am called to the galleys

Flightengineer said:
ОК Smithy, I'll try a little later, if you think it will be interesting, right now I am called to the galleys
Click to expand...

When you get a chance post some pics. Certainly don't be intimidated from posting just because of the odd silly crackpot with an agenda in that other thread, those types are the minority rather than the majority here.

Reminds me, I have to pull my finger out and post some pics of mine too!

Well, I promise when I get home I'll post some my Bronco photos.
As for the patches, I sometimes draw them for myself and sometimes in cooperation with these guys https://www.instagram.com/flightpatches/
(most of the jackets used for photos are my jackets)
When I'll stop fly I'll go to paint the jackets and draw patches , if cant no find other job
You must log in or register to reply here.
Share:
Facebook Twitter Reddit Pinterest Tumblr WhatsApp Email Share Link