How modern A-2s where reinstated by the USAF

How modern A-2s where reinstated by the USAF.

Extract from the Airforce magazine Sept 1 1993

Although the A-2 was not issued after the Korean War, it remained a symbol of USAAF’s war years in the minds of those who served. It was revived in the 1980s when Project Warrior was established to remind blue-suiters about the fighting heritage of the Air Force and as a retention incentive.
One Project Warrior initiative came from Col. James S. “Stu” Mosbey, then assigned to 9th Air Force headquarters at Shaw AFB, S. C. A friend showed him an A-2 jacket his father had worn during World War II as a P-51 Mustang pilot. On its back was a painting of a Mustang named Tokyo Express. To Mosbey, the jacket expressed a sense of union, common interests and responsibilities, and the experiences of thousands of World War II pilots and crew members.
Colonel Mosbey wondered, “Why did the Air Force ever give up the A-2? It’s a beautiful jacket that we all ought to be able to wear.”
Mosbey approached a number of his fighter pilot friends. If permission were granted, he asked, would they like to buy and wear the A-2? The answer was a thundering “Yes!” Colonel Mosbey and others visited the Air Force Museum, chipped in $20 each, and bought an A-2 in the gift shop. As a group, they presented the jacket to Lt. Gen. William L. Kirk, commander of 9th Air Force, and made their pitch to be allowed to purchase the jacket with their own money and wear it as a symbol of Air Force heritage and esprit de corps among fighter pilots.
General Kirk agreed to the idea and took it “upstairs” to Gen. Robert D. Russ, commander of Tactical Air Command. General Russ authorized Mosbey and a team of pilots to visit other TAC bases with 600 questionnaires for pilots, hoping to gauge their enthusiasm. Ninety-five percent said they would wear the A-2. General Russ approved the jacket revival but thought it should be an item of government issue.

The Obvious Choice
Col. Schumbert C. “Hoss” Jones, a former Thunderbird pilot assigned to TAC headquarters, was appointed project officer. He studied the regulations and researched the procurement sources. He found there were about a dozen kinds of flight jackets available, including Navy types, but “it always came back to the famous A-2” as the desired choice.
“ Although it was intended originally only for TAC pilots,” according to Colonel Jones, “the jacket idea quickly blossomed into an Air Force–wide project as other commands became involved.” Gen. John T. Chain, Jr., commander of Strategic Air Command, “was very much in favor of his pilots also wearing the A-2,” said Colonel Jones. “Other major commanders wanted their combat-ready pilots to be included.”
As a result, the revival of the A-2 jacket took on a special status as a visible symbol of the modern Air Force pilot. According to one internal paper, the rationale given as the idea climbed upward in command channels was that combat-ready aircrews were “not adequately recognized and that reinstatement of the distinctive aviators’ jacket would be a significant help.” The Air Force estimated that the initial expense to outfit the operational forces would be less than $5 million.
Briefings were prepared as the idea gained momentum. A new regulation in 1987 permitting the wearing of A-2 flight jackets would commemorate the fortieth anniversary of the Air Force. The jackets would acknowledge outwardly the “fly and fight” mission of the Air Force and recognize “first-line” active-duty, Guard, and Reserve men and women. Jackets would be issued on a one-time basis only to combat-ready flyers (officers and enlisted) assigned to front-line units.
The defense budget included a line item for the jackets, but some on Capitol Hill thought the idea frivolous and too expensive. Nevertheless, although a number of Air Force programs sustained deep cuts, the jackets stayed in the budget after hard lobbying by those in and out of uniform who believed in their value.
Maj. Mitch Driggers, a navigator in charge of the clothing division in the Pentagon, was assigned to get the jackets back into the Air Force flight clothing inventory. As quoted in Hell Bent for Leather by Derek Nelson and Dave Parsons, a book about the A-2 and Navy G-1 jackets, Major Driggers did not find the job easy.
“ The deeper I dug, I found out that there were no patterns,” he said. “In the old days, a series of drawings [was] done, and then they figured out the general dimensions.”

Faraway Sources
Major Driggers received from the Air Force Museum an A-2 jacket made in 1936. He found two manufacturers (Avirex and Willis & Geiger) that were still making them because of public demand. When the contract notice was issued, ten other manufacturers sent in bids. The contract was won by the Cooper Sportswear Manufacturing Co. of Newark, N. J., which opted to make the jackets out of goatskin instead of horsehide. The manufacturer had to obtain goatskin from Nigeria, Tasmania, and Pakistan because no source in the US was large enough.
The Air Force chose December 31, 1987, as the deadline for awarding a contract. Specifications were issued, and the procurement process began. The initial contract was for 53,000 seal-brown goatskin “traditional” USAAF A-2 jackets, to be delivered at a rate of 5,000 jackets per month. They would be worn with a leather name tag embossed with name, rank, wings, and “USAF” in silver on brown leather and would bear a major command patch. The first jackets were delivered in May 1988.
According to the current regulation, the jackets will be issued only to officers or enlisted personnel who are in mission-ready, emergency-mission-ready, mission capable, or mission-support billets assigned at or below wing level who met the criteria on or after September 18, 1987, the Air Force’s fortieth birthday. “Once a member is issued the jacket,” according to the regulation, “he or she may continue to wear it after being reassigned from the duties [that] originally qualified him or her for the issue.” It can be worn “with the flight suit, service uniform, or pullover sweater” but not with civilian clothes. After he or she retires, the wearer may keep the jacket.

Trust the Air Force to be all Air Forcey about a leather jacket.

The navy issues them in flight school, because, you know, that’s when they are flying.

The Air Force issues them to combat ready crews about 5 minutes before they transfer them to non-flying jobs in HR or recruit training squadrons. They also get issued to drone pilots who sit in a trailer in Ohio. A-2s and flight suits have become such a none flying thing that many crews eschew them in favor of the Army 2-piece suit.

Colonel James Stewart (Stu) Mosbey was born in 1942, in Owensboro, Kentucky. He moved with his family to Athens, Georgia in 1956 where he graduated from Athens High School in 1960 and the University of Georgia in 1964. He was awarded his private pilot’s license in 1964 and in 1965, he began pilot training with the Class 66-E at Laredo Air Force Base, Texas. Mosbey graduated pilot training with honors in 1966 and began training in the F-4 Phantom, eventually flying every model of the Phantom (Air Force, Navy, Marines, and German) manufactured in the United States. In 1969, he began what was the first of three combat tours in Southeast Asia. Mosbey flew 375 combat missions, with over 250 in the extremely hazardous Fast Fac role. In 1976, he was selected for the United States Air Force/United States Marine Corps fighter pilot exchange program. As operations officer for the VMFA-314, he led the Marines to their first ever participation in the world’s largest tactical training exercise, “Red Flag.” Mosbey completed aircraft carrier landing qualification and was later awarded the Honorary Marine Pilot Wings for his contributions to Marine Corps Readiness. In 1982, Mosbey took command of the 6200thTactical Fighter Training Squadron leading the largest multi-service, multi-national serial combat training exercises in the Pacific Theater. Upon promotion to Colonel, Mosbey was assigned as the Chief of Standardization and Evaluation at Ninth Air Force, where during this assignment, he spearheaded the effort to reinstate the A-2 leather flight jacket as standard issue to Air Force flyers. This jacket had been standard issue to combat crews from 1938 until being discontinued after WWII. Due to Colonel Mosbey’s efforts, the leather jacket is now standard issue for all mission-ready crews. In 1988, Colonel Mosbey was assigned to Moody Air Force Base, Georgia, where he became Commander, 347th Operations Group. During the Persian Gulf War, the Moody-based 69th Fighter Squadron flew 1,500 combat sorties without loss or damage, earning Colonel Mosbey accolades from his commander and his troops. He has continued his flying career after his retirement, providing pilot services for the University of Georgia, and providing basic tactical aviation instruction to the Air Force, Navy and Marine student aviators at the Naval Air Station Pensacola, Florida. Colonel Mosbey has over 10,000 hours of flight time, with more than 7,000 of those hours being in tactical aviation. His combat decorations include three Distinguished Flying Crosses and thirty-three Air Medals. 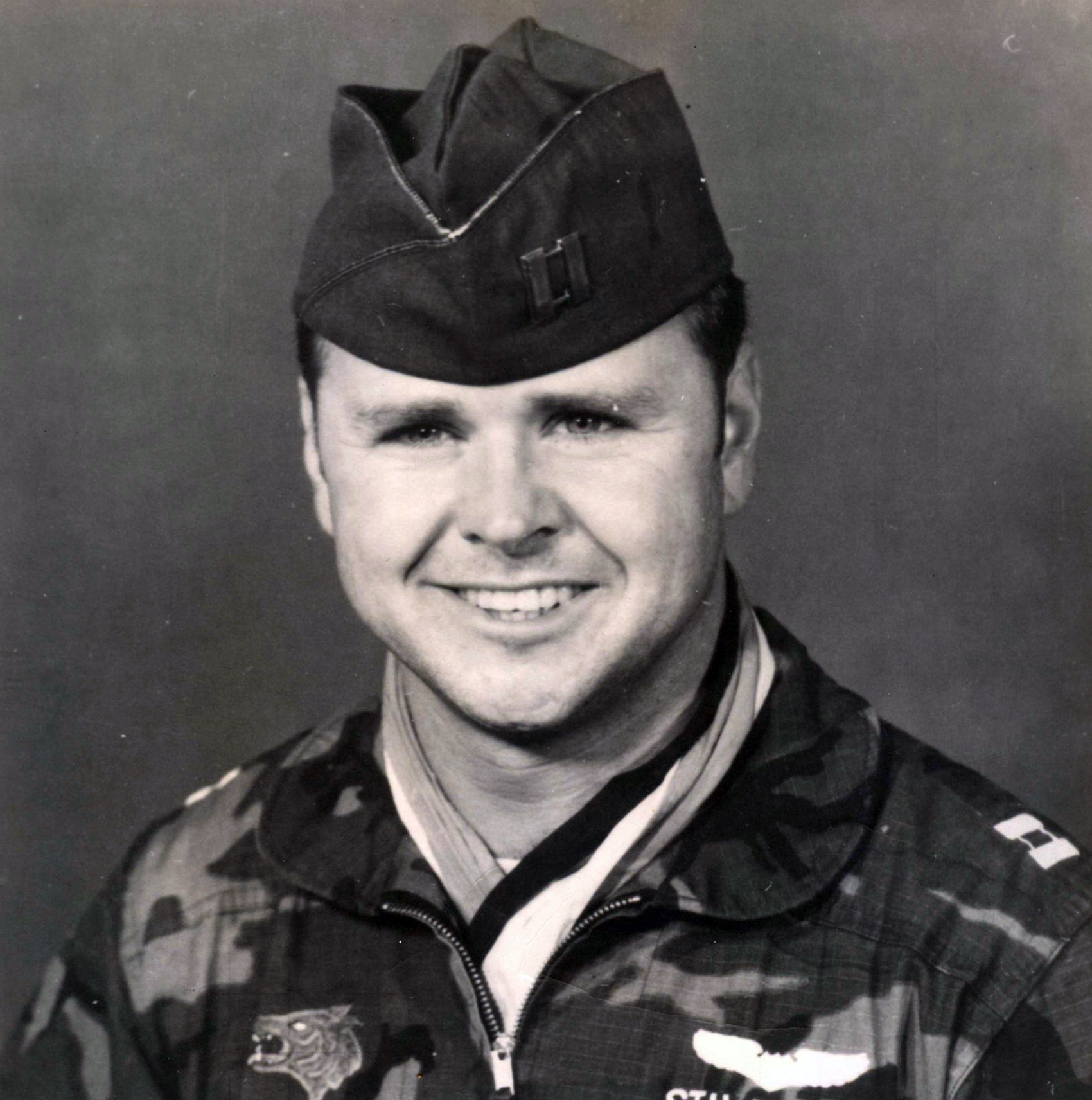 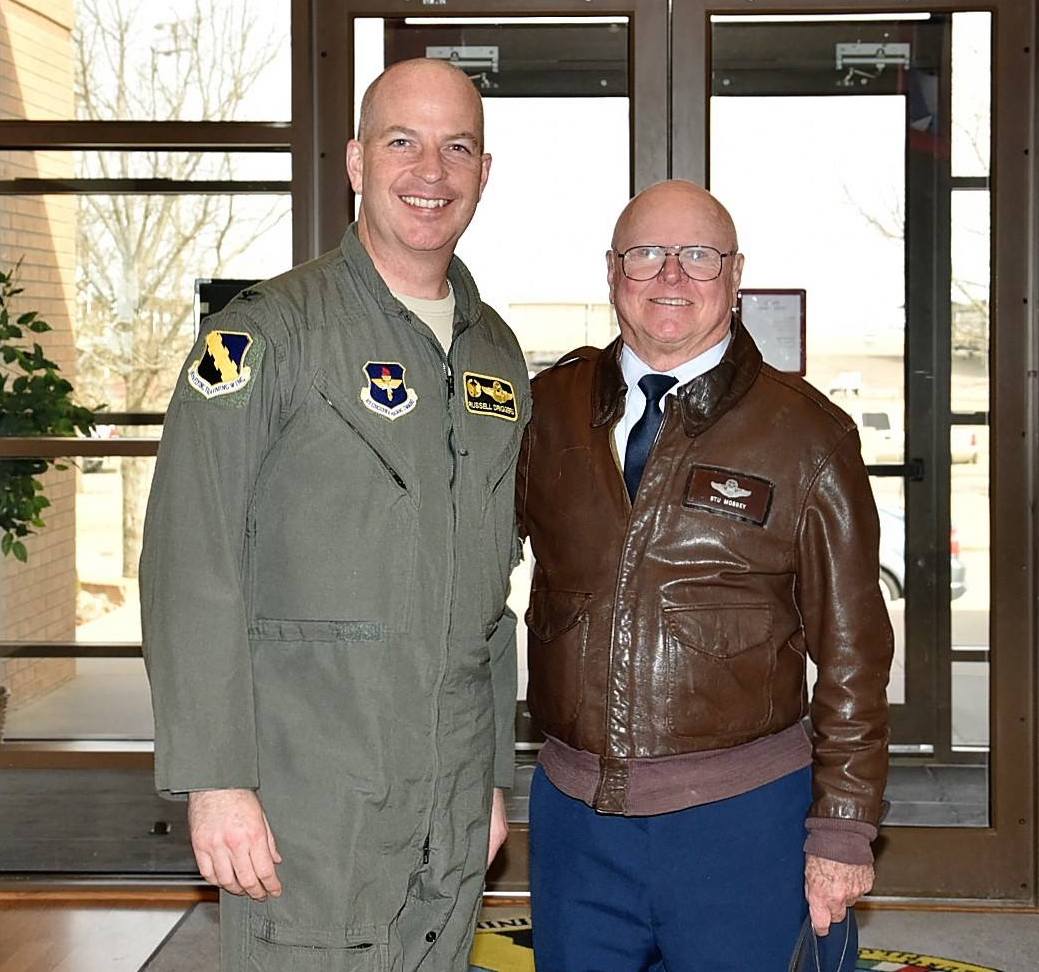 2019, Canada, Denmark and U.S. Air Forces make up ENJJPT Class 19-02, all pinning on their wings tonight.
80th Flying Training Wing Commander, Col. Russell Driggers (left), welcomed guest speaker Col. James Stewart Mosbey (USAF, ret) who will address the 19 new pilots during their graduation ceremony.
Col. Mosbey graduated pilot training with honors, trained in the F-4 and flew every model of the Phantom (AF, Navy, Marines and German). He flew 375 combat missions with 250 as a forward air controller during three combat tours in Southeast Asia. During the Persian Gulf War, his command flew over 1,500 combat sorties with no loss or damage. WIth over 10,000 hours of flight time, 7,000 of those in tactical aviation, his combat decorations include three Distinguished Flying Crosses and 33 Air Medals. In 2010, he was inducted into the Georgia Aviation Hall of Fame. New pilots learning from the best!
B