Thanks! This will be my first purchase that will hopefully go through. I tried a couple of times before for other jackets, but my orders were cancelled due to being out-of-stock when they attempted the purchase. I have fingers & toes crossed for this one. There is some kind of point thing, but all I know is roughly what I will have to pay with their fees / shipping, and it shouldn't be much over $250.00 USD total from my calculation. I don't see many in larger sizes these days, and will be pleased if I can get it..

Dany McDonald said:
I pick up my Buzz Rough Wear this WE and I really like it. It's not 100% accurate, ie colors..., but the cloth feels is like my A-9's and it's as well constructed.
Click to expand...

Congratz on your Buzz RW!.. I'm glad that you are happy with it. I'm going to be sending my Eastman down the road. It looks damn good when worn, and has a great collar shape, but the jacket is too light-weight for my taste compared to BR, and as I posted is NOT as warm..

EDIT: The Buzz L.S.L. Garment Co. B-10 purchase was successful! Helluva bargain IMO.. I'm going to be browsing Buyee regularly for certain now. As I saw posted somewhere else, the amount of roundel transfer fading is a good general indicator of overall wear and use on these jackets. I don't think that this one had much wear at all :

Technonut2112 said:
Speaking of Buzz Rickson... I ran across this size 44 L.S.L. Garment Co. B-10 in excellent condition while browsing jackets in Japan on Buyee. It's only a matter of the buying service confirming stock, then it will be purchased and shipped to me for a killer price IMO (Around what a new Chinese Bronson B-10 costs + shipping). Keeping my fingers crossed...wish me luck!

Can you guys bid without buyee points?

I looked into the points since you mentioned it, and it turns out that folks in the States don't need them. I'm able to purchase from an auction or stores by using PayPal. For example, I purchased the Buzz B-10 from a store. A hold for the amount of the jacket and Buyee's fee was placed on my account until the purchase was confirmed. After confirmed, the payment was taken. Today, the jacket arrived at Buyee's warehouse, my PP account was charged for my chosen shipping option, and I'm now waiting for the package to go out.

The points appear to be a payment option, so I would imagine you could use a credit / debit card?

Sadly, no other ways but alipay. US, japan and HK are not force to use alipay...

Not sure what are the benefit of this strategy, not impressive from my (Canadian) perspective.

Thanx for the info and post some images of your find!

Just an update here instead of making a new thread since it's already been mentioned... I just received the Buzz L.S.L. Garment Co. B-10 from Buyee today, and must say that I'm quite pleased. The jacket arrived from Japan very quickly, and well-packed in an actual box... not a mailing bag. The condition is even better than the pics, and in practically new condition. Damn sweet jacket for not much more $$ than a new Chinese Bronson or Bob Dong B-10!!

Now, off to Buyee again to stalk a sweet Real McCoy's B-15A for less than 1/2 of the going retail price.. I'll try to post a pic of my 'new' Buzz later today in the 'What Jacket(s) Are You Wearing At The Moment' thread since I will be wearing it on errands.

EDIT: Here's a pic of an original L.S.L. Garment Co. B-10. Buzz did a great job on the collar shape in comparison IMO, as well as the shell color when seen indoors: 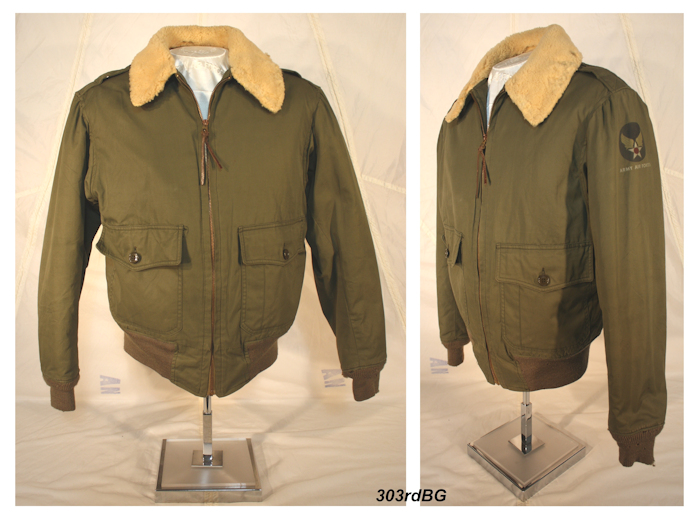