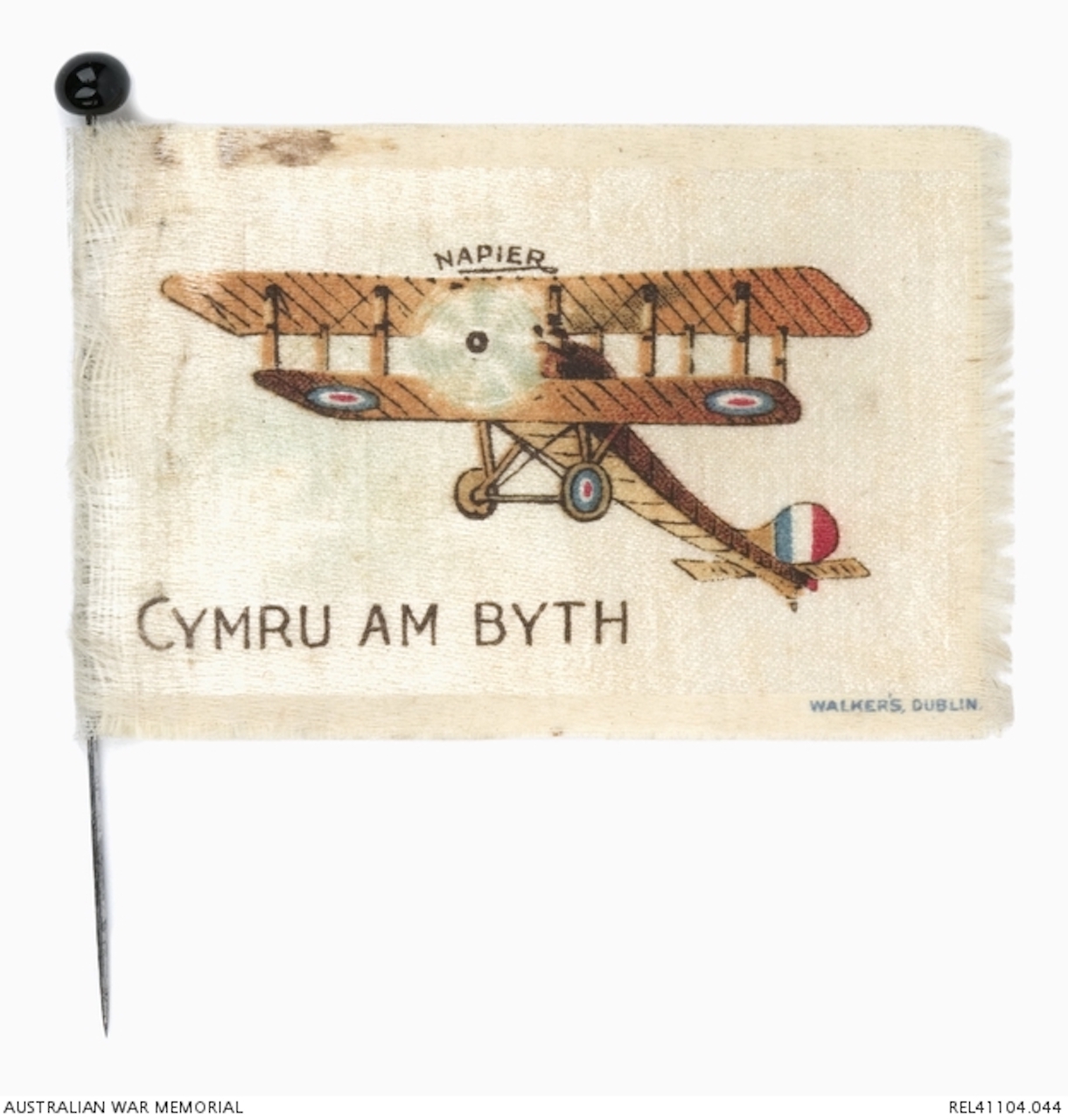 Rectangular silk flag badge with pin attachment. The silkscreened design features a Napier biplane in flight with British markings, labelled 'Napier', over the caption 'Cymru Am Byth' (Wales For Ever).
A patriotic badge with a strong Welsh flavour, it features a Napier biplane. Napier and Sons were contracted to build 600 aircraft at their Acton factory during the war, comprising 50 R.E.7s, 400 E.8s and 150 Sopwith Snipes, as well as some 2,000 trucks and ambulances. The company also developed and marketed the W-block 12 cylinder Lion powerplant. The connection between the company and Wales is not known.


Collected in England in 1918 by Lance Corporal Frederick John Knapman AIF.
When the German Army launched its last great offensive in the spring of 1918, the battalion was part of the force deployed to defend the approach to Amiens around Villers-Bretonneux. It took part in a counter-attack at Hangard Wood and helped to defeat a major drive on Villers-Bretonneux. fired gas later that night. Lance Corporal Knapman unluckily received a gunshot wound t and was evacuated from the line.

He was admitted to the Stratford-on-Avon War Hospital Convalescent Depot and the Overseas Training Brigade at Longbridge before rejoining his unit on 18 September 1918. He remained with 34 Battalion until the Armistice. He went absent without leave (AWL) for nine days in August 1919 from the AIF's Sutton Veny camp, losing his Lance Corporal stripes as punishment.

Napier & Son also built a number of aero engines under licence during the Great War and went on to obviously build the legendary Sabre engine which powered the Hawker Typhoon and Tempest.

They were also used extensively in Brooklands and record breaking cars between the wars. The best known now being John Cobb's Napier Railton Special which is the lap record holder at Brooklands at just under 150mph. In 1939 the circuit closed forever so it will always hold the record.

I always loved that car and use it for my avatar.