Catch-22 ELC Yo Yo actor jackets up for auction

You'll probably find, that the original presentation jackets, those first ones used for fit, screen and camera tests and promo, will have original contract labels (like that Star)... As those will likely be off-the-rack jackets of various makes and models.
Then, once wardrobe decides/ chooses the actual jacket for a particular actor, then they will make a number of versions of THIS 'Hero' jacket, of which there will be a few 'Heros' and a few back-ups, plus the same deal for stunt and stand-in guys, if any...(I highly doubt these will all have the proper contract labels).
And thats just for Yo-Yo...
If ELC's house/ generic label is cheaper, even if its not, I bet they just used those for most of the jackets, as the interior is not that important in the actual filming.
I also wonder who put these together... ELC had to continue std production alongside supplying for the film, perhaps it was one ELC production team making all of these and I wonder if any corners were cut to save time/ money... As is usually the case. So, it will be hard to be certain of anything.
I find this all really interesting myself.

Brettafett said:
As Grant said... In production, they make thier own rules according to needs. Thats likely a RW27752 A-2, but with a std ELC label. Thats defo not a' house' A-2 collar or fit on screen.
They really don't care about labels. Its all about lighting and what works for the camera. ELC likely made tons of these jackets for the production and I'm sure there a mix of std off the rack jackets of various makes and models... and then some customised ones...
They always have a few back-up jackets, once they lock-in on the screen or 'Hero' version... in case something happens to the 'hero' jacket, for continuity-sake
So, you'll likely find a number of 'Yo-yo' jackets. I recon at least a few have the correct RW label... at least one will have it, maybe the original 'hero' jacket... this Ebay one is almost certainly only one of a few made for the actor... Likely one of the back-ups and no-one in 'wardrobe' dept cares what the labels says, as long as its clearly marked Yo-Yo... I bet the actor has one also
Click to expand...

Nah, sorry , had to disagree. That is because ELC do care about the standard of jacket they make. I know were Grant is coming from and companies like Wested would make alterations according to production need, but I can almost guarantee jacket design are not taken liberty of here. Unless Rob or someone at ELC can confirm I stand correct in saying YoYo's jacket is a House A2.

Remember the BBC drama couple of years ago? ELC offered the jackets for sale last year and there is no liberty over the labelling or customising. They just don't do it.
Last edited: Jun 12, 2019

Yes, but its not about the standard or design, thats not what I meant, apologies if i gave that impression... and the quality would be the same... ELC won't compromise on their production standards.
Standard patterns, but generic labels...perhaps.

After fit and screen tests, its very possible ELC would be required to add length or reduce length to a sleeve for example, for a specific 'Hero' jacket. Not changing any pattern. (And I'm not saying they did, at all. Only ELC would know that for sure).
Although ELC does not 'customise' or fiddle with patterns, almost every ELC I have had, has had slight modifications to length, between an inch added in the body and 1 to 1.5 in the sleeves. If they've done this for me, I'm sure they would do it for a large film contract, IF REQUIRED.

But, I agree, I doubt this was required for this series. Just saying, it happens.
They sometimes do have to experiment with different finishes, due to how the leather is interpreted by the cameras and lighting conditions.

So, either that jacket in the pictures above is a RW27752 with a generic label, or its a House A-2 with a collar stand... So neither is technically correct by ELC's production standards.
ELC won't make this 'mistake' lightly, unless it wasn't a mistake and just a film production thing.
I highly doubt ELC would add a collar stand to a House jacket. Its more likely they just used generic labels for some production jackets, in this case a RW27752.
I would interested to know if these movie 'production' jackets have the horsehide label and the various other stamps and bits that the standard retail jackets have.
And that collar of Yo-Yos jacket in the series, looks an awfully lot like a RW27752 to me, especially the recent ones.
I may be totally wrong, but the RW has more collar at the back than a House A-2, for the same given size.

I was also in film production and all I'm saying is just my opinion, but based on what I see on screen and what I know of film production, a number of jackets would have been sent to the Production wardrobe dept for fit and screen tests, based on the actors sizes and measurements provided to them.
A cross section of jackets would have been selected for the actors, based on a number of factors. They would try and get some variation in there, which they clearly did.

Then... say a RW27752 (for example) was chosen to be Christopher Abbot's screen jacket, this 'test' jacket was likely a standard off-the-rack RW27752 with contract label and everything. Same thing you or I would get from ELC.
(After fit and screen tests, its entirely possible that the wardrobe dept would request this jacket, but with length added to the sleeves for example. Again, I'm not saying this happened, only that this is the part and parcel of the production process, depending on budget, time and size of production).

Then they would say, "ok we need three of these", for example... and its entirely possible again, that the ELC film production team then made 3 RW27752s but because of the nature of film production, just used generic labels. Of course, I may be wrong.

(The promo photoshoot jackets, are likely from a mixed bag of jackets, that were provided for the shoot, not necessarily the same jacket the actors wore in the series).
Remember ELC was not involved in actual production. They were given the orders and had a certain time limit to get all these jackets to wherever the powers that be required them... then the wardrobe production dept did their thing. Its a massive process for a series of this scale. And these guys do not care about A-2 contract variations or labels.... Their main focus is continuity, that everything looks the same. They would be more concerned about thier own Yo-Yo labels and that Yo-Yo's jackets were all stored together and accounted for.
There would even be prod assistants who's job was to make sure the jacket was given to him before a scene, and then taken from him after the scenes wrap, and then placed in a very specific place, so it doesn't get dirty, damaged or lost!

The Mother series was a small production, only a handful of jackets were made and used, all off-the-rack jackets, standard fits, all with the Timeworn process applied... a RW, a Star, a Werber and some others... and those were returned directly to ELC. I spoke to Rob about it at the pop-up a couple of years or so ago, handled them all and even tried the RW and the Star on. Catch-22 was a much larger production. Much bigger budget.

Edit: In fact, those 1 or 3 jackets, could also account for the process from first try on, fit and screen test, through to final 'Hero' jacket.
In this process the detailing is not important. Its all about fit and screen appearance etc... So, those jackets could possibly not even have made it onto set.
Last edited: Jun 12, 2019

Greg Gale said:
The auction says "stunt double" so it wasn't Yoyo's jacket, but his stuntman's.
Click to expand...

There are two jackets and links provided of the listed at auction . One a stunt the other a “hero” worn by the actor

Makes sense that the Stunt double got a 'House' model , but Yo-Yo's jacket in that ad, (1 of 3 in that link) is a Star. Look at the pockets, (not to mention the collar) and then compare with the jacket he wears in the series, they are different.
So, maybe the Star was a 'test' jacket, or one of three jackets Mr Abbott tested in, (imagine he was given a Star, a RW and another contract) and ultimately a RW was chosen.
Interesting note, it states in the ad that, "Most interestingly, it's a Size 42 Long". So clearly tweaks were made.

Confirmed from a very reliable source on the production, Yoyo was wearing a standard Eastman House A-2. The Star was made for him but not used.
I mistakenly thought it was a collar stand A-2, but am the first to admit when I'm wrong!

Whatever it was, that was one helluva collar on that thing!

Maybe I should offer up my old Eastman House jacket as Yosarrian wardrobe and ask $3K! Just kidding! 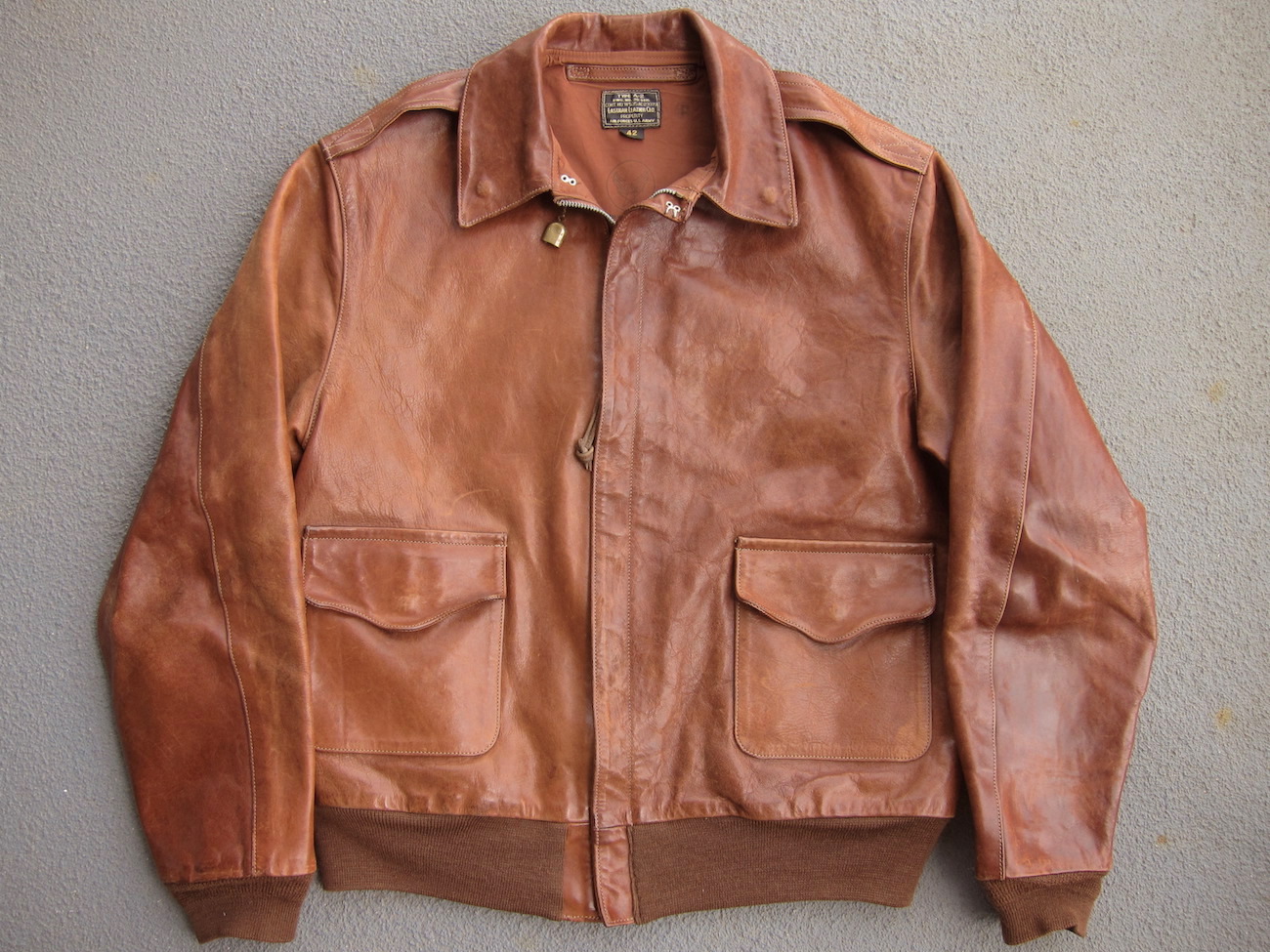 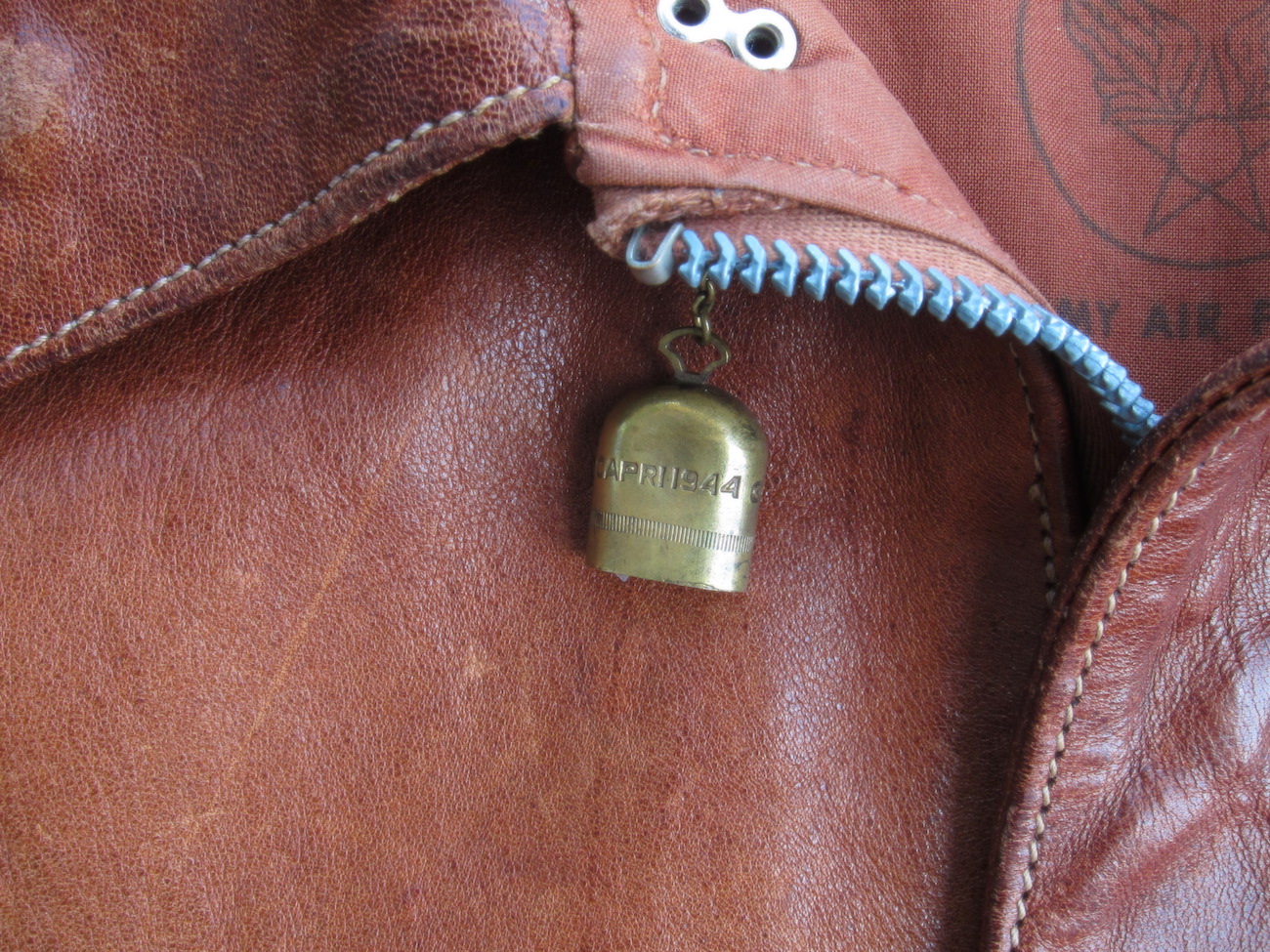 Nice looking jacket Grant. How old is that one?

How much have the ELC house jackets changed over the years? Were they shoulder droopers like the Pearl Harbor ones and baggy in the waist?

Pssst...if you want to fool the Catch kids Yo-Yo had his Capri bell on the port side

Not sure how old it is - bought second hand probably four years ago and worn the hell out of it.
I've never owned one before this one so can't speak to if they've changed.
Hahaha, thanks for the YoYo bell location!

The colour really is lovely looking on my monitor.

I was always a seal guy but some of the russet ones are really growing on me now.

Thats very interesting. I guess appearances can be deceiving. An ELC House it is...
However, is it just me or does this jacket have a collar stand? 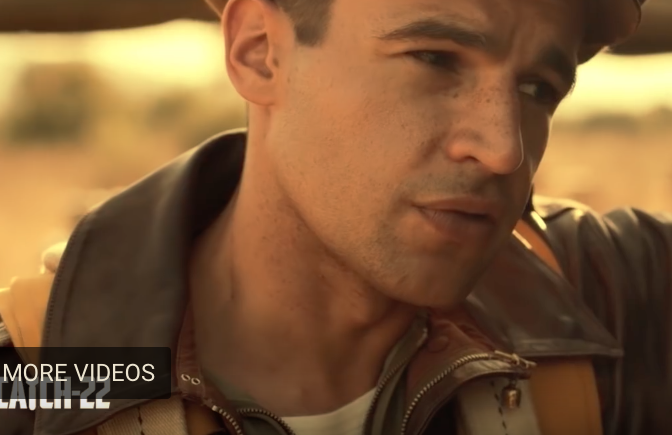 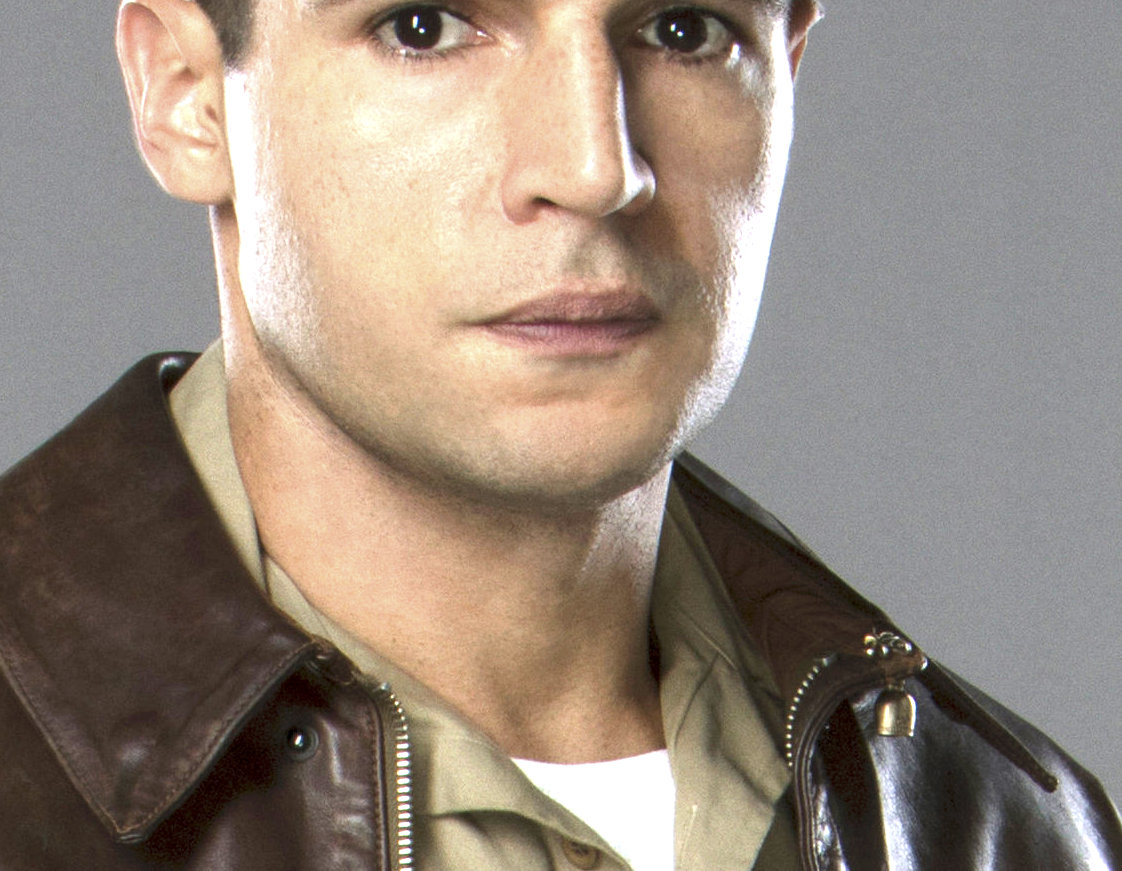 Grant said:
Confirmed from a very reliable source on the production, Yoyo was wearing a standard Eastman House A-2. The Star was made for him but not used.
I mistakenly thought it was a collar stand A-2, but am the first to admit when I'm wrong!
Click to expand...

then that devalues the wanted auction price. no way its worth 3 grand if it was rejected for final production. so the guy had it on for a few minutes... maybe.. if Harrison ford wore it during preproduction it still wouldn't be worth but current market value. pretty jacket but unless actually screen used its worth $1100 in my opinion.

Oh and based on those two images I do not see a collar stand in the top photo, just standard stitching...

The second [lower] I'm not so sure about.

Apologies edited this post soon after sending - after copying the pics and enlarging them in a photo app. 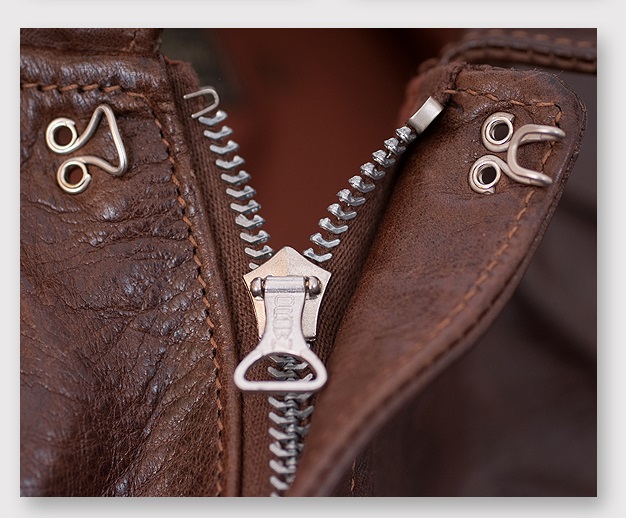 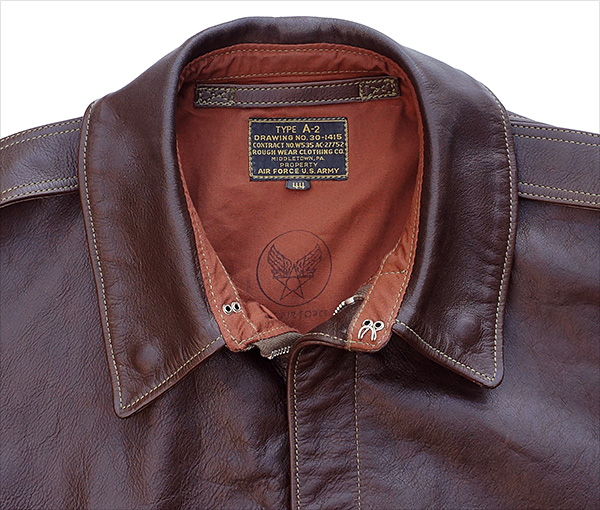 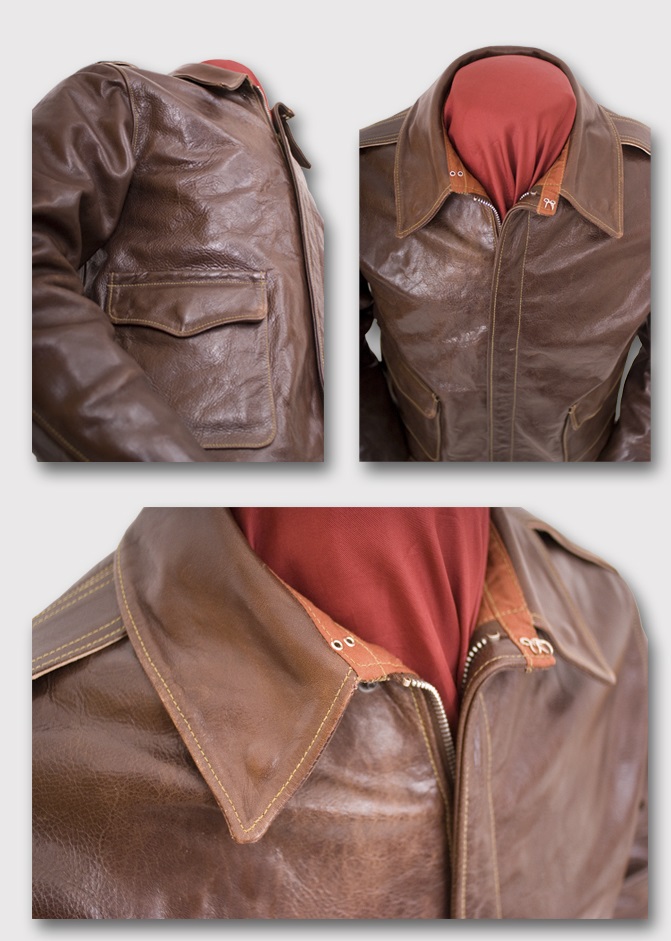 It has to be a collar stand.

Sorry for the delay in replying but I already knew the answer to Yo Yo's jacket months ago. I thought you guys would have known or eventually figure it out.
The answer is the actor Christopher Abbott on screen jacket is an ELC "Pearl Harbor" jacket. Some folks misses the fact that this is also an ELC house jacket but it is concieved by Eastman and does not follow an original contract that why it has an Eastman label as do all their house jackets.

Rob from ELC congratulated me for discovering this.


It has to be a collar stand.
Click to expand...