Just spied this in Japan.. With a better patch this would be a great jacket. 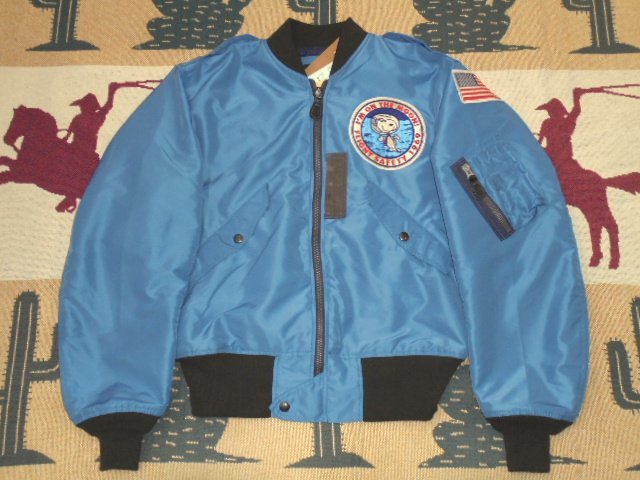 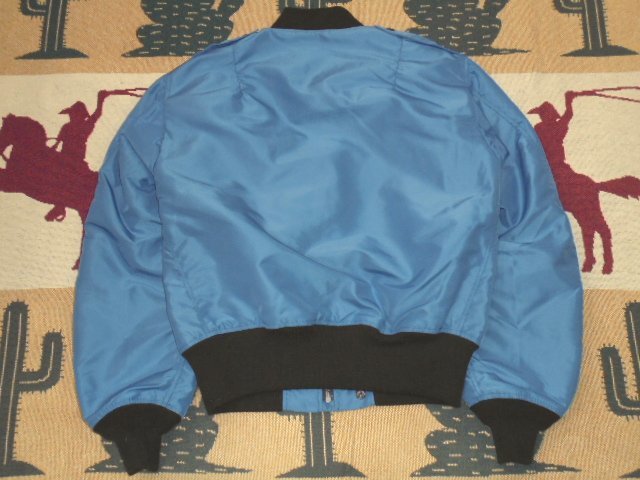 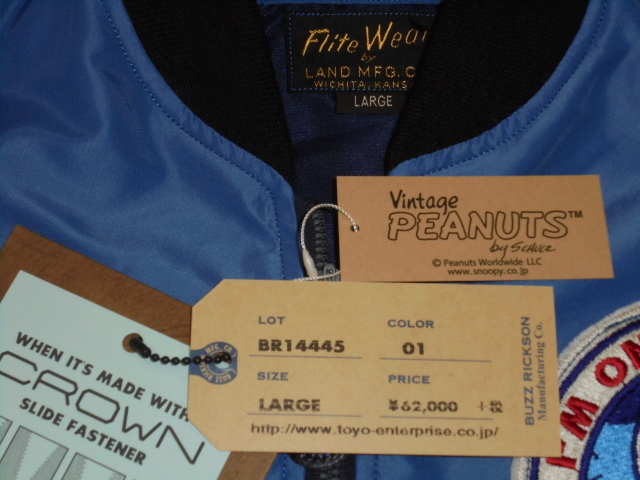 ◆ 2019 model
◆ Manufacturer ・ Toyo Enterprise
◆ Brand Buzz Rixons
◆ Product name ・ L-2B (SNOOPY) Custom model
◆ Product number ・ BR14445
◆ Size ・ L
◆ Color ・ Sky blue
◆ Material ・ 3/1 Heavy Nylon Twill
◆ Lining ・ 50% wool 50% nylon Double face
◆ Knit parts / wool
◆ Zipper ・ Crown auto-lock zipper
◆ Label ・ LAND MFG.CO. Company real name reprint name
◆ Actual size ・ Shoulder width approx. 50 cm ・ Width approx. 60 cm ・ Sleeve length approx. 66 cm ・ Length approx. 65 cm (Collar ribs are not included in the length)
◆ Fixed price ・68200 yen including tax
◆ Condition ・ New and unused
◆ Product description
The introduction of "nylon", which is lightweight yet has steel-like strength, was very epoch-making at that time, and the flight jacket reached the maturity stage. In 1958, the United States established NASA, a federal agency responsible for planning space exploration within the government. The endless dreams and insatiable quest of mankind, soaring faster, farther, and higher, eventually jumped over the atmosphere, and mankind encountered a completely different sky. Space development to date has realized the first human landing on the moon in the Apollo program, long-term space stay in the Skylive program, and the space shuttle space shuttle. There was no strict regulation color for the space suit worn by astronauts, but it is not difficult to imagine that it is different from the military regulation color and that sky blue is adopted as the color that imagines the sky. .. Space suits have evolved along with space development, but this jacket is an overture to space suits and is a memorable piece that condenses human dreams.

In 1969, the endless dream of space finally came true. The first lunar landing in human history was achieved by Apollo 11 in the United States. While the command module operator was waiting on the command module Colombia on the lunar orbit, the two lunar landers Eagle were separated from the command module and landed on the moon. Two months before Apollo 11 landed on the moon, the command ship of Apollo 10 launched as a rehearsal was given the nickname "Charlie Brown", and the moon lander was given the nickname "Snoopy", and Astro Notes. "Snoopy" was appointed as the official mascot of NASA's Apollo program, the first lunar-headed character in the program. In praise of the 50th anniversary of human landing on the moon, it is this Astronaut jacket that marked the beginning of the space suit, and the patch that the official mascot Snoopy landed on the moon is spectacular.

◆ L-2B explanation
Type L-2B is the third model in the L-2 series and is a light zone flight jacket that has been used for a long time from the mid-1950s to the 1970s when the CWU36 / P was adopted. The biggest change from the L-2A is the body color, and after the Korean War, the USAF changed from the previous Air Force Blue to the new designated color Sage Green. In addition, the size display has been changed from inch display to S, M, L display, and the size specifications have also changed, making it a looser overall type. In addition, the nylon structure of the surface material has been changed, and the lining material has also changed from wool nylon to wool rayon. The lining color of the L-2B made in the early stage was sage green, but from the middle stage onward, the orange rescue color has been adopted.

Just for fun, here's Jorge superb Land original.
Buzz were almost there... They could have sourced a Scovil zipper and Conmar for side pocket. Orange Nylon would have been a nice touch too. Stitching for the knits is also wrong, not top... 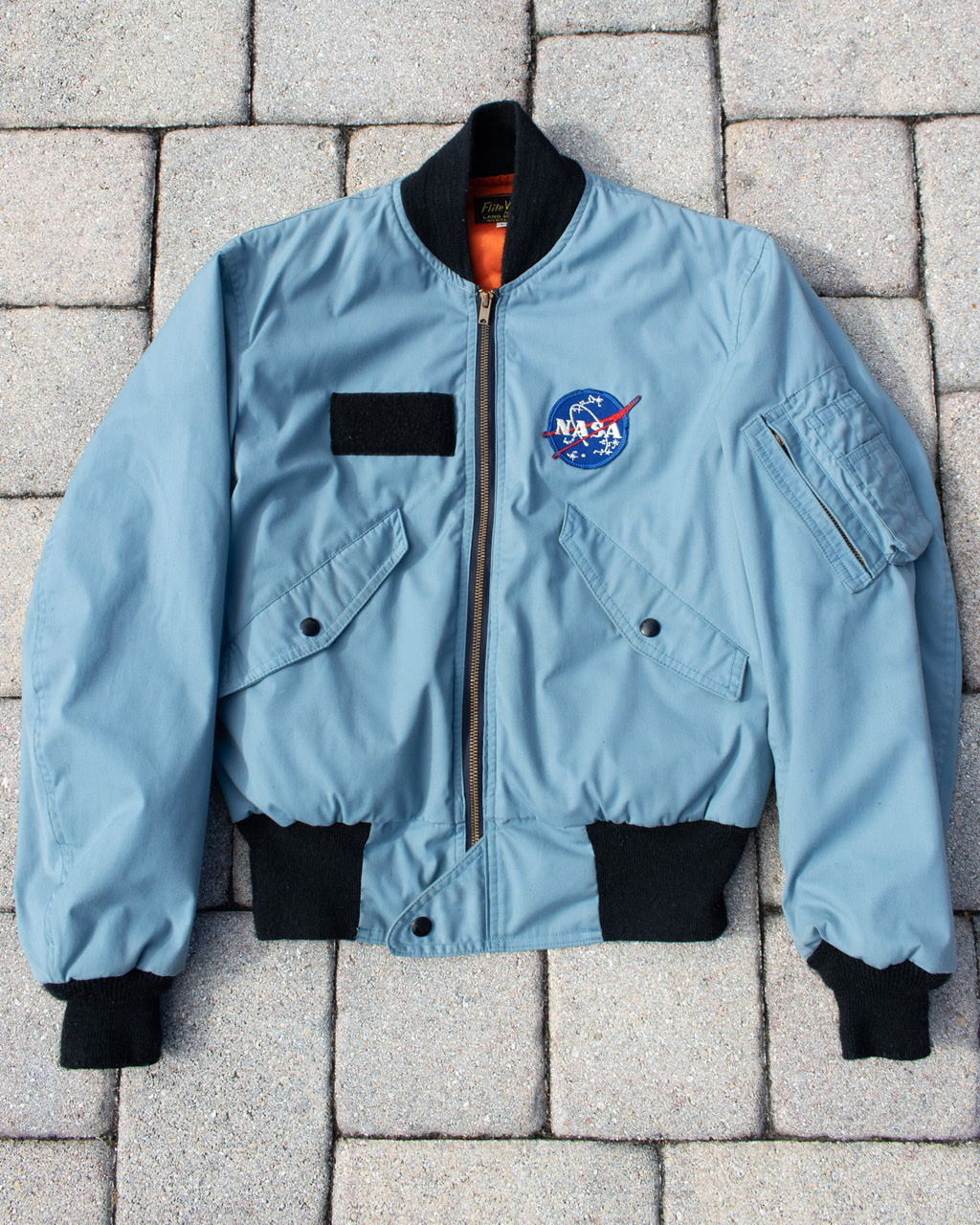 Posted the pics in Jorge's post. The Land Mfg Co was represented personally...

It’s a cool model, and the red MA-1 is super cool as well. Both are on my wish list.