Bill Kelso timeline of leather, with a little wear thrown in...

Seeing Earloffunk's post of his BK jackets and the subsequent conversations about the leather, and not wanting to hijack his post, prompted me to show a little history of the BK Hides with some of our jackets to give an idea of how they wear over time.

I'm pretty hard on my jackets and wear them when I can and doing almost anything, including mucking around on the garage floor

First up, Werber 1402-p. This is their 'Antique HH' 2013/14 ? vintage when they were really starting out and on the road to getting good, no longer available unfortunately as I think it was one of their best for a natural drape. It was their first experiment with developing a time worn appearance up front before you wear it. The top darker russet reveals the lighter russet underneath with wear. Hide itself is fairly thick, almost a half thickness over ELC''s hides. The Werber was one of their first contract jackets. Didn't take long to wear in at all and quite a bit of solid wear has led to this. Ver tough jacket and takes a pounding well. 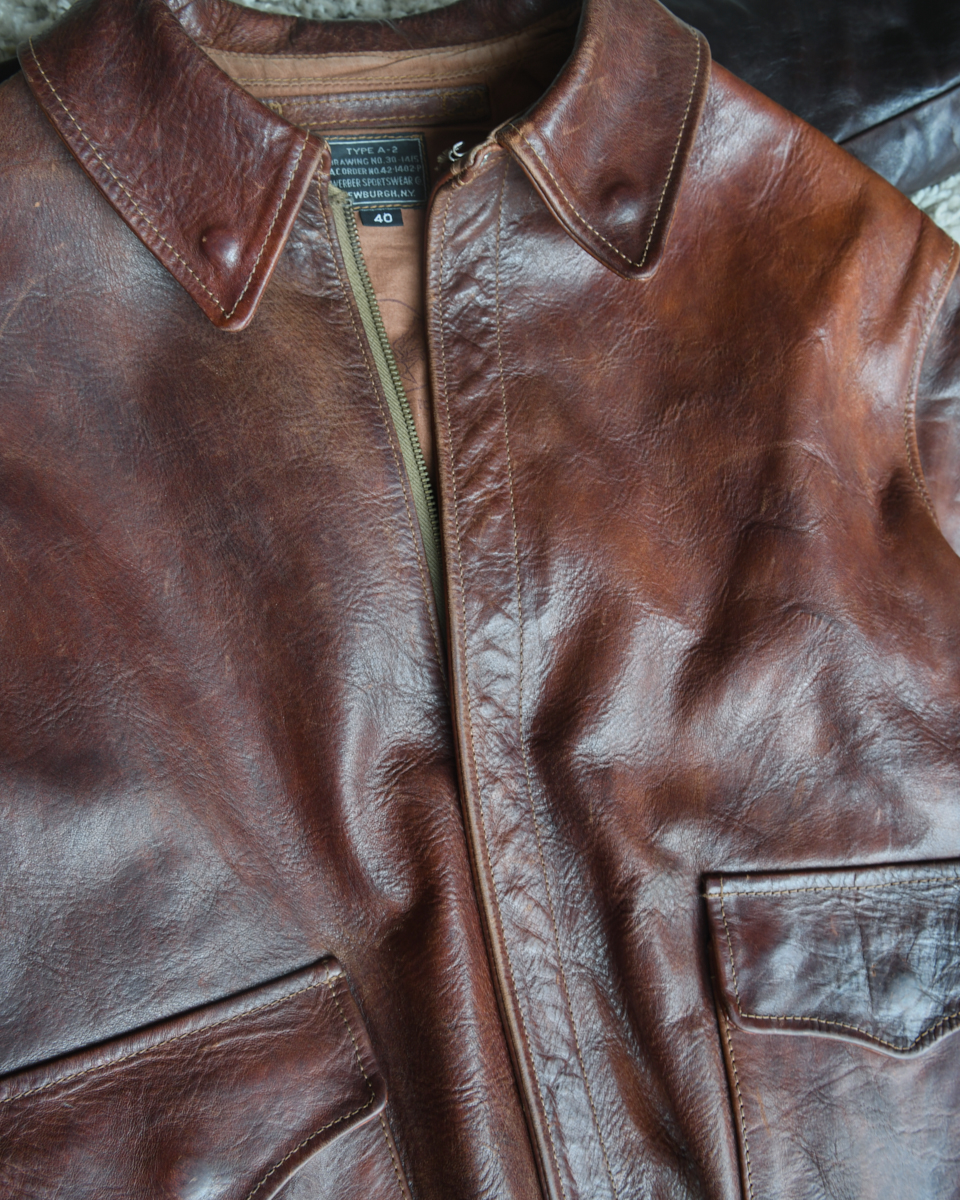 Next, AN-J-3. Victory HH in Dark Seal. this example is 2014 vintageI really like this hide but it took almost a half year of wear, and some hot water treatment before it wore in completely, has warm red tones within the darker seal brown and a buttery thick luxurious feel to it. similar thickness as the Werber above, with a more natural patina occurring in the wear zones than the Antique HH which it superseded in their 3 hide colours of Russet, Seal and Dark Seal. Unfortunately this hide is no longer available; when I commissioned this jacket Victory Horse was approx 700-800 Euro, last year when I looked it was over 1000 British Pounds which may have led to its demise. Last, the wife's Duke in Russet a beautiful colour, purchased a couple of years ago (2016). Liberty Horse, their more current offering which looks and wears fantastic and squeaky as all hell, this was early after they brought out the Liberty Hides so the later offerings might be less squeaky, others Like Earloffunk's Dubow as he's says are not squeaky at all, one can only hjiope they've sorted that problem out. She's probably worn it a handful of times. A little thinner than the above jackets but still thicker than ELC's hides. Quite buttery smooth to the touch, and as you can see with little wear it develops character quite quickly, it is still a little stiff and not draping as well as it should but with more of the wearing hopefully it will be less noisy and more relaxed. 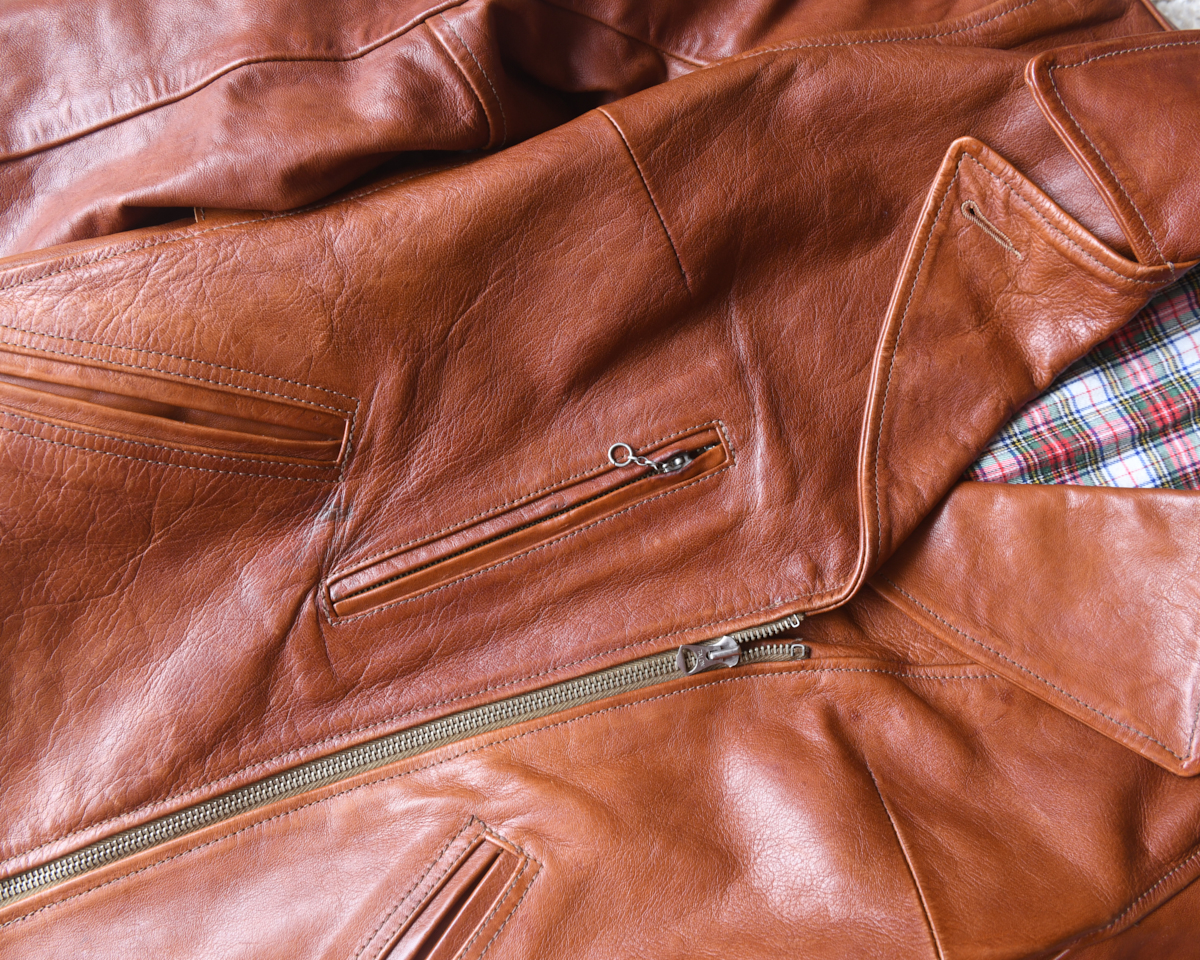 Alan, those seal hides on your BK Aero loo identical to an original. One of the nicest reproduction Aero's I've seen in a while.

Grant said:
Alan, those seal hides on your BK Aero loo identical to an original. One of the nicest reproduction Aero's I've seen in a while.
Click to expand...

That Aero is a beauty. I’m surprised BK jackets don’t get more coverage, they are the equal of any of the high end makers IMHO.

Here are several image of the BK Victory Capeskin in seal (on a custom early Type A-1 variant). It's one of the most comfortable hides that I've worn, with irregular grain that is really close to period photos of Type A-1 jackets. 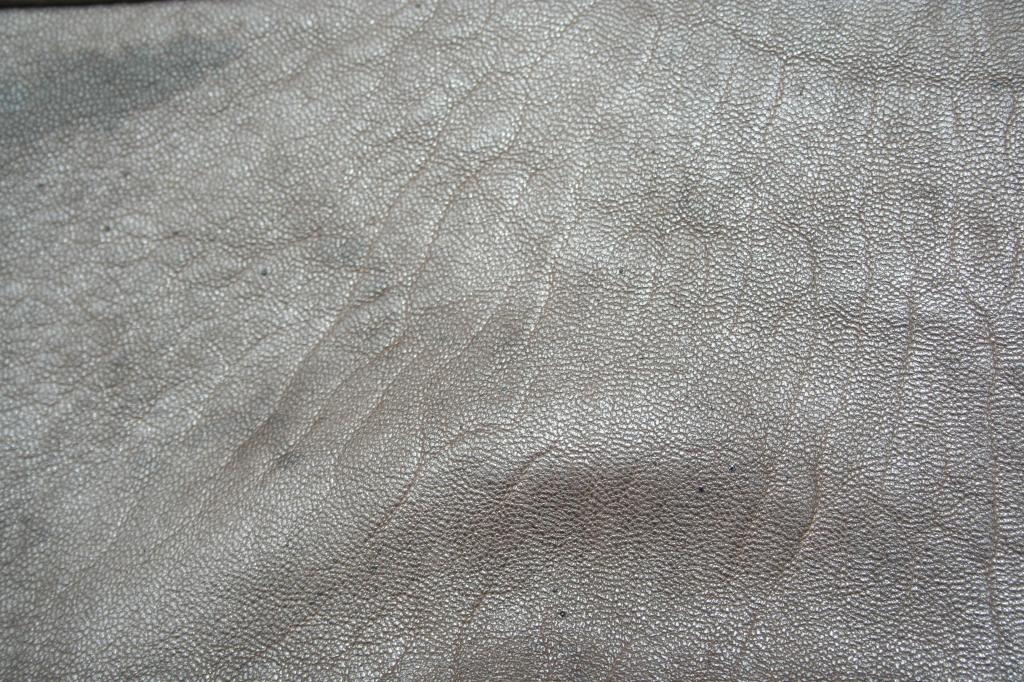 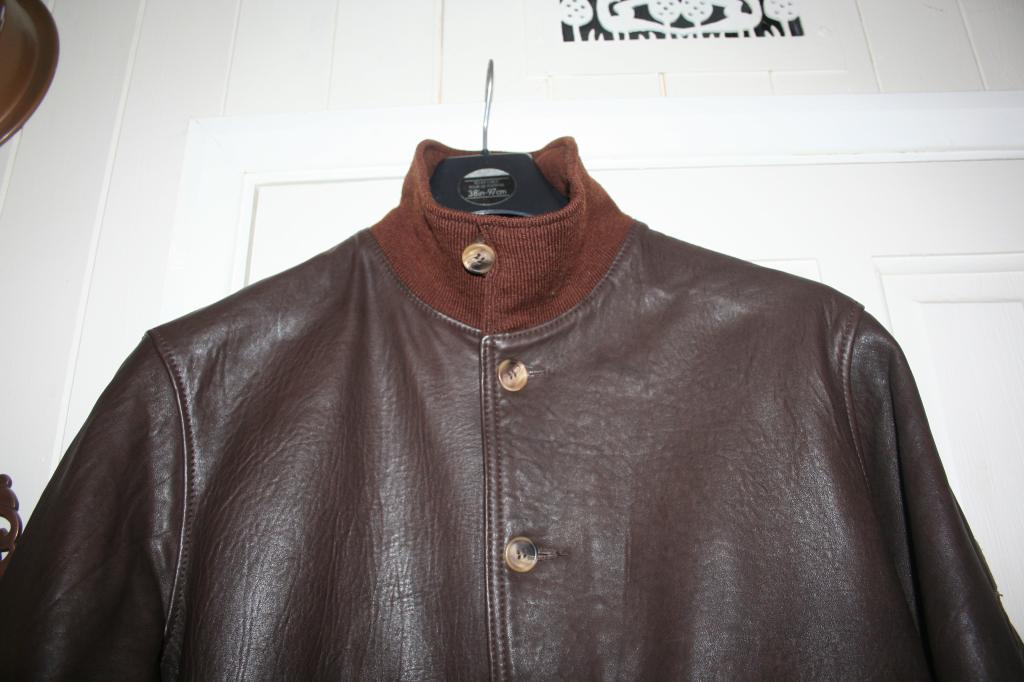 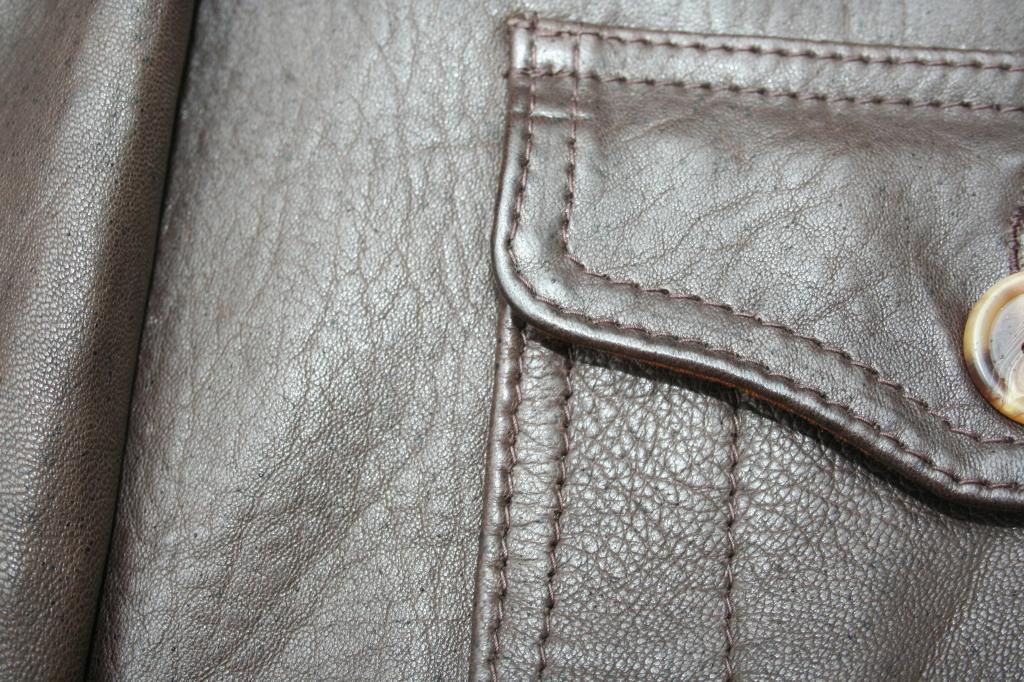 stanier said:
I’m surprised BK jackets don’t get more coverage, they are the equal of any of the high end makers IMHO.
Click to expand...

I think that might have something to do with the abrasive nature of one of the people involved with the company. An ex member here who was barred from the forum. I know he put me off dealing with them.

Peter Graham said:
I think that might have something to do with the abrasive nature of one of the people involved with the company. An ex member here who was barred from the forum. I know he put me off dealing with them.
Click to expand...

My Werber has had minimal wear; however, the hide is very similar to yours. Victory 'Ultra' vintage horsehide was the label BK put on this style of hide. I think the 'Ultra' pertained to the extra grain. When I ordered it five years ago (that's gone quickly) he had enough hide for a few jackets. 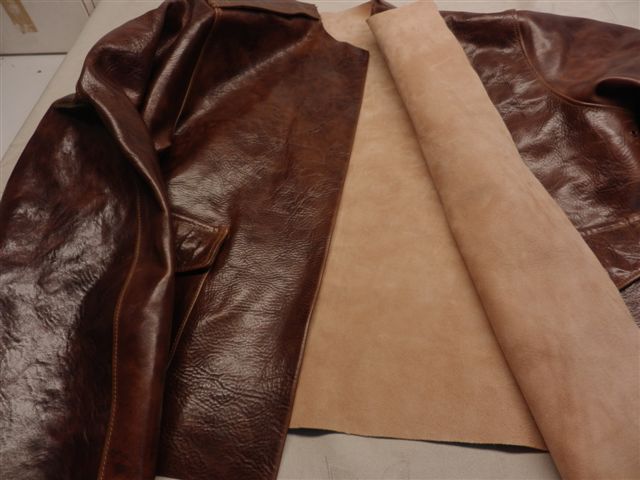 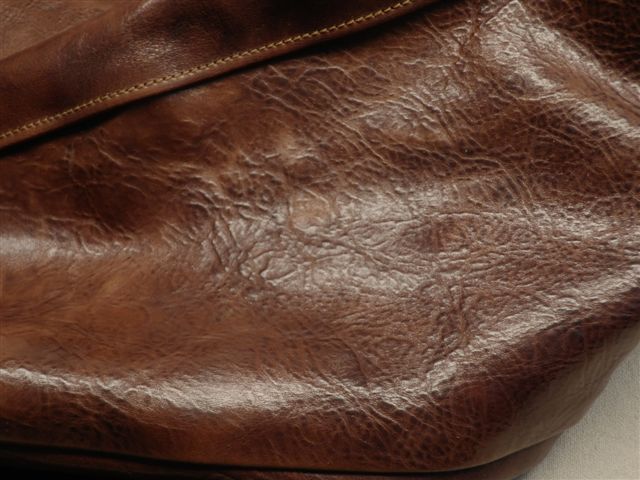 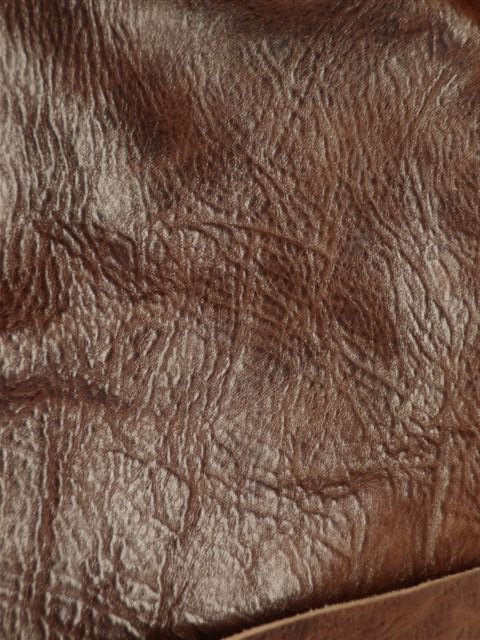 The sheen has diminished somewhat over those years and it is almost Aero-like for durability.

Yours was one of the last of that Ultra hides wasn't Couchy?

Looks great, no lining? Didn't yours have the marine camo pattern or was that another jacket?
Last edited: Jan 25, 2018

That AN-J-3 looks amazing. Is that the same leather as their current Victory HH (at something like double the cost of the Liberty stuff)? More pictures please! Is it as comfortable as it looks?

Thanks M3Cav. Its an early Victory H, before the prices went ballistic on it. I think BK were continually developing it to its later pricIer version. It is a sensational hide and I love this jacket to bits, extremely comfortable will never part with it.

Here's pics with me in it coming soon...

WWII HBT lining and an original Crown zipper. It is my all time fave....

Here we Go, would you believe Im wearing shorts and working up a sweat in 90% relative humidity and 28'C ? 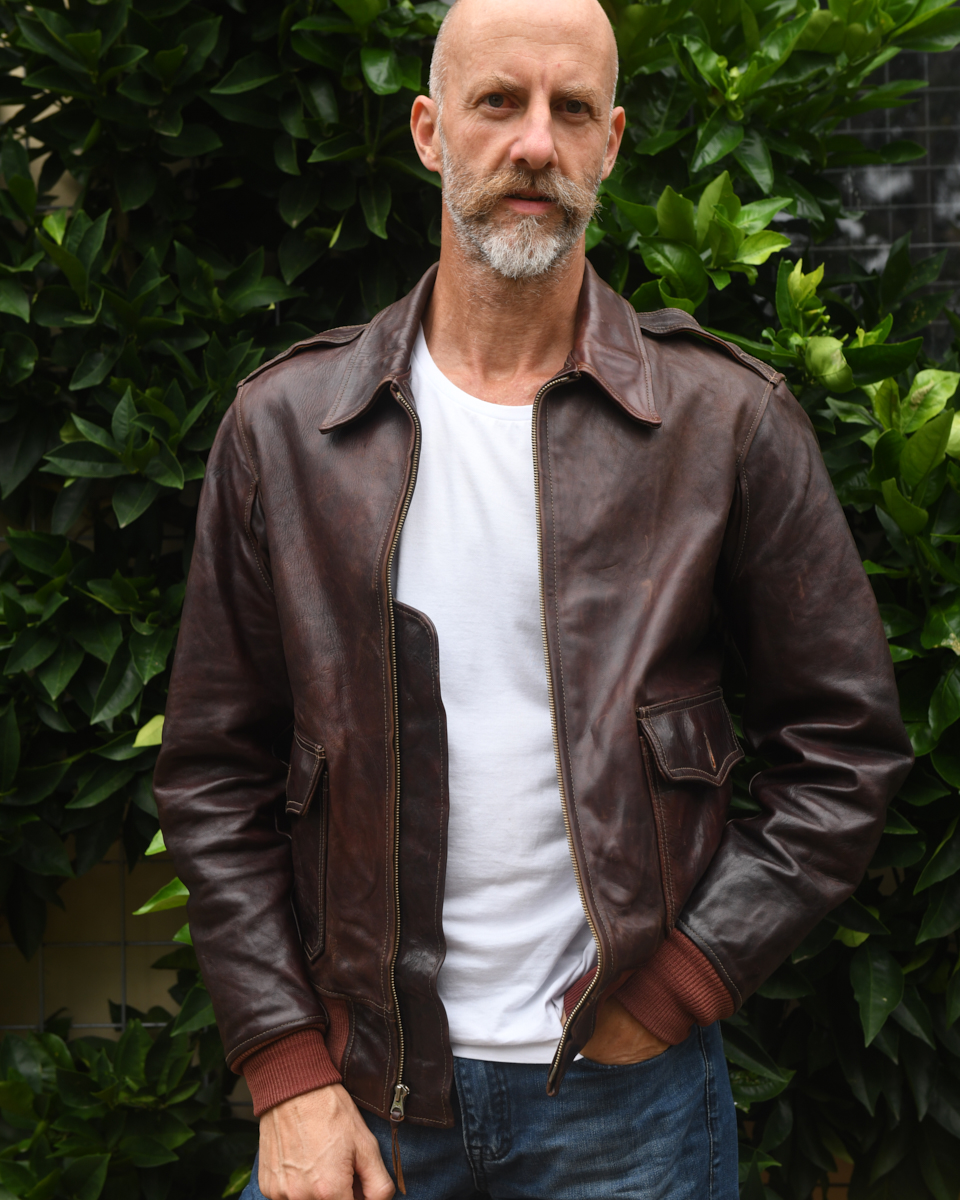 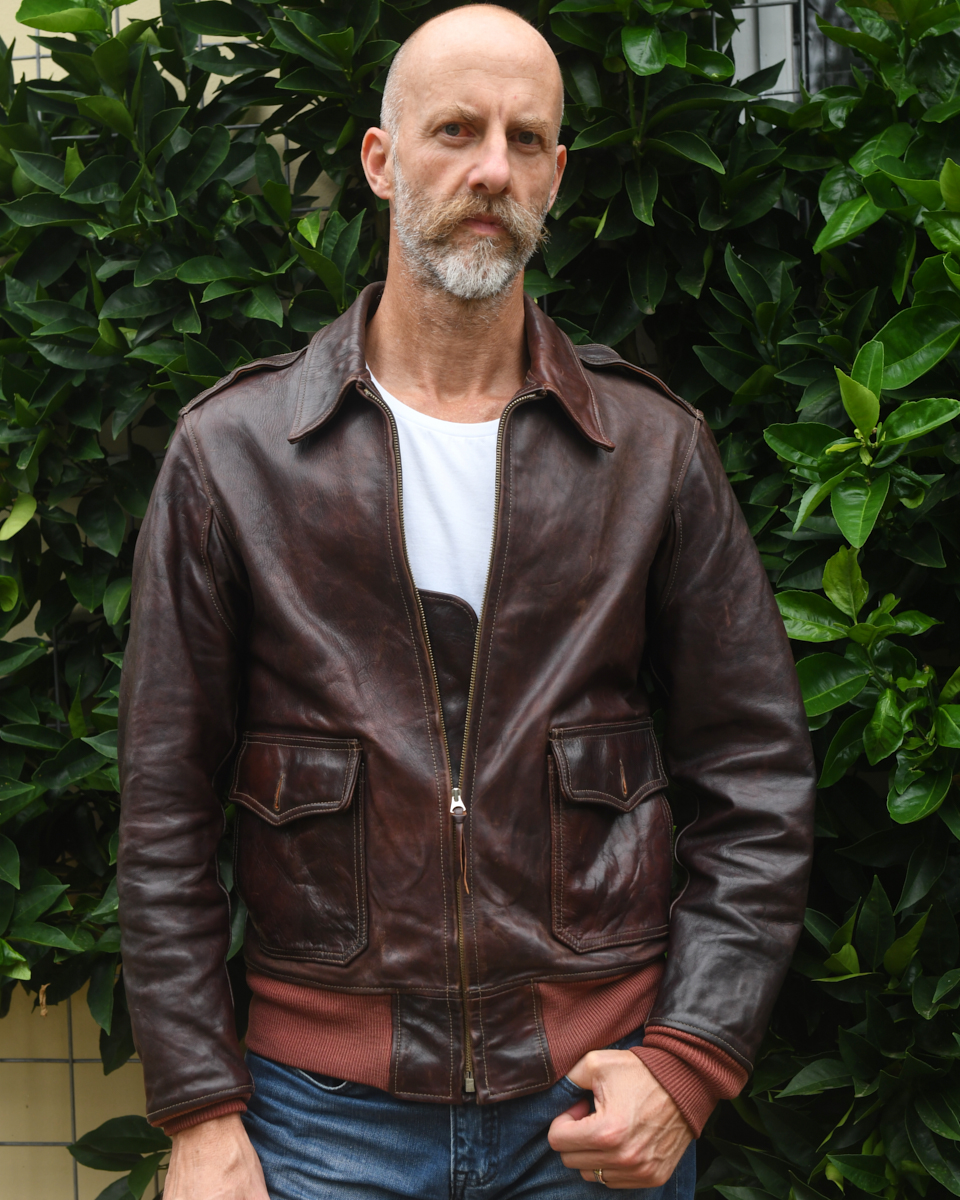 and here's the Werber 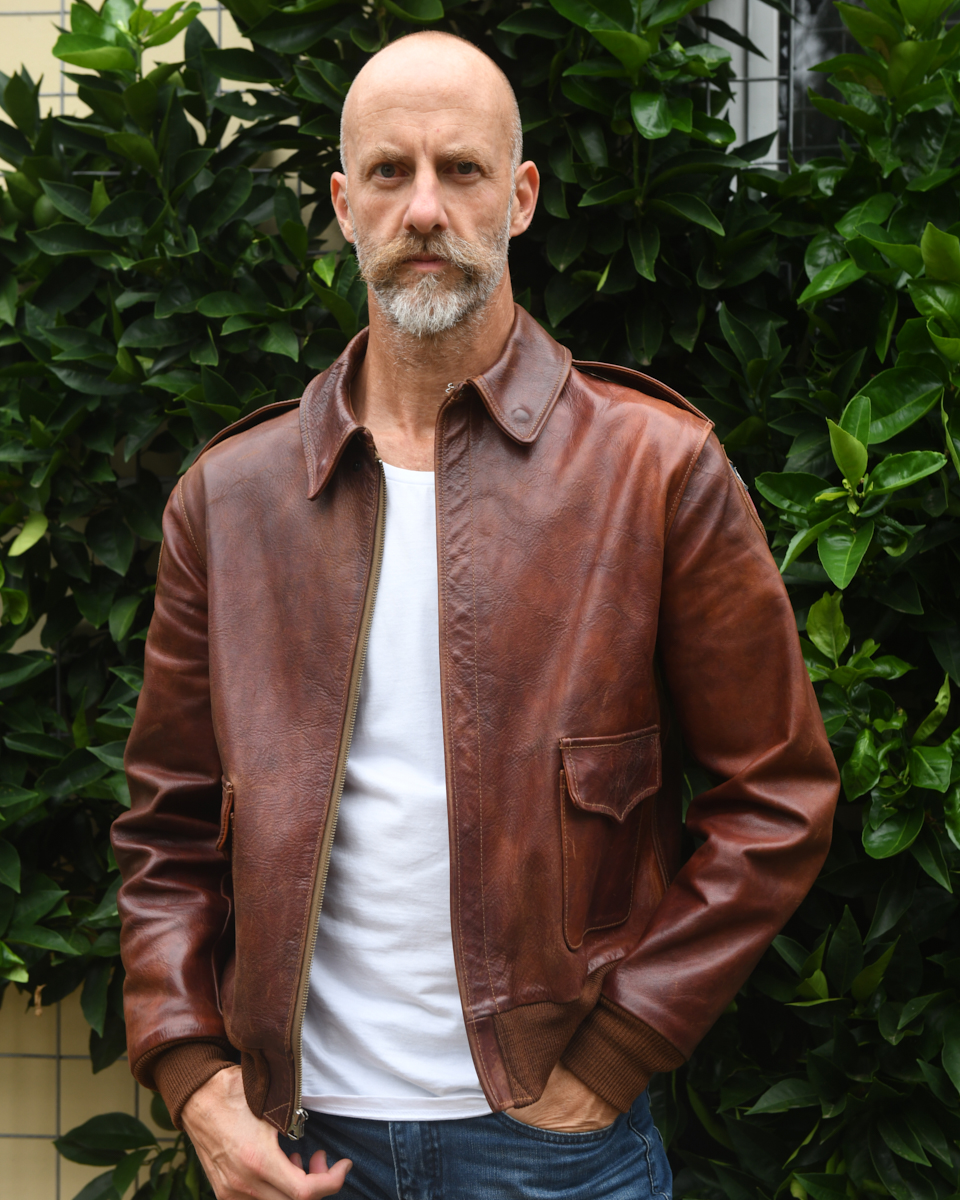 Button up that pocket.. Tomorrow, your safety catch?

Your jackets have that "Been there done that look" Sweet!!
Really like the color fade on the Werber. Is that the lighting or is the hide developing a " mixed batch "type of look?

B-Man2, in the cooler months they go pretty much where I go. Wear 'em to work, out, working on the car, around the house, even sometimes when I go out on a short photo shoot or walk in the bush. The AN-J-3 was hot water treated and worn till dry when I received it, its just had bucket loads of wear time; and all the more comfortable for it.

Not the light, its the way the hide is on the Werber. Colour is pretty accurate to real life (on my monitor at least). These Ultra Hides, a lighter russet shows through progressively in the wear areas, giving that mixed batch look. The more you touch or 'work' an area the more the lighter russet is revealed. You can see it on my left shoulder where it gets a beating mostly with the straps of my work backpack as they go on/off and jiggle around. Unfortunately they are no longer available, but the Liberty HH of my wife's Duke (initial pics) do show the same lighter russet wearing through.