As I said, sorry I'm not berating or trying to rain on anyone's parade and I've even praised Platons Dubow plus I'm the first to admit the usual suspects top end jackets are without doubt we'll overpriced IMO these days yet, they still sell and get snapped up pretty quickly when sold used. All I really was trying to suggest was that I doubt these low budget producers will ever see the subtle nuances in 'maker ' styles because accuracy is probably not their desire in the same way it has been for the big boys whose time, effort and research (and desire based on personal interest) has/is still clearly paying off for them. However, for those who are happy to buy a 'less faithful' repro then you pay your money you takes your choice and again I don't say that as a put down, but even at at the keen prices offered I get the impression it's a gamble what you'll end up with. I very much doubt we'll ever see any of these budget jackets in years to come being mistaken for an original like some ELC's and GW's have.

Do wanna be one of those “tyre-kickers” always pointing out negatives but my impression so far is:

There is no kinda “quality check” on their jackets this is why on several G1 the zipper broke (like on mine and in Brett’s) and this is also why for example the pocket flap of mine already started to separate.

Since we have Shawn being active in our forum we have an slight idea about pricing in Pak - and due to the fact Shawn also needs some profit for his staff and himself with a bit of math we might estimate the manufacturing costs for such a jacket. AVI simply takes their purchase price in double with some extra and we pay for it.

Bottom line again:
In the very beginning I was highly satisfied with my AVI G1 1st generation which ended when the zipper broke and in return they sent me a completely different jacket (shorter collar, different leather graining, etc etc etc) and when I asked them for one of the initial production run they just claimed the new version is better which did not work out for me.

I do not wanna dump a sh.. in anyone’s garden but for me AVI is outta my further consideration when thinking about ordering a new jacket.

Looks like AVI needs to try a bit harder. Shame .
I have an AVI Russet Goat A2. Haven’t had all the problems Thomas has had, but if it should happen to my jacket I’ll definitely keep you all advised.

Yes, it can't be easy... Fair points above. But at least they are trying.
I remember back in 2001, my first ELCs... They were baggy, drooping shoulders, floppy knit, two identical size RWs were quite different in fit. I had to order a size down, 38s, but they were way too short. ELC has come a ways since then, pattern updates, better leathers and knit etc... Plus, I've heard of a few broken zips on ELC jackets... Not all the hooklesss ones (I almost broke an HLBs at Duxford last year)... I had a GW arrive after 1.5 years with sleeves 1 inch shorter the Id ordered. Granted John took it back, but I was left without a jacket. Even Aero, I've had a great 15142, a Bronco which had a pocket fall off. Another with lopsided collar and another which arrived totally wrong hide. If these 'big' guys can make oopses, why not AVI? Its not like they are charging $1000
Their first supplier, 'copied' their original jackets (as best as those guys knew how) and gave the patterns out all over Pakistan Bet they didn't plan for that.
Shawn's jackets look very nice, well made and neat for sure. And for the price, well-worth a punt if you're up for it.
But AVI were the guys who bought the original vintage jackets that all these patterns came from. With the intention to make a decent original maker repros, something I've been hoping for for years... And they found a way to make them at an affordable price. But theres a learning curve, exactly as mentioned above. These guys in that part of the world have skills, but there are nuances and detailing they need to learn to make these jackets properly. Skills the UK and US guys have taken decades to learn themselves...
I still have my V1 Bronco, I love it. Although its missing some detailing, its a great Bronco repro.
My first gen G-1 is my go-too cool weather jacket. My zipper did not break, but the puller was on the wrong side. I replaced the knit and had the zipper puller placed on the correct side, and wallah! I love it. Its looking superb, the grain has really popped out and its wearing in very well.
I believe there is a 'new' supplier who is making the horsehide Perry, I also know they are upgrading the knit parts, because thats always been a bug-bare for me...
The new Bronco? Well, I have not yet seen it. At a glance it looks like the previous version (which was nice enough)... I wish they'd used an olive drab thread and lighter knits, but lets see once jackets in hand. I agree that they should do this in horsehide also. Maybe they will.
In any case, gotta start somewhere and at least from my experience, the jackets are good... Not perfect. Yet. But they do seem to be motivated to improve. They're still around... and have certainly invested a lot already.
I am sure there are some who would sleep better if AVI left the scene. I for one hope they don't... We need them, and Shawn, and Platon...
Support where you can. Let them know your issues, so they can improve...
Last edited: May 1, 2019

Seen it from this perspective you are right Brett

Brett
Well said ....I for one would never want to see a new maker shut down his tent and leave. As I mentioned ,I have not experienced any issues with my 1st generation AVI Bronco . The only thing I didn’t like about those first Russet jackets was the orange color, but I was able to sort that out with a minor amount of effort. The jacket looks good now as you can see below. 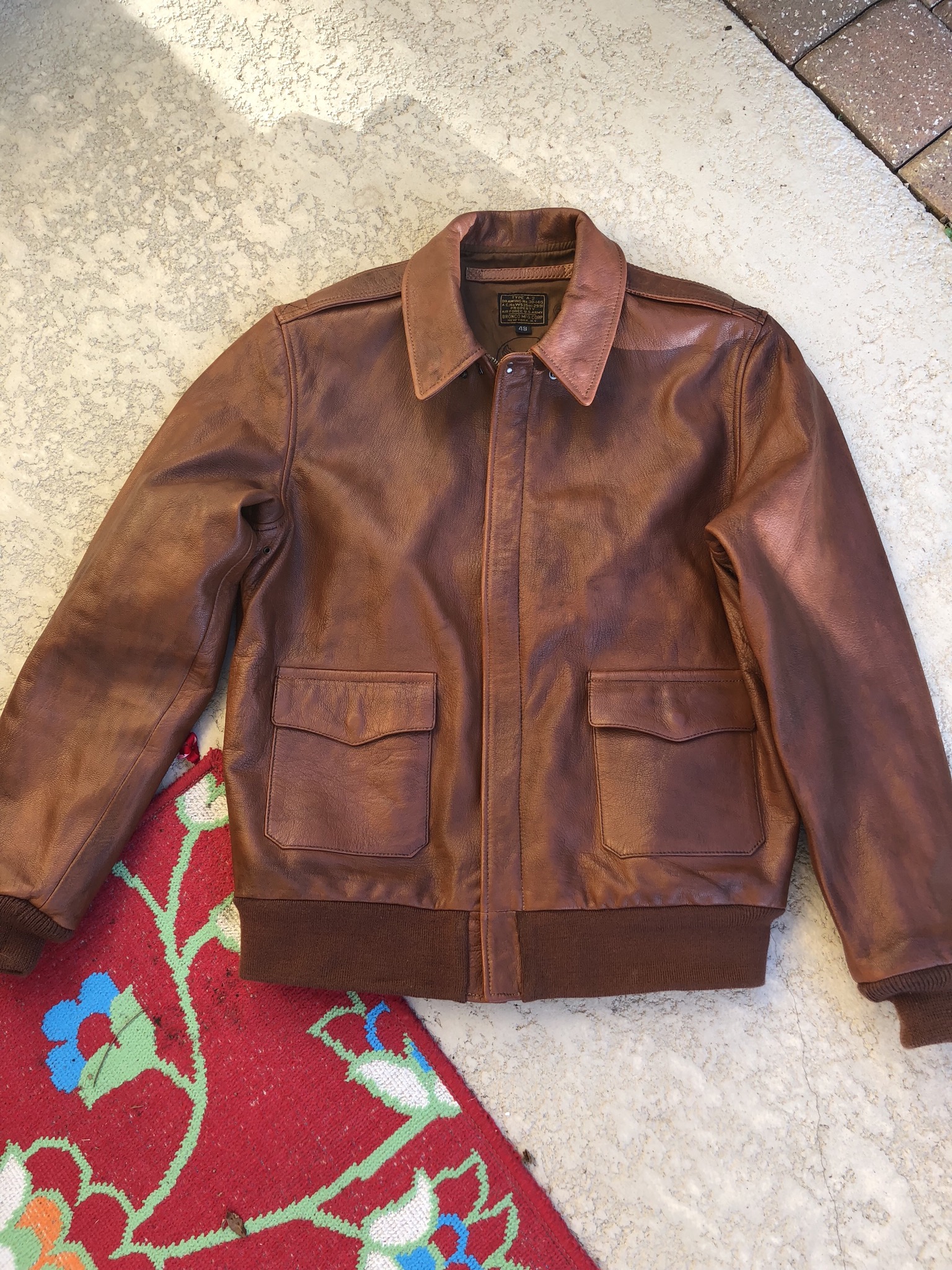 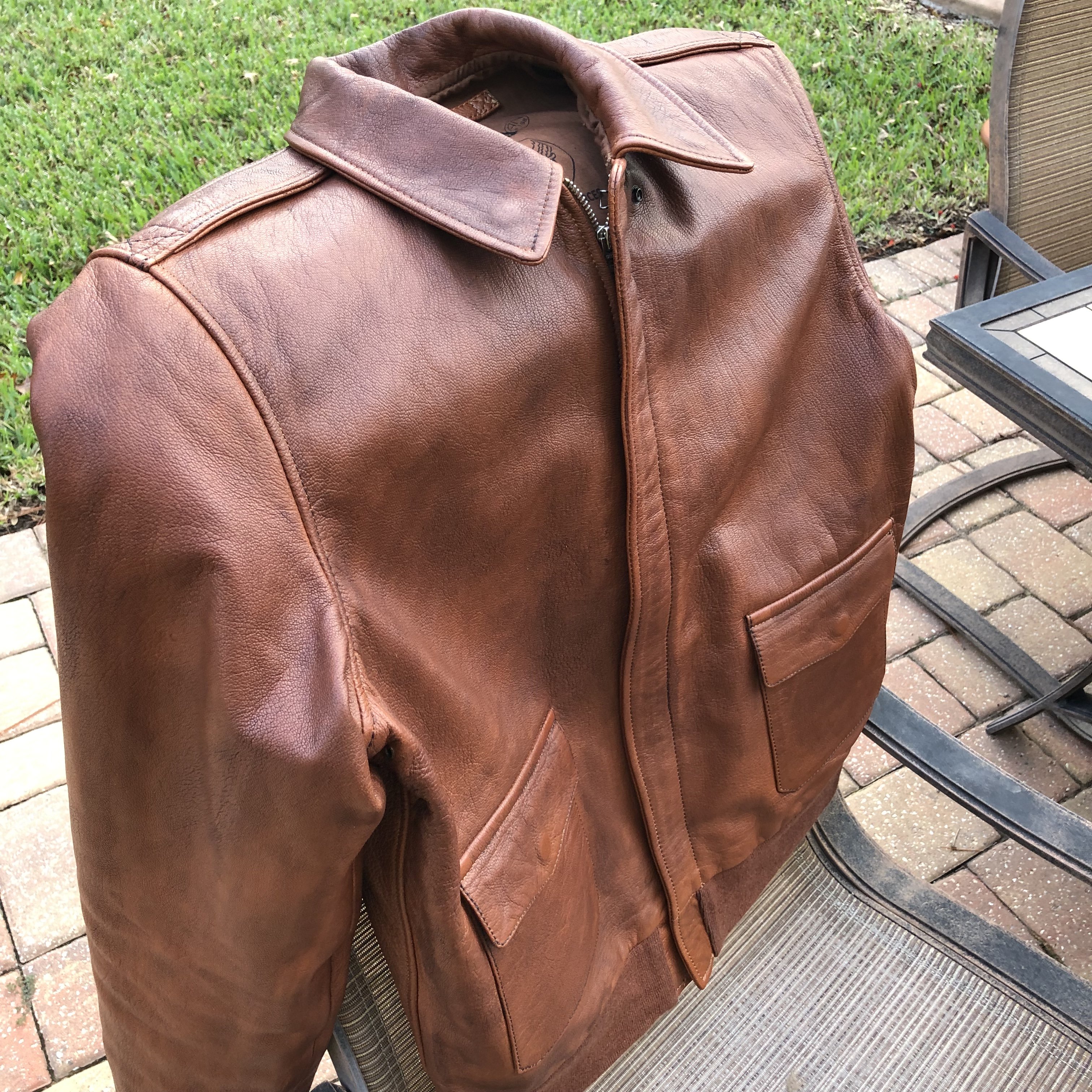 One suggestion that comes to mind would be to replace the zip puller that they are currently using. I don’t know if anyone else has experienced this,@ but the puller flops over and gets locked out of position occasionally making it difficult to unlock. AVI could fix that minor flaw in a heartbeat by reducing the amount of play in the attachment end of the puller. 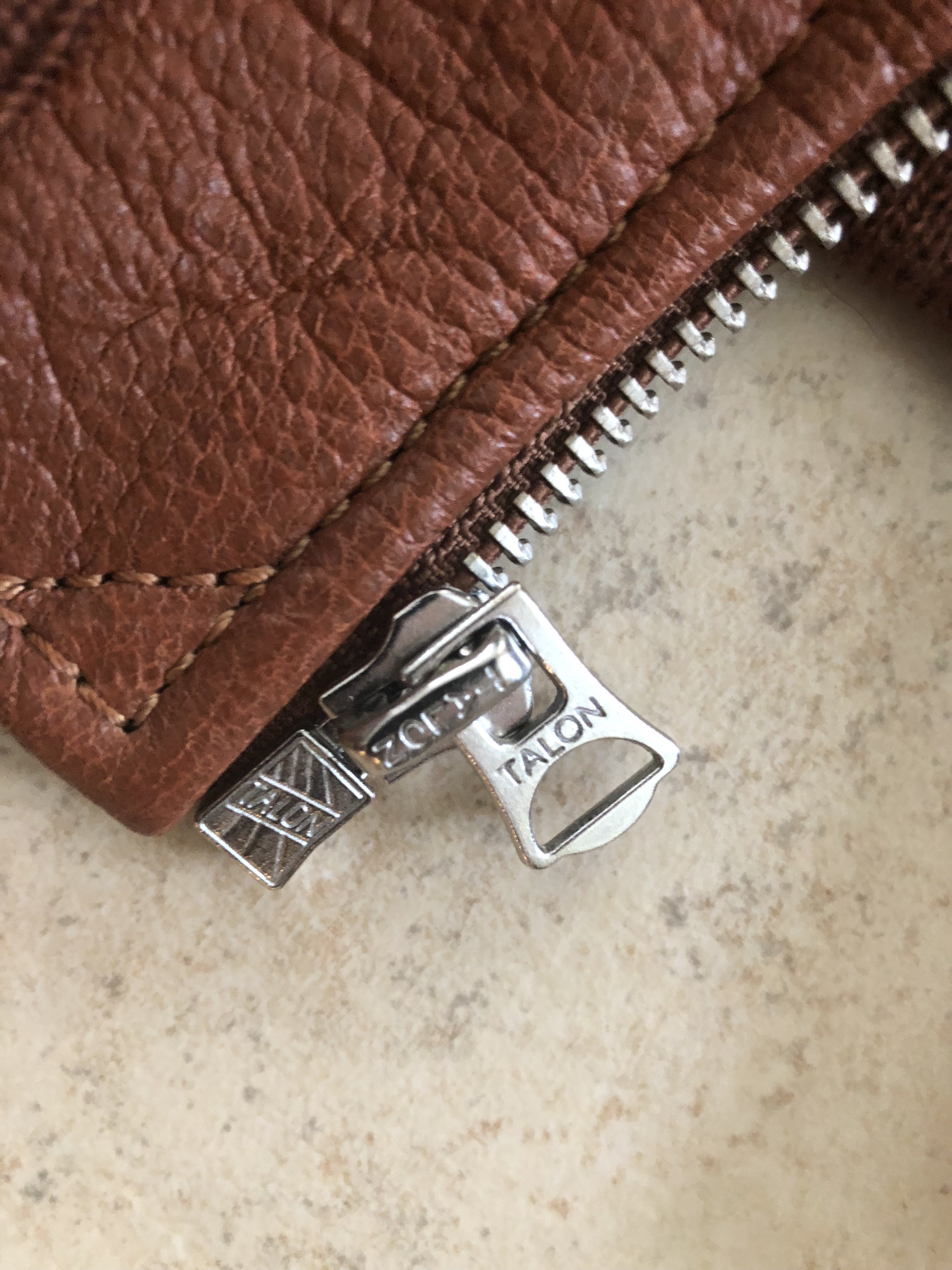 This is the issue....
That’s all I’ve got!!
Hope AVI is listening.
Cheers
B-Man2

Brettafett said:
Actually, I get that with my G-1.
Your Jackets looks amazing....
Click to expand...

Brett
Thanks for the kind words.
Cheers

Bryce
Great looking original Bronco!
Constructive criticism is good for everyone. It helps the makers improve their products and benefits the consumers, that being all of us !!

Personally, I think constructive criticism is a good thing. It will help them improve. Slagging off is another story...
The new batch seem to have improved on the pocket flaps, but I doubt there'll be a Conmar zipper, or details like the hangtag stitching... It was said somewhere up stairs and its so true, until someone takes a jacket apart and studies the nuances of construction and the detailing, it will always be representation... Then again, thats what its supposed to be, a reproduction.
Just remember, these are sub 400 Euros.

Fair enough for the price...
The hanger and collar stitching/shape...hmmm...surely can be done/improved without busting the budget...IMHO....
Accepting that the Crown zipper in an issue for the 400 Budget... ( for GW and Aero.. another league I am aware of it...but they have it correctly).
Last edited: May 1, 2019

Yes, agree. Maybe their original has different construction, maybe they have just not noticed that detail

Bryce
If it’s ok to ask, where did you ever find original WWII NOS knits? ( I’ll understand if you’d rather not publicize that info)
Cheers

B-Man2 said:
Bryce
If it’s ok to ask, where did you ever find original WWII NOS knits? ( I’ll understand if you’d rather not publicize that info)
Cheers
Click to expand...

Nonono... In Korea and Japan on flee markets and antik markets... will cost you an arm and a leg ( not mentioning the journey) but they have them...God and the new “Kaiser” knows from where...but they have them...also WW2 zippers and United Carr snaps... ( bought approx. 2 pounds of the last of all series and kinds a few days ago)... JC wont sell one by one if needed...he knows why...extreemly rare...as WW2 NOS.
Very handy to bring back to life some old skins...with defaults.

That’s a pretty smart move on your part. It’s amazing that someone had the foresight to rescue all of this stuff and preserve it for all of these years. You must have been pleasantly surprised when you found these items . I could look forever and never bump into stuff like this here in the US.
Damn stepping all over Brettas thread .
My apologies ...

B-Man2 said:
That’s a pretty smart move on your part. It’s amazing that someone had the foresight to rescue all of this stuff and preserve it for all of these years. You must have been pleasantly surprised when you found these items . I could look forever and never bump into stuff like this here in the US.
Damn stepping all over Brettas thread .
My apologies ...
Click to expand...

For my part and apologies if I stepped on someone’s toes.....sorry no intention.
Point is..US Government and US Military policy was because of big big $$$$:...from 1944 to very recently...( maybe still is...I am out of this “ circle” since a few years”) ...leave all there...lend & lease contracts...win or loss contracts ( especially for US tax payers if buyers fail to honor etc...) hmmm... ( do the outmost against communism etc.,,,)
All over SEA after WW2, Korea & Vietnam...a lot of remaining “super $$$ stuff.”... ( even and especially weapons) ..now in antique dealers and flee market premises.. ( apologies, weapons ..is a different story....).

Apologies and sorry for drifting away...no intention of stealing nor spoiling this thread...
Back to the original thread please..
Last edited: May 1, 2019

hahaha, its all good. Just shows why modern repro makers will never quite be able to get their jackets to match originals exactly, at least as far as components are concerned.
Grab everything you can carry when you find something special, I say. If ever you need to lighten your load, make closet space or some cash for your next jacket, Im sure you'll have buyers here.

p.s. Theres a very interesting discussion about price increases (another imminent ELC price increase) and the potential future of top-tier jacket makers on the other forum, by Charles, the US HPA (ELC et al rep), here...
https://www.thefedoralounge.com/threads/history-preservation-associates-official-affiliate-thread.75818/page-34
Exactly why we need to encourage and try support the likes of AVI...
In fact, I'd like to ask anyone who has any constructive comments to make, or pictures of their original jackets, please send them to AVI.
Its us, the fans and hobbyists who will benefit at the end of the day.
Last edited: May 1, 2019

ANOTHER ELC PRICE INCREASE???
This is the third one in the last 2 years ... what’s going on there?
Sorry again to impose on your thread Brett, but I’m shocked and taken back by this news.
You must log in or register to reply here.
Share:
Facebook Twitter Reddit Pinterest Tumblr WhatsApp Email Link