I own 6 ( six) so called “ Hartmann” jackets, all from ex WW2 owners families or granted/certified provenance. Its got its name "Hartmann" jacket because when possible, he, “Erich” wore it and was very popular in it and without it anyway... worldwide ...even after 1945....same happens with the “Ike” jacket....It was as named after... because etc...
Most of these jackets ( originals) are pre 1945- French made...Privately purchased in occupied France...in France they are called “blouson cycliste”, used by the French resistance and FFI milices and others...
I have hundreds of photos showing “my jackets “ or precicely the same make with the LW pilot sitting in the cockpit or wearing it when just climbing out after his mission or just prior a mission.
Doubt strongly the “staging” above mentioned....Surely the propaganda of every country did some staging here and there but with jackets on and off.. as mentioned here... I doubt it... sorry.
I have no photos showing Luftwaffe pilots wearing “Hartmann” jackets “in town”, since it was prohibited by LW regulations ("Kleiderordnung Dienstvorschrift der Luftwaffe") to wear none issued flying ( adorned with boards, awards.. eagle etc...) guear when in public or when in contact with civilians...Only official issued attires were permitted when going out of base ....especially during leisure time...In-flight wearing was a different story, wearing none issued guear during service was only tolerated...but largely accepted due to lack of issued alternatives.
Ref. “Luftwaffes vs RAF flying gear “ literature...two great books..but there are many others mentioning the same.
“Bubi Erich” possessed at least two “Hartmann” jackets one with rounded pocket flaps ,one with more angular pocket flaps, one with shoulder boards added, one without.
All his gear incl. his awards and issued Hanhart chrono. have been taken from him ( by GI’i) when he surendered on May 8, 1945 to the 90th US-ARMY Infantery division ....(his saying in his Bio and interviews).
A few days later, he and his group were handed over to the Soviet Army for a very long st ay ( 10 yeas +) in a russian prison/working camp. All his gear must still be in some US collectors hands or ....trashed..
He relates this plus others in his bio and interviews ( some to be seen on youtube).
I had the honor and privilege to meet Mr. Hartmann plus a few other Aces from all Nations in Fürstenfeldbruck (GAF Academy) during a reunion in 1989.
Last edited: Jan 21, 2019

Great thread, very interesting I must say. Many years back I had from my late Father a genuine Luftwaffe breast patch that was a white eagle on black backing (no idea how he acquired it) that as a kid I always thought might be off a leather jacket! I somehow lost it over time unfortunately but others have told me it was more likely from a Luftwaffe attached panzer unit crew jacket, who knows, just wish I still had it!

I am aware of the jacket being used on the Western Front, North Africa and in Italy etc. and in prewar Spain very heavily. I was hinting to its use on the Eastern Front. Yes, they did wear it off base and in cities. This is what I am referring to....trying to get at the actual facts. I have heard so much here say and very little in the way of pilot testimony. What I seemed to have gathered (just speculation) is that the jacket all during the war and 20 years post war no one made a big deal over the jackets. It seems IMO that it became a hot commodity after the war movies depicting it in the 60's and 70's when more people became more aware of it and when more people started developing an interest in WW2 history. I know when I was growing up my father and his relatives did not talk about it because it was still too sensitive a topic. And back in the 80's when I met some Luftwaffe pilots I was clueless as to what to ask them so I just sat there and listened.
Here is a pilot in off base wear. I have seen other photos also but have not looked for it. It seems that there is so much contradiction in info because of the very nature of the photos. Note the Croatian badge on this pilots sleeve. So my assumption is he is a Croatian volunteer? It seems that a great deal of Pilots did not follow these rules. This is part of the things I am investigating as to what was fact or just speculation. With most of these pilots gone it is much more difficult to find out. And when I mentioned that a few of these pilots told me things no one seems to accept this information. If you look at the overall numbers of Luftwaffe that served on the various fronts that it was a extremely small percentage of these Luftwaffe who actually wore these private purchase jackets otherwise there would be an overwhelming amount of photos compared to the Issued attire. Does anyone know what became of Erich Hartmann's jacket? The one he wore...….also has anyone noticed how many photos there are of a bunch of these pilots wearing a bunch of different style jackets...a mix of private and issued jackets? I KNOW that you guys are much more knowledgeable about these things and I have a lot of catching up to do. So bear with me a bit.

Great info Pilot (Brice) This is the kind of info I am desiring to glean.

Rory Schultz said:
Great info Pilot (Brice) This is the kind of info I am desiring to glean.
Click to expand...

Thx.
Yes the photo with the kind of "Panzer" wrap (no typical Hartmann jacket) even if a civilian jacket shows a Croatian volonteer walking in a (Croatian?) city... The guy puts himself at risk..since clearly a regulation transgression .
Would be interesting to know who has the Hartmann jackets (but traceable, since many "so called" on the Militaria markets available), plus all other gear...big question mark.
A few years back a lot of photos and documents (WW2 and post WW2) were auctioned in one of the big German Auction Houses ...apparently for and from some relatives of Erich. Guess all were legit/true... 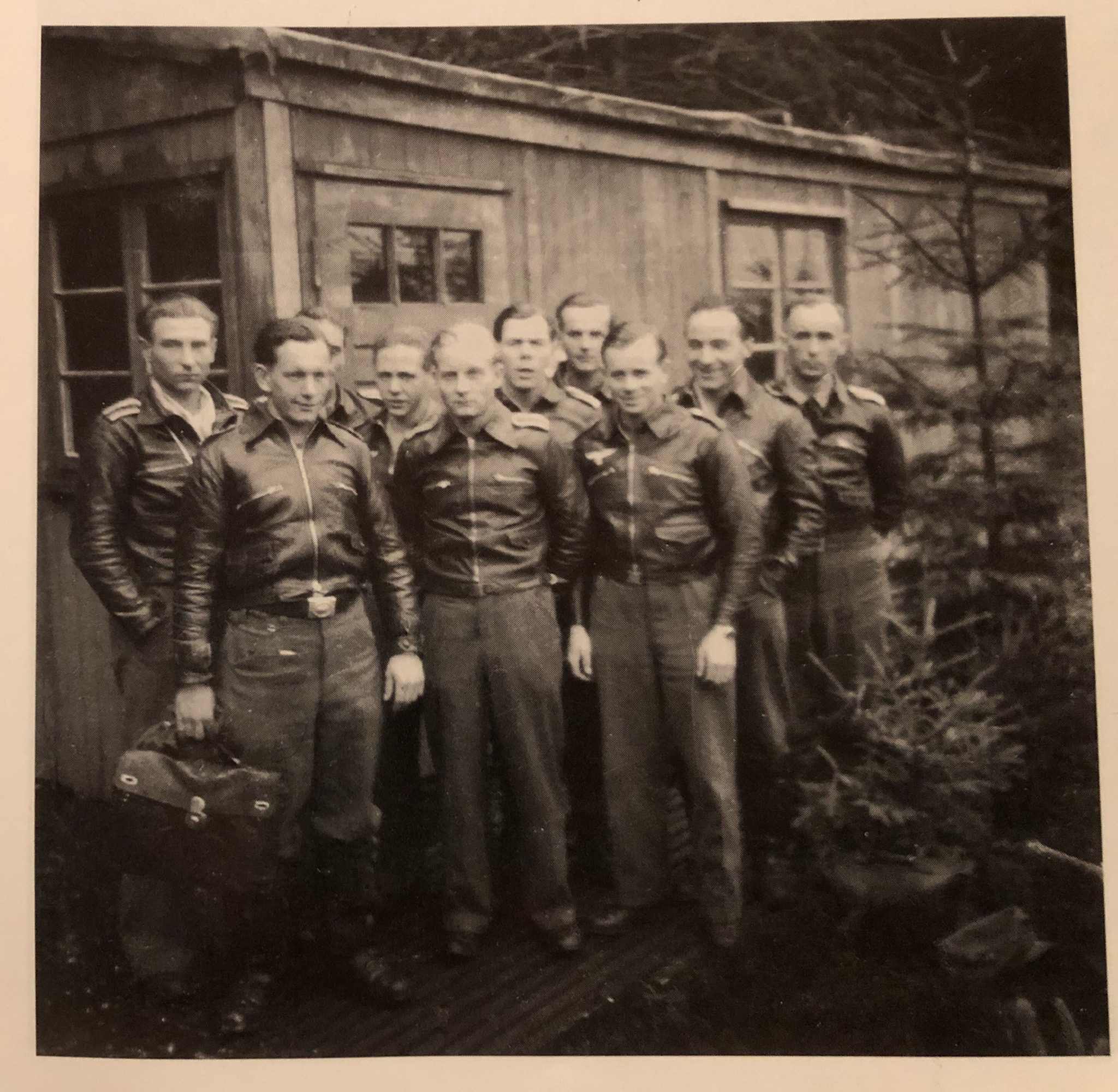 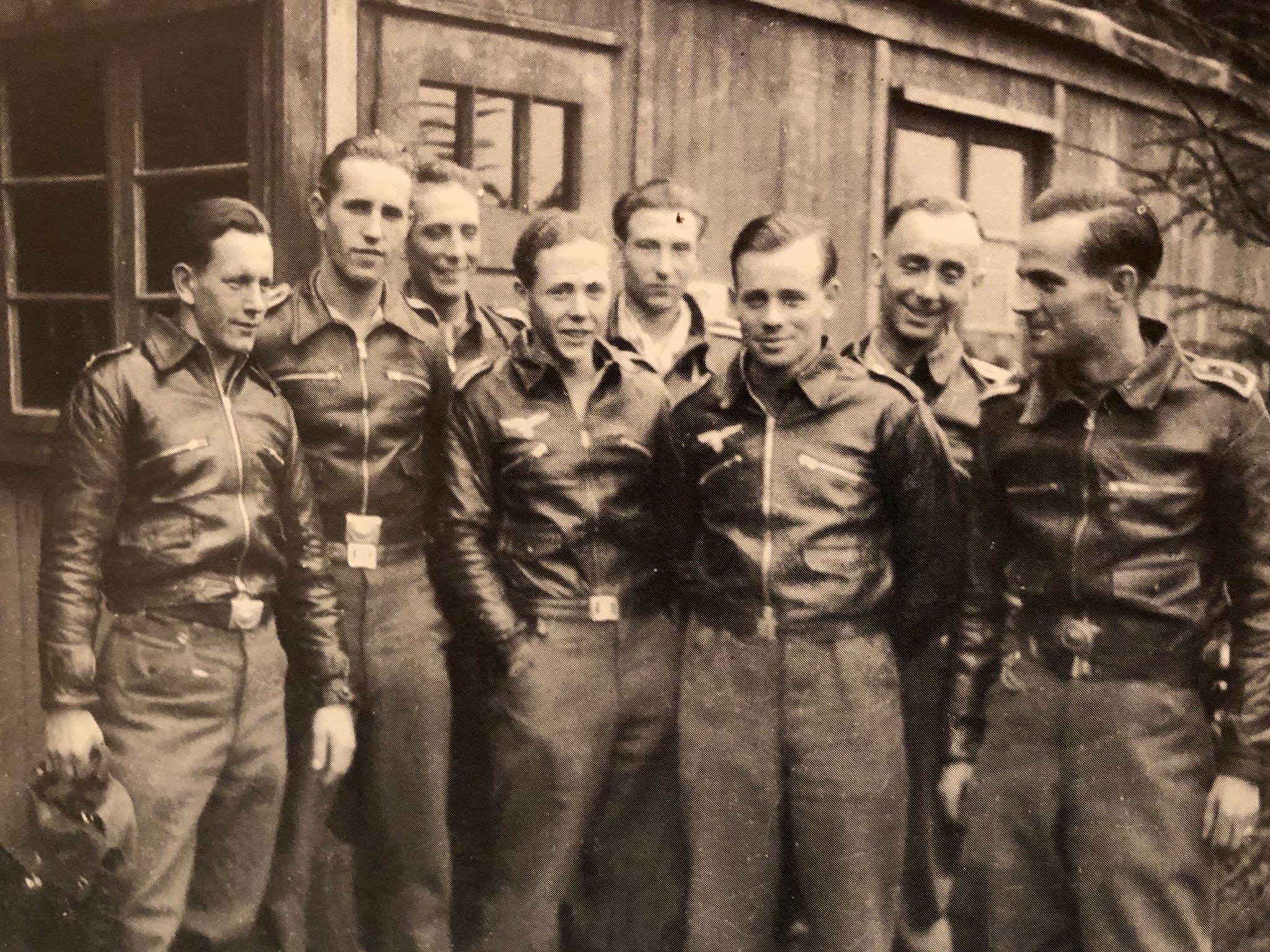 Not even the half of the bunch had breast eagles or awards on their jackets... 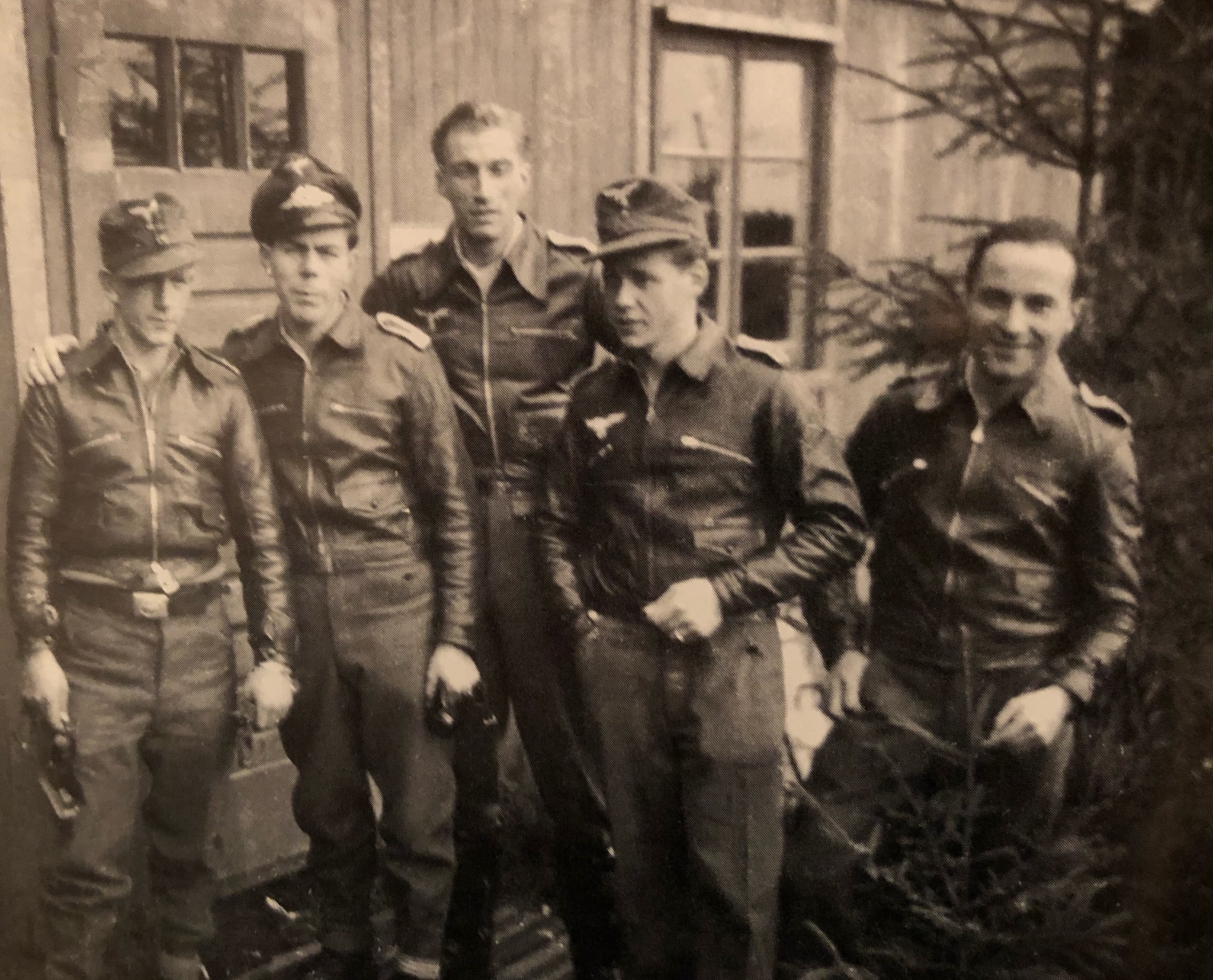 I have never seen these pics before. Nice! I would love to see a book dedicated to just the private purchase jackets the Luftwaffe used within the JG units, the pilots names, the maker and the probable whereabouts. This picture shows that there were a lot of these jackets being used by the pilots and crews.

Could the lack of medals, badges and eagle be because these men were ground crews? Or the flak crews, transport or minor roles within the Luftwaffe?

Rory Schultz said:
I have never seen these pics before. Nice! I would love to see a book dedicated to just the private purchase jackets the Luftwaffe used within the JG units, the pilots names, the maker and the probable whereabouts. This picture shows that there were a lot of these jackets being used by the pilots and crews.
Click to expand...

All pilots of the “Reichsdefence...” I have all names and units. Ground crews were forbidden ( besides not very practical for ground daily work) to wear none issued (leather ) jackets...This was a real “to merit- deserved” privilege for flyers only...Again the “ Kleiderordnung “ was very strict...except for flyers...
The book you want to see does not exist ( yet ). However, many (photo-) Luftwaffe gear reference books show a lot of flyers wearing those and other (PP ) jackets.
In the diaries of the different squadrons/units, a lot of photos as well.

What I did notice was that not a single one is wearing a Knight's cross like an ace would have worn.

Yes!, not so easy to earn a KC...was not something you just found on the street.
Also lucky for the allied flyers...A KC in 1944 was awarded after 50 confirmed downed enemy planes only.
Furthermore, the KC ( plus other metalic awards) was almost never worn in combat missions, only on dress uniforms....( except for propaganda photos).
Last edited: Jan 22, 2019

I just pulled out of storage this wartime battle used Luftwaffe Lt. leather overcoat. It is extremely filthy and I need to clean it then restore the leather. It has the ring attached reinforced buttons and dagger pocket. There are a lot of field repairs on it. It was so dirty my hands were grey from the mud all over it.

I came across this book today, does anybody have it.
Deutsche Luftwaffe, 1935-1945. Uniforms and Equipment of the German Airforce

A review of it here

I have it...excellent reference book. The best for all round LW gear and uniforms on the market so far.

I just spotted two jackets up for sale that the seller is claiming to be Hartmann jackets (French Café racers with Éclair zippers and buckle) You guys tell me if these are legit?

Now the second jacket...which looks to be reworked jacket to look like Hartmann. But you guys know about them, I don't know them.

Do you notice the zippers on the tan one is higher up than the other side?