A few of my non flight gear items on display

As seen at the Olympic Flight Museum airshow at Olympia, WA over this weekend: 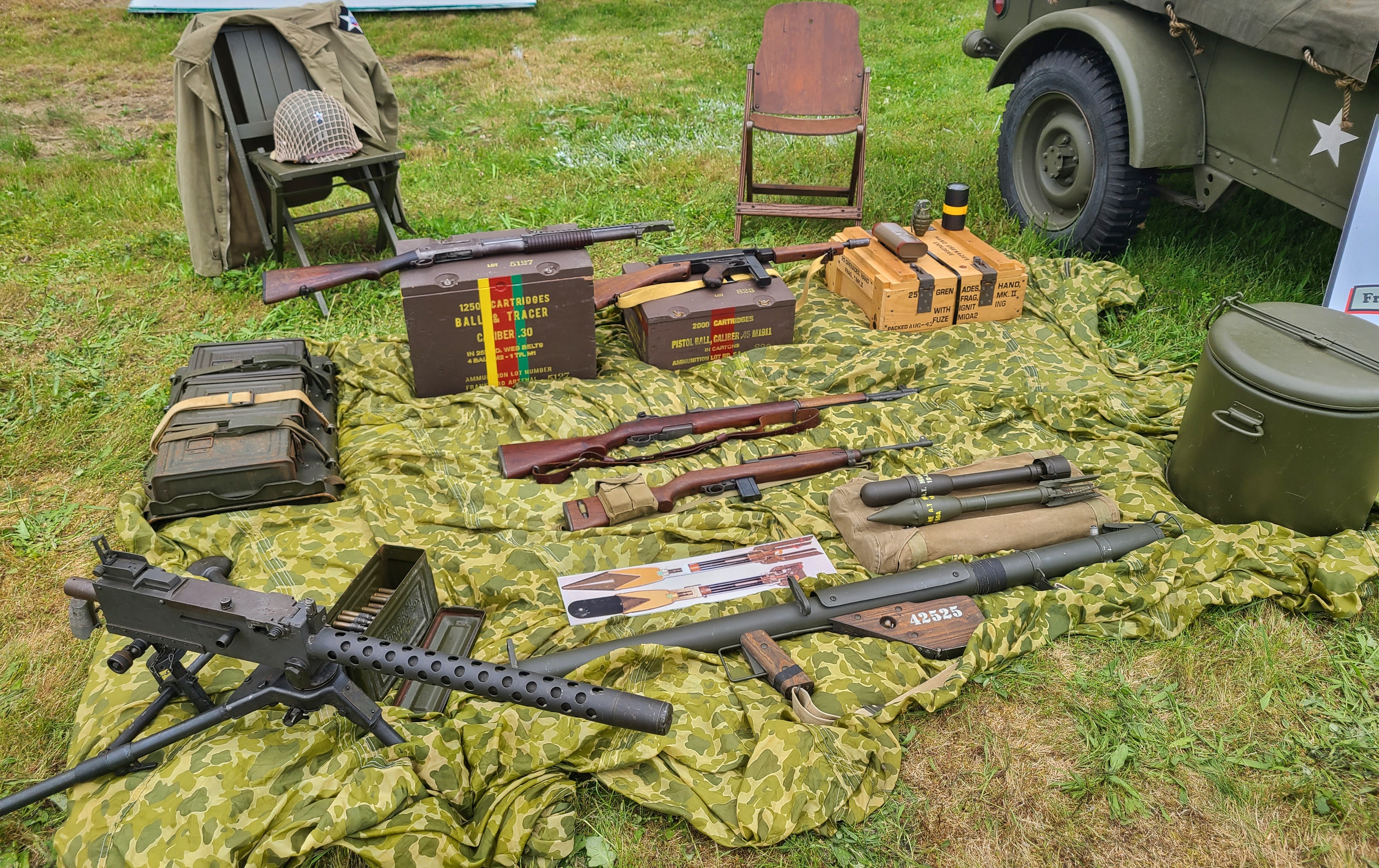 That's a pic! Amazing collection. I am glad we can't own toys like that.... I would have them all...and less kids.

The funny thing is that after the trench broom, the hardest thing to find in that photo is a M1941 mermite container (that ottoman-looking thing to the far right). Those are quite rare anymore; I'm lucky to have found two of them over the years; one has all three of the metal inserts in place. This one in the shot was filled with ice and bottled water and sodas. It's perfect for that as they're very well insulted, but equally heavy, even empty.

ausreenactor said:
I am glad we can't own toys like that.... I would have them all...and less kids.
Click to expand...

My wife couldn't have children, but in all fairness I got most of this before I was married. I also have all the standard pistols (I don't display them as it's too easy for someone to walk off with one) and all the M1903 rifle types.
If I had to get all this all over again today, I'd not have nearly the collection I have now. I started collecting in the late 80s, when most German collectors sneered at people collecting American stuff. Nobody took collecting US stuff other than weapons (and to a lesser degree, AAF stuff) seriously back then. In those days, people would say, "This is what you have because you can't afford the German stuff."
Oh, how times have changed!

Wish I lived south of the border.

Some spectator asked why I didn't bring the P17 bayonet for my trench gun. I replied each time that of course I have the bayonet for it, but didn't anna leave anything with an edge where the public might get to it. The only knife I had with me was my M3 trench knife which was usually strapped to me on his pistol belt.
Here I am on that Saturday that weekend, the day before the first photo was taken (I'd put it all in my SUV when I drove home for the night, parked in my garage so I could quickly get back and put it all back as I'd had the day before: 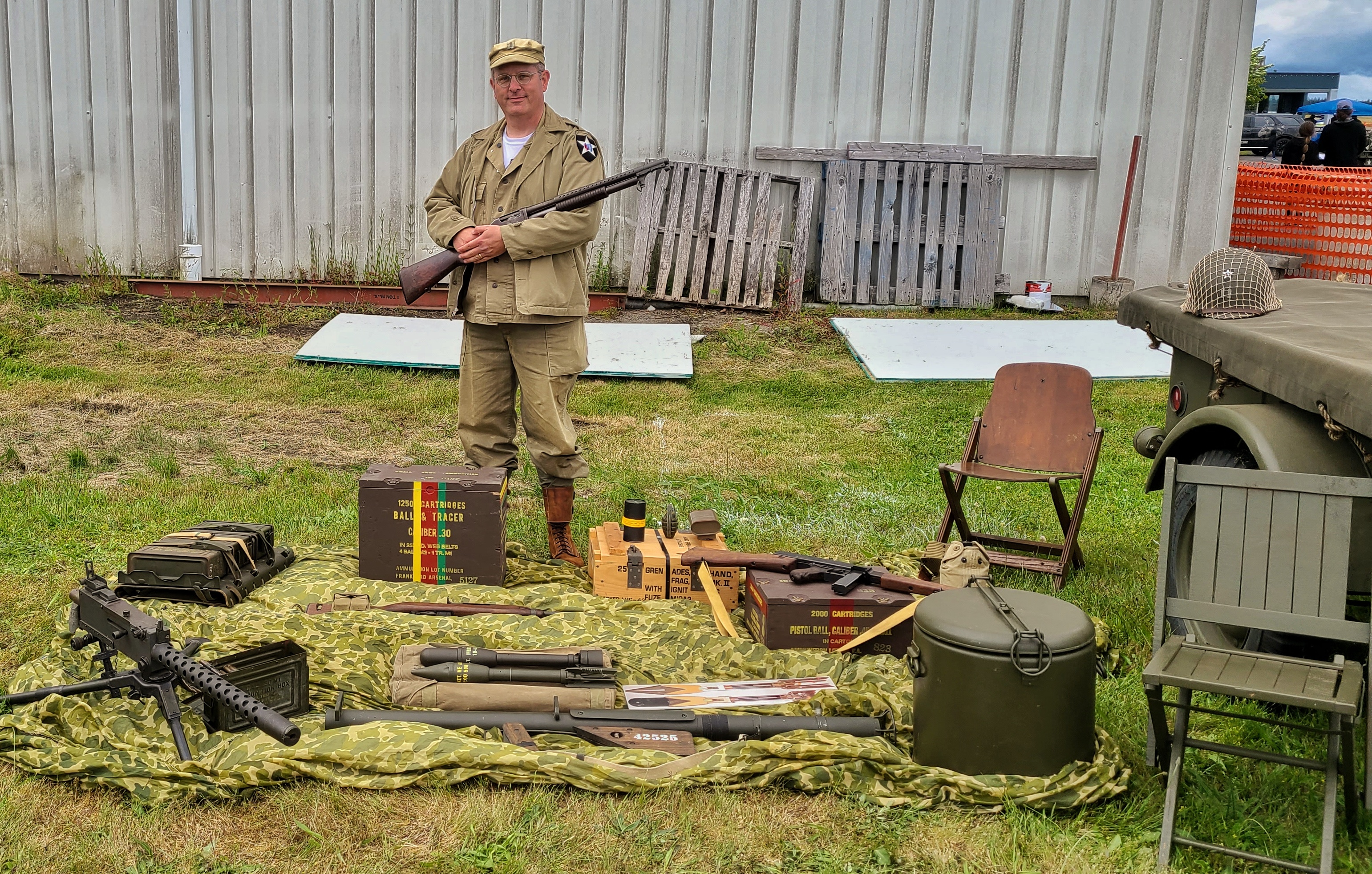 I'm wearing my badly-faded ATF HBT fatigues and what I assume is an old WPG or WW2 Impressions "M41" Parsons jacket (I'd bought it at a show, the label was long ago removed, probably sized 48, as it's awfully roomy but I got it for very little and it's worn enough that people often mistake it for an original).
Note my painted 2nd Infantry Division CPT helmet sitting on the Bantam trailer. It has an ATF net on it, as nets were common in the 2nd ID then. When I'm doing generic displays or driving my Jeep in parade and such, I usually do a 2nd ID Ordnance CPT impression, as that's what I was in real life. By late war, they were often seen in double buckle boots and HBTs, which are both quite comfortable. they're baggy as heck, though, making me look even larger than I actually am...
You might also notice that I didn't have my M1 rifle out in this shot, as I brought it the next day as so many mistook my carbine for a Garand on Saturday.
I should have brought out one of the ammo crates I have for 12G shotgun shells, as they're almost as rare as the weapons they were made for!
Last edited: Jun 23, 2022

MauldinFan said:
You might also notice that I didn't have my M1 rifle out in this shot, as I brought it the next day as so many mistook my carbine for a Garand on Saturday.
Click to expand...

Are we seeing the fast decline of WW2 aficionados?

How many of them wanted to mis-pronounce "Garand" because they've heard it was always pronounced the wrong way.

When you display to the public, it can get a little tiring. Kids who declare their videogame is correct when they're dead wrong (one game has all Tommy Guns with 50-round mags, even though you can't get the players to realize only drum mags held that much) in one that gets tiring.
Another is the type who think YOU'RE the one with no clue about anything. I call them the "This is a gun" type, who have to just name everything as if it's an admissions test. One older guy, upon seeing my bazooka rockets and the cutway 1:1 scale photos I have of real display rockets, started explaining it to me. I got tired because he wouldn't stop. I told him, "You DO get that I own all this stuff and brought it here. I was also an Ordnance officer in the Army, and I KNOW how this stuff works" and he STILL kept going. I repeated myself and he just trailed off and then walked away. A teenager standing nearby came up and asked if that happens a lot. I said it does. "That's stupid, how could he think you had no clue about the stuff YOU brought to the show?"
Why, indeed?
It gets tiring when so often, spectators have to feel that they must impress you somehow. As if I care!

Chandler said:
Are we seeing the fast decline of WW2 aficionados?
Click to expand...

Nah, we're talking about normal people, those who maybe saw a movie or two at the most. I'm always surprised how many get the stuff right.

Chandler said:
How many of them wanted to mis-pronounce "Garand" because they've heard it was always pronounced the wrong way.
Click to expand...

That, and the name "Willys" for the Jeeps. Hardly anyone seems to know it's actually pronounced like "Willis" with no long-E sound.
I don't bother correcting on the rifle much of the time. Especially since I've long ago confirmed that the vets, during WW2, often pronounced it in the wrong way.

MauldinFan said:
That, and the name "Willys" for the Jeeps. Hardly anyone seems to know it's actually pronounced like "Willis" with no long-E sound.
I don't bother correcting on the rifle much of the time. Especially since I've long ago confirmed that the vets, during WW2, often pronounced it in the wrong way.
Click to expand...

My Korean War era vet father owned a CJ-2A WillEEs Jeep. He corrected me when I thought the M-1 was a GARR-and, not a Ga-RAND (as did my WW2 vet uncles and in-laws).

I couldn't figure out what the BoB cast were talking about with mew-ZET bags -- my dad called it a MUSS-it bag.

50 round mags for Thompsons? They wish.