A quick fyi. Still haven't found the Air Corps garment drawing document "30-1415 Flying Jacket, Type A-2", but I have to tip my hat to the National Archives as they're tearing the place up to find it. From their last note ...

"We searched Publications of the U.S. Government (Record Group 287), Records of the Office of the Quartermaster General (Record Group 92), and Records of U.S. Air Force Commands, Activities, and Organizations (Record Group 342). Within Record Group 342 Entry P 26, Research and Development files we were able to locate several files related to the Flying Jacket but they were correspondence files that refer to the specification and changes and do not include drawings."

The National Archives have been incredibly helpful and most gracious in this search. I may be able to head out to look for the documents myself later this year, but to be fair I will likely have the same result. Still, there are a lot of items they have recently uncovered and those documents may shed some more light on the A-2 history. If I can't make it the National Archives has kindly sent me information for private researchers that may be able to help further.

Since it has come to light that there was a "prototype" A2 jacket
then it occurred to me that there may have benn a contract/order number for it.

This contract/order would need to contain all the specification details
of the jacket including the drawing. If the contract number was 30-1415
then the drawing could have inherited this number becoming drawing number 30-1415.

Below is a scan of a document from 1935. This was posted on the forum some time ago, I can't remember
by whom. I have circled the interesting bit. 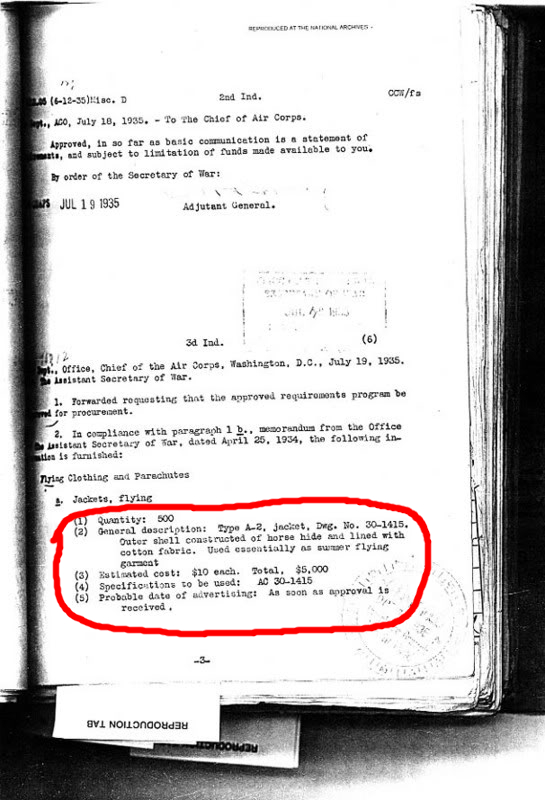 The document is for the procurement of A2 jackets and states that specifications AC 30-1415
are to be used. Which seems to imply there was a contract/order AC 30-1415.

It might be worth expanding the search for documents AC 30-1415. This might contain the drawing
as well as details of who made the "prototype" jacket.

This is interesting. The AC (Air Corp) in front of 30-1415 does not make sense. AC was written immediately before contract numbers, and when used with purchase orders was written "AC Order No......." 30-1415 is written as a purchase order, as opposed to a contract. Evidence is needed to support the implication that there was a contract or an order for jackets under AC 30-1415..

The July 1935 contract/order referred in the document was probably the Werber 36-1112-P, which according to Gary Eastman, was for 550 jackets and was placed on 13th September 1935.

AC30-1415 is listed as a specification.
To me that reads as (4) The Air Corps have approved the specifications of (Dr.No) 30-1415 for a new order to an (as yet) un-named maker for 500 pieces...........having already approved one or more previous contracts.
At the time of writing (5) it appears no date for tender of this "order" had yet been approved, or indeed, no authority as yet to even issue such a contract. Final number, therefore might not have been exactly 500 pieces?
If this order was ever placed?

This document simply shows they want to purchase 500 jackets and they're allotting $10 for each jacket. The actual price needs to be worked out with the final vendor and it is not uncommon to allocate more than is expected, so the request doesn't have to go through the approval loop again. The timing fits with the Werber 36-1112P contract that ultimately ended up at $7.12 per jacket and 550 jackets as Roughwear notes.

I've been trying to find this drawing, along with the A-1 drawing, and other items. I have found lots of variation in how items may be described and not always precisely. The term "AC 30-1415" isn't surprising, given it is the Air Corps [AC] drawing number 30-1415 and the drawing number is typically used as the primary identifier, such as the order number prefix for getting the A-1 in the April 1944 US Army Air Forces catalog below (Part No. AN6501 to reference A-1 Drawing No. AN6501). 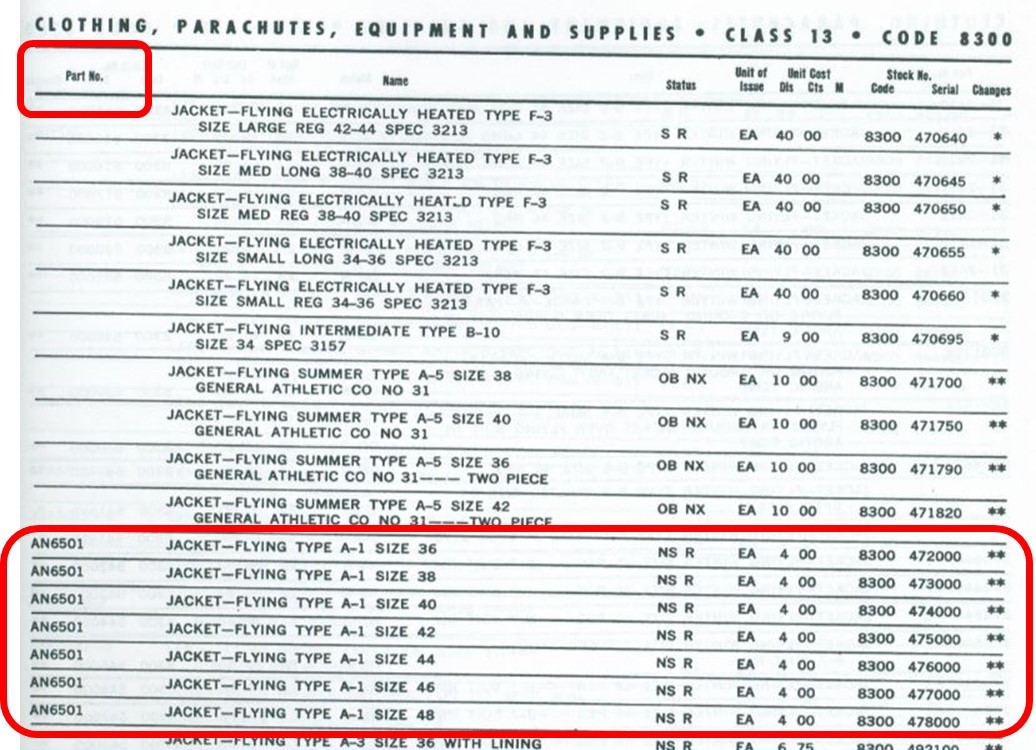 On a side note, I'm no longer certain any A-1/2 drawings are at the National Archives given our inability to locate, so I'm looking at other possible sites.

Price sounds like the A-1s were quite old stock

Somewhere back in time I must have come across this info as the date is very precise...........

"The A-1 could still be found in limited use during WWII and was finally taken out of duty on September 29th 1944, after stocks were exhausted."

Ken at Aero Leather said:
Somewhere back in time I must have come across this info as the date is very precise...........

"The A-1 could still be found in limited use during WWII and was finally taken out of duty on September 29th 1944, after stocks were exhausted."

That information is from a "Type Designation Sheet" (TDS) that was the primary source of information on flying/pilot jackets until the A-2 specification 94-3040 documentation was discovered. An excerpt is below and the complete version is in C.G. Sweeting "Combat Flying Clothing" book covered on pages 131-136. Unfortunately, the TDS has been found to have a few errors, so books using the TDS as an information source contain the same errors. For example, the A-1 drawing number is AN-6501 and not 074737, the A-2 drawing number is 30-1415 and not 31-1415, the A-2 used a cotton and not spun silk lining, and so on. 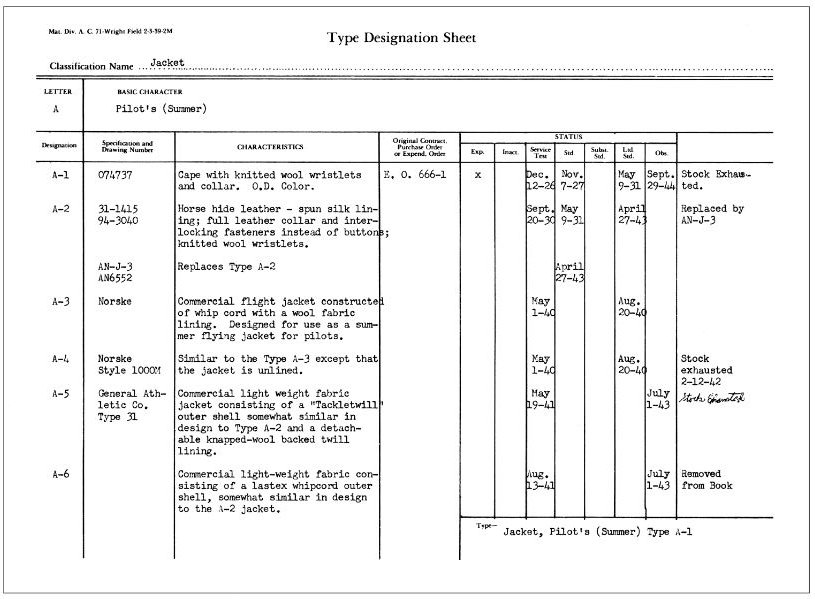 To be fair, it isn't always easy to decipher documentation unless well trained. For example, the A-2 spec below is hand dated and signed May 9, 1931, but the document is typed as approved July 25, 1932. The correct answer is the hand dated/signed date of May 9, 1931 and that is accurately noted on the TDS, though general availability may be later as the items need to be procured before release. 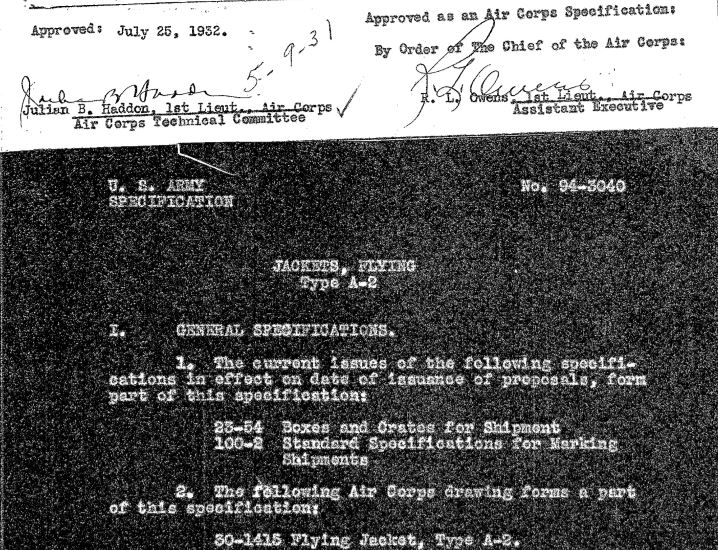 From someone at the time a general guideline (not a rule) was that a paper page may contain up to three (3) errors before needing to be re-done, given the time/effort to re-type. Hand mark ups would suffice otherwise and that is seen on a number of documents at the time.

Unfortunately, no luck yet. It’s not in the top archive locations, so I’m going down the paths that it may be classified (as was the A-2 specification) or at another location(s), such as Wright-Patterson. If I find something I’ll post it here first.

Time for another update...any luck with your search? I find this whole thing fascinating.

The next question is, do we really want to find the original drawing?

The spec for the Navy 37J1 cloth jacket turned up awhile back. It showed a 2" chest to waist drop. Very unfashionable for the skinny workwear trend, the only reason that jacket is reproduced today.
3

zoomer said:
The next question is, do we really want to find the original drawing?

The spec for the Navy 37J1 cloth jacket turned up awhile back. It showed a 2" chest to waist drop. Very unfashionable for the skinny workwear trend, the only reason that jacket is reproduced today.
Click to expand...

Yes. Curiosity gets the best of me.

Where was the Navy 371J drawing spec located? I've sent a request to the USAF and am waiting to hear back.