Picked up another Saddlery the other day but was (pleasantly) surprised to see that the exterior finish was not the shiny/wet look of my other Saddlery. The exterior is very much like that on the early Cooper orange-tagged jackets. In fact, my initial impression when I opened the box was that it was an orange-tag Cooper with Saddlery label on it.

I've checked the jacket over very carefully and it's not been messed with. Anyone with multiple 88-spec jackets noticed any variation with the finish? I'm assuming this contract ran for at least several years.
G

My least favorite jackets are Coop's. So, I'd love to see pics of this one
G

ButteMT61 said:
My least favorite jackets are Coop's. So, I'd love to see pics of this one
Click to expand...

I know that Butte. I'm shocked you even read this thread when you saw the word "Cooper"! :lol:

ButteMT61 said:
My least favorite jackets are Coop's. So, I'd love to see pics of this one
Click to expand...

I know that Butte. I'm shocked you even read this thread when you saw the word "Cooper"! :lol:
Click to expand...

Sorry man. After years of crappy eBay Coopers, I am just jaded :lol:

My first A2 was an orange spec label Cooper and not a bad jacket at all, the fit was pretty good and from what I have seen it has all the same spec as the Saddlery jackets including the lighter brown shade goatskin, the IDEAL bell shaped zipper and the purple-hue knits.

All in all a pretty decent jacket, I badged it up as the 334th Fighter Squadron, 4th Fighter Group, 8th Air Force.

Don't wear it at all now, since then I have progressed onto Aero, Eastman and Goodwear A2s.

Every '88 Saddlery I've ever seen had a very russet finish. The '96 Saddlerys were more seal, but still redder than the Avirex or Orchard A-2s from the same time period.

As to quality, there were minor differences between the Saddlery and the civilian Coopers I've seen. Leather was thicker in the Saddlerys. Hard wear was different, too. And, as already noted, the Saddlery color was more russet. Jason once did an excellent post comparing the two, but I think it was on an older version of this forum. I'm not sure it can be accessed here.

Here's a photo of a jacket from each group.

I just picked up a Saddlery 88 last week size 44L for 15 bucks in very nice condition, what are they going for these days? If it was 40- I would keep walking to be honest. But then again, after reading a post here on VLJ about silver zip M65's, I would have walked by them as well. Started looking at every M65 I see now and got one This Past Sunday for 30- silver zippers, 1967 MINTY! never even washed. I never thought something that seems so abundant could be so overlooked and I expect the 65 to go over 200-

I'm not sure what the earlier, new issue A-2s are fetching nowadays. I used to pay attention to them on e-bay, but not so much anymore. If they're lke other flight jackets, I expect their prices are still a bit depressed. Good, size 48R Saddlerys used to run about a buck and a half. As is the case with most jackets, the smaller ones were cheaper.

Marv- that's a good point about the purple-hue knits on Saddlery Coopers. I thought they all had them until I saw one with the mid-brown knits like an orange label A-2. I have an orange label Cooper with the WWII Commemorative khaki lining that has a grey tint to the knits. Since Cooper was manufacturing their military contract jackets concurrently with the civilian A-2s there were probably times that they used whatever knits they had on hand. You also mention your orange label A-2 was a lighter brown goatskin like the Saddlery version. That's not the norm- but I had one like that as well. Once again-variations exist.

Those collars are truly dreadful.

I'm fairly certain the early orange-tag Coopers pre-date the USAF Saddlery jackets by a few years. Aside from being a slightly different color/finish, the Saddlery is the same jacket. Hardware, knits, cut, fit all appear identical.

Jason did an excellent review of the early orange-tag Coopers vs the later version. I threw in my 2p on the early Cooper vs 88-spec Saddlery.

Here are my two Saddlery jackets with one of my early Coopers. The first photo shows my issued Saddlery with the shiny/wet finish. Center jacket is my BX-purchased Cooper (~1983/84); and the right-most jacket is the Saddlery I picked up the other day. I changed the jacket order in the second photo so the two Saddlery's were side by side. The lighting probably doesn't show the difference as well as seeing them in person but you can see the finish of the middle jacket is far closer to the Cooper than its Saddlery sibling.

I suppose I represent the minority here as I am a Cooper fan. I've spent years and thousands chasing the mythical perfect-fitting WW2 A-2 repro. Ultimately, I moved them all on and the Coopers are still here. For whatever reason, despite their historical inaccuracies (and IMO the Coopers were never marketed as repros), they remain my best fitting A-2s. 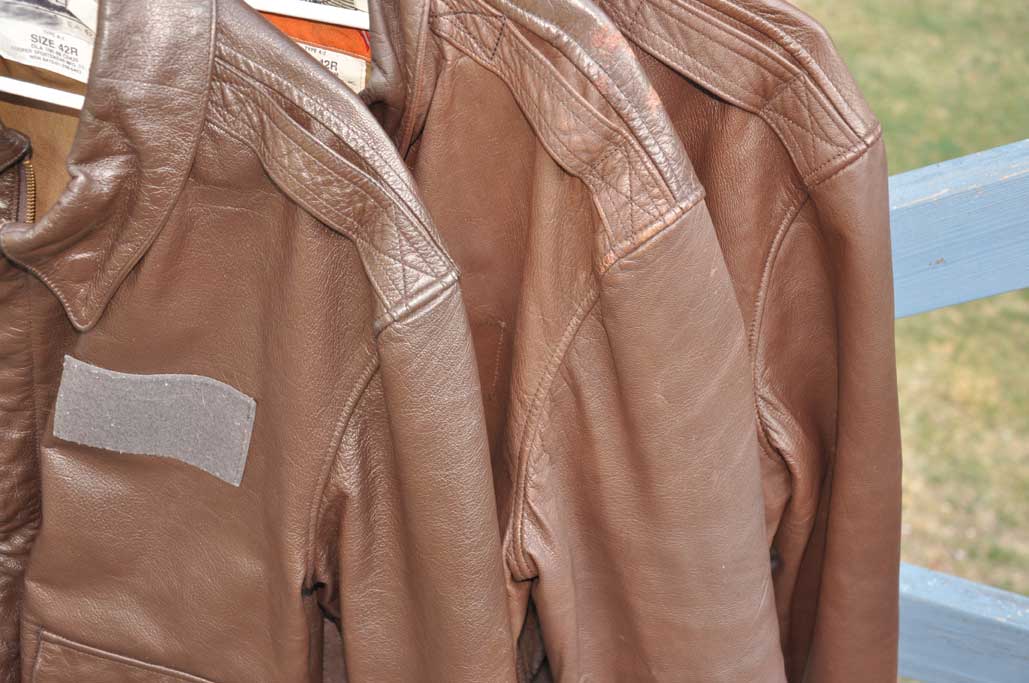 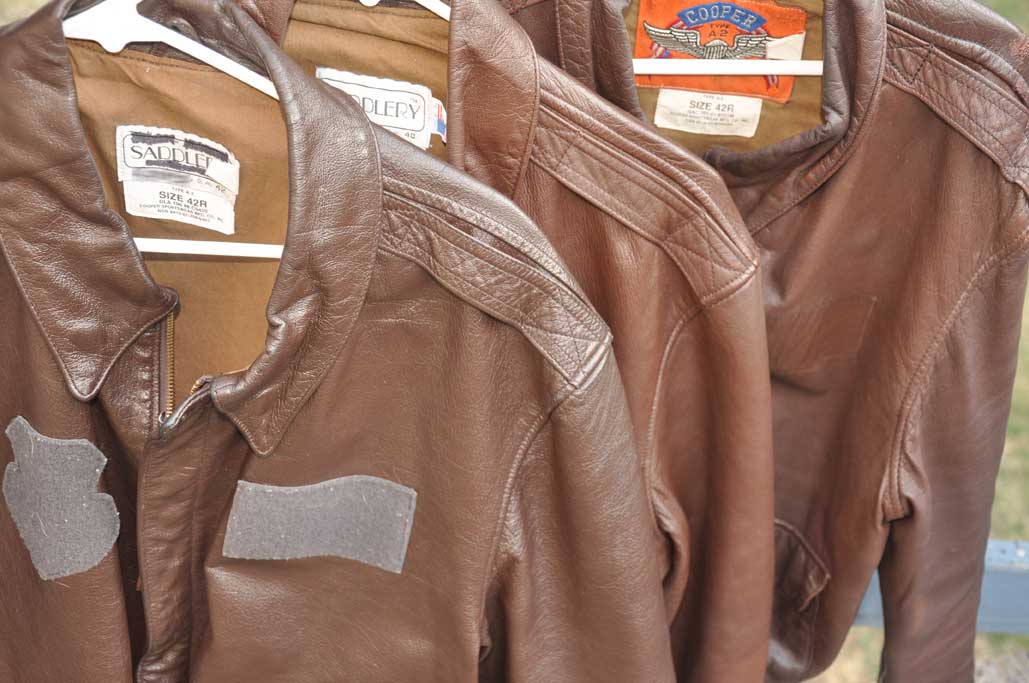 FtrPlt said:
Jason did an excellent review of the early orange-tag Coopers vs the later version. I threw in my 2p on the early Cooper vs 88-spec Saddlery.
Click to expand...

I'm pretty sure Jason compared his '88 Saddlery to a civilian Cooper. I remember helping him look for a Saddlery to buy. He was specifically looking for an '88 as opposed to the '96 version, and he ultimately found one. And I'm not sure of his Cooper's date of manufacture. Truthfully, I don't know how to date civilian Coopers, although I know they were produced for a long time and there are differences in their "spec tags". Maybe one of the mods can find Jason's review and tack it onto this thread...hint, hint...Bill?

Yep, You're right. It was a Saddlery vs the later orange-tag Cooper.
http://www.vintageleatherjackets.org/viewtopic.php?f=5&t=8007&hilit=Saddlery

I had added on some comparative info on the early orange-tag Coopers (purple-knit variety) vs an 88 Saddlery.

Insofar as I'm aware, there is no way to date the orange-tag Cooper A-2s. There were changes to the wording on the orange tags and the pattern changes on the later Coopers are very apparent (brown-knit variety). All bear tags for Cooper Sportswear (including the Saddlery jackets).

The Cooper variations I recall seeing:
1. The very early orange-tag jacket. There were only a few lines of info on the label and the jacket had velcro for a nameplate. Purple knits, Brass zip with chrome Ideal puller, etc. These pre-date the USAF Saddlery jackets.

2. A jacket exactly the same as the above but without the velcro patch. Same two-line orange label

3. Same jacket as #1 but with a much more wordy orange label referring the USAF A-2 jacket. I presume these to be post-1988 jackets since they allude to the USAF A-2...

4. The later brown-knits Cooper A-2 Jason described in his comparison.

I look at the Coopers as either purple-knits or brown-knits. My purple-knit jacket is pushing 30 years old with no issues -- bulletproof. I don't own one of the later, brown-knit jackets but based on Jason's review, I'd say they're inferior to teh early versions.

If YOU like them, then it's a good jacket!
I have a USWings "A-2" in antique cow hide that I love. I thought I'd get rid of it when I was cleaning out the closet (to add more of course) and I could not put it out. It's not accurate, but I love the hide and the look/feel. Things we love aren't always based in rational thinking...

I used to be sort of a voice in the wilderness here when it came to the new A-2s. Many folks on the forum back then openly snickered at them because they were cut so differently than the WWII jackets and because they weren't "authentic reproductions". My thinking was (and still is) that the new A-2 isn't a reproduction of anything. Its just a real A-2...plain and simple. In fact, it is more real than the most accurate Good Wear, Eastman...or whatever. To my knowledge, there's never been a combat sortie flown by airmen wearing Eastman or Aero UKs. But there's been plenty flown by airmen wearing humble Avirex and Saddlery jackets.

Agree completely in that the modern issue A-2s are true military jackets whereas the best of the WW2-era repros are not (amazingly accurate adherence to WW2 patterns not withstanding).

My curiosity still remains with regards to the finish on the early Saddlery A-2s. Clearly my example looks far closer to the orange tag Cooper than the Saddlery I received in 1992 (88 contract).

In any event, the jacket I just picked up is a perfect fit.
G

When the leather A-2 was reintroduced in the late '80s, any of us in my squadron would have been happy to be issued one. (I was not on flight status, so was not authorized one.) It was a big deal after years of blues and green fatigues. The Cooper A-2s have a significance since they were the A-2s during the time we served in the USAF. When I started flying private in recent years I most often wore a Cooper. They block the wind when you're out doing preflight and are comfortable in the cockpit. I didn't have to worry about scratching or snagging it on something since I didn't have much money invested. When it was colder I'd pick my Branded/Orchard from the '92 contract as it is a bit heavier. If I could afford one I would order a Good Wear. However, even then there would be days I would reach for a Cooper.
__________________________________________
Tom

I've mentioned the irony of these jackets we covet and comparing them to anything issued during WWII. Can't imagine anything that nice was ever issued, even though times were different and there was pride in the effort and products created for it.
My only reasons for not liking the Coop's is the color of the hides and the (apparent) thinness of them (from photos and in person). They just don't "grab me" like others do.
I'm not a stickler for "authentic", however, if I get one and it is also close, that's cool. I love the look and feel of the A-2, A-1, and G-1 series of jackets. I like a good hide. I like rich colors. I'm happy we all have different tastes. It'd be pretty boring if we all bought/wore/posted about one lousy jacket maker!
You must log in or register to reply here.
Share:
Facebook Twitter Reddit Pinterest Tumblr WhatsApp Email Share Link